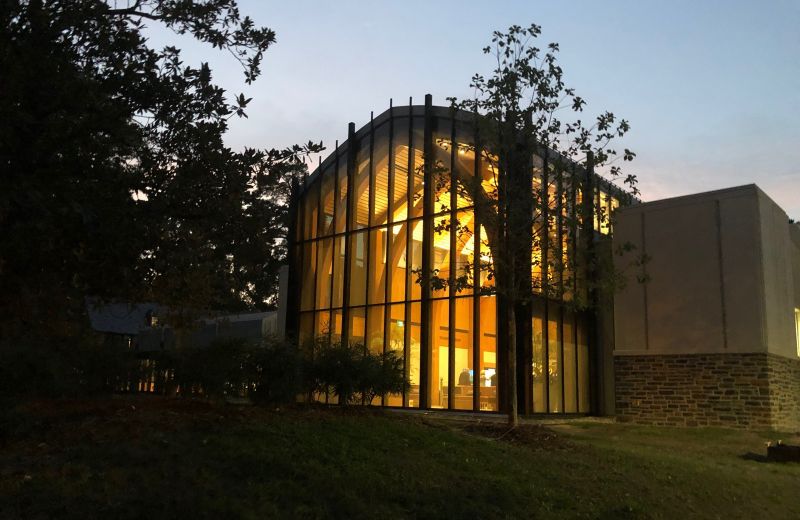 The events pavilion at dusk, by Mark Simon. 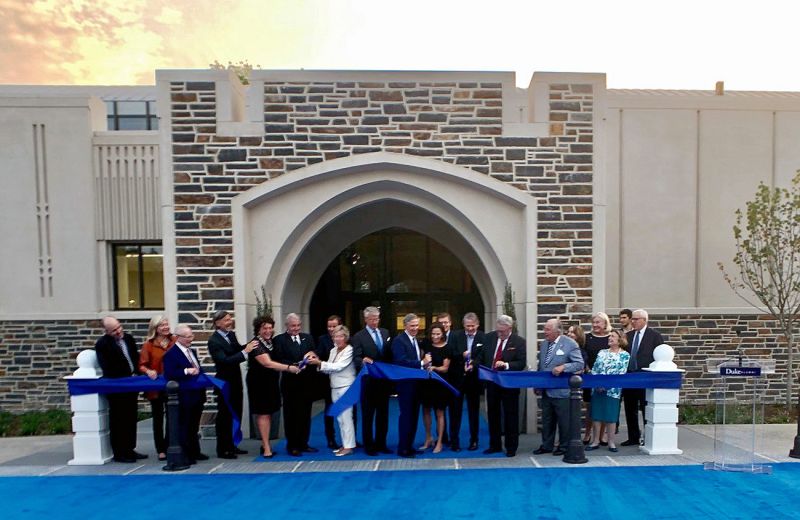 Serving as the university’s new “front door,” the 48,000-square-foot complex is highlighted by a central arcaded courtyard, surrounded by a large events pavilion with an attached, smaller meeting pavilion, a two-story office building, and the renovated Forlines House. Each has its own size and nature, making the whole like a small village.

Named in honor of former Duke Trustee Bruce A. Karsh ’77 by his wife, Martha, the Karsh Center will be the first landmark visitors see when arriving at the university, the official starting point for campus guests. The Karsh Center will provide prospective students their first impression of Duke, while refreshing the memories of alums who gather at Karsh during reunion weekends and other events.

“What I love about the Karsh Alumni and Visitors Center is that it is both a destination and a jumping-off point for your personalized Duke experience,” Scott Greenwood, chief operating officer of Duke Alumni Association, said in a Duke Chronicle article.

Potential uses of the pavilions and the new quad, are boundless for the entire Duke community, new and old. From board meetings, to impromptu gatherings of old friends, to simply dropping by for a snack and a book.

Centerbrook Principal Mark Simon, FAIA, who designed the Karsh Center and attended the grand opening events, said, “It was so rewarding to hear everyone from donors to administrators to students saying that they love the place. Our long collaboration made it, as they requested time and again, ‘distinctively Duke,’ rediscovering the campus character in a modern building.”

Centerbrook has scheduled an architectural photo shoot of the Karsh Center for later this fall. In the meantime, you can preview of the building through the following Duke resources:

We held our annual reception for graduate students and faculty of color yesterday. It was our first event in the new Karsh @DukeAlumni and Visitors Center. Gorgeous venue, great event, wonderful people! See more pictures at https://t.co/3lQUQAugut. pic.twitter.com/LWsZuwQa8c

Grand opening of our Duke Karsh Alumni and Visitor Center last night. We are very proud! Everyone down here is delighted. pic.twitter.com/JPd5SvZYZ5