A Home for American Impressionism

At the Florence Griswold Museum we designed a building for housing the art of a very special group of American Impressionists. So we wanted to create a memorable contemporary structure but one that would honor the extraordinary history of the site. 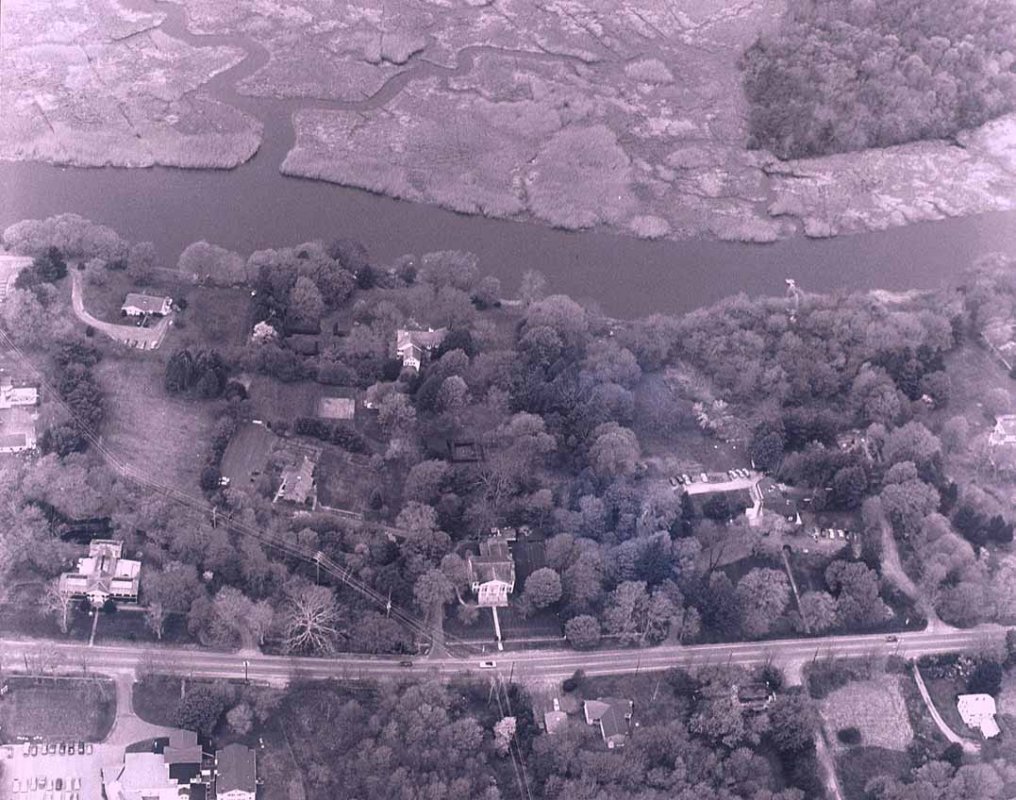 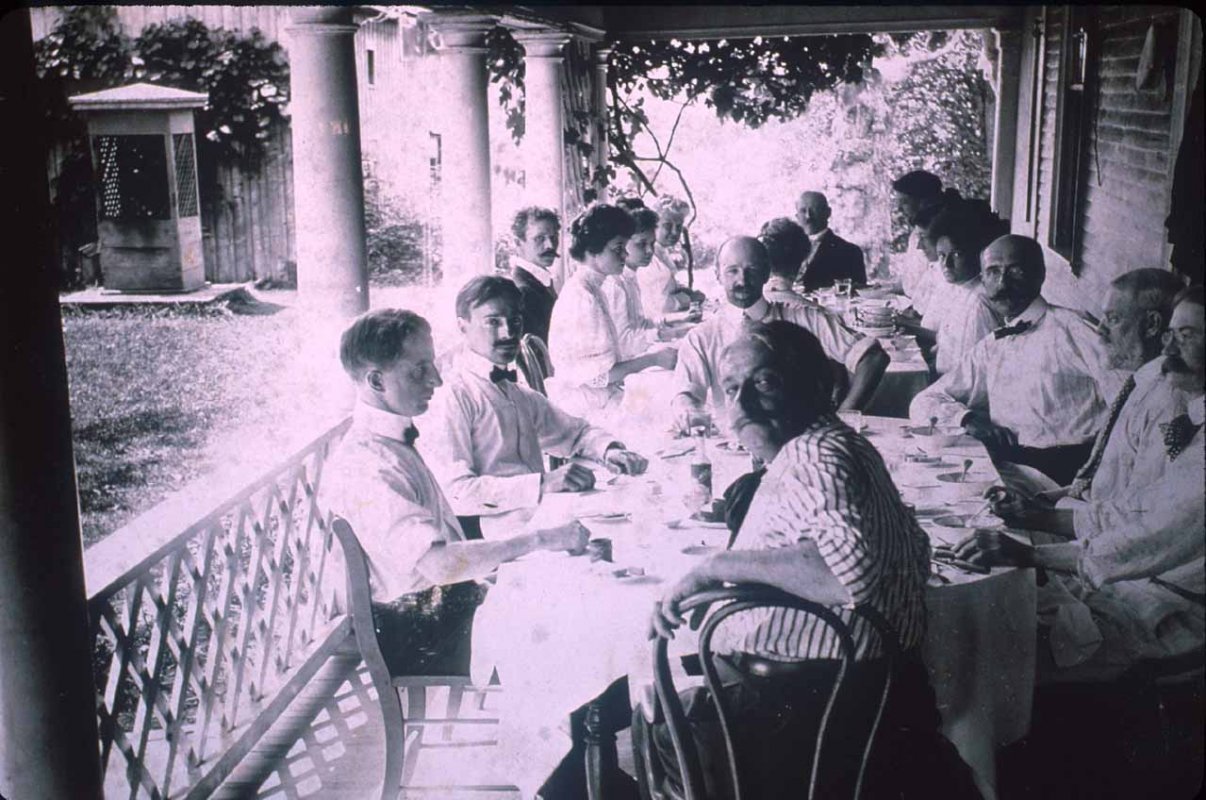 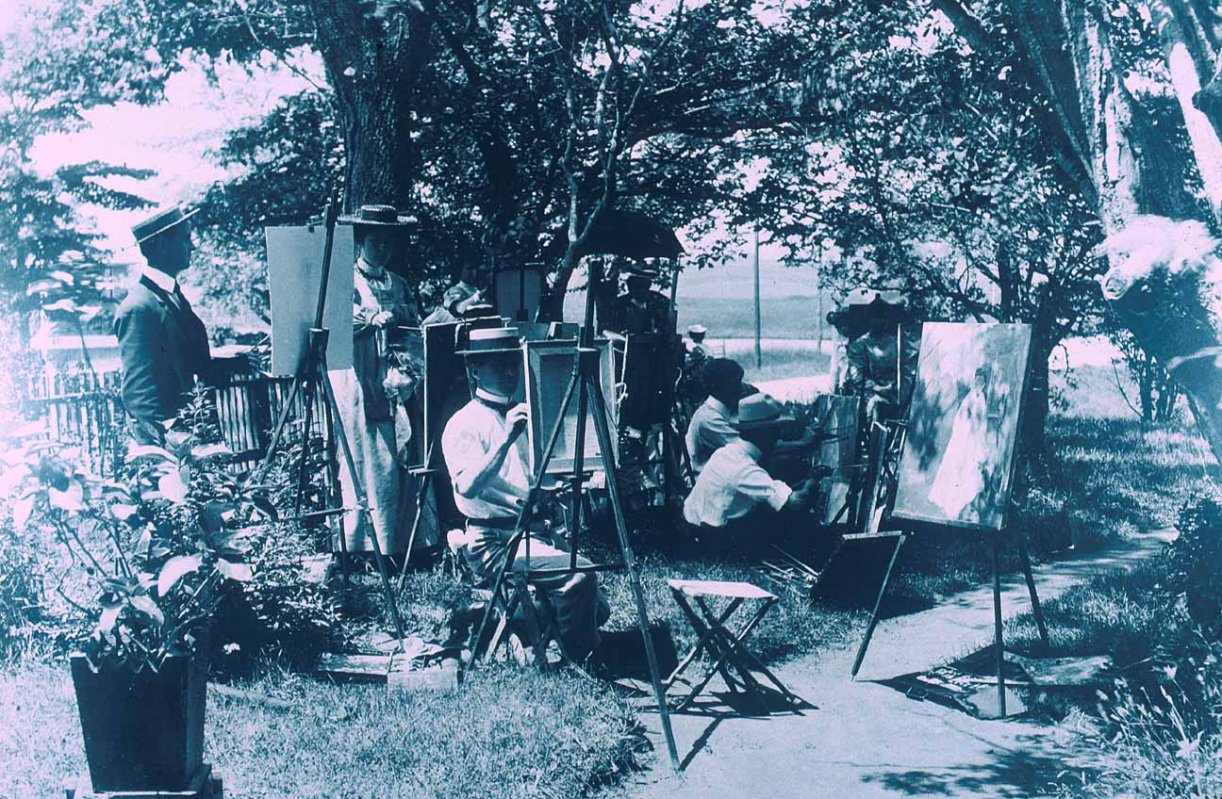 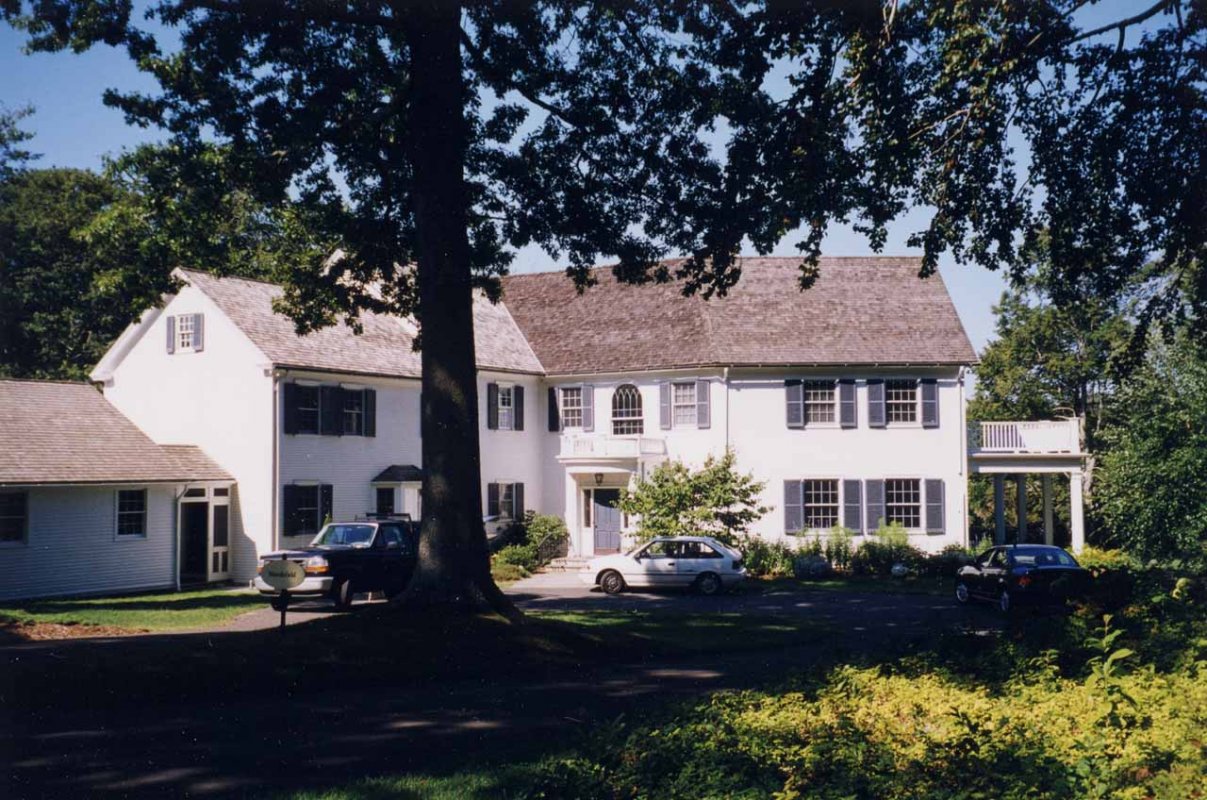 The story begins at the turn of the last century when a handsome Greek revival house in the village of Old Lyme was left to a spinster, Miss Florence Griswold, by her seafaring father.

To make ends meet, Miss Florence ran the place as a seasonal boarding house. To her delight, the clientele she attracted was a rollicking band of New York artists looking to escape summers in the city.

They came in search of landscape subjects to paint in the new Impressionist style. These they found in Miss Florence’s gardens, stands of mountain laurel, fields and barns, and in the marshes that lay just across the Lieutenant River. The ranks of Miss Florence’s artists grew over the years and became known as the Lyme Art Colony. It included such masters as Henry Ward Ranger, Childe Hassam, Willard Metcalf, Matilda Browne, William Chadwick, and many others. Today, Miss Florence’s house and our new museum stand as the core elements of a regional institution dedicated to this great moment in American art.

At the turn of the century Miss Florence’s property was like a small farm. Outbuildings served as artists’ studios. Our charge was to design a 10,000-square-foot gallery building that would house magnificent paintings like Kalmia, by Willard Metcalf, in the process evoking the site’s pastoral character and the fun-loving spirit of the Lyme Art Colony.

The first question we faced was where to put the new building. This aerial view shows the property configured as it was when we began. Miss Florence’s house faces the street. A much later residence in the back called the Marshfield House stands on property that had been sold off and later reacquired by the Museum.

The Marshfield House, facing the Lieutenant River, had a separate entrance road ending in a circular drive. How to deal with this serviceable 1930’s suburban residence was a puzzle. There was disagreement over whether to tear down the refurbished Marshfield house, leave it as a free-standing building, or add to it. We saw value in it for support functions and recommended placing the museum in front and pushing the house to the background.

We introduced a new driveway network, demolished several Marshfield outbuildings, and situated our gallery to hide the Marshfield House from the central area of the property. We kept our addition different from the Marshfield House but found similarities in color and scale in order to have a harmonious overall composition. Removing shutters from the house made a big difference.

The nicest part of the house –the porch overlooking the Lieutenant River –we decided to leave alone. We attached our new building to the house in a way that between them formed a protected outdoor terrace facing the river.

How to honor the site’s history was a challenge. Art museums these days avoid even a whiff of traditional style. We decided to run counter to that with an approach we hoped might be innovative while still mining the familiar, like the Colony’s artists did with their en plein aire work. So we explored elements of the Connecticut landscape. We gave the building’s three gallery rooms simple gable shapes that we thought suggested barns laid out all in a row. 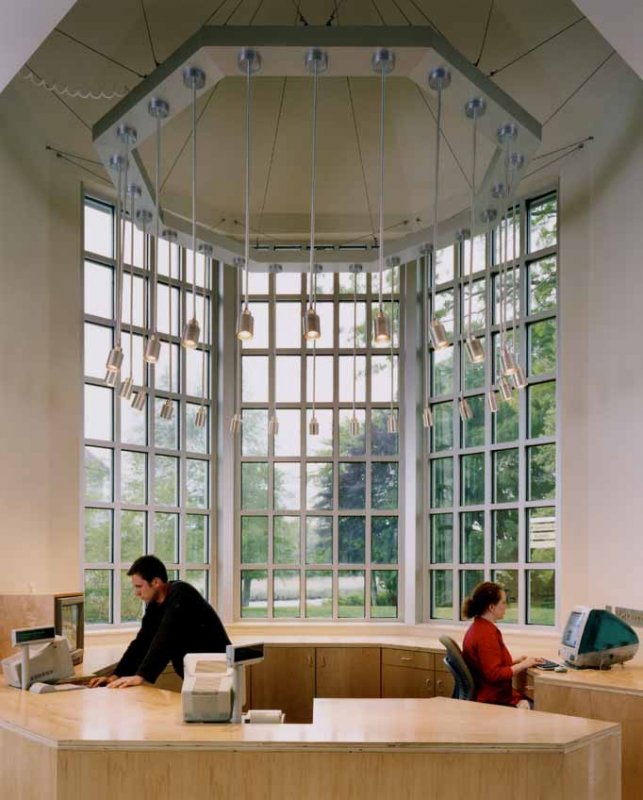 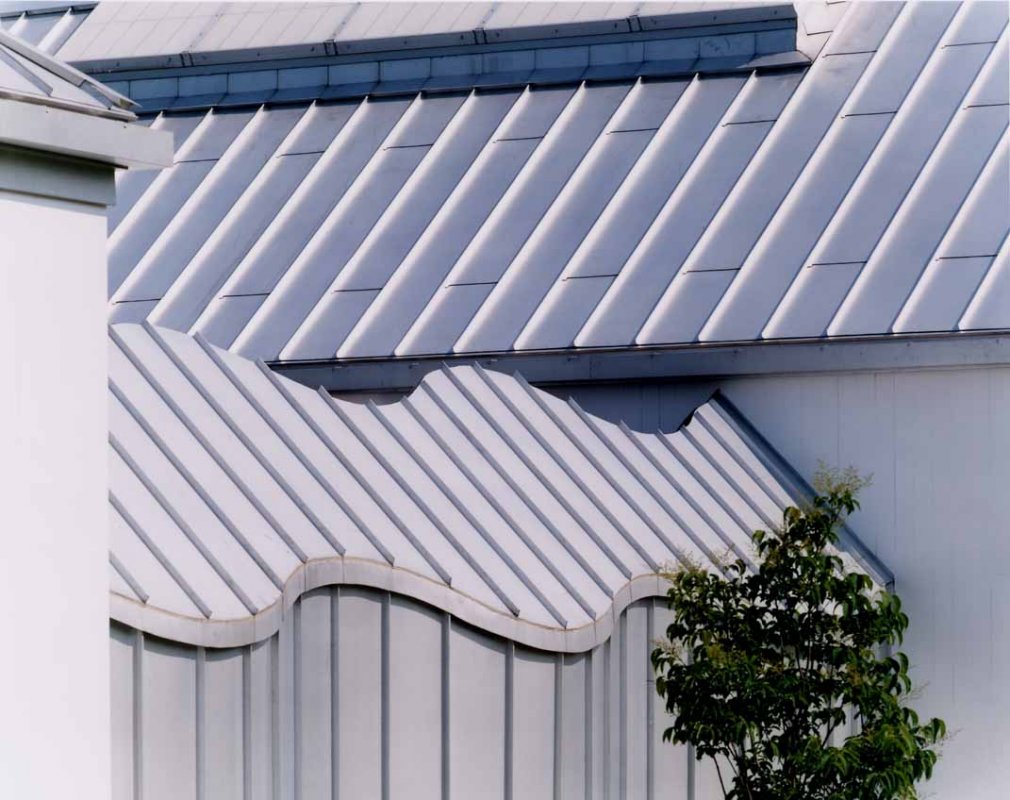 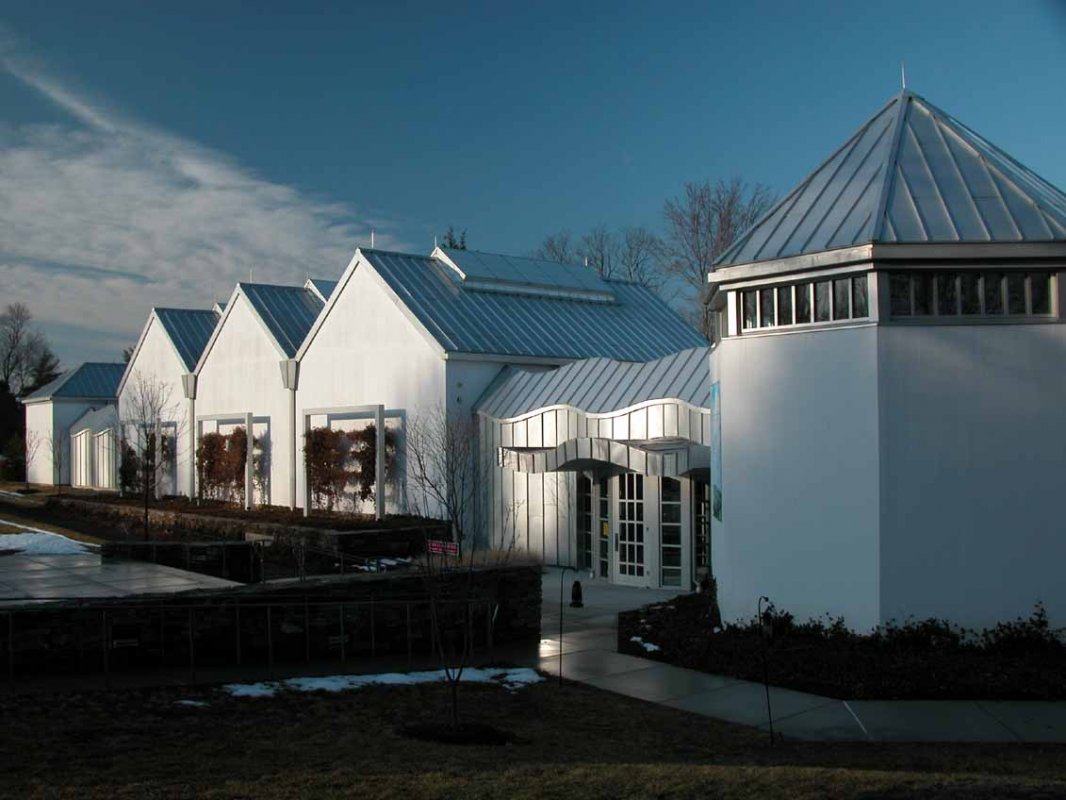 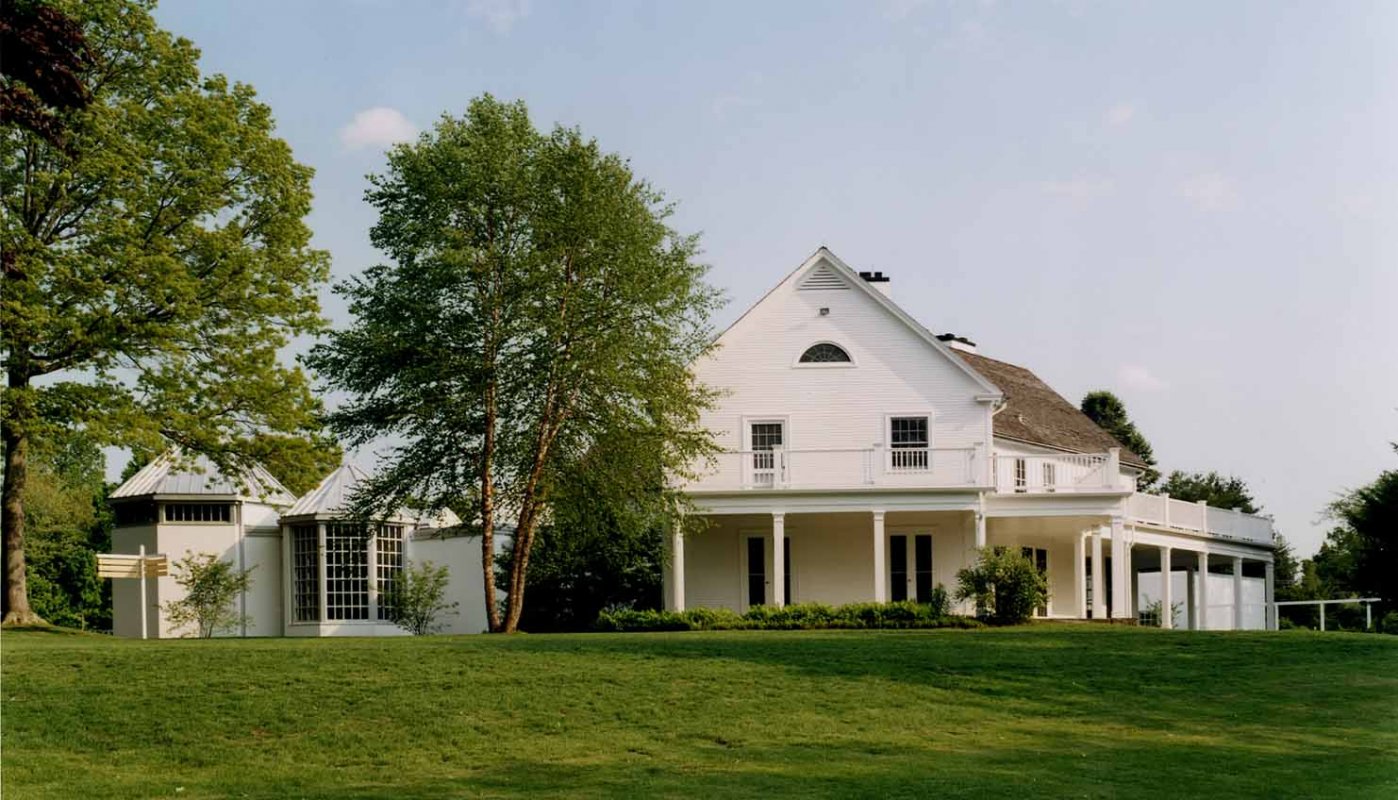 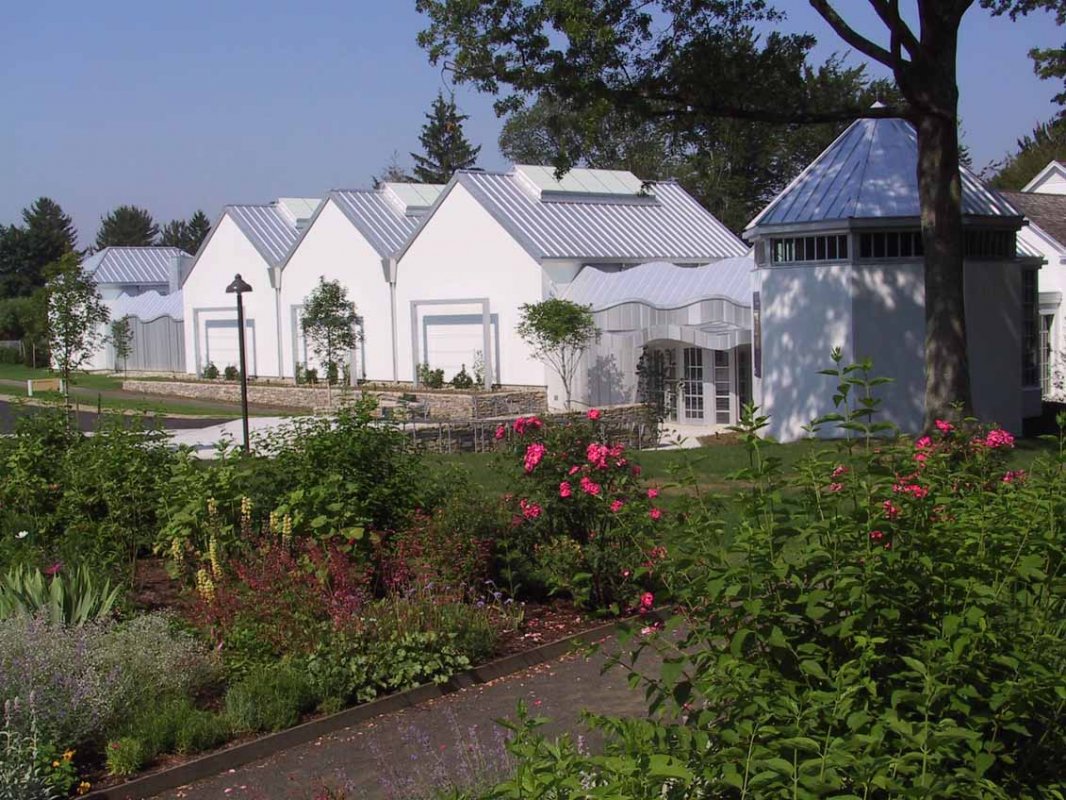 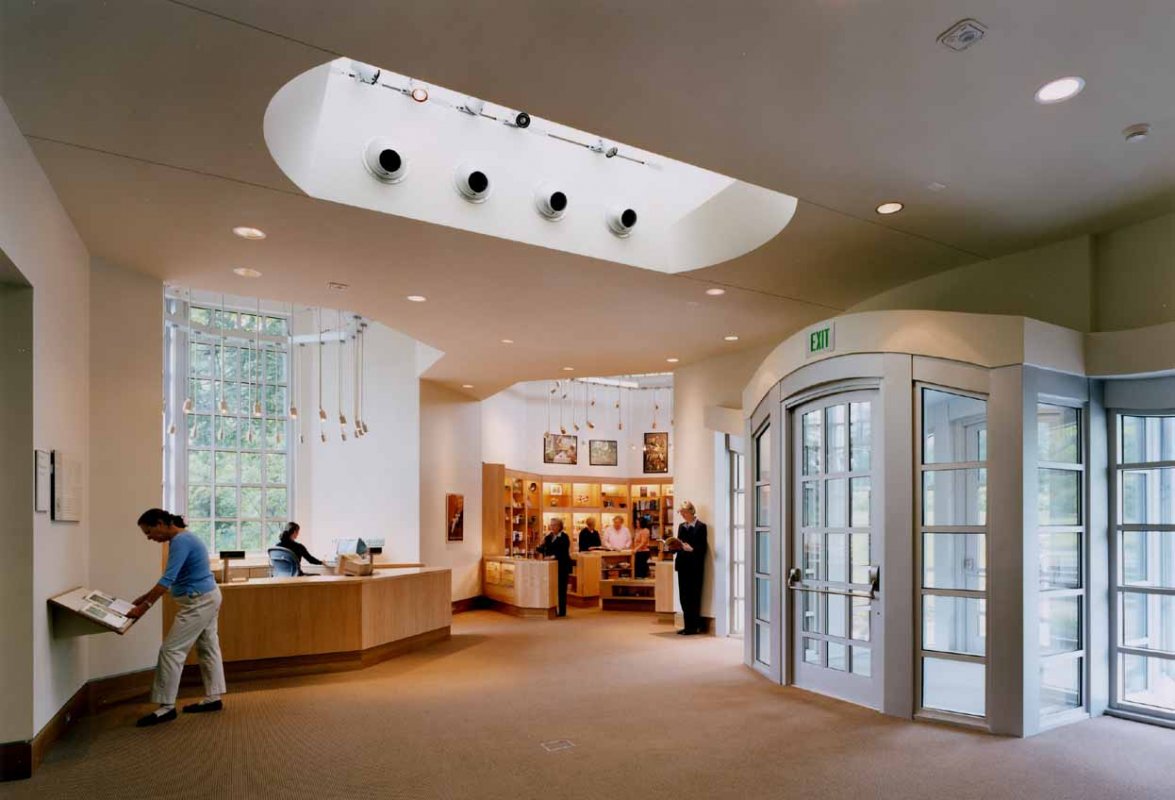 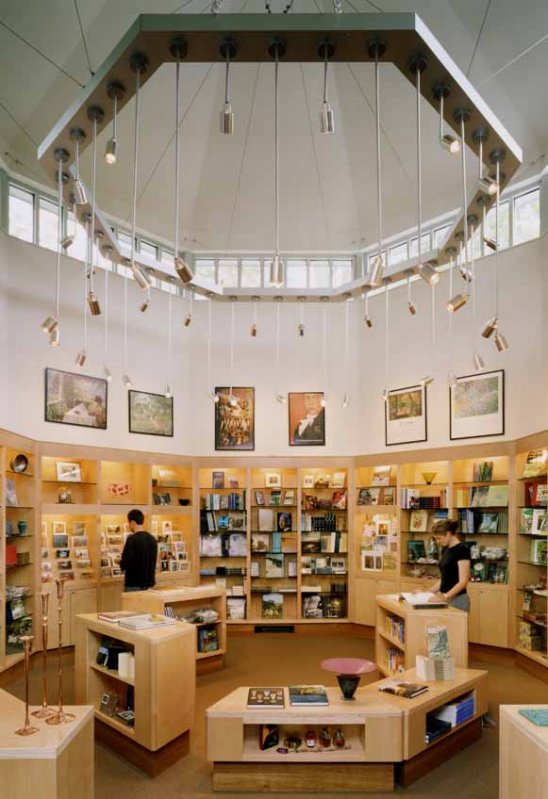 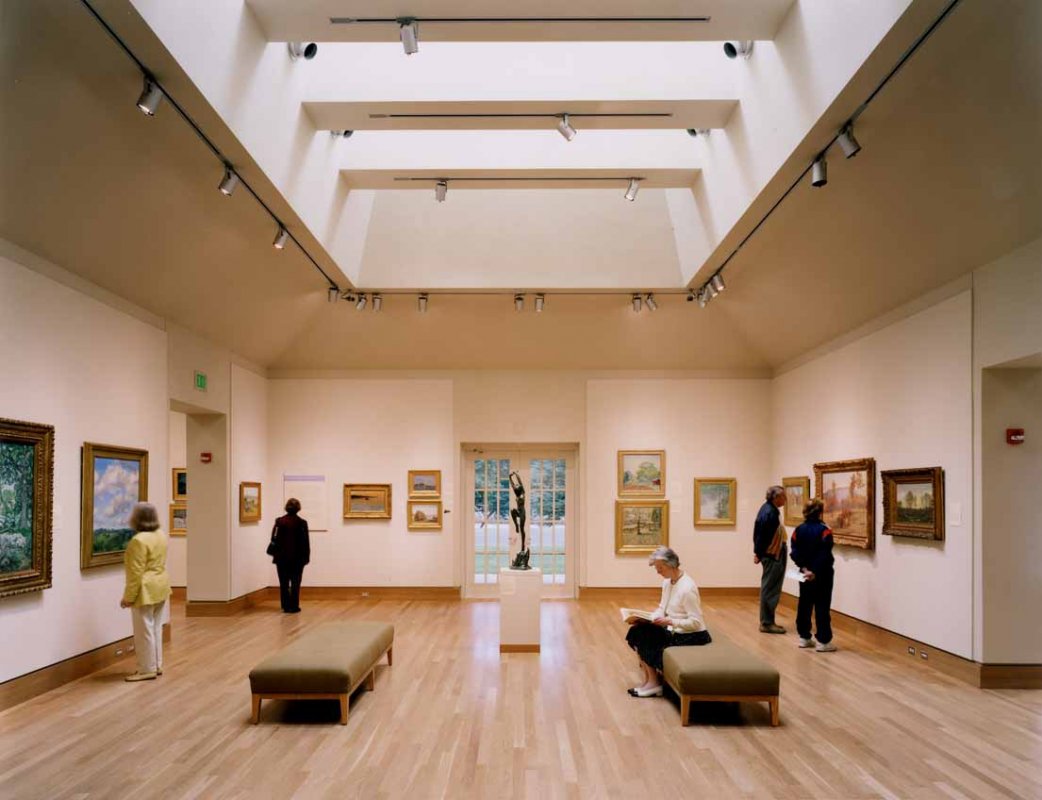 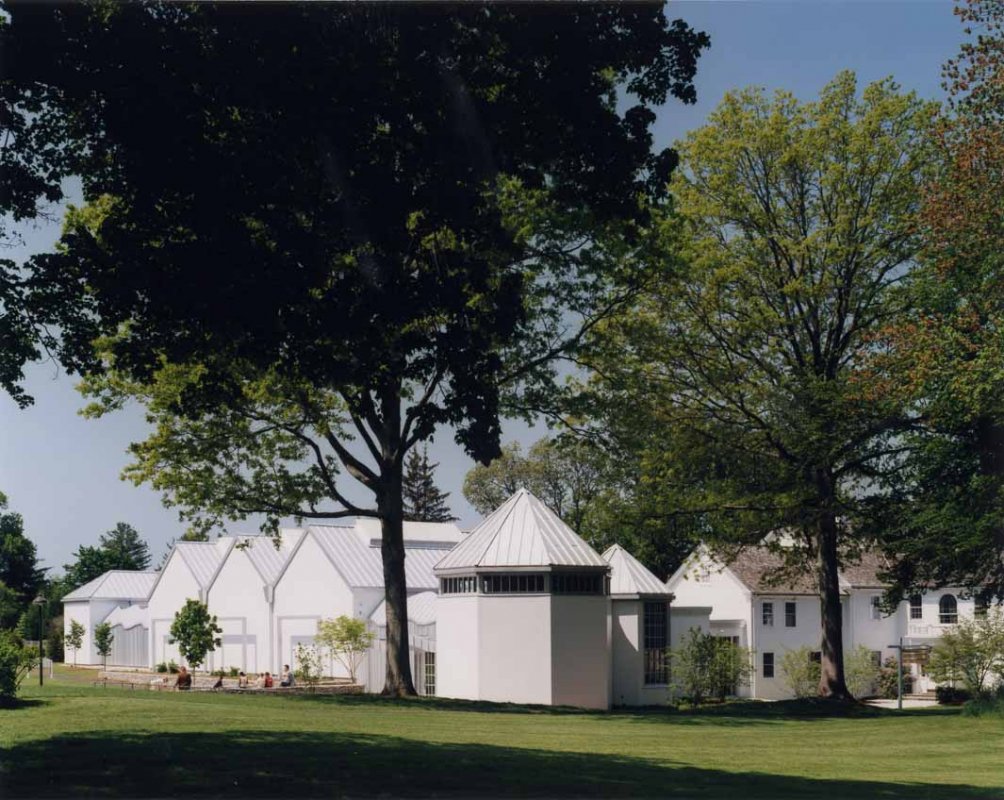 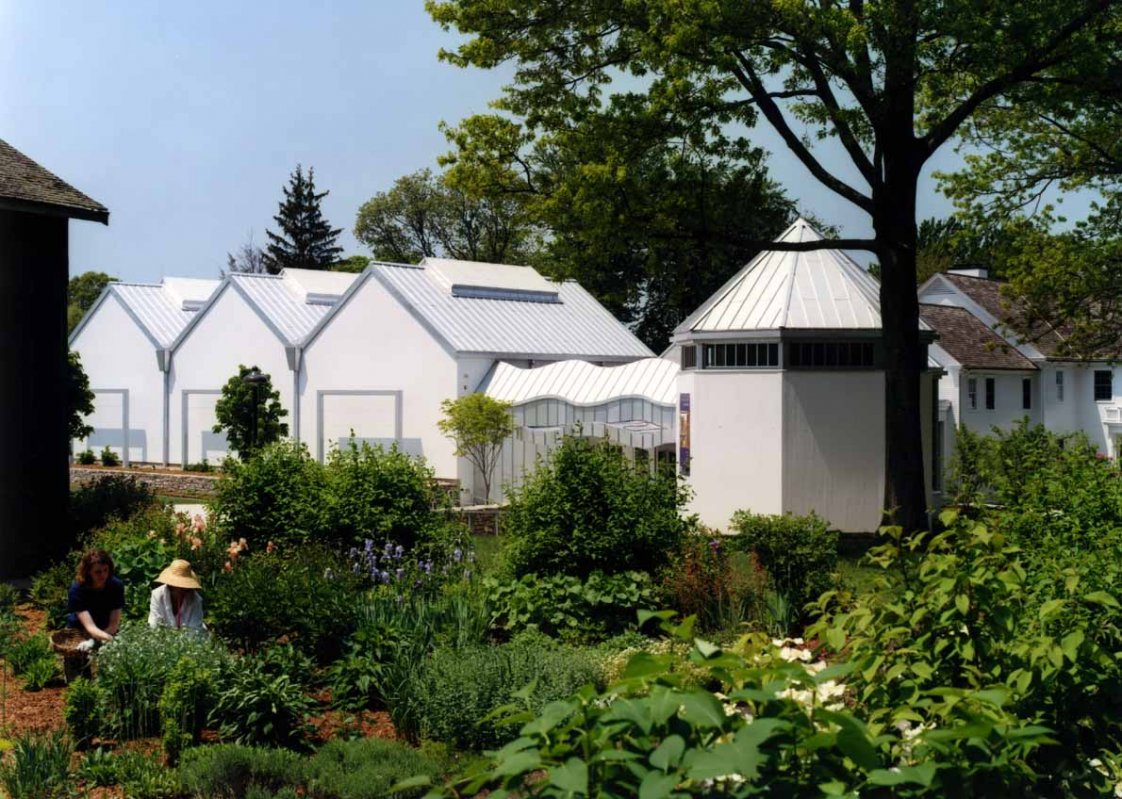 We brought sunlight in at our at our gallery ridges but filtered it with large fins to reduce glare. To underscore the luminescence of Old Lyme’s seashore light, we painted the interior with soft beige colors that we brought up from yellow.

At the northeast corner of the building we added two little structures that called to our minds small pavilions, and in them we placed the reception desk and sales shop.

We invented octagonal-shaped chandeliers to illuminate the interiors of our pavilions. We added a large window to our reception pavilion to showcase the Lieutenant River view so favored by Colony painters. We gave our pavilions octagonal roofs, thinking they might suggest “garden follies” in the landscape. We linked our elements together with a curving connective tissue that we hoped might evoke the searching line of the artists’ hand and the flowing waters of the nearby Lieutenant River (a subject of many Colony paintings).

We hoped our curvy structure would call to mind the Art Nouveau architecture that was all the rage at the time of the Lyme Art Colony. Knowing that many Lyme artists’ made pilgrimages to Europe, we thought of the distinctive Metro stations of Hector Guimard (left), exemplified by his famous Port Dauphine station (1900), as we designed the entrance to our gallery building (right). Our paean to turn-of-the-century Paris is far from literal but we hope at least suggestive of Guimard’s Metro stops.

Museum Director Jeff Andersen had the brainstorm of using archeological excavations to uncover the layouts of Miss Florence’s gardens, Childe Hassam’s painting studio, various outbuildings, and an orchard. These Jeff has been carefully restoring in a special historic zone at the site’s north end. To enable the restoration, we removed a suburban driveway, an automobile turn-around, a garage, and a shed.

The entire revived site brings the feeling of the Colony alive. But it was tricky to pull off in a way that would not disturb the quietude of Miss Florence’s little farm, given that our functional interventions would be much in evidence. In addition to the Krieble Gallery, we introduced a new entry road, parking for the handicapped, a visitor drop-off area, a new pathway system, loading truck circulation, and a doubling of visitor parking. These we tried to weave quietly into the lay of the land.

Today visitors can view the museum’s paintings right where many of them were created. Visitors can look out upon the same marsh grass that Childe Hassam sketched. They can see the same wooden easels and feel the same creaking floorboards that the artists did.

We hope we helped make it possible for visitors at the Florence Griswold Museum to commune with the turn-of-the-century Lyme Art Colony painters and their work in deeply engaging ways. 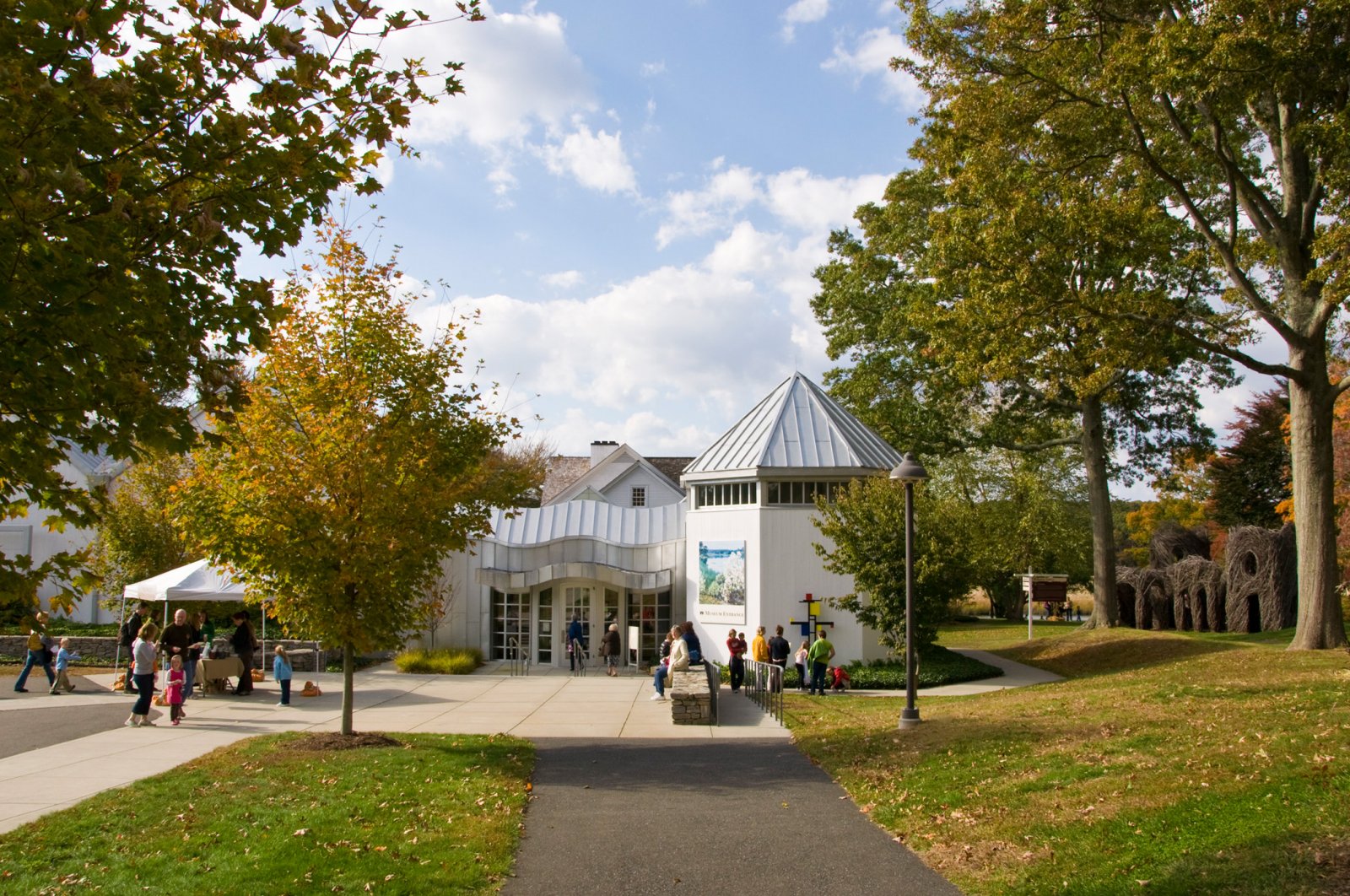 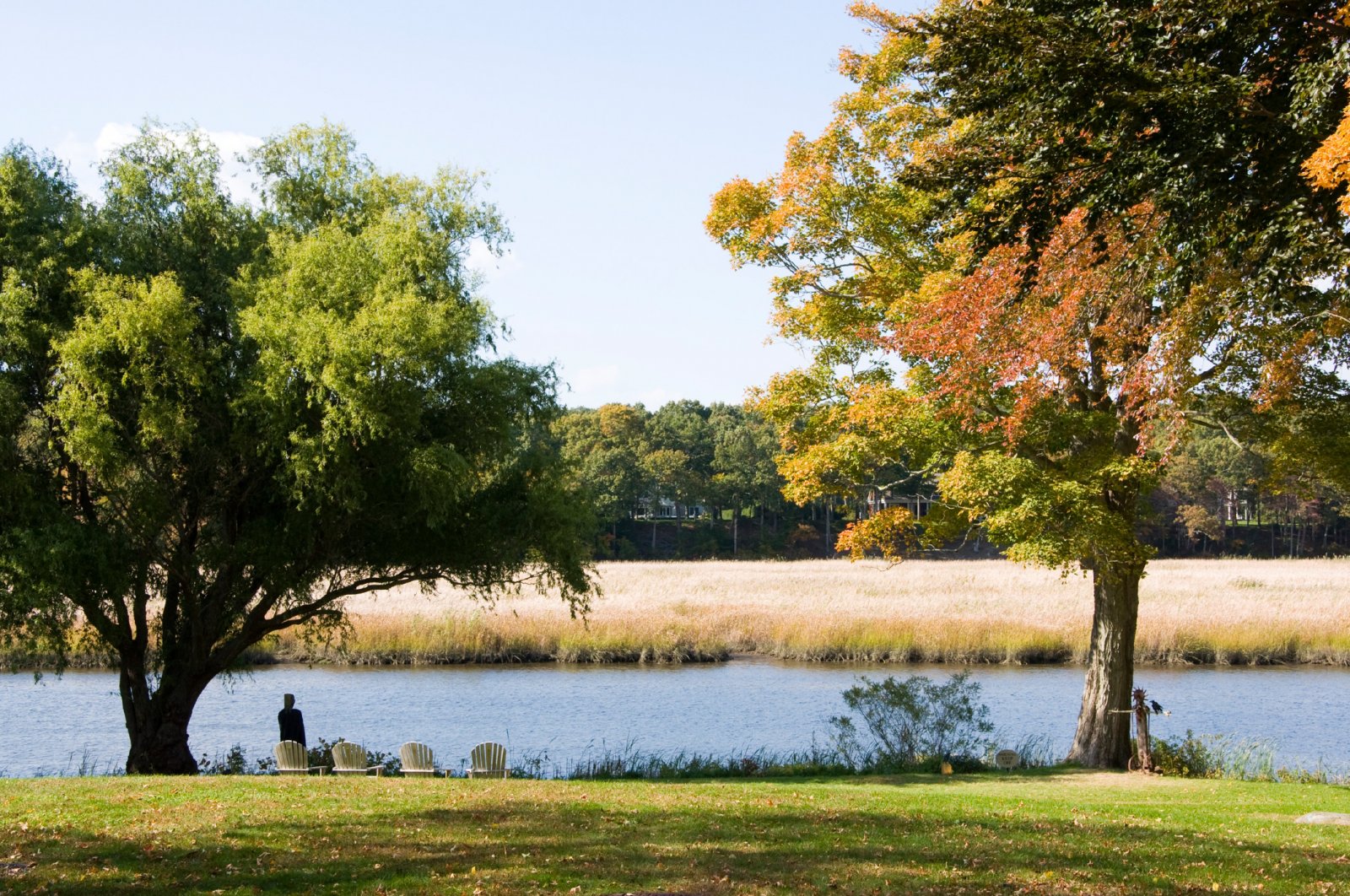