Building in a park can be controversial, especially when the building is big and the park is hugely beloved. We ran into this in Austin, Texas, at Town Lake Park, which is revered by Austinites as the “Jewel in the Crown” of their open spaces. Our friends at BGK Architects in Austin got us involved with them designing a really big building for that park --the 130,000 SF Palmer Events Center. The building was to host concerts, boat shows, conventions, festivals, weddings, flea markets and all kinds of funky community events. We tapped a group of 100 citizens to help us figure out how we might make so large a building fit seamlessly into so special a park and amiably reflect Austin’s memorable character. 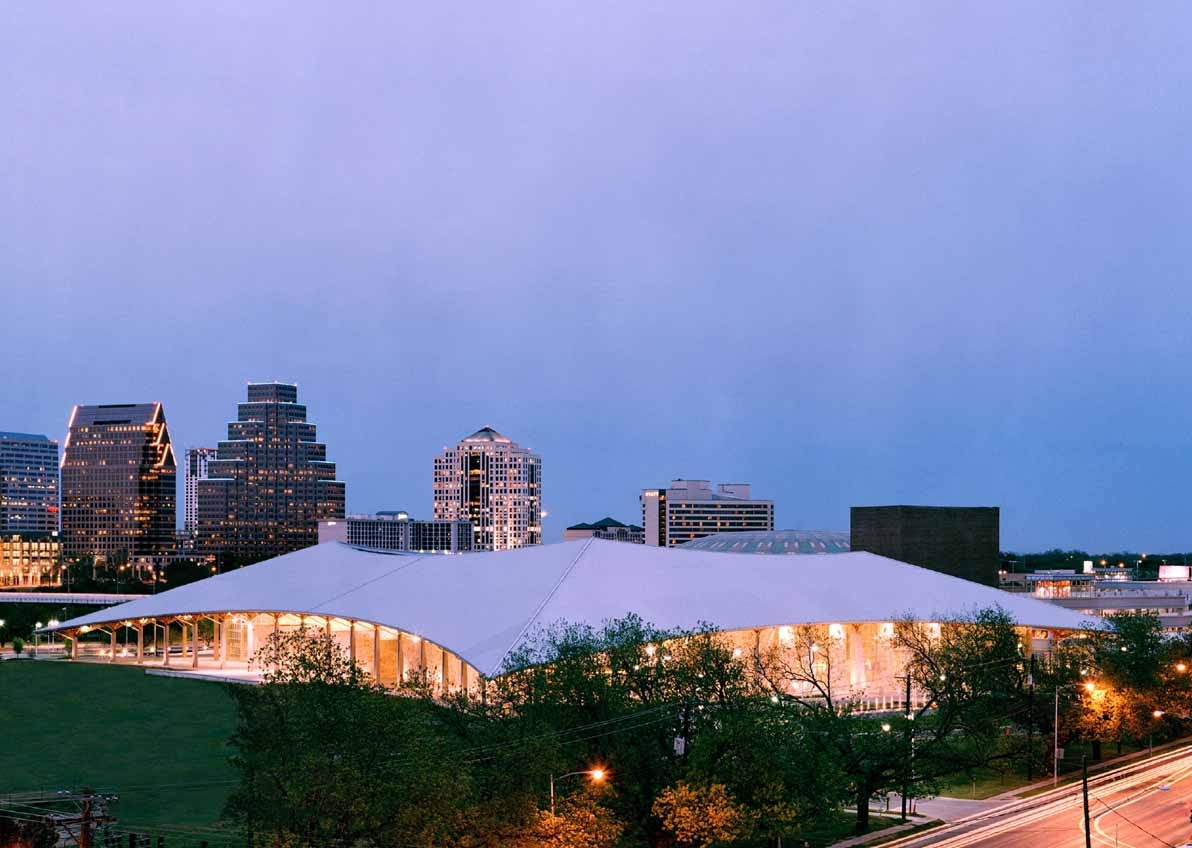 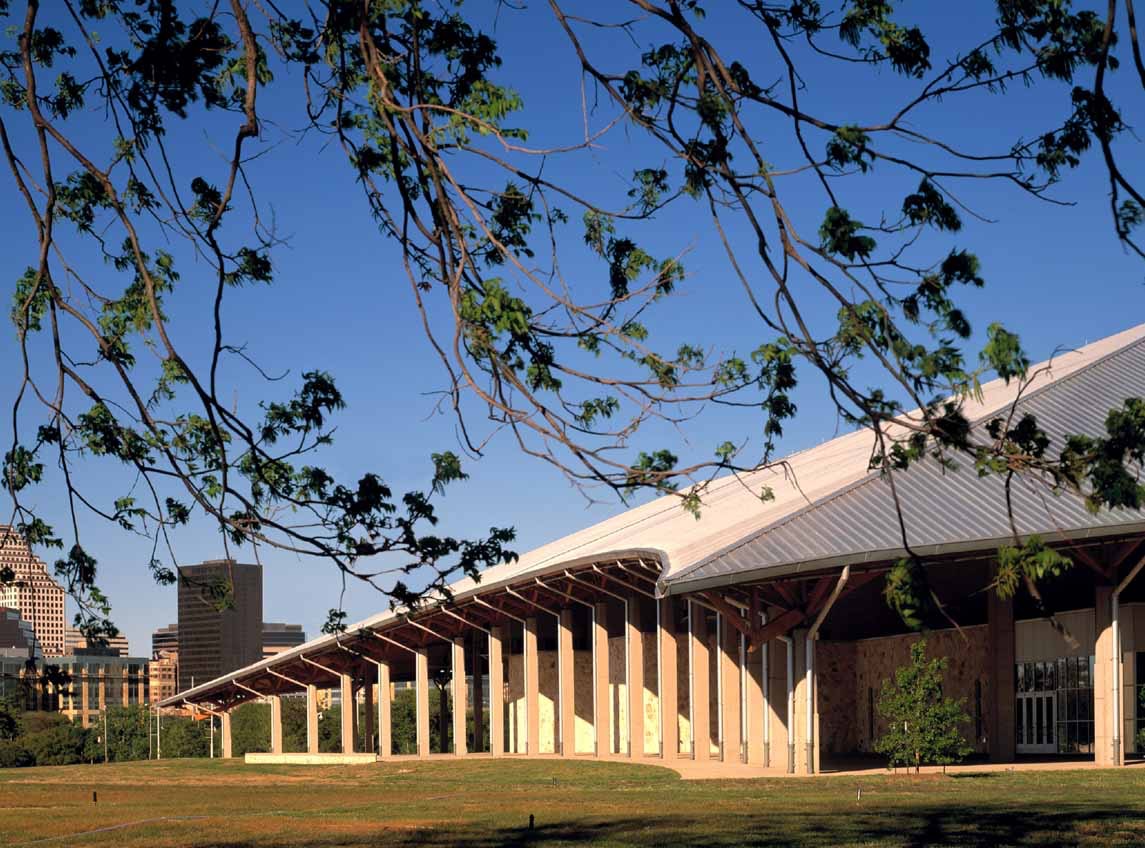 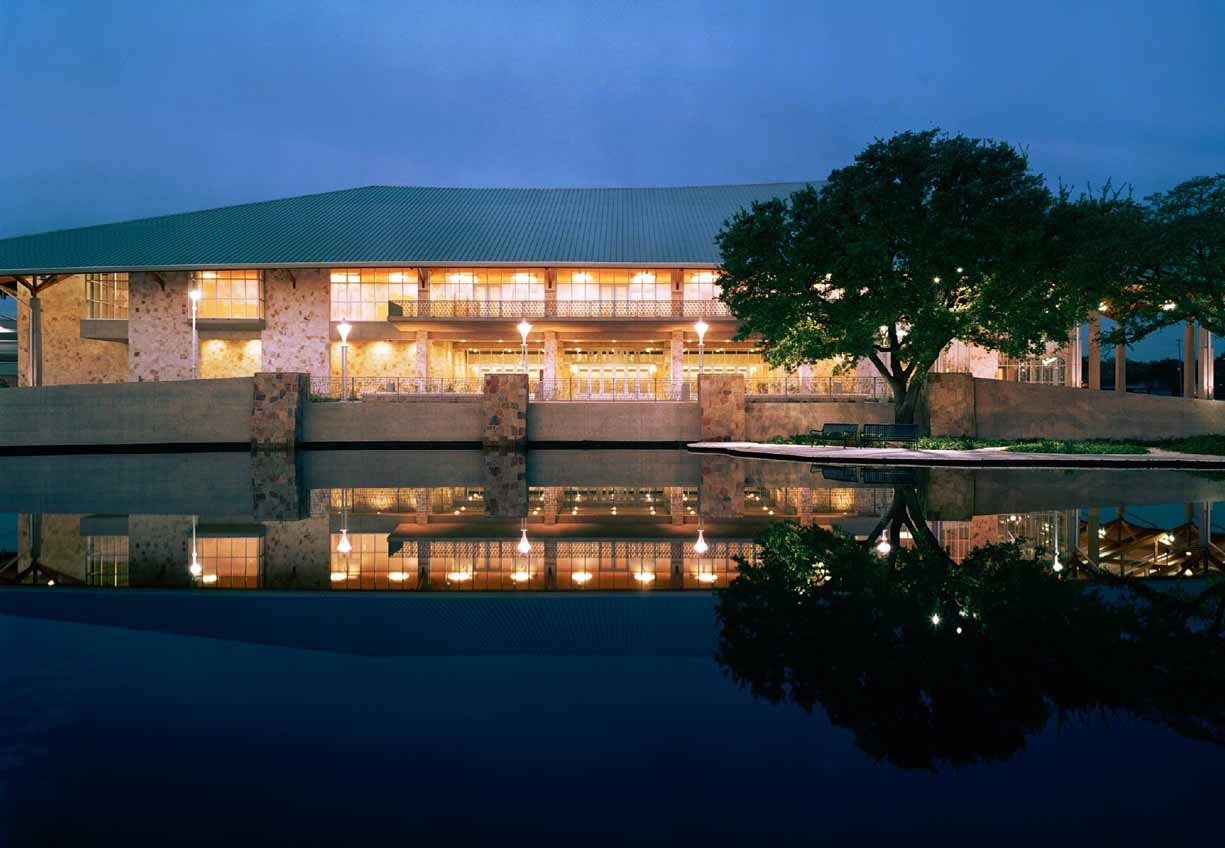 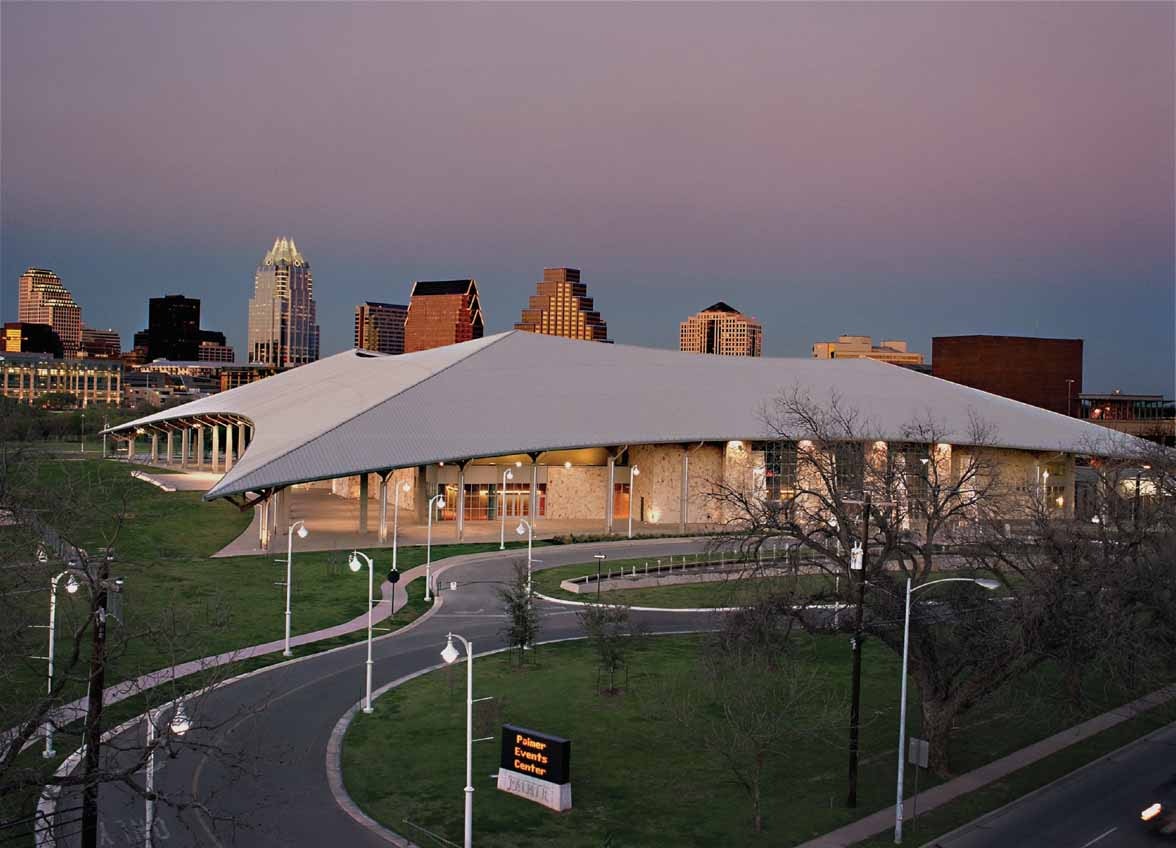 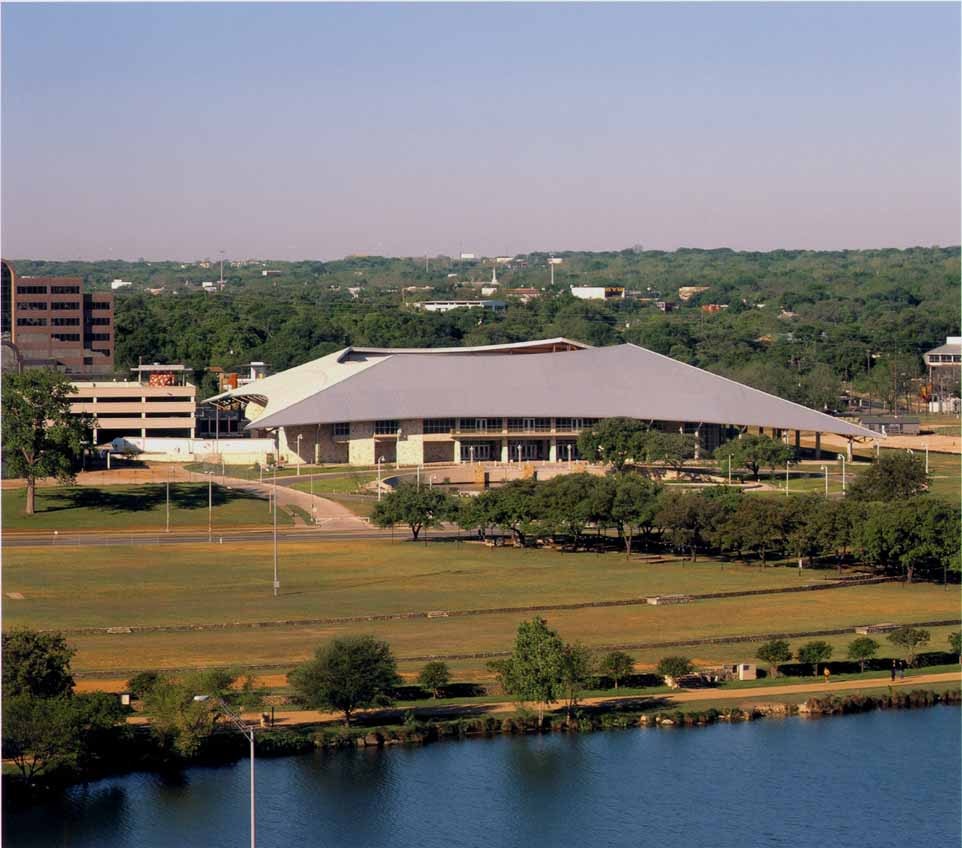 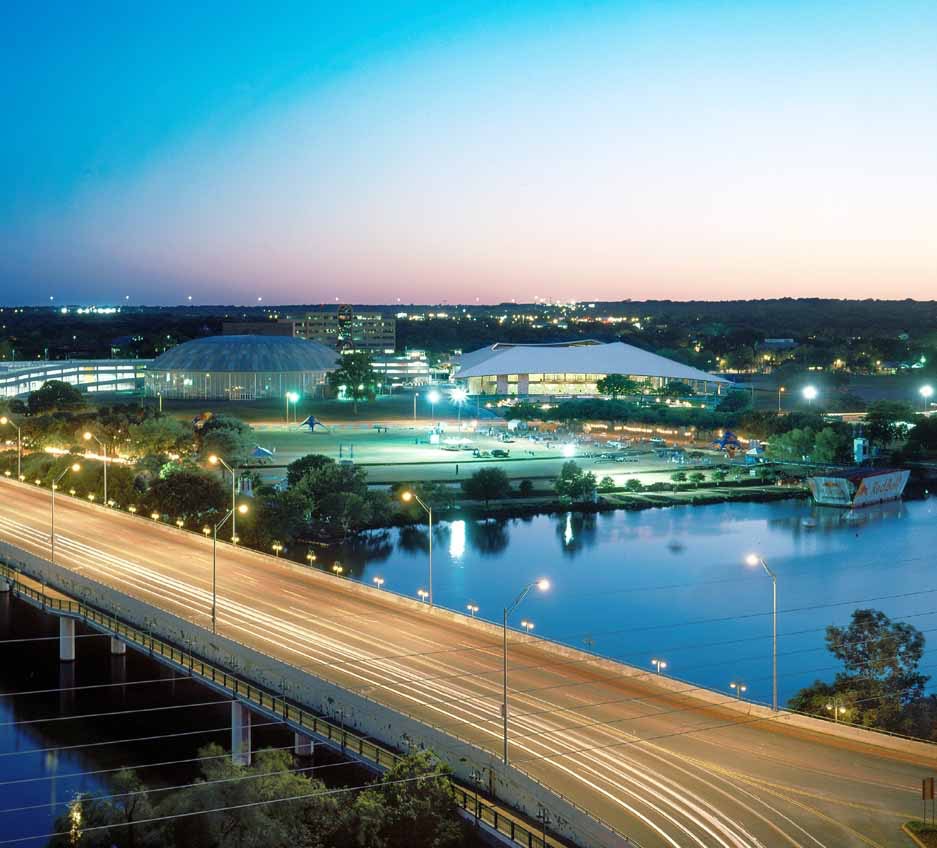 Neighborhood groups were apprehensive about the three-acre footprint prescribed by the city for the project and they didn’t want views of the park from adjacent neighborhoods blocked by it. This concern prompted us to site the building and its 1,200-car parking garage into a curvy corner of the park’s 64 acres, leaving most of the open space open.

Residents asked us what kinds of structures make sense for parks. We made a list, and rustic pavilions and party tents rose to the top. We were particularly drawn to the rustic character and shady interiors of the great post and beam pavilions of America’s national parks. We thought that maybe we could tuck our big box convention center under the open roof of a really huge one.

Informed by engagement with Austin’s leaders and citizenry, we designed a large, encompassing pavilion with big stone and concrete columns holding up deep wood trusses supporting wood purlins. We made up the underside of our roof from very heavy, knotty southern yellow pine boards.

The building’s walls are of Texas Limestone laid up in a rough rubble, recalling something you might see in Yellowstone National Park that hailed from the Worker’s Progress Administration days.

As powerful as the pavilion paradigm was for us, there were other references we liked, too. In circus and party tents we found lovely festive qualities. A tent shouts, “It’s a party!” We saw in the voluptuous curves of a tent the shape of something that would be soft and unthreatening for the park.

We used our rustic-pavilion structural elements to support the undersides of a giant roof that was shaped like a tent. We pulled our sloping tent roof down as low as possible at the four corners to give the impression of being pinned to stakes. We finished our roof with standing-seam metal, but wanted it to look a little like fabric stretched tight so that it would conjure a giant party tent.

We achieved a fabric look by cutting the roof in a shallow curve upward from the lower eave and in a similarly shallow curve downward from the ridge. The two curves work in unison, suggesting fabric pulled tight. Viewing the building from afar, the perception is of a tensile structure. 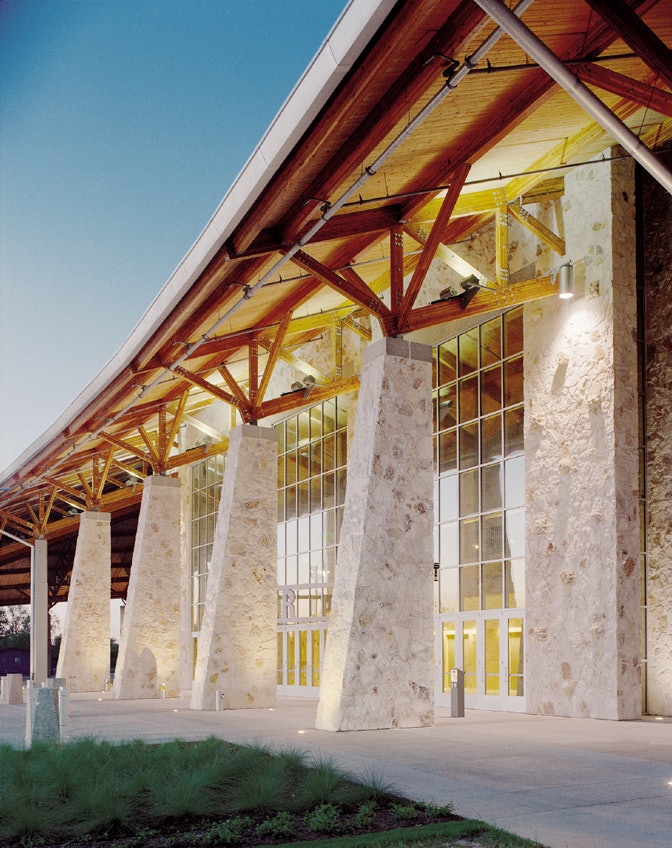 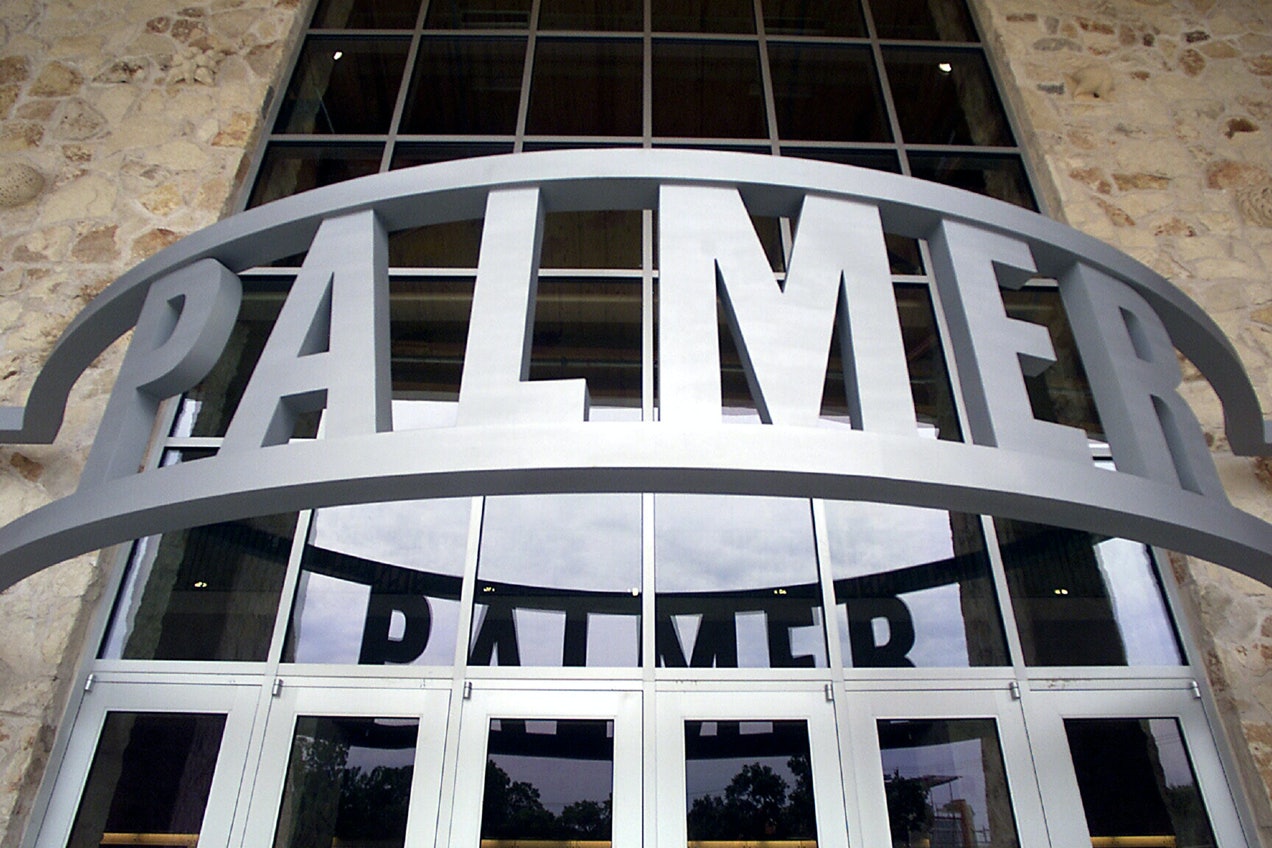 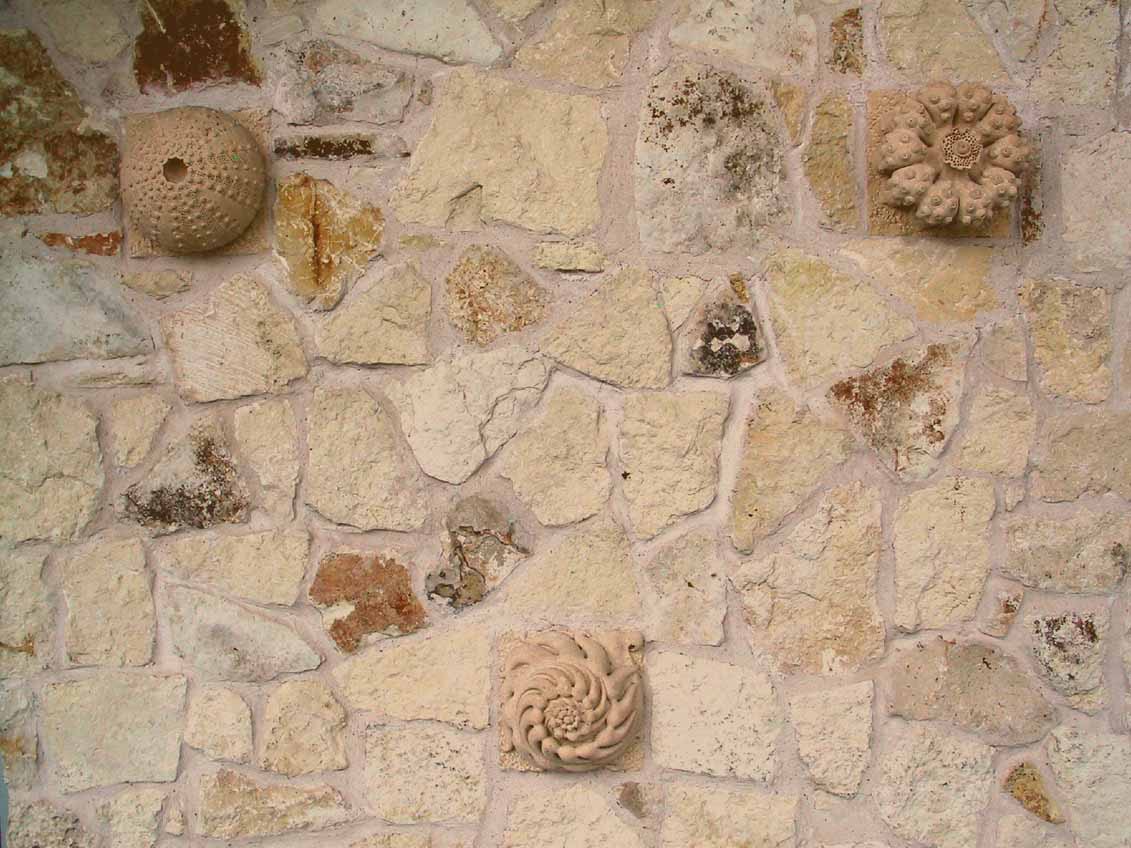 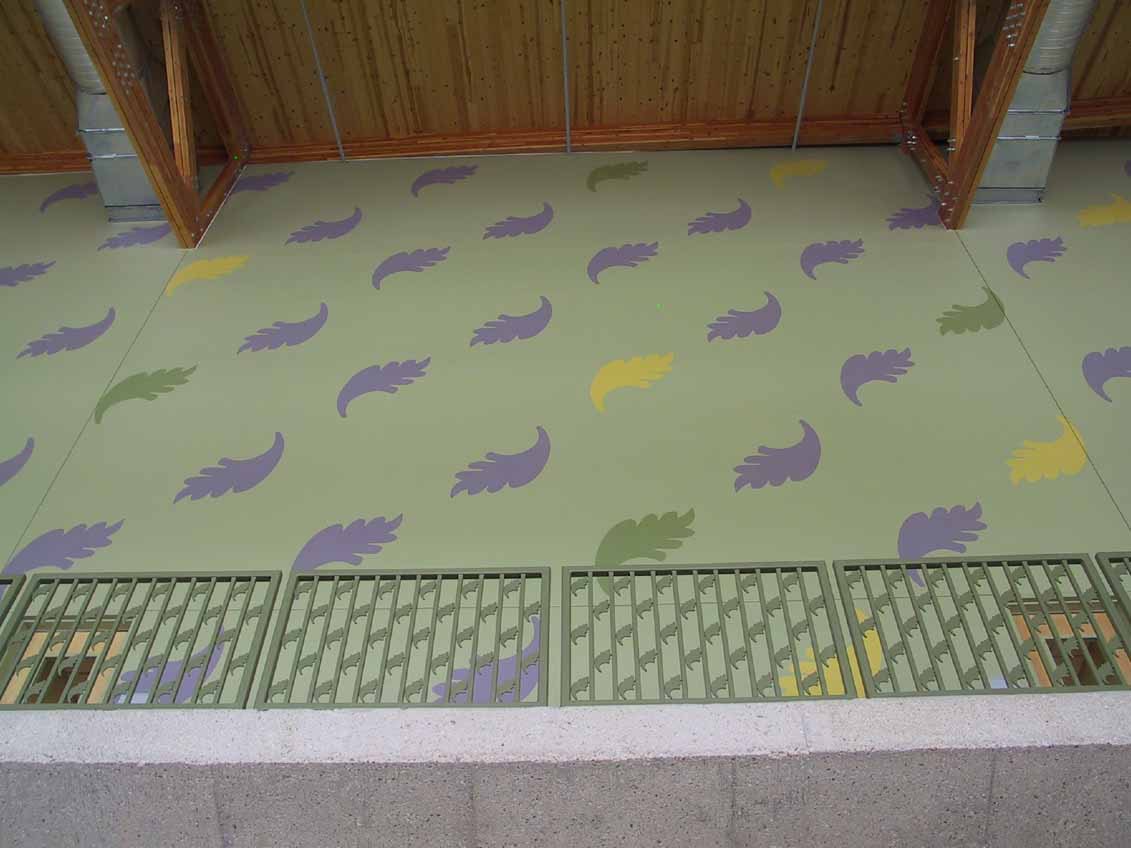 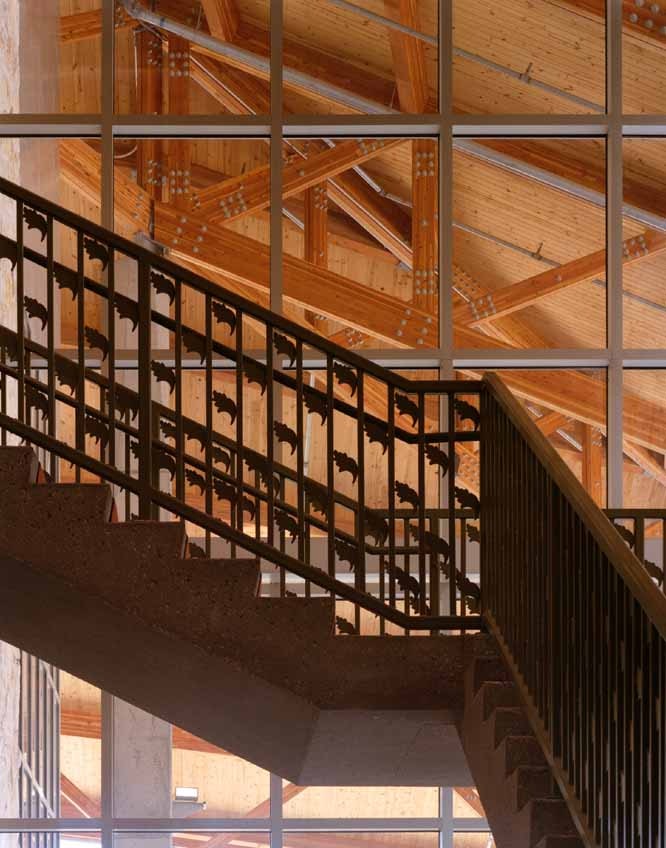 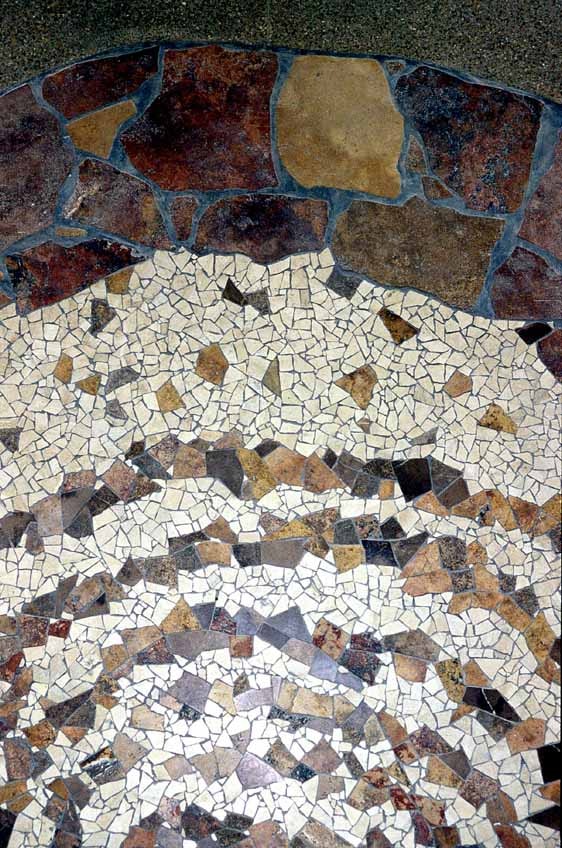 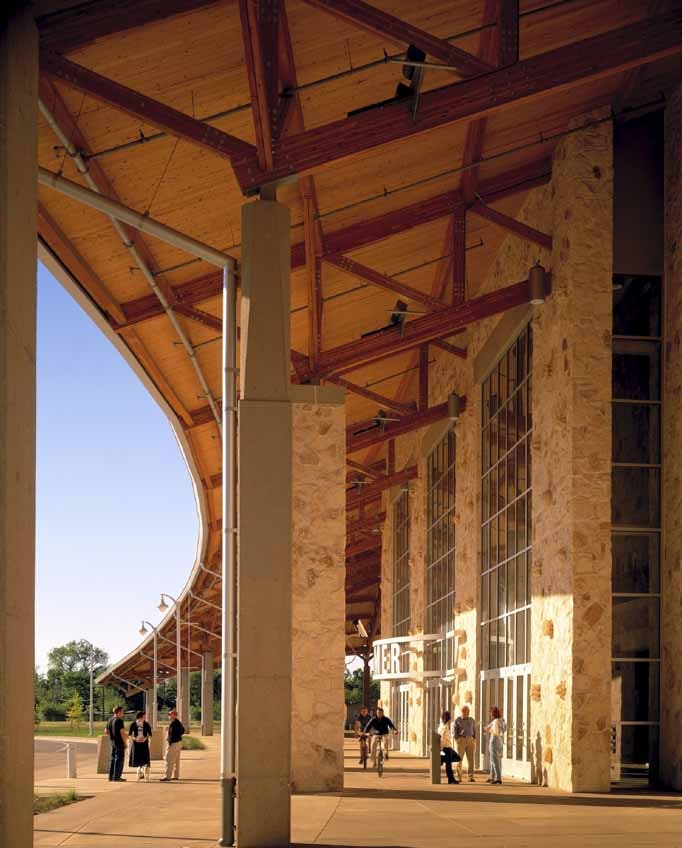 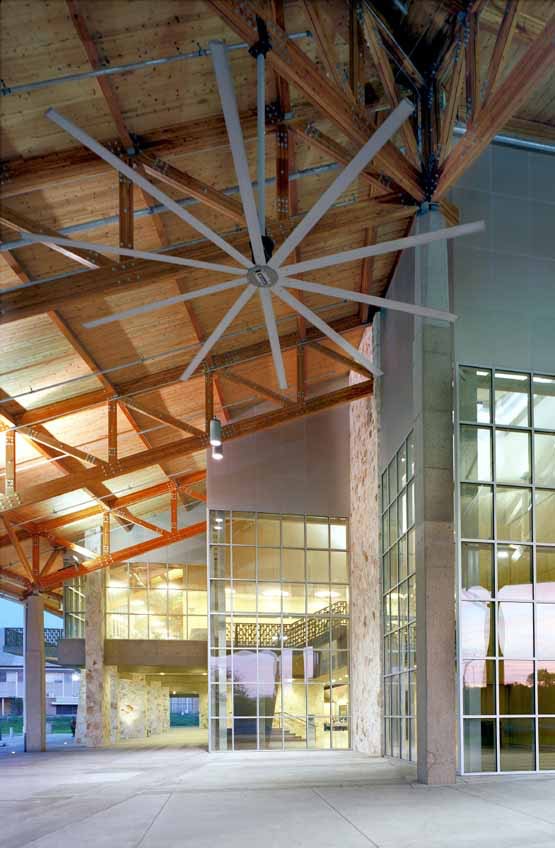 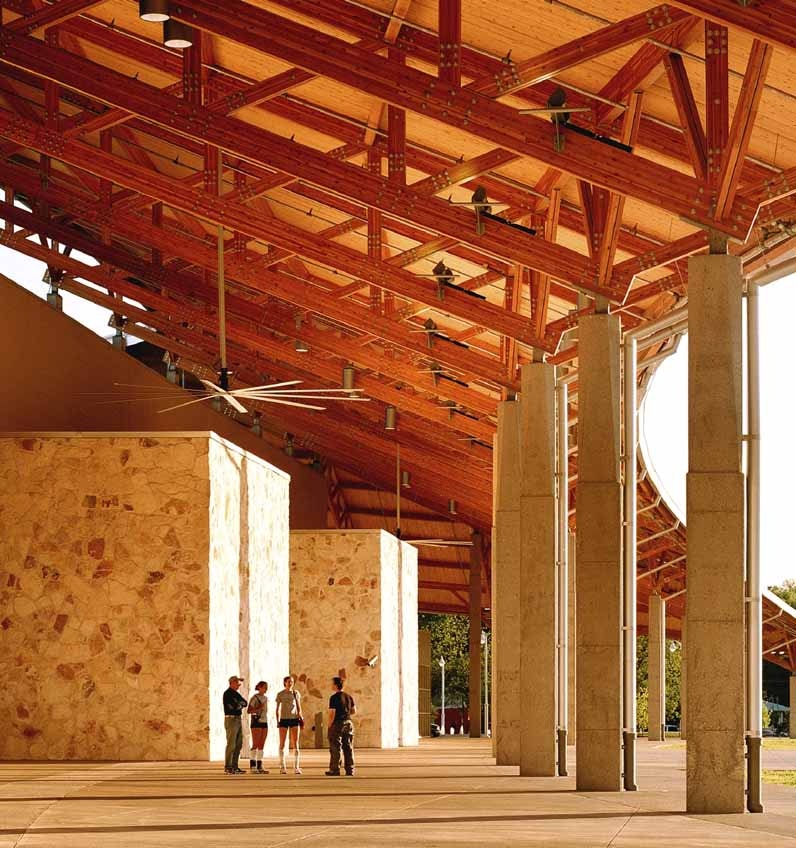 Our tent-roof hovers over a big box space prescribed by the city for event purposes. With overhangs extending up to ninety feet beyond the box, it provides summer shade, an essential amenity in Town Lake Park.

The great sloping roof deflects the eye up from the large mass lying beneath. At its four corners, the roof is pinned so low as to make the building appear mercifully smaller than it really is. At the same time, it forms a shape so simple and easily understood that it gives the structure an iconic presence.

The sizzle of Austin’s summers prompted a desire for water somewhere close to the building. A pond right below the north entrance has become our Texas Watering Hole. Patrons approaching the entrance are able to chart the arc of the building’s roof in its shimmering surface.

The building conveys rusticity with natural materials such as multi-hued native stones embedded in the lobby’s concrete floor by mosaic tile artist Twyla Arthur. People run their fingers over mysterious hand-carved medallions that are tucked in with the pieces of Texas limestone in the exterior walls. They were designed by Holly Kincannon of Kincannon Studios.

Ceiling fans 20 feet in diameter stir a breeze on Texas-hot days. They’re for cooling hogs, but they work on people, too. The Hill Country is referenced in a leaf mural visible through the building’s large lobby windows. Leaf shapes from the mural are integrated into railings on the building’s interior and exterior. Our graphics are all about Texas. If you look twice at the large “Palmer” sign over our front entrance, you’ll see a cattle brand.

At more than two acres, the hall seats 10,000 for boxing matches and rock concerts. It is also home to car shows and community garage sales. Most memorably, it’s the place for Carnivale, Funky Austin’s annual blow-out: a massive party for which Palmer’s festive persona is well-suited.

From its key location overlooking Austin’s famous Town Lake, Palmer has become one of the city’s most beloved architectural icons.