The organizational format we followed these many decades has allowed the luxury of unique approaches to cohabit within a single office. That’s a little different from what’s found at most places, where specialized partner roles such as manager, marketer, or designer, are the order of the day, and office output reflects a more singular point of view. At Centerbrook, each principal finds and performs his own projects. We use communal office resources and are blessed with a spectacularly talented staff, but other than that, we’re pretty much on our own, and our work reflects it. 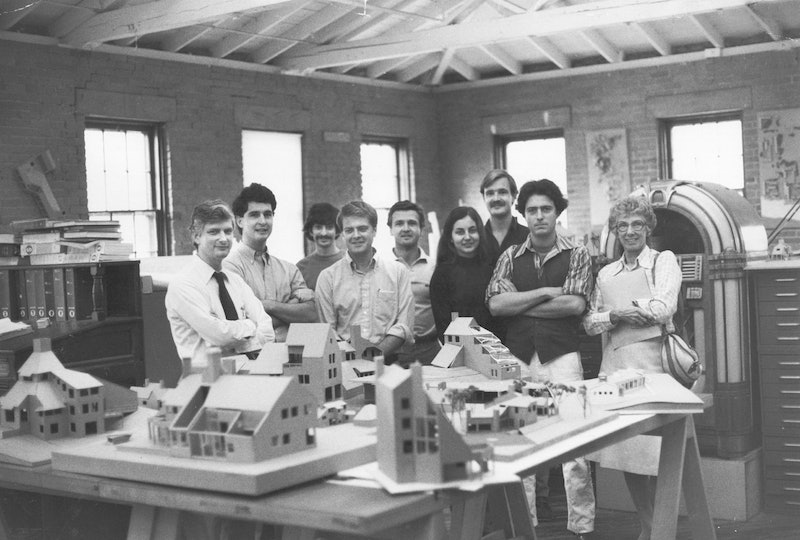 The Centerbrook staff in 1978 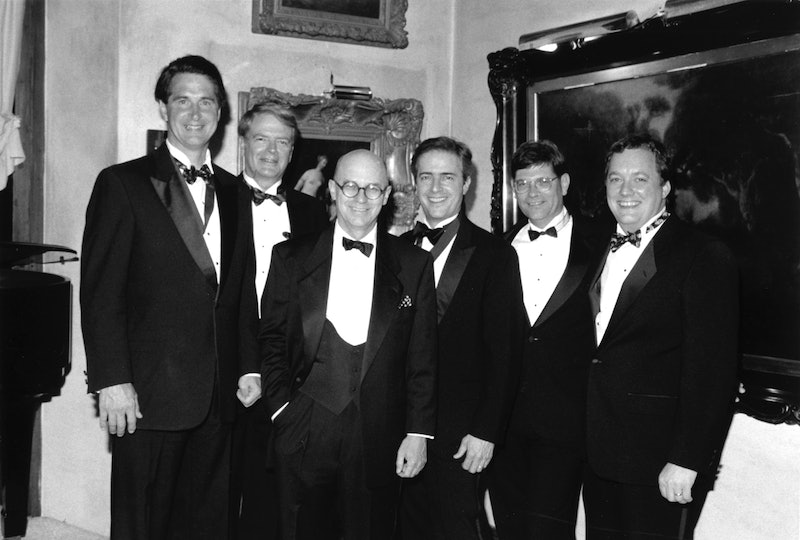 We do share a lot, however. We support each other, heart and soul; we influence each other; we watch over each other; and we’re generally of like minds. We respect rather than eschew tradition and are not afraid to make buildings that resemble something that came before. We are devoted to sustainability, including the enhancement of disappearing land and cityscapes that people hold dear. On campuses and in cities we try to stitch together torn and frayed seams, bringing focus, harmony, and completeness to places where architectural entropy had been setting in. We think buildings and the spaces between them should invite people to sit comfortably in shady spots, provide intriguing vistas, create special landmarks, convey special meaning, inspire small ceremonies, nurture big festivals, kindle memories, and delight the eye.

In our approaches there are differences to these ends and thus differences, too, in our buildings — some of them subtle, some less so. We have long sensed a gentle and positive competition between us, but that competitive spirit is tempered by the mutual friendship, admiration, encouragement, and wisdom that comes from many years working together.

Our format has remained unchanged from our earliest days in 1975, when the oldest three of the current partners — that’s Jeff Riley, Mark Simon, and Chad Floyd — along with emeritus partner Bill Grover and partners Bob Harper and Glenn Arbonies, both deceased—inherited our 19th-century factory in Centerbrook, Connecticut, from Charles Moore, our mentor. Charles had been Dean of the Yale School of Architecture, so as Yalies we three of the current four partners went pretty far back with him.

Bill, too, attended Yale Architecture. He operated ably as the closest thing we had to a managing partner, guiding us with Yankee acumen. Bob and Glenn had pedigrees from other fine schools and contributed strong fluency in construction technologies. A RISD graduate, Jim Childress was never a student of Charles’s, but he had numerous opportunities to work with him in the 1980s, so the four of us now remaining were influenced at a youthful age by the verve and free-thinking of Charles Moore’s remarkable design talent.

In 1975, Charles headed off to Southern California, lured by UCLA, which offered among other blandishments first class seating on airplanes. That left the original three of us to carry on, which we have been happily doing since, immensely grateful to Charles for making our firm’s launch easy. Charles died in 1993, but his memory remains strong with us. 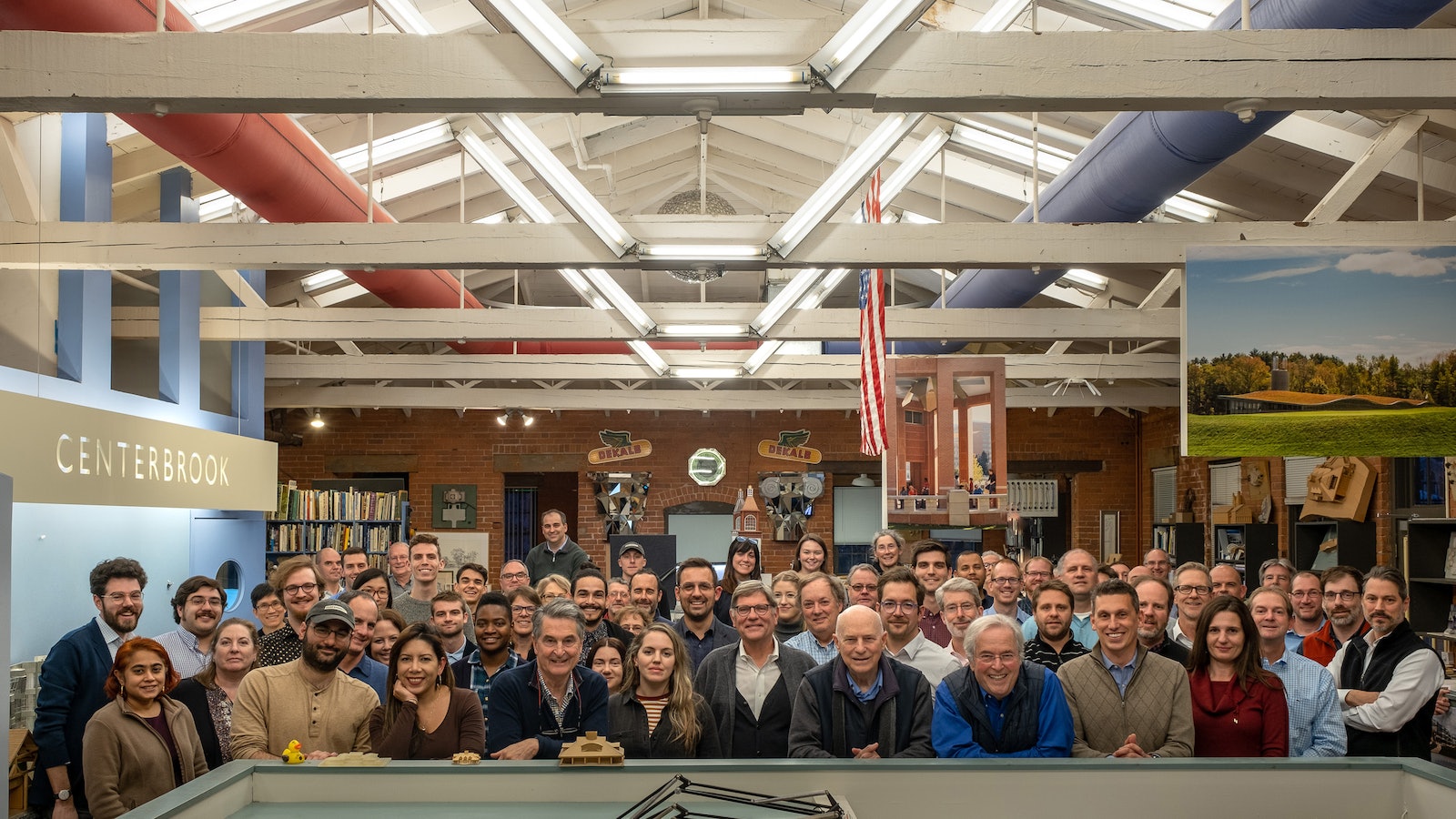 The Centerbrook staff in 2019

Eventually we came to call our office Centerbrook, thinking highway signs to the Village of Centerbrook where our building is located might give us some free publicity. Knowing more than that would be needed for success, we vowed then and there to evolve our operation into a top-notch professional outfit that would let us four shine independently while operating at the highest level of quality.

The uniqueness among architecture firms is our “independence” format. Our goal has been to allow each principal to operate across the full architectural spectrum exactly as we would be doing were we sole proprietors. Our format has yielded a firm whose work is prolific, whose clients enjoy the ministrations of principal-designers, and where the staff’s artistic, managerial, technical, and support expertise is boundless. You might ask how critical the specific mix of the principals is to our success? Each principal contributes a special something, so if you took one or two of us away from the place it would change, but only gradually, because Centerbrook’s staff and future leaders are strong. Many have been with us for nearly 30 years. They provide stability and a storehouse of experience that yields many dividends in mastering the diverse ways we design buildings.

In fact, design diversity is a Centerbrook trademark. That’s also a difference from most other firms, which inhabit narrow bandwidths of curvy planes, or glass and timber, or spikey towers—all striking to look at but limited in scope of materials and details. By contrast, our buildings are so aimed at each of their situations that they end up looking very different from one another. This means our staff must maintain a commanding knowledge of many materials and styles — a tall order. This search for the particular, though, is Centerbrook’s greatest strength. It makes our work emblematic, but emblematic of our clients, not of us. To get there, we exercise a kind of ego-loss in which we unclog our personal design receptors of our own baggage in order to make out signals coming to us from our clients.

This narrative was adapted from the Introduction to Centerbrook 4.