It has been 30 years since the Great Flood on June 5th and 6th of 1982, and I’m ambivalent about celebrating it. I have some wonderful memories of camaraderie and determination here at Centerbrook in the face of destruction, but the flood hurt many people in our town and nearby. In any case, I remain in awe of the titanic power of natural forces, in this case rain and water. 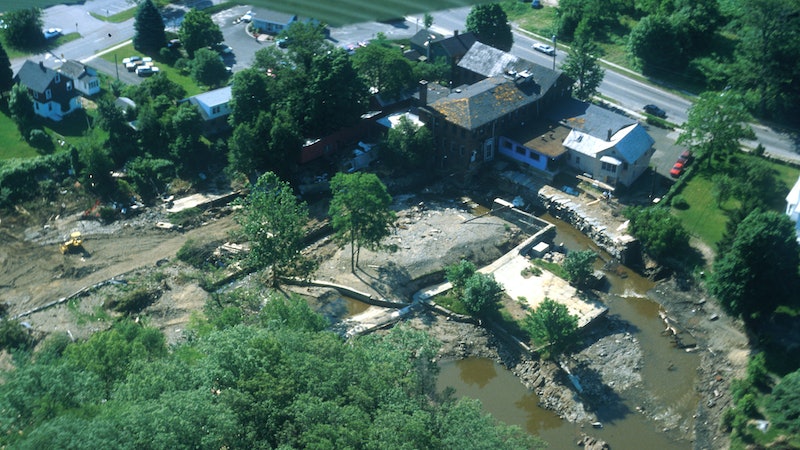 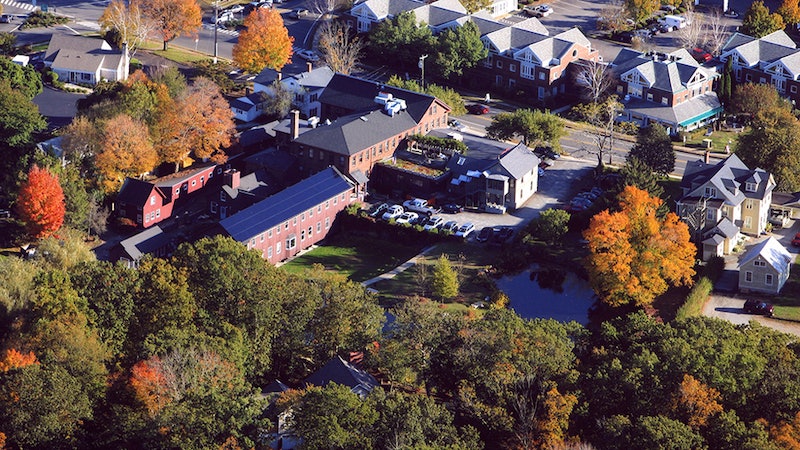 It arrived stealthily. A climatic low with heavy rain settled over Essex and the lower Connecticut River valley on Saturday, June 5th and stayed here for a day and a half. There was no wind to speak of; it just rained hard without stopping for about 36 hours, drawing moisture in off the Atlantic and dumping it here until we’d gotten 15 inches in that short period.

This represented one third of the total rainfall we typically get in an entire year. If that much precipitation fell as snow, it would have been as much as 15 feet deep.

But without the drama of wind, many of us felt no alarm: it was merely raining.

For example, I was having dinner at my home in Branford on the Saturday night when I noticed flashing lights outside. The fire department was pumping out my neighbor’s basement because his sump pump had stalled. In my mind, the problem was not too much rain, but a stalled pump. The next morning I noticed that my back yard was flooded with about 3 inches of water as I went off to play indoor tennis with my Centerbrook partner, Jeff Riley. When I arrived, Jeff said that he’d heard Essex had gotten more rain than Branford; that there was serious flooding near our office complex; our property was under water; and one zealous employee had suggested chain-sawing through our factory framing and flooring to let the “rear end go” while saving the front of the building. That finally got my attention.

Shortly after, as the rain was ending, my wife Penny and I drove to the office and found the National Guard blocking the main road to Centerbrook. We saw houses destroyed or lifted whole off their foundations. We finally reached the office by a round-about way and saw that our entire 12-foot-high dam had disappeared under a wide muddy torrent that was still flowing. In fact, all you could see of the dam was a short two-foot section atop the water. Many of our old factory outbuildings were gone; most notably the old forge, a long barn-like structure behind our main building where our tenant John Furness, a cabinetmaker, had his shop and loft apartment. (As luck had it, the barn-framed roof stayed intact and floated a mile downstream where John found his household possessions high and dry; it was an ark of sorts.) The amount of water, its speed and power were amazing: the beautiful Falls River, a gentle stream, had become a monster that destroyed everything in its way.

In the days that followed we began to sort things out. The office had no power, water, or septic systems. We had been fortunate that our main building was spared, but our back parking lot was now a 30-foot-wide, 12-foot-deep arroyo with water running through its bottom. The flood had not only topped our dam, it had gone around its side to erode a new path in our driveway. The new septic system under our lower parking area was gone. The brand new low-head hydro turbine we’d installed in our basement (the day before the flood!) was under water and there was no longer a pond to feed it. There was now only a trickling stream through mud. 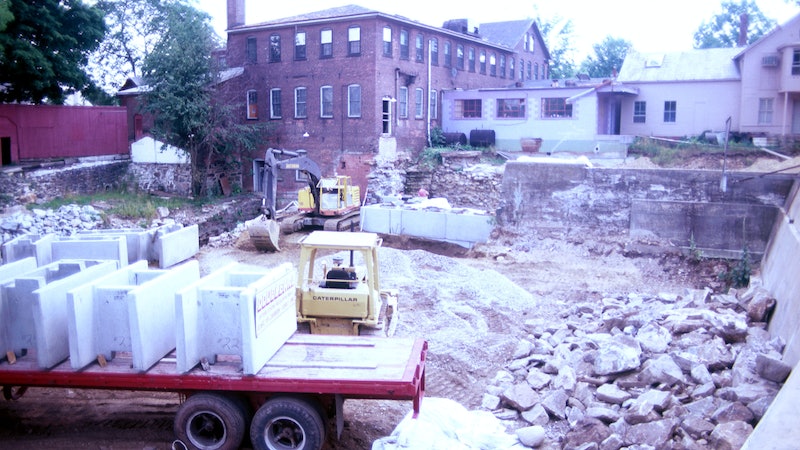 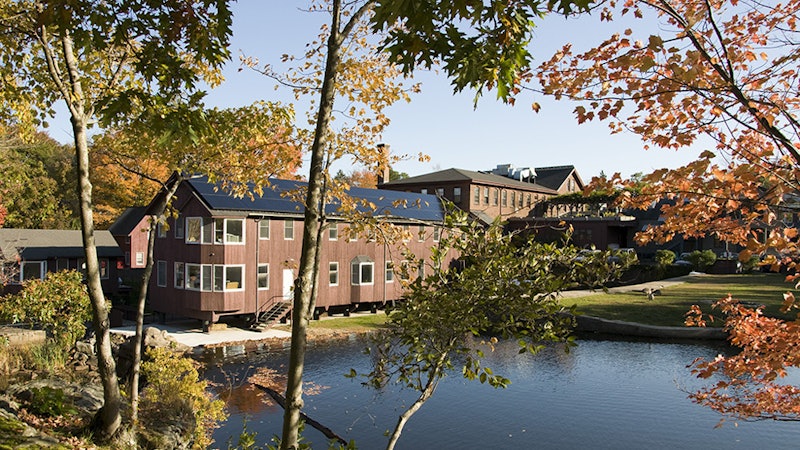 Erosion had occurred in many places along the river, including at the home of Centerbrook partner Bill Grover and his wife Dee. The deluge had transformed their gravel drive into a fast moving river. Indeed, at the height of the flooding on Saturday night, Bill saved a group of tipsy bar-goers who had mistakenly thought they could walk home – only to be marooned on a shrinking island in the torrent at the foot of the Grovers’ driveway. Bill and Dee gathered all the bits of rope they could find in their house (above the basement, which was flooded to its top) and threw a lifeline to the terrified people, pulling them to the relative safety of their house, which was now an island in the stream. In the days to come they discovered that their basement was filled with muck the consistency of yogurt. It couldn’t be pumped or dug; it took a bucket brigade of office volunteers to get most of it out, while they hosed off salvageable lumps of basement stuff and laid them out to dry.

The flood was termed a 500-year event, something that should only happen once every 500 years, but it happened in our time. It turned out that we had six dams upstream from us. All of them were destroyed, bringing down on us not only the rainwater, but also the ponds and lakes they created or filled to bursting. There was debris, too, especially a huge amount of cut lumber that had been stacked high in the Ivoryton Factory yard several miles upstream. Much of that was caught below our dam, tangled in the woods that bordered the Falls River. In a surreal twist, the water roared through a factory that made golf clubs and scattered drivers and irons along the river banks.

A second amazing thing happened in the week that followed. The Federal Government showed up with FEMA emergency crews to stabilize the river and repair roads. Gigantic bulldozers were flown in from the Midwest and they reformed the streambed back to its original location: monsters to tame the monstrous.

It took several years to get back to normal. We and our neighbors raised private money to restore the dam. Large hollow concrete blocks replaced the grass to the side of our dam, with a dotted line of solid blocks above to avoid future erosion. The hydro-turbine was repaired and continues to generate electricity today. In spite of the devastation we managed to keep the office open with the help of many friends and neighbors, most notably the bank next door that let us use their bathrooms while our septic system slowly got replaced. We rebuilt many of our lost outbuildings, this time as offices high off the ground on concrete piers. They were designed to resist a 100-year event. And lo and behold, in 2010 they passed that test perfectly as just such a flood occurred: the waters stayed below our wood structures and caused minimal damage. Once again, the awesome power of water revealed itself; this time we were a bit better prepared. 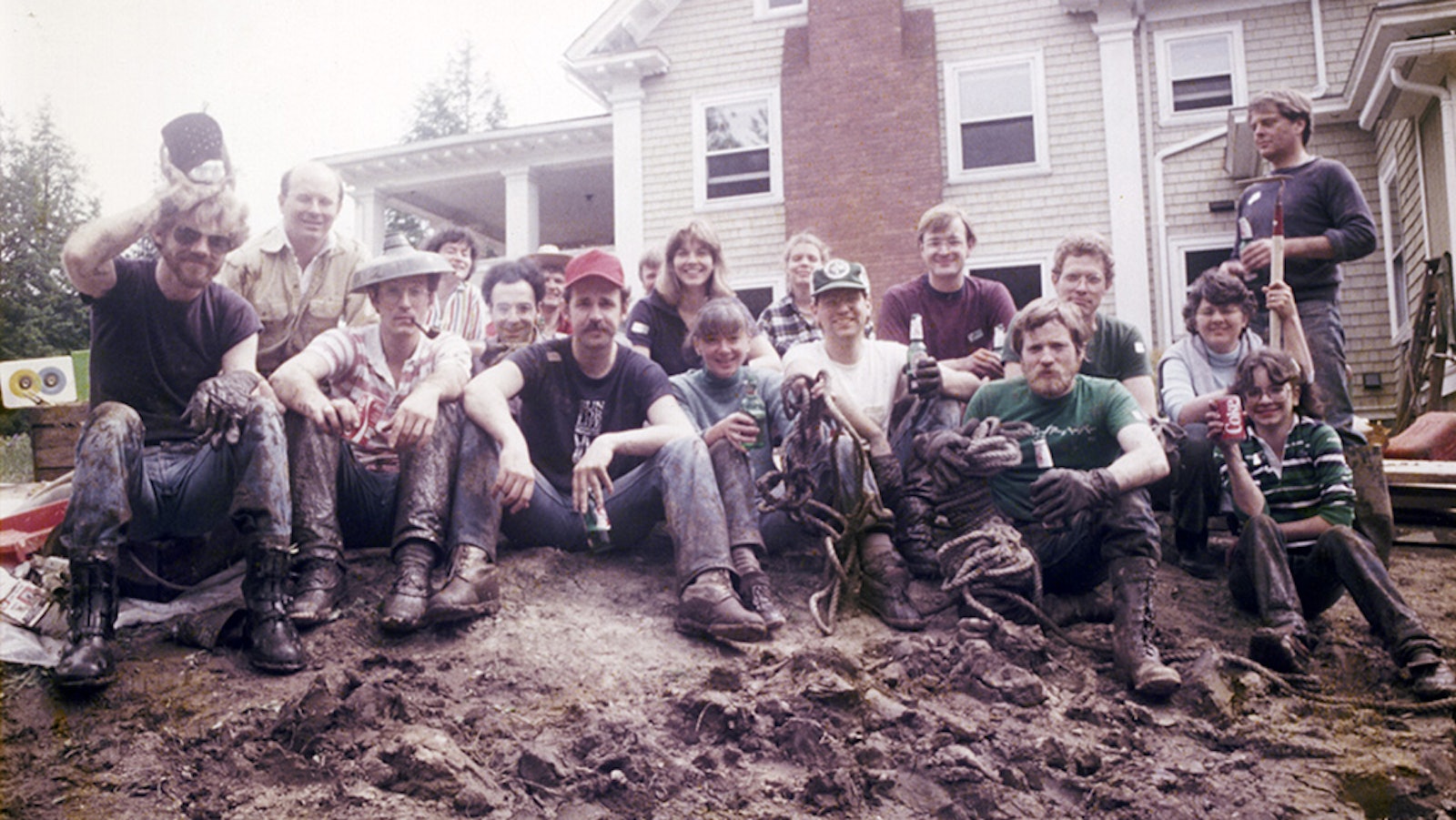