Handsome is as Handsome Dan Does

The original Yale Bulldog, Handsome Dan I (1889-1897), was the first live collegiate mascot, and this month he is reborn and then some. Larger than life and bronzed, he stands guard at Jensen Plaza outside the Yale Bowl – installed just in time for The Game against Harvard on November 19. The Bulldogs have lost to the Pilgrims nine of the last 10 games. Something monumental had to be done, and we were happy to help as part of our work on Yale’s Derby Avenue athletic campus. 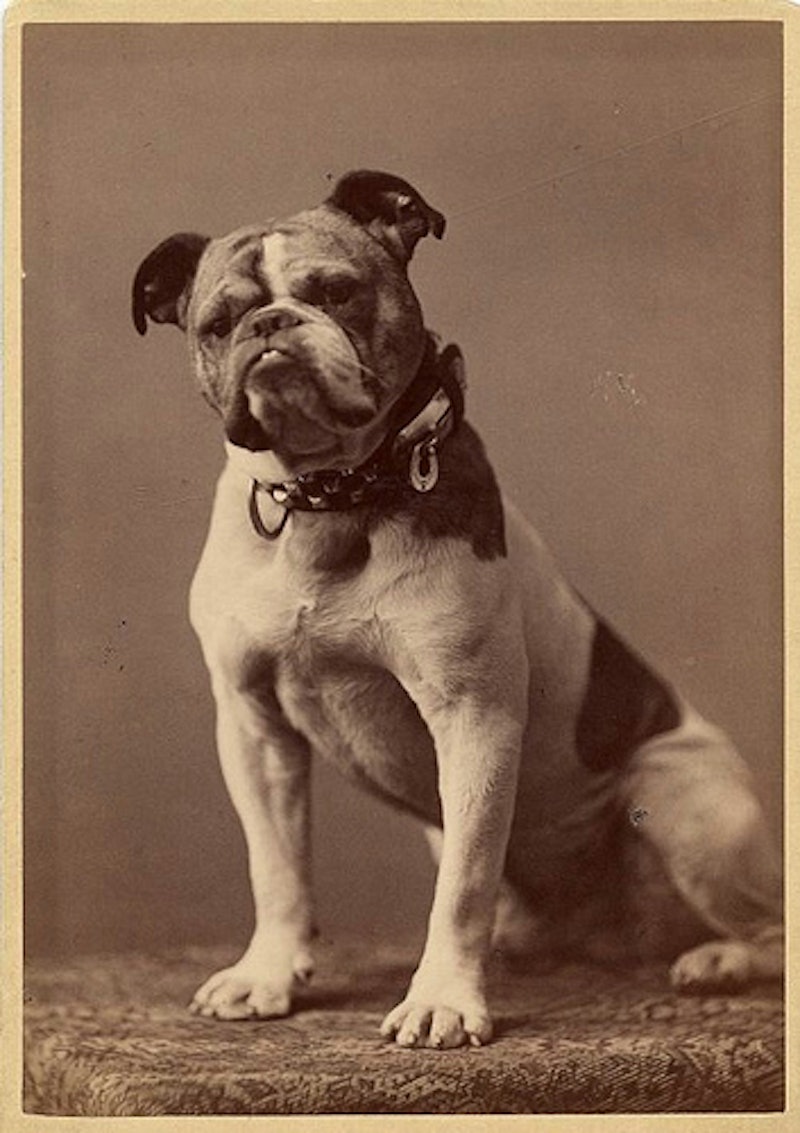 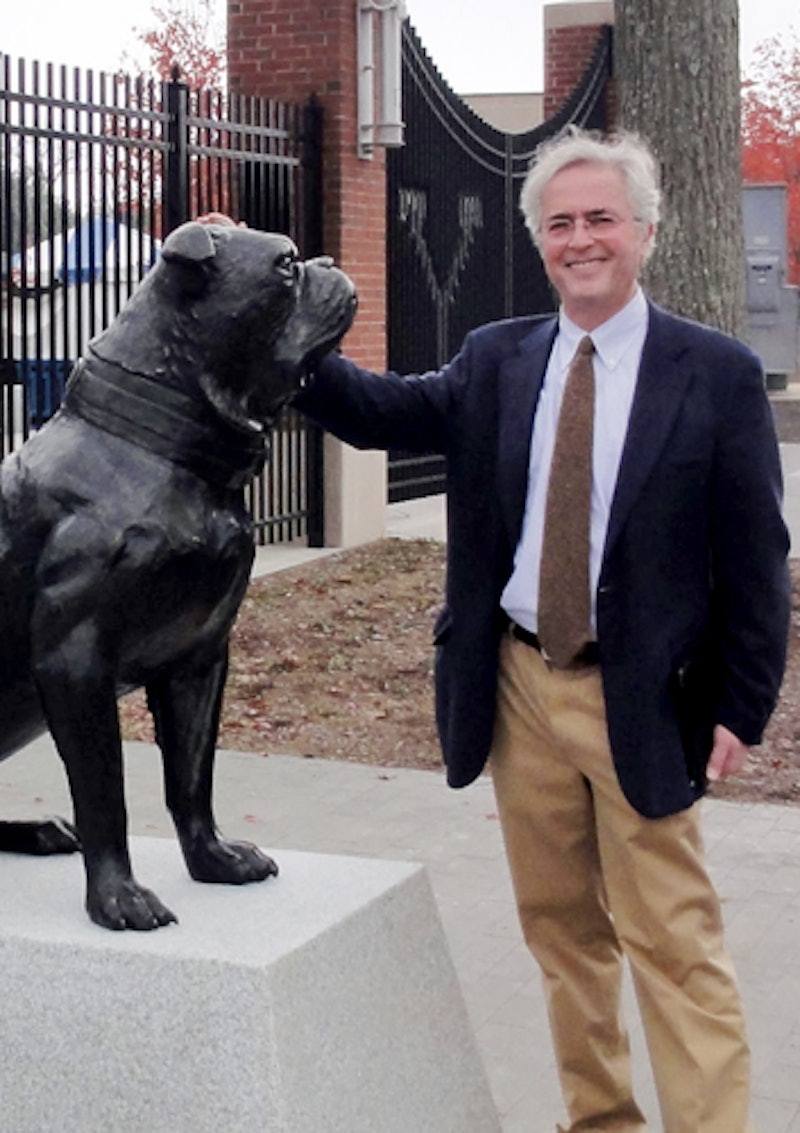 Mark Simon with the newly-installed Handsome Dan at the Yale Bowl.

Handsome Dan I (of 17 in toto) was acquired from a New Haven blacksmith for $65. He proceeded to take first prize in the Westminster Dog Show and see Crimson at Yale sporting events, before retiring to England. After Dan ascended into Blue Heaven, his master, a British Yale grad, had him taxidermied, and returned the fetching result to his alma mater. Dan has remained on display ever since in the Payne Whitney Trophy Room, under the dogged care of Yale's Peabody Museum.

His successors have served bravely: They have graced the cover of Sports Illustrated; fallen off the dock at the Yale Boathouse (Bulldogs can’t swim); survived kidnappings by Cantabs; summered on Martha’s Vineyard; hobnobbed with Pulitzer Prize winners; been ejected from a Yale-Harvard Game (for attacking not just John Harvard, but a mounted policeman); and played dead (when asked if they would rather die or lose to Harvard).

Centerbrook's midwifery in Dan's rebirth has entailed no less of a whelping than his first emergence.

While master planning Yale's Athletic Campus we discussed the possibility of multiple Bulldog icons; so I quizzed my son, Tom, a sculptor. “Dad,” he advised, “modern sculptors don't model by hand anymore. If you want to be up to date, you digitally scan a real Bulldog.” Well, that all became moot in the budgeting process. Besides, real Bulldogs just won’t sit, or stand, for a proper scanning.

Fast-forward four years to when we are considering the new entrance to Yale Bowl with university officials and donors, Messrs Jensen, Kenney, and Reese. The new Jensen Plaza would have the names of all Yale football lettermen engraved in it granite pavers, but everyone felt the need for a more demonstrative greeting. There would be new Y-emblazoned iron gates, but something still was missing, call it essence of Eli.

As fate would have it, we concurrently were working on a master plan for the Yale Peabody Museum, and learned of the existence of Stuffed Dan, as well as the fact that my alma mater, the Yale School of Architecture, had the latest scanning and milling equipment. (Bow Wow) Wow, we had the technology and The Dog. We could scan Dan and reproduce this sitting puppy in bronze at 1.5 times his actual size to make him seem life size in a public plaza. 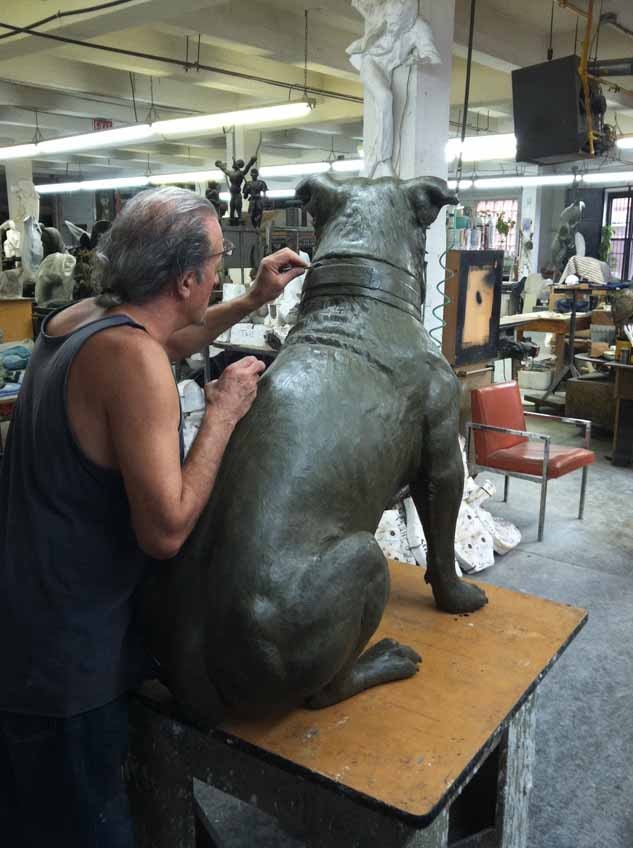 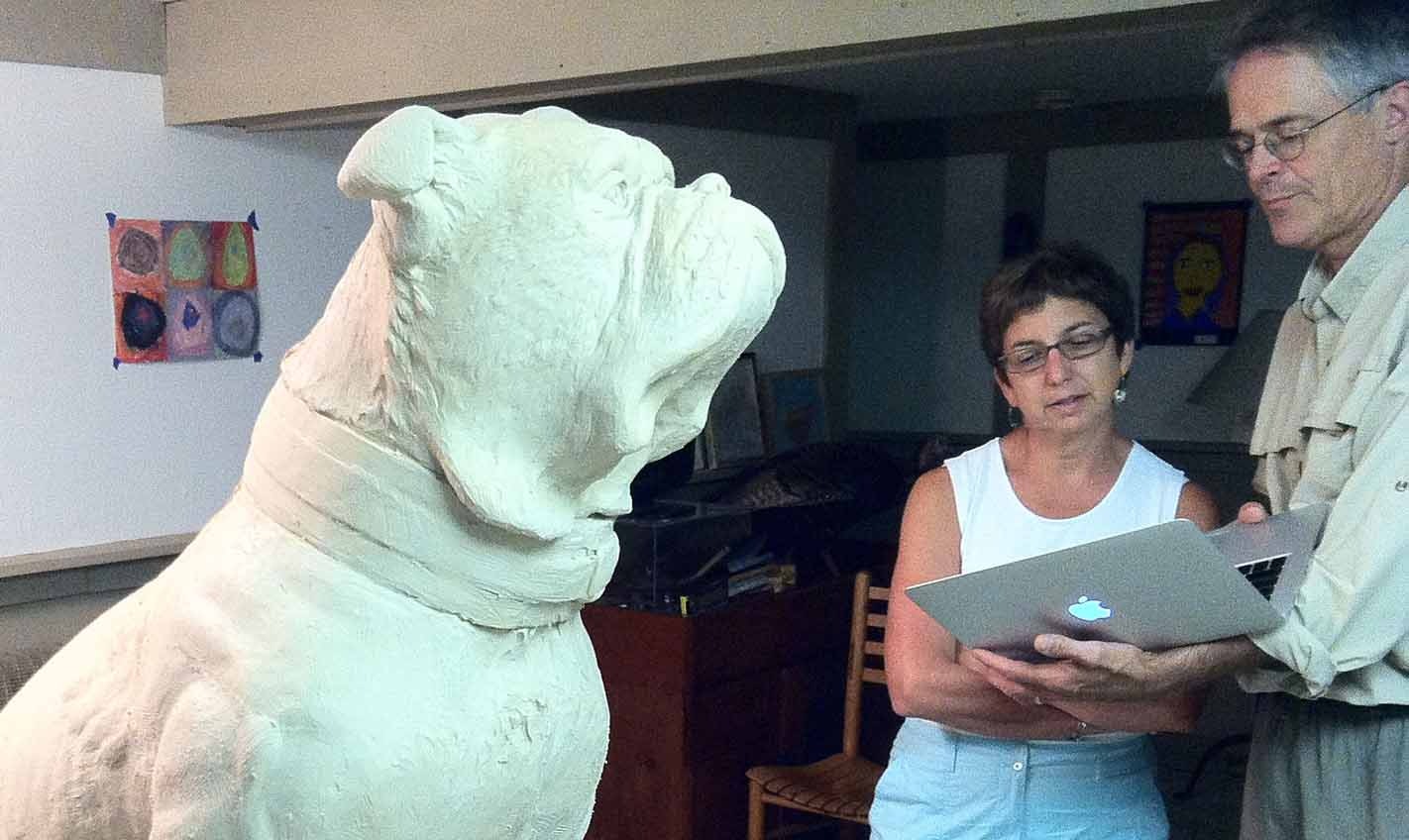 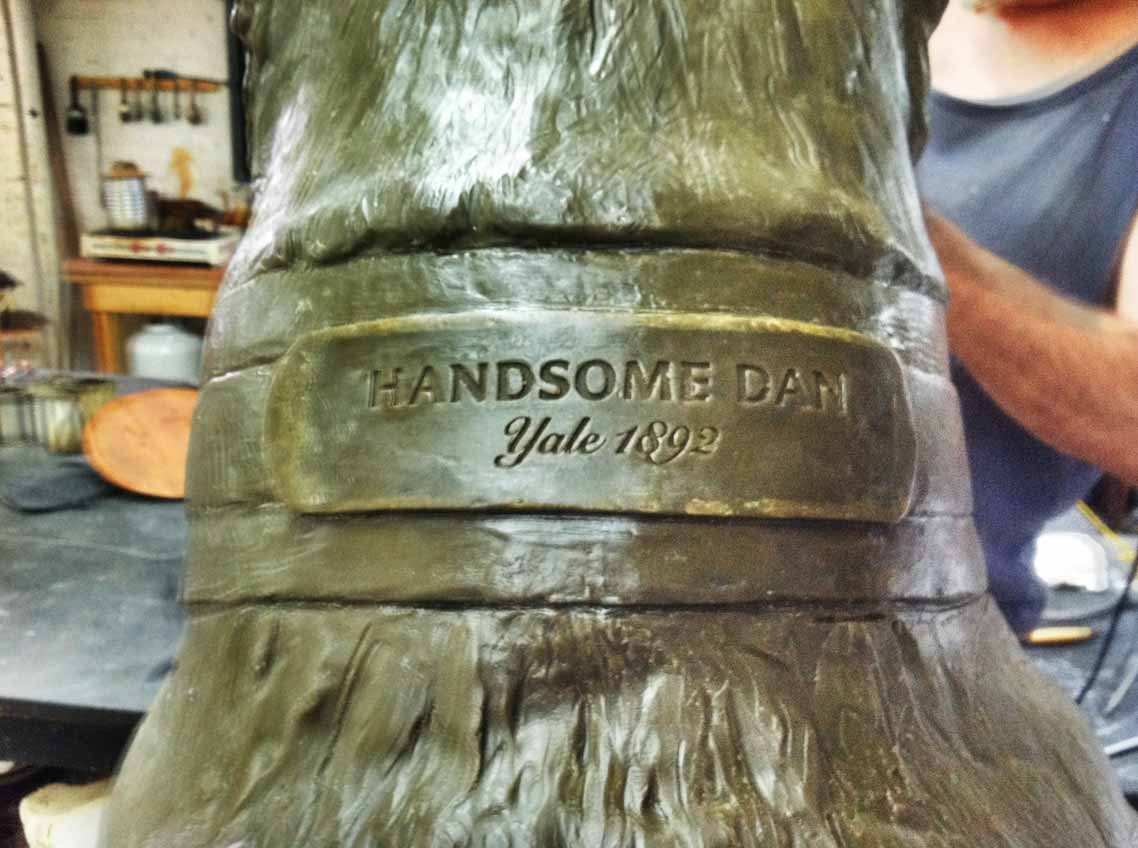 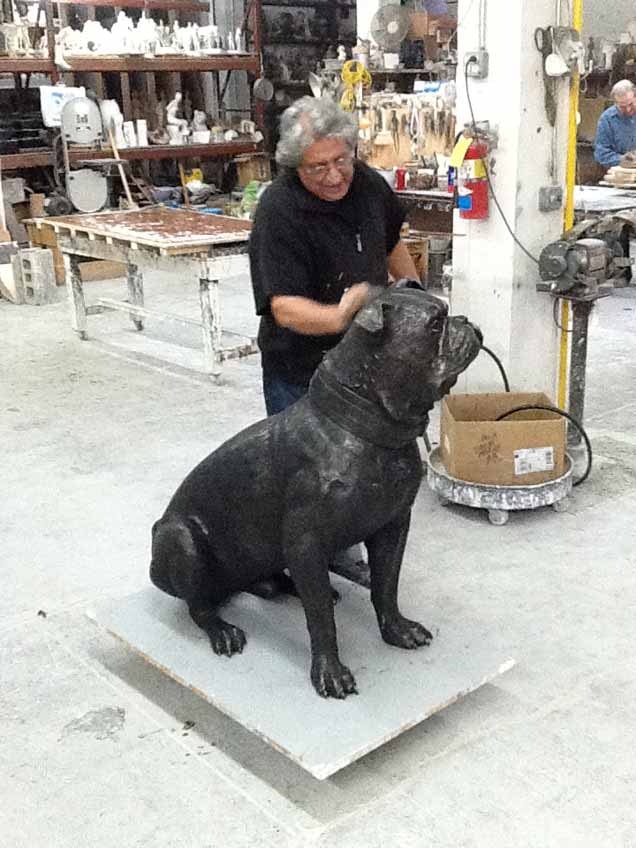 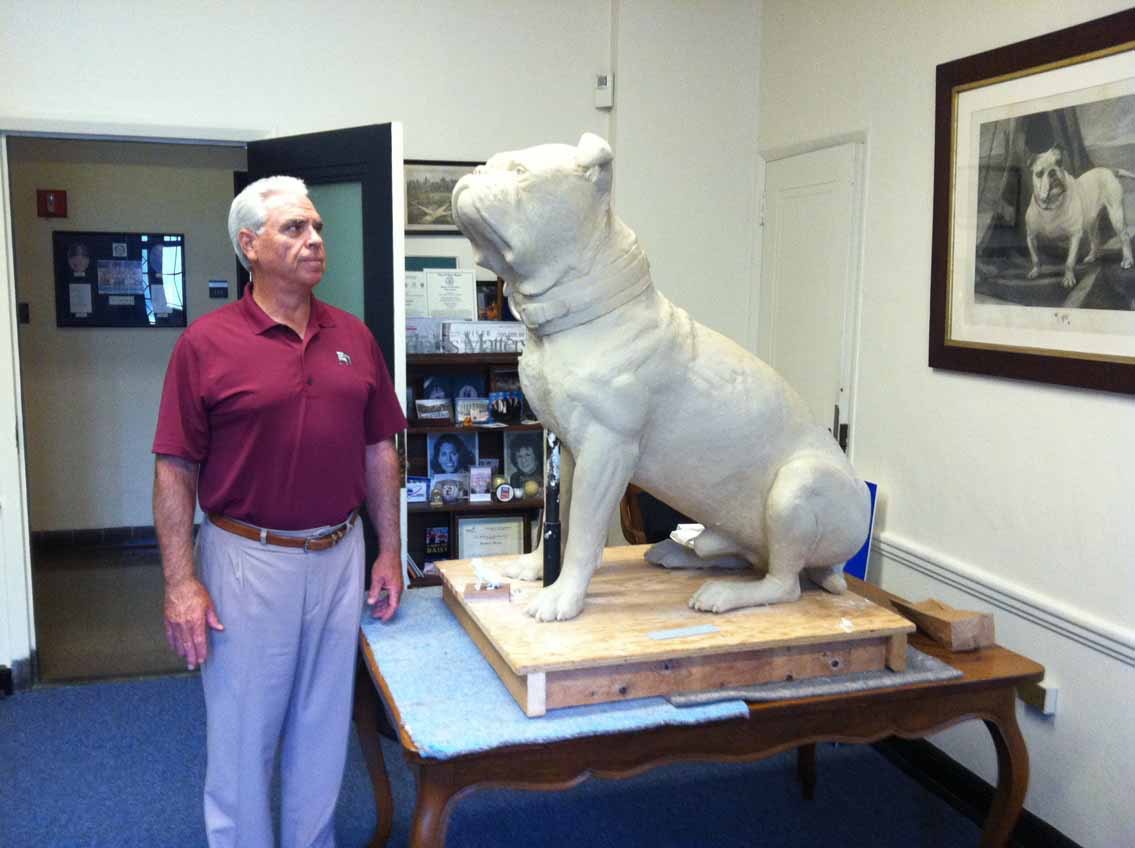 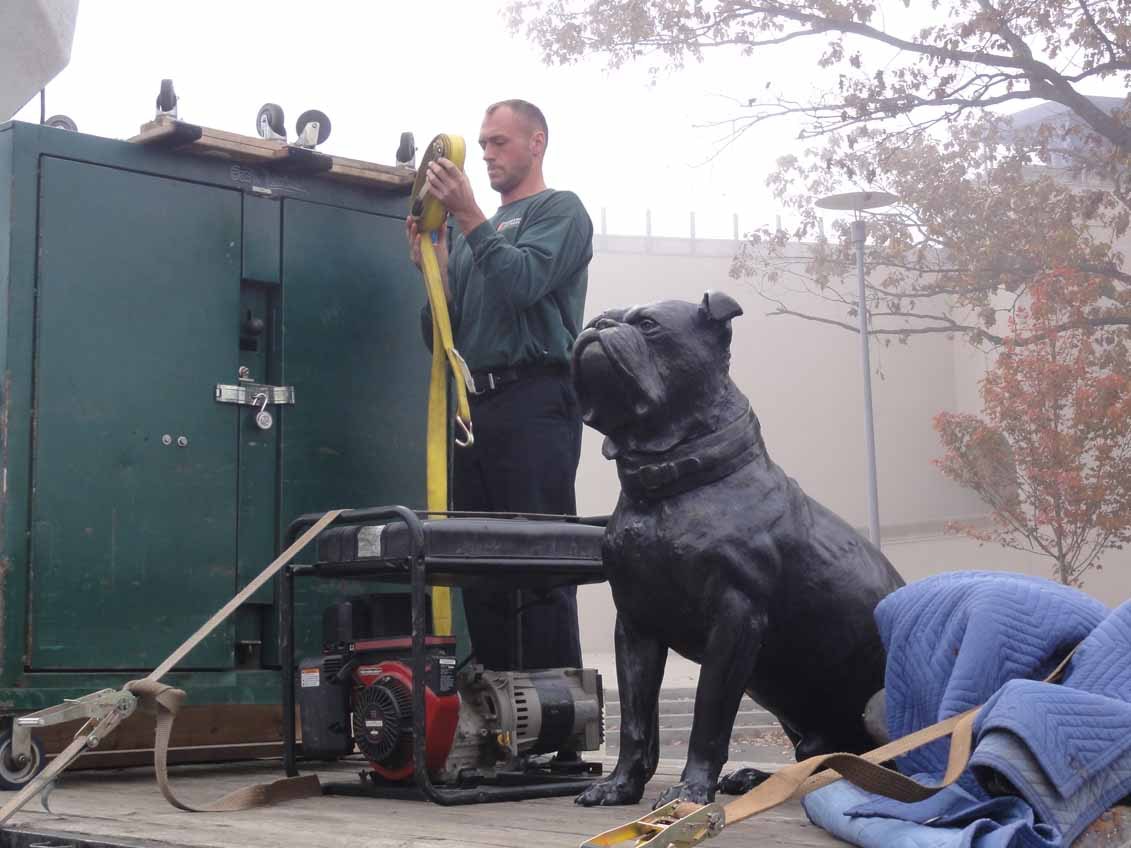 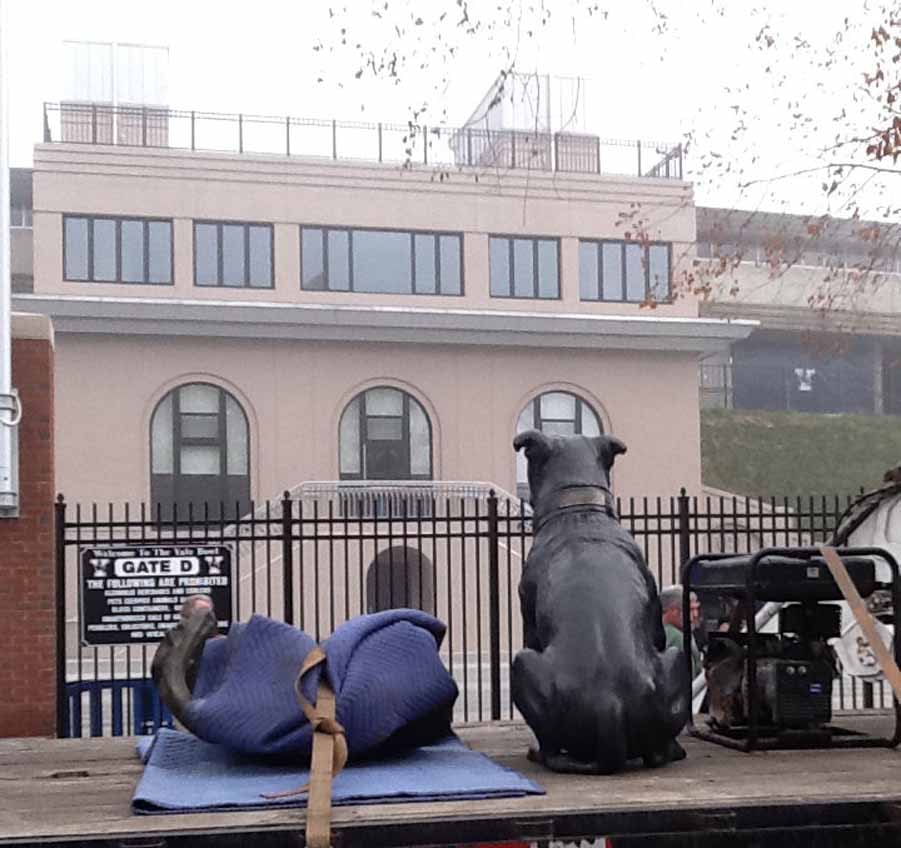 The real Dan at the Yale Bowl – how cool was that? Suddenly, the idea was everyone’s pet project. But, of course, it would be no walk in the park. We needed a pro in the new arts of scanning and milling. Avi Forman, a Yale architecture student, was recommended, and he bravely scanned stuffed Dan, who, to be candid, was a tad rank. On the upside, he wasn’t drooling. The result was a virtual, shiny blue creation; next step milling.

The milling machines, amazing but small, could only produce the dog in pieces – a body of foam with separate plaster extremities. So someone had to dexterously put them together, while also filling Dan out. After all, who is in their prime when old age descends, plus Dan’s 114-year-old stuffing was somewhat dog-eared.

Sue Wyeth, who shepherded us through much of the foregoing, recalled that Michael Anderson, the Peabody's Preparator, had trained as a scientific delineator and modelled the Peabody's great bronze Torosaurus. Michael also is expert in canine anatomy. He put the milled Dan back together and then, muscle by muscle, rebuilt his legs by layering plasticene over the foam and plaster. Dan was now 42 inches high and totally buff.

Next, the artisans at Ranieri Sculpture Casting of Long Island City made a rubber mold, destroying the foam-plaster creature in the process; then they used the mold to make a hollow and reproducible wax model ready for final casting. The wax was covered with an “investment” mold, a cement mix that can take the heat of molten metal. With the wax burnt out of that second mold, the metal was poured in and became our Iconic Dan.

Last week, bronzed Dan was ready for the final touches, his coat of patina and wax. I went to see him at the foundry and wagged my finger at his master caster, Dom Ranieri, “You did it, Dom; this dog is beyond handsome. He’s noble!”

If the sons of Eli beat Harvard this year, panting Yale fans will be belting out “Bulldog, Bulldog, Bow Wow Wow” and scratching Dan’s bronze ears for luck.