They had to design and build a chair, from scratch, despite minimal woodworking experience. It sounds simple enough, but is really quite devilish.

The continuing workshop is a reflection of the firm’s devotion to craft, to a sense of the handmade, to the beauty and humanism with which we endeavor to imbue all of our buildings. All told, 17 people have run the chair gauntlet.

The results and the rationals follow, including a free verse homage to one of the most basic of hand tools. Descriptions below by the chair-makers themselves.

Chair class was for me, if anything, a good excuse to learn the tools and the trades of the illustrious woodshop. I had access to a similarly sized shop at school, but since I chose to neglect those privileges I figured it would be stupid to pass this opportunity up. And as happenstance may have it, my curvilinear chair was the perfect segue into taking over the shop (metaphorically of course, although Nick Ficaro jokingly might aver otherwise.)

The chair began with eight boards, all almost twice my height, of African Mahogany (the project would’ve begun with me cutting the tree down myself if I thought I could get away with expensing a trip to Madagascar). The boards carefully were whittled down to 27 little boards, all almost half my height, and then laminated into the nine curved boards that make up the whole of the chair.

As I’ve explained to many people, this chair is both deceptively simple and deceptively complicated. Now that two chairs (the final and the prototype) have been crafted, creating subsequent chairs would not be a difficult task. Yet at the same time, the steps taken to produce each piece of the chair are very specific, and have to be calibrated (eyeballed) very carefully. And then putting the pieces together, because of the angled faces, is another trick in itself.

In the end, I’m very happy with how the chair evolved: Is it a barrel? A flower? The collar of a villainous fiend? I am happy, too, with the process that, with the help of Bill Rutan, brought it to life. 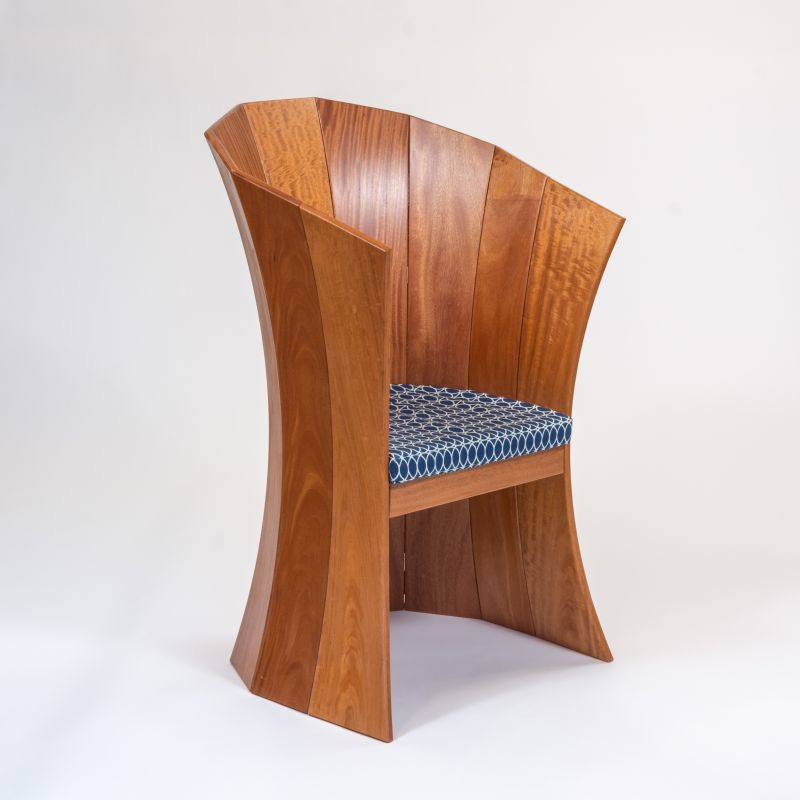 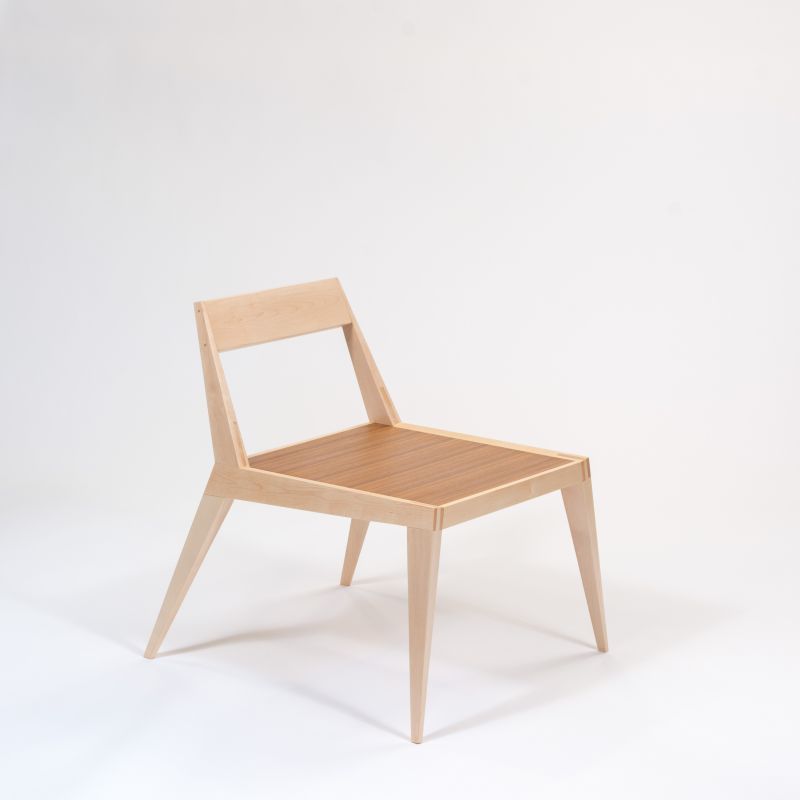 My initial design was vague and very conceptual, much like a cloud. It would be a simple lounge or coffee table chair, but elaborate in its shape and interconnectedness. My cloud was more involved and complex than the finished chair that I eventually completed months later, but as I modified the design to match my modest woodworking skills I tried hard to hold onto the spirit of my imagining.

The first challenge came when I began the actual organized process of building, of crafting the chair. I realized that my original design would have many joints and angles. More than I was capable of executing, even with the help of Patrick, Ron, and Bill. A skilled woodworker could have produced my cloud in all its complex vagueness. Not I, not yet.

What looks simple often is not. I made two life-sized models and changed them more than a dozen times. I changed the height and angle of the seat back. I changed the length of the seat and the angles of the legs. I showed my wife a mockup half way through. She was doubtful.

As demanding as this effort was, it was something I had always wanted to do as an architect: not only to design something alone but also to finish it myself. This was a great opportunity, one that few architects get. It was even fun. I gained greater respect for carpenters and craftsmen. Chair making may become a hobby of mine. It will be more fun when my woodworking skills improve (in that regard, there is nowhere to go but up).

The reviews are in. I like my chair. My wife came around, too. My son and daughter said it was “Cool, really cool.”

My design intent was to create a comfortable chair perfect for lounging in with a beverage while enjoying a great view. So I looked to two chairs for inspiration, a fabric deck chair and the IKEA Poang chair. I was intrigued by the idea of a suspended fabric sling supported by a strong but lightweight bent-wood frame.

The chair is a mix of wood species, ash for the arms, Baltic birch plywood legs, and cherry accents and dowels. To determine the correct proportions for the chair, I first created a full-size adjustable mockup that allowed me to change the height and location of the sling to achieve a comfortable fit. In addition to the full size mockup, I used Revit and the Maker Bot to 3D print a scale model to understand how the chair would come together.

The bent wood arms started as a piece inch-thick ash, which was sliced into three ¼-inch slices. They were then clamped to a curved form and glued up to a final overall thickness of ¾-inch. These were then tapered and given an eased edge with the router, a shape reminiscent of a ski. The legs were cut from sheets of Baltic birch plywood. The front support for the sling and lower brace were tuned on the lathe out of cherry. The lower brace has a subtle tapper from the ends to the middle. For its durability, I chose a Sunbrella acrylic fabric for the sling and finished the wood with multiple coats of polyurethane. The sling supports are connected with removable fasteners to allow for easy removal and cleaning of the fabric.

The process of seeing a design go from sketch to reality was a valuable experience. Having Ron, Patrick, and Bill guiding us was a great way to learn just a fraction of their vast knowledge base. In the end, I believe the chair was successful in creating a comfortable place to lounge in and watch the day unfold. 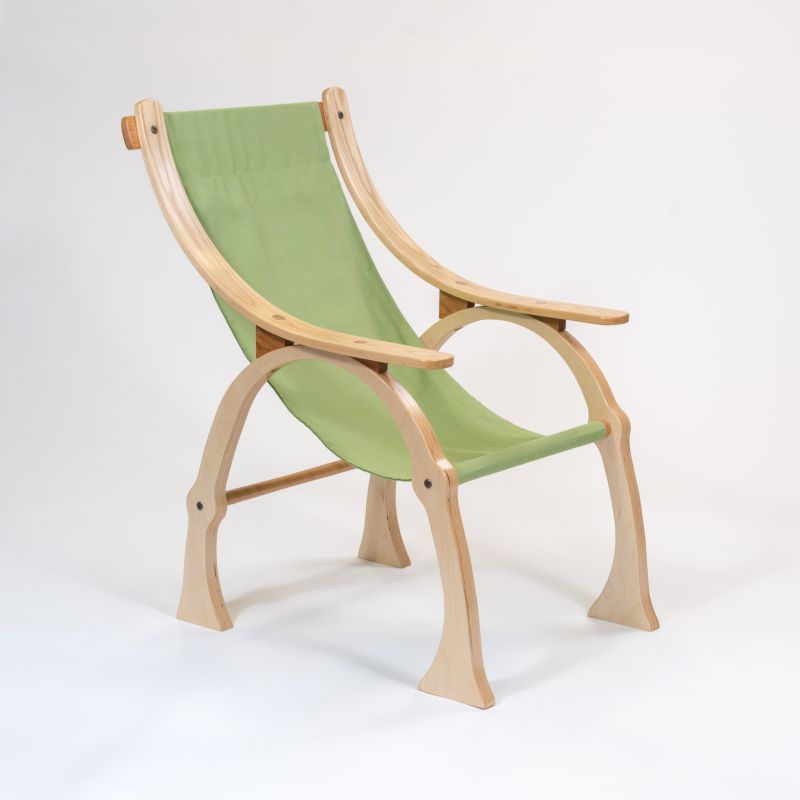 For as far back as I can remember I’ve been an avid motorsport enthusiast with a profound fondness for the fluid curves of a Recaro seat. My affinity for motor vehicles goes beyond aesthetics, recognizing the need for a structurally sound frame to provide the foundation for an aerodynamic shell that work together in perfect symbiosis. In the case of my chair, both components are made of the same material though different in function and form: as such, my chair has been aptly dubbed “Schumacher meets Stickley”.

My first priority was comfort; all the curves and geometries had to be just right. At some point, when it was too late to back out, I silently acknowledged this was a tall task to undertake as the sum total of my prior woodworking experience was hanging wooden picture frames on a wall.

Being incredibly process driven, the recurring question was where to start on something that seemed to have no obvious beginning or end. Difficult to draw to precise scale is an understatement. Employing the benefits of 3D modelling in Revit, I was able to develop several alternates of the seat geometry from which I created four scale models using a Makerbot and a laser cutter.

I contemplated cold-formed plywood and the techniques used in boat building, thinking that this would be the best way to get the compound curves that I was seeking. I created a full-scale biaxial form from one of the 3D models and began to lay veneers at a 45-degree angle to my formwork only to realize that the spacing on the form was too far apart and the curves were much too tight for the compound curves that I sought. So back to the drawing board I went: i.e. the mouse and keyboard.

The digital model afforded me a forgiving trial and error process of manipulating the alternatives and considering various methods of construction. I eventually settled on a form of laminated construction, and then cut section profiles at ¾-inch centers through the entire width of the seat. Using 1" x 4" poplar, glued to match the recline angle of the seat, I band-sawed two sets of 14 distinct profiles. These were glued and clamped two at a time, till the rough shape of the seat appeared. I used a carbide grinding disc to roughly blend the profiles; then it was on to roughly 25 hours of hand sanding. The edge profile was cut with a jigsaw, shaped with a rasp and also hand sanded. Three coats of polyurethane later, I watched the seat come to life.

My intent with the frame was to create an anchor for the fluidity of the seat, thus the dark and linear 5/4-inch black walnut. The frame components were all planed and jointed and all the fasteners strategically located out of sight to reinforce the simplicity of the form.

This experience has enriched my penchant for architecture and has equipped me with a true appreciation for the fine craft of wood working.

In the past several years, a number of Japanese architects have turned to variations on traditional joinery in the execution of contemporary design. Japanese joinery is a highly refined craft in which each joint carries a history, an oeuvre, and a significant challenge to the skill of the craftsman.

One joint seems to be of particular interest to contemporary architects, the 6-way joint or Rokujou. The traditional form of this joint is somewhat impractical for current use. Its form is not easily achieved with modern tools, and the delicate interlocking tongues do not provide a rigid connection. As such, its innards have mutated with new techniques and technologies while maintaining its outward form.

The form creates an elegant transition between an ancient history of craft and the shorter recent history of contemporary architecture. It resonates with the repetition of industrialized fabrication, the grid of high modernism and even the more recent blob-like forms of computer facilitated NURB objects.

This joint excels at being two things at once. It is traditional and contemporary. It is a single connection that is able to multiply into an entire system. It is rigidly ordered and yet able to take on the ephemeral appearance of an evaporating cloud.

It can be almost anything, even a chair. 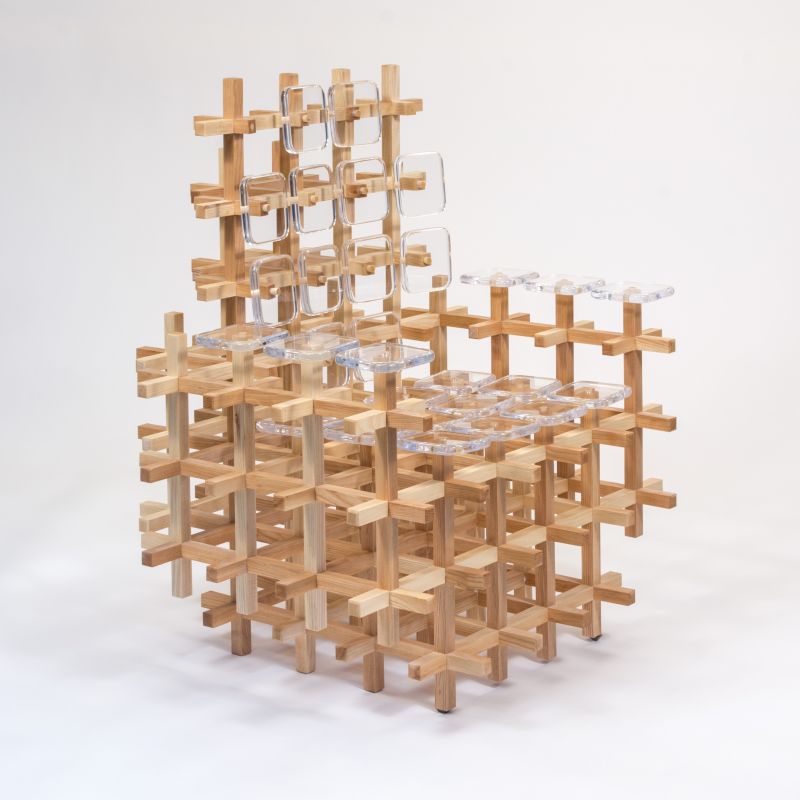 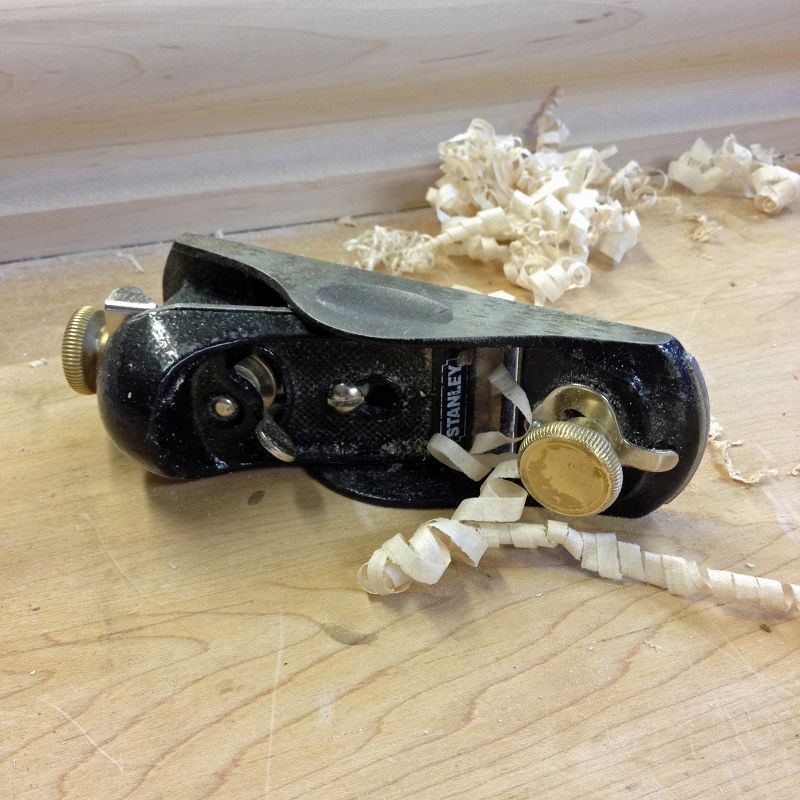 One of my favorites

It’s practical and useful and durable and stable and solid and requires no software.

It looks good and feels good.

It requires patience and care to keep it in good working order.

Get a plane, make a chair.

Use them, take care of them. You won’t regret it.