Our own Ben Mayne recently won a design competition, and his entry has since been published by ArchDaily, the world’s most visited architecture website.

Ben and partner Abraham Francis earned the Adaptability Award from the HOME Competition 2019, an annual challenge conducted by Arch Out Loud that invites designers to explore ideas of domestic architecture for the future. Ben and Abraham’s entry, titled Ensaterishentohsa Ne Ohontsia (translated: To Rest the Land) was one of four category winners in this year’s competition. 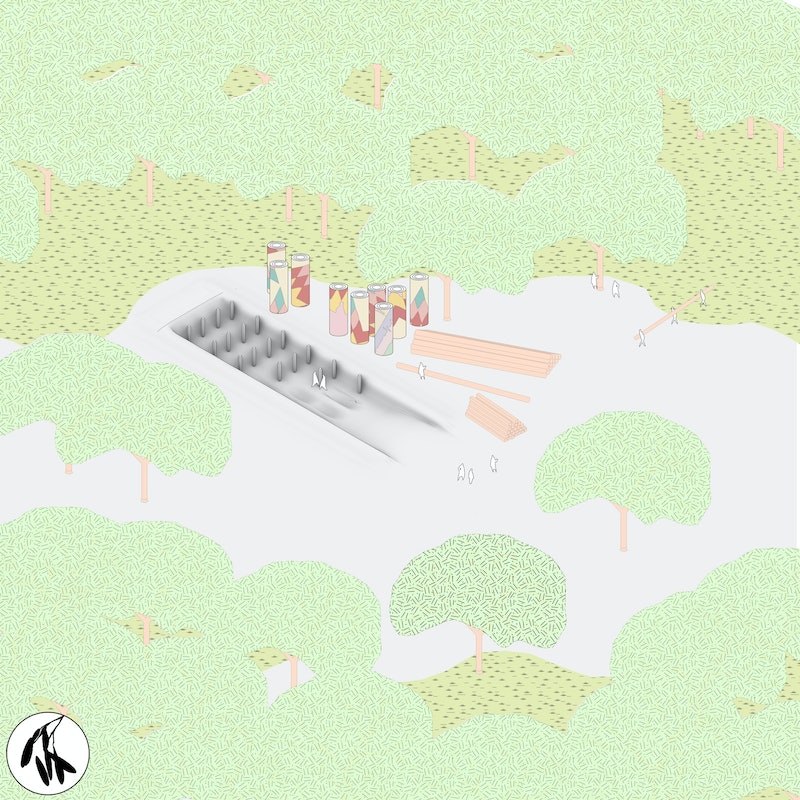 The Kanienkehaka community begins a new cycle of relationships with different lands that have resources to share. The grounds are new, but the ecological relationships and knowledge are known to the people – a gift from their ancestors. It is the start of a new home – until the next cycle begins. 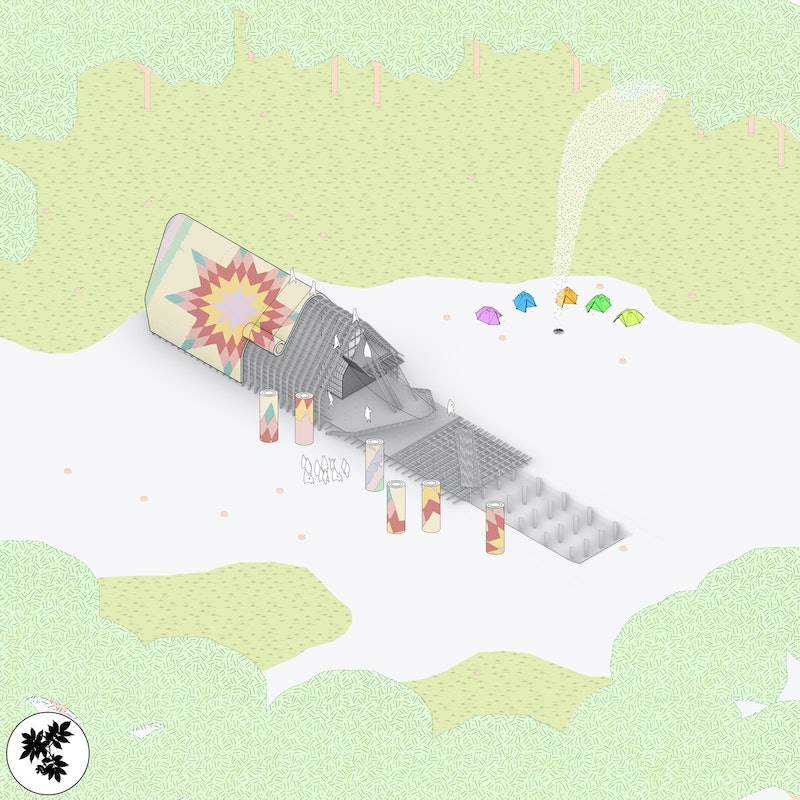 The construction of the new home brings the community together. During this process, the knowledge of constructing both a home and a relationship with the ecosystem passes from one generation to the next. All are involved in rolling out the precious heirloom blanket – a translucent quilt of spun glass – as a part of the maintenance and transmission of intergenerational knowledge and identity.

“It was a design that we had been working on, and when we found the competition, it was a perfect fit,” Ben said. “For me, the design was about developing an architecture by examining traditional Haudenosaunee crafts, aesthetics, and methodologies – acting on the time-tested knowledge of a place-based culture in an attempt to create something that exists as a part of its environment’s ecology. Abe’s influence and advice were invaluable in helping me truly understand the material I was trying to evaluate, and in challenging my biased perceptions and assumptions. Native voices are too often excluded from conversations even involving their own cultures, and his involvement was crucial in producing something successful and authentic.”

Ben went on to explain how the Haudenosaunee, a confederacy of six Native American nations including the Mohawk, were traditionally a semi-nomadic people that established and inhabited a village until the natural resources were exhausted. They would then relocate to establish a new community and let the previous habitat regenerate.

This is not the world left to us. It is a place of poisoned soils, dying forests, and fouled streams. For centuries, colonialists have burned, extracted, and stolen what they please, feeding an infinite hunger with finite resources. This project reconceptualizes sustainability through the Haudenosaunee semi-nomadic tradition, envisioning a home designed to be deliberately abandoned and re-consumed by its environment, feeding and recognizing the perpetual cycle of life and death. The structure is both a home and a cultural device, each successive generation passing crucial knowledge to the next through the act of rebuilding. The swaddling star quilt is the only permanent object, a cherished gift to be maintained over innumerable years and sites, linking each generation to those that came before. 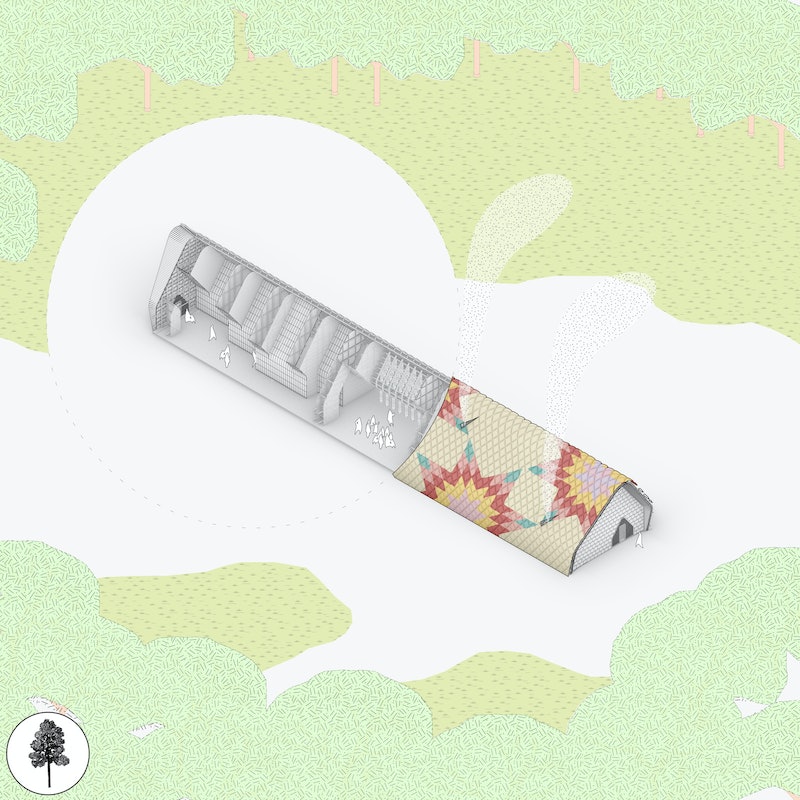 The new home is complete and the community expands into building relationships with the local ecosystem. The community learns, shares, and fulfills their roles and responsibilities to Creation and each other. By gathering medicines, preparing white corn, and practicing other land-based knowledges and relationships, the community acts as a part of the environment. 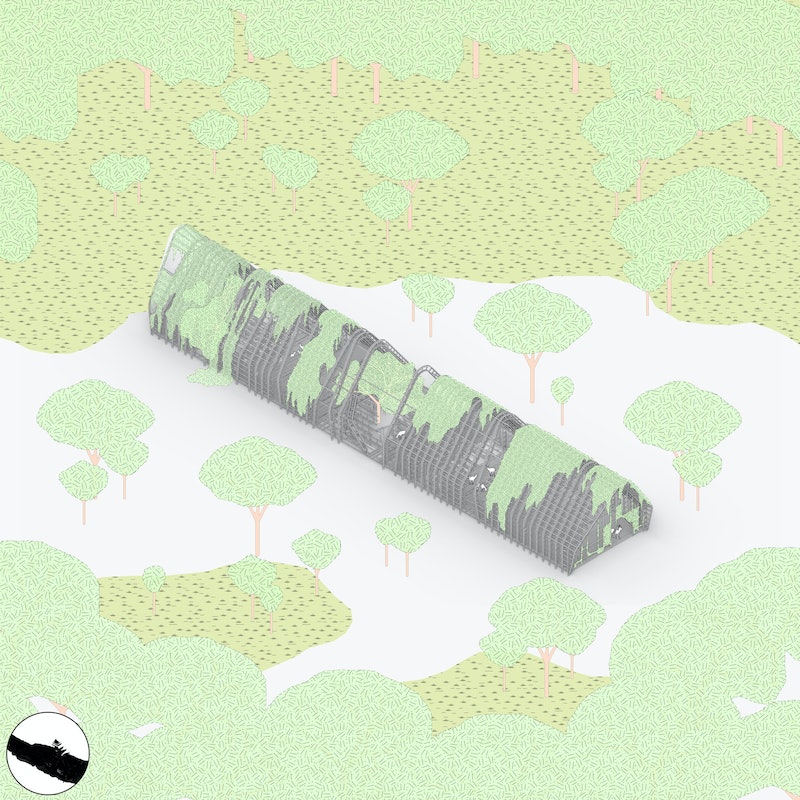 The Kanienkehaka community knows when the land needs to rest, and removes the protective heirloom quilt to begin a new cycle. The forest swells, reclaiming what was borrowed from it. The decay of the wooden structure will enrich the soil, feeding a new generation of trees, and sheltering deer and other relations. It is not the first, nor the last time.

Ben joined the Centerbrook design staff in 2018 upon completion of Cornell University’s top-ranked Architecture, Art and Planning program. He has primarily worked on the firm’s design for a new high school at Greenwich (Conn.) Country Day School.

Abraham is a member of the Mohawk community of Akwesasne, and graduated from Cornell in 2014 with a bachelor's degree in microbiology, and in 2019 with a master's in natural resources. He currently works as the Environmental Science Officer for the Mohawk Council of Akwesasne developing ecological renewal and analysis programs to benefit and engage his community.

Renderings and captions by Ben Mayne and Abraham Francis.