We’re launching a new web feature that will see the five principals of our firm sit down and discuss their projects in an interview format. While we anticipate many of these will serve as an introduction to newer projects that are on the boards or under construction, we may go back in time to take a closer look at some of our more significant designs.

Without further ado, here’s my discussion with Jim Childress on his team’s design of the new New Canaan Library, which currently anticipates construction startup in early 2021.

Jason: The design has been described as an ode to the rich architectural history of New Canaan. Please explain the overall direction of the design, and how it harkens back to the town’s famed mid-century residences.

Jim: During our community workshops we showed examples of different libraries that ranged from traditional to modern – the vote was pretty split. As we dug into it deeper, most middle-aged people leaned towards traditional buildings – brick, white windows, and a pitched roof. What we found intriguing is the older and younger participants wanted something more modern. We had about 50 people in the workshop. The youngest was 17 and the oldest, I believe, was 87. Both spoke passionately about how the library should be forward thinking and forward looking.

In hindsight it seems rather obvious – the new library should build on the local mid-century modern architecture. Not exactly the 'traditional' architecture some liked, but it is deeply rooted in the spirit of this place.

Architect Fred Noyes gave a wonderful lecture at the library. He compared the Eliot Noyes House, where he grew up, with Philip Johnson's Glass House. The Noyes House is inspired by family living and creates a stone and wood enclave in the forest. The Glass House is more of an art piece inspired by world culture, and it floats in the landscape. We thought the combination is really fitting for New Canaan and for the library. So, we basically put one on top of the other.

We hope the building conveys a sense of family and community, but also enables you to look outside, beyond what’s right here. Out into the town, but also out into the world, so to speak.

Then there are references to the environment. We all liked the idea of using stone. There’s of course a strong tradition of handmade stone walls in Connecticut. The intent is for the façade to appear similar to dry-laid stone walls. We’ve also introduced tree-like elements into the glass curtainwall, and the roof shape is ridged a bit to represent the glacial landforms of Connecticut. 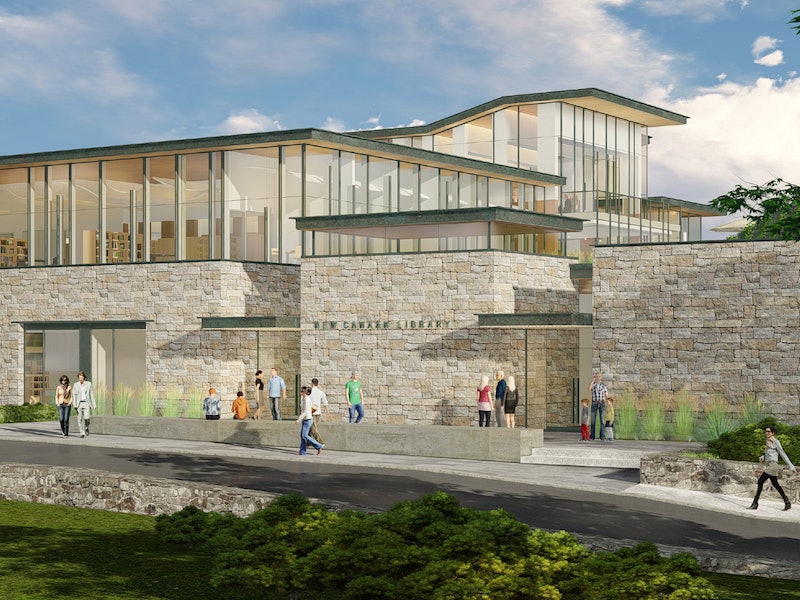 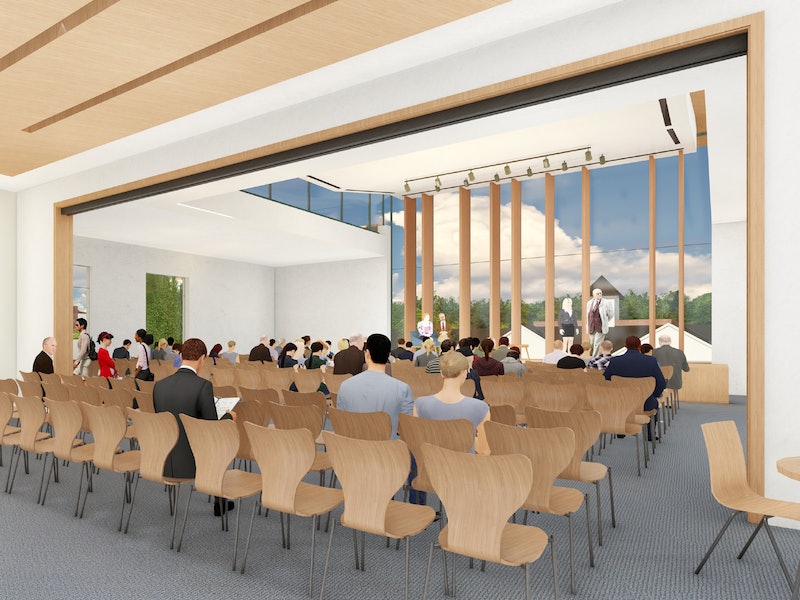 Libraries are a personal interest of yours, and you’ve studied and visited many worldwide. How was that accumulated knowledge incorporated in the new New Canaan Library?

The biggest thing that I’ve taken from visiting libraries around the world is that they’re all community-based. Whether they’re designed for it or not, libraries are in a customer service business. They’re providing the community with what it needs for life-long learning, with things you can’t get elsewhere. It’s the one free place you can go to learn, hang out, visit with someone, discover something. And to be relevant, they need to be different for each community.

We therefore focused on what the community wants and needs. Compared to other communities in Connecticut, statistics show that New Canaan residents read a lot. So, we’ve placed books right up front, including new releases, akin to how they’re displayed in a bookstore. And about half of the collection will be in the children’s library.

We also discovered this community needed places to work, therefore we have a small business center and workspace modeled on WeWork. Likewise, we are providing teenagers with their own place to study, make stuff, and meet with tutors.

The number of programs New Canaan Library offers are also among the highest in the state, so we have a variety of spaces to facilitate those different needs. A combination of larger spaces and smaller spaces that can accommodate concerts, lectures, discussions, gatherings of all types. It was designed in a really flexible way. We opted not to have an auditorium with tiered seating to preserve that flexibility. We also have a large kitchen for teaching cooking, which extends the idea of providing life-long learning.

To go a step further, can you share a few more details about these different spaces that may not yet be known to the general public?

From a basic layout standpoint, there’s a program wing and a library wing, and a lobby between the concourses. This allows the program wing to operate with different hours than the library wing for after hours events.

The children’s library on the lower level has a variety of age-specific spaces, from an area for toddlers through junior high and high school. There are different levels of service for each age. For example, the teen area has its own librarian. The maker space – popular in the current library – will have a separate area in the new facility for easy access by all ages. The business center I previously mentioned, is a place where residents without an office can come in to work, and even use the smaller conference rooms to meet clients.

We also created a living room. It’s a place you pass through on your way to the main collection in the upper floor. A place to see and be seen, for extroverts to hang out. It’s good for smaller gatherings and programs. It’s the type of space that’s missing in many libraries. Some libraries will have a huge atrium, and a couple of people will be in there, but most just pass through it. Other libraries don’t have any space like it all. We thought it was really nice to have a family room for the town of New Canaan. It has a fireplace. There will be a nice collection of furnishings by different designers from New Canaan.

The concourse is modeled more on a bookstore or a café, the living room is influenced by a hotel lobby, the community workspace is upstairs. The program spaces are all influenced by what we’ve learned creating flexible spaces for schools. It’s learning from all of those public buildings you go to, and creating a place that’s empathetic for that diversity of patrons. 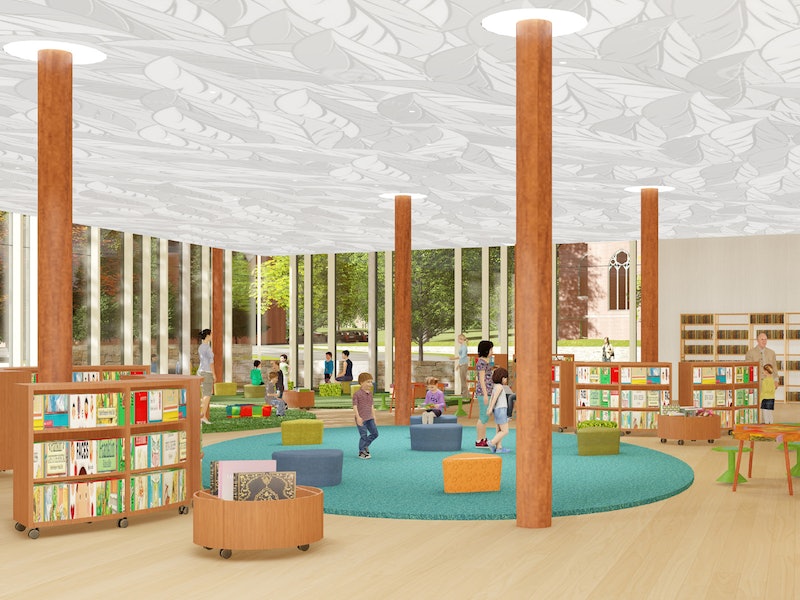 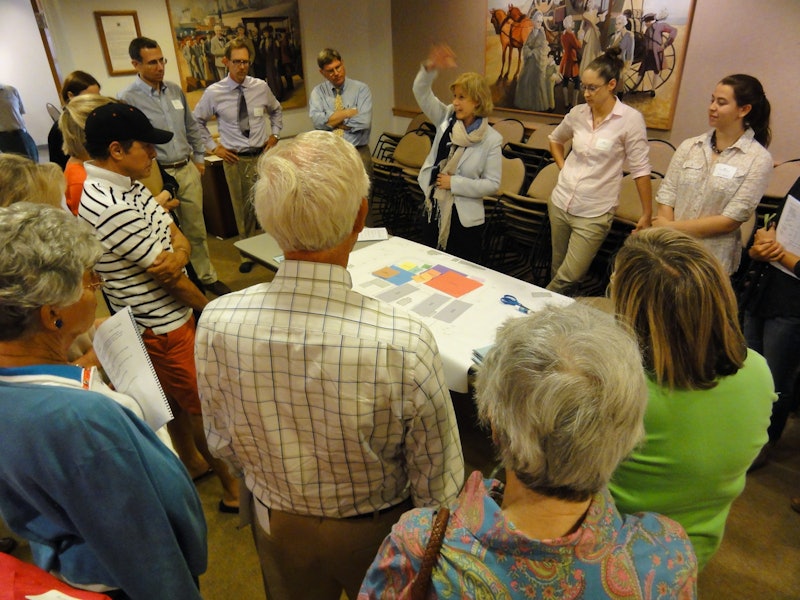 Please take us behind the scenes a bit on how the library charted the course toward focusing solely on a new building, and not an addition or renovation of the existing library.

As I mentioned before, we engaged a diverse group of individuals from the community in a series of what we call workshops, where we discuss and prioritize things like style, functionality, programming, location, sustainability, and so on. The biggest influence the community group had in those workshops were on topics like whether to renovate, add on, build new, what to do with the space that’s left over, and the spirit of the place.

We went through a couple years of exploring different iterations. We started with the idea of renovating the existing library, with the thought of, if we could make a few tweaks, it would be less expensive. But the existing library is so cut up. There are so many little spaces and columns in the way, that it really reduced the flexibility. It had been added onto over the course of 80 years, so it grew in bits and pieces. From a financial standpoint, it was decided we had to build new. There was a lot of discussion about preserving the older part of the existing building, but it was an issue of economics. The library has to raise more than 70-percent of the project cost, so it has to go the most economical route. The new building will be about the same square footage – only slightly bigger – but it will be much more efficient.

Efficiency in how the spaces are able to be utilized, and how they flow together. But we could also talk about efficiency from an energy standpoint, correct?

Absolutely. One of the latest aspects of the design that we worked on was energy modeling. We analyzed how to maximize natural light, and how to insulate properly to reduce electricity. We do have a lot of glass, but half of it is backed by insulated walls, the glass is just the finish. The average EUI (Editor’s Note: EUI, or Energy Use Intensity, measures a building’s energy use as a function of its size or other characteristics) of libraries of a similar size in this climate is around 150, and we think we can get this to 34. If the budget will allow, there is a realistic path to this being a net zero building.

We haven’t talked about the library green, which will be a fairly simple green space between the new library and the town, but from a sustainability aspect, it should be noted that we’re incorporating a wetland garden to collect all of the rainwater. The new building’s runoff will be recycled instead of going to the city’s storm drainage. 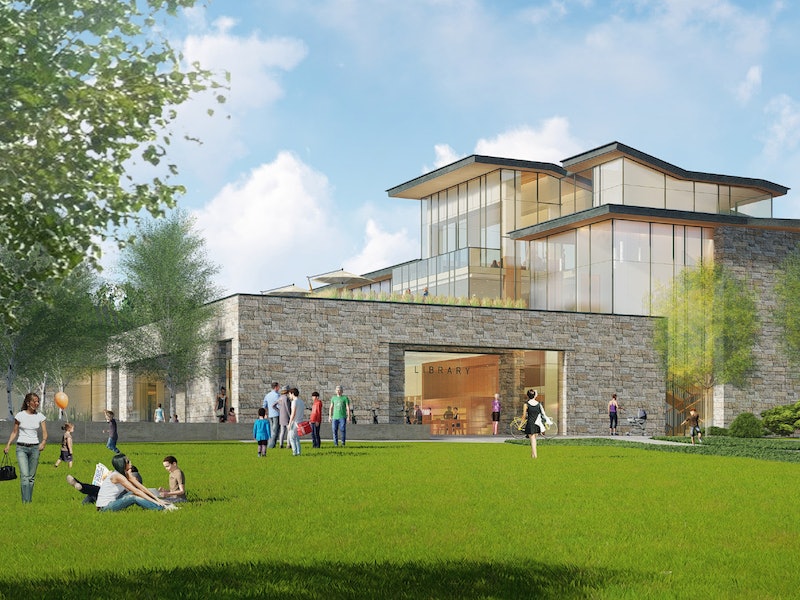 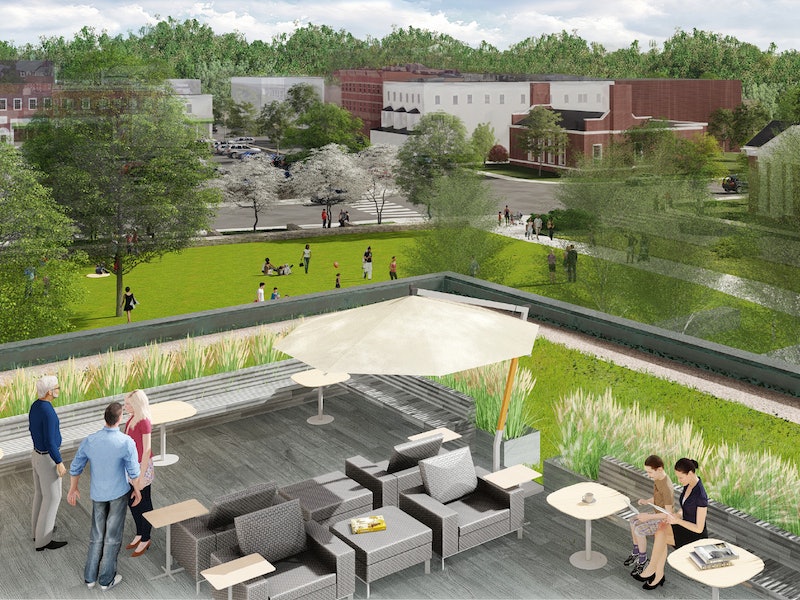 You mentioned the library green, and there are other outdoor spaces incorporated within the design of the library as well.

The outdoor spaces area are important pieces of the project. The children’s area has its own garden, small and protected behind its own wall. There’s the patio at the back entrance overlooking the park. It’s a place to put up an event tent, but will also be intimate enough for smaller gatherings. And there’s the rooftop terrace which is off of the adult area upstairs. The large conference room and teaching space opens onto that outdoor terrace which looks out into the town and the park. It will be a great place to kick back with a book or a laptop during the day, or have a cocktail party at night.

There are so many angles of this project to discuss that we could spend all day talking about it, but I’ll give you a chance to wrap it up with some closing thoughts.

There are a lot of influences in library design, but the bottom line is, libraries should cater to what their patrons want. How will it serve as a community center for this town. I will always remember a library outside of Toronto that has a tattoo parlor because that’s what the community wanted. So the programming aspect is important, but I think the biggest thing to consider is empathy for people. Libraries are heavily used public spaces. So we looked at how to give people comfortable places to sit, provide private and safe spaces, and accommodate both introverts and extroverts. 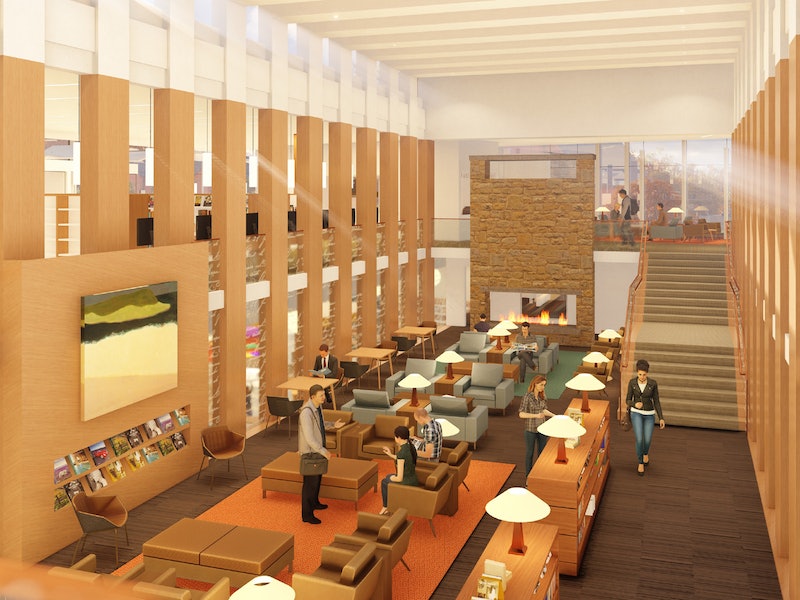