Reflections on a Whole New School

Centerbrook has designed and overseen the construction of a new academic and science wing for the University School, a renowned independent school for boys located in Hunting Valley, Ohio. Gently curving away from the school’s main academic and administration building and down the center of a peninsula in a nearby lake, the rectangular structure’s windowed south wall harvests both natural light and solar heat. The three-story, 52,000-square-foot building is slated for either LEED Silver or Gold and is now open for the current school year.

In addition to its Upper School facilities at Hunting Valley for grades 9 through 12, University School maintains a second campus for K-8 in Shaker Heights, Ohio. Centerbrook Partner Mark Simon, FAIA, who led a design team with Project Manager Russell Learned and Associate Katie Roden, both AIA, discussed the project with me recently. 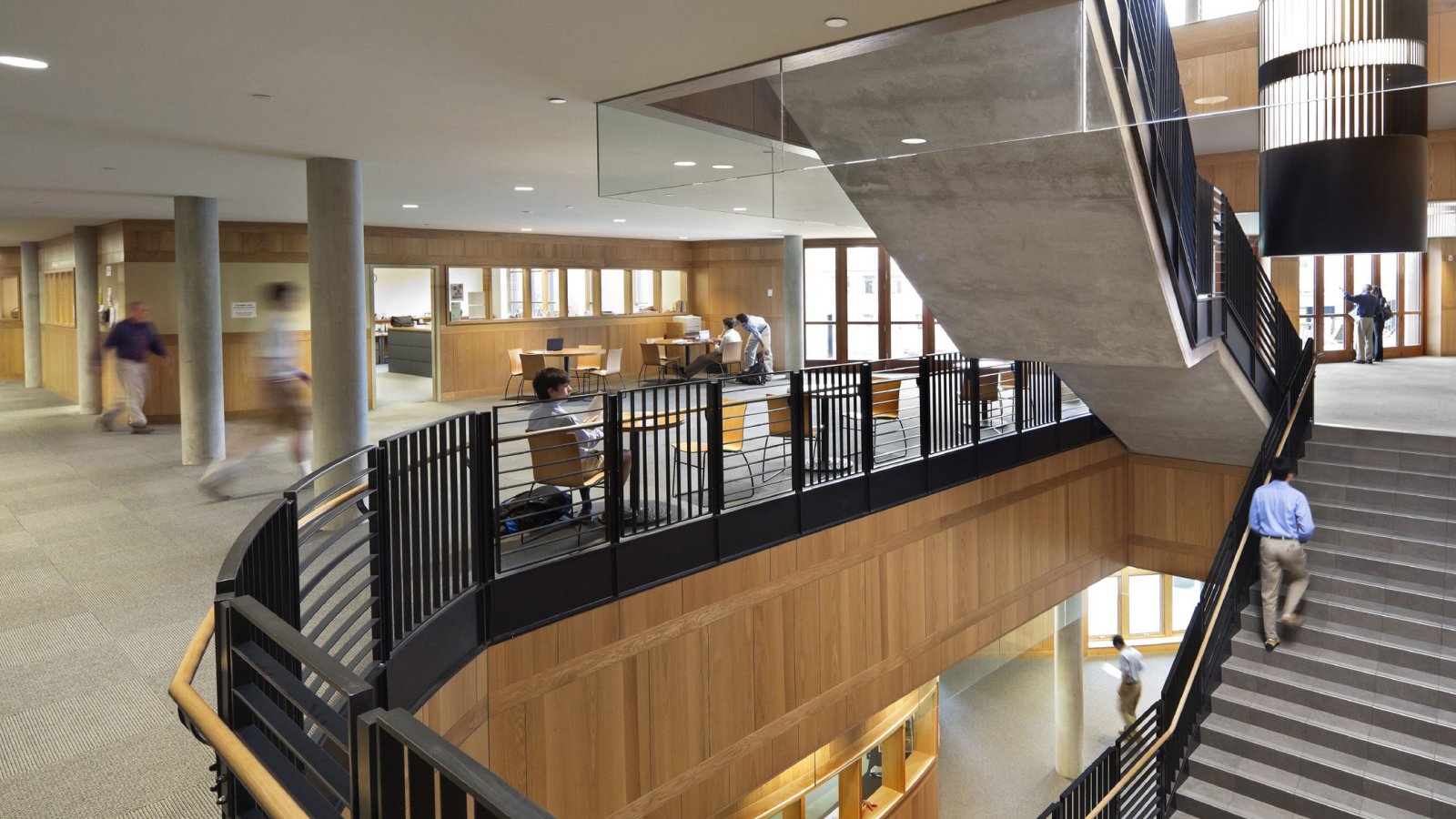 University is an all-male school: Is the design of the building and its more than two dozen classrooms and labs, tailored to how boys learn differently from girls?

Absolutely, from the beginning of our work the faculty impressed upon us their research into how boys learn. That has shown them that boys do learn differently than girls. They have shorter attention spans and often need to learn by doing, by using their hands, by moving about. So the classrooms had to be especially flexible, to allow, if not promote, a variety of activity within a single class session – discussion, lecture, hands-on activity, multimedia presentations, and so on.

Were there other ways you built for boys?

There were. The school has a long tradition of craft-making, of students making things with their hands. So the building uses materials that show how the various pieces fit together and how they contribute to function. For instances, you see the craft of the constructors in the copper siding and downspouts, in the interior wood paneling, and in the metal railings insides and out. These visible elements make the building an education in itself. Incidentally, the builders loved this approach, even though it presented challenges, because it so clearly exhibited their craftsmanship.

Can you give other examples of how the building design reflects the predilections of its users?

We observed in our early visits to US that there was a lot of after-class educational activity between students and students, and students and teachers. This suggested that we needed to support learning outside the classrooms. We designed the building to be organized by subject matter, centered by faculty offices, but with hallways that opened and narrowed to create small “piazzas” where discussions can continue after class and tutoring is welcome at café tables. The hallways are lined with bulletin boards and marker boards to support that as well.

Also, because the school has a steady stream of prospective students and families, we realized that the building was an important instrument to explain how the learning works at US. We’ve put windows with wooden blinders into each classroom – that allows people to peek in on classes without disturbing them.

There is an outdoor classroom, what does that look like and how does it function?

University school has long prided itself on its outdoor programs for the boys, and its use of its rural campus. They have a maple sugar house, a saw mill, and even a fish hatchery below the dam that creates Lake Kilroy, which these facilities abut. While they have long used the lake for sampling biota, we were eager to get them even more engaged with it; so we and our landscape architects, Stephen Stimson Associates, suggested an outdoor lakeside classroom to enhance their interaction with it and the world around them.

How are these classrooms different than ones that were common just five or ten years ago?

US had grown substantially since the Hunting Valley building was constructed in the 1960s. Old, open spaces, such as their original library, had been filled in with halls and rooms. Many of the classrooms were windowless interior spaces and much too tight for the active students who occupied them. We also believe that the lack of daylight has a deleterious effect on learning and concentration. All the new classrooms are “right-sized” to allow for discussion tables instead of the older rows of chairs. They are all now on outside walls with plentiful daylight. We’ve heard from the community that they now have a “whole new school.”

What types of technology were included in the various learning spaces?

We have made sure that the rooms have good acoustics for starters. One wall in each classroom is covered, floor to ceiling, with white board that is also used as a projection screen for a “short-throw smart projector.” This projector turns the whole wall into a smart board, or theater screen, as needed; directly opposite is wall-to-wall tack board that aids acoustics while it also allows teachers to customize their classrooms with visual material.

How important to learning today is the arrangement or grouping of various educational spaces?

We’ve learned over the years working on more than 30 projects that each school has its own pedagogy and organization. Sometimes they are similar and sometimes they are vastly different. They also change over time. At US they organize by subject matter with a common faculty department office near the classrooms so that the faculty can mentor each other and hone their teaching.

The building has an internal mission and an external one, as well: how does it interact with its neighbors and the campus as a whole?

The building addition uses a finger of land that extends out into Lake Kilroy so that it enjoys spectacular views in every direction. Fortunately, this allowed us to run the long finger of the building East to West, to harvest daylight and the solar warmth.

What were the primary approaches employed to seek LEED Silver certification?

The building orientation as noted above was our first key strategy. Its long, narrow plan increases daylight to all parts of the building so that we can minimize electric lighting. People can now see outside, which we know from many studies enhances learning.

We insulated the building very well and constructed it from concrete to enjoy the thermal momentum that offers. All the classrooms have open ceilings in places to allow the air to interact with the concrete floor above, exchanging thermal energy and keeping the swings of indoor temperature to a minimum. In addition, “indicator lights” alert faculty to the times when the operable windows can be opened for ventilation. All of this lessens the demand on the heating and cooling systems.

In that regard, the building uses the pond in an exciting way. We installed a “pond-loop” geothermal system – essentially a stainless steel radiator that transfers the pond's moderating temperatures, year-round, to heat exchangers inside the building for both heating and cooling. It greatly reduces the need, if any, for fossil fuel energy.

We have worked hard to capture rainwater and reabsorb it locally into the ground to avoid storm water systems that can cause flooding and erosion. Stephen Stimson Associates designed bog-gardens and we’ve used permeable materials around the building.

We’ve used recycled and recyclable materials throughout the building. Trees that were taken down for construction were harvested and used for wood paneling and furniture in the school, serving as a visual lesson for the students. Construction debris was recycled. In phase two of this project we will be reusing many of the abandoned spaces for new purposes.

Is the client happy with the result?

I received a wonderfully gracious email from Stephen Murray, Headmaster of University School. He wrote, “People are absolutely blown away by the building – they just cannot get over it. It has been so much fun giving tours lately – their jaws just drop. In the words of one very excited colleague: ‘This is a whole new school!’”