Few topics have recently trended higher in the athletic facility management world than synthetic turf, as both player safety and durability have been called into question. With two different playing fields featured in one of our projects, we explored the latest and greatest options. Here’s what we found: 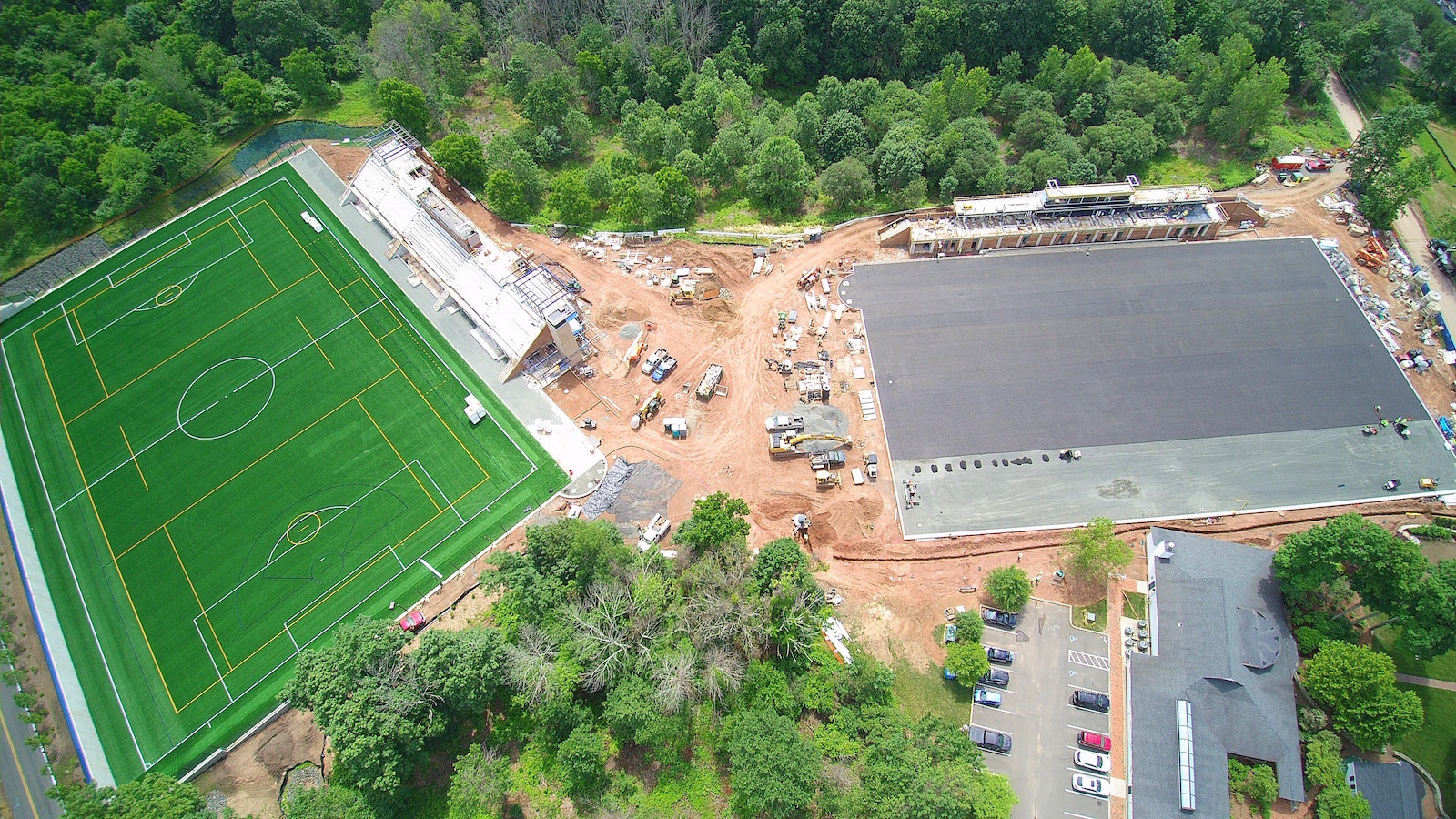 Construction is finishing up at Quinnipiac University for a new athletic complex we designed that features a field hockey facility and a dual-purpose soccer and lacrosse stadium. Both venues have begun hosting competitions.

The first generation of synthetic turf was little more than a carpet (think of a Scotch-Brite pad) laid over a stone base. Then turf made up of longer tufts, spaced further apart, and with sand spread between them was introduced. Today’s state-of-the-art synthetic turf field is a sophisticated system made-up of the synthetic turf itself, which consists of fibers (grass blades) and a backing layer, an infill material which is spread between the fibers, and a shock-pad below the turf. This third generation of turf has the capacity for cleats to release which prevents soft-tissue injuries to knees and ankles, absorbs impact which helps prevent head injuries, and is a more playable surface.

What to Consider: Choosing a playing surface for a field hockey pitch can be pretty straightforward. Ideally these fields are only used for field hockey. For this sport, the gold standard is knitted nylon turf, and only one major manufacturer makes it. Other manufacturers produce polyethylene tufted turfs at a significantly lower cost. Nylon is more durable than polyethylene. As a construction method, knitting is both more durable and provides a more uniform playing surface than tufting.

The Decision: Given the superiority in material and construction, Quinnipiac quickly chose AstroTurf A12, a knitted nylon carpet.

Selecting a playing surface for soccer and lacrosse was a far more complex decision. As you might expect, natural grass turf is the holy grail of athletic surfaces. However, natural turf is expensive to maintain, especially with multiple teams using it for daily practices and games. With this new stadium the home to both the men’s and women’s soccer and lacrosse programs, we looked at synthetic surfaces from the outset.

Given its durability, synthetic turfs make good economic sense, and the turf industry is working hard to match the playability of real grass. Also driving the evolution of turf systems are player safety and environmental concerns. This segment of the synthetic turf industry is currently in a period of rapid change and advancement.

What to Consider – Type of Fiber: A primary decision for the turf system is the type of fiber. Fibers come in two forms: extruded monofilament fiber, which is like a strand of string; or slit-film, which is manufactured in sheets and cut into strips. Slit-film looks more like natural grass, and it holds the infill material in place better. Monofilament turf provides much better interaction between the field, athlete and ball.

The Decision: The key consideration for Quinnipiac was the playability of the soccer ball, so a monofilament turf was chosen. 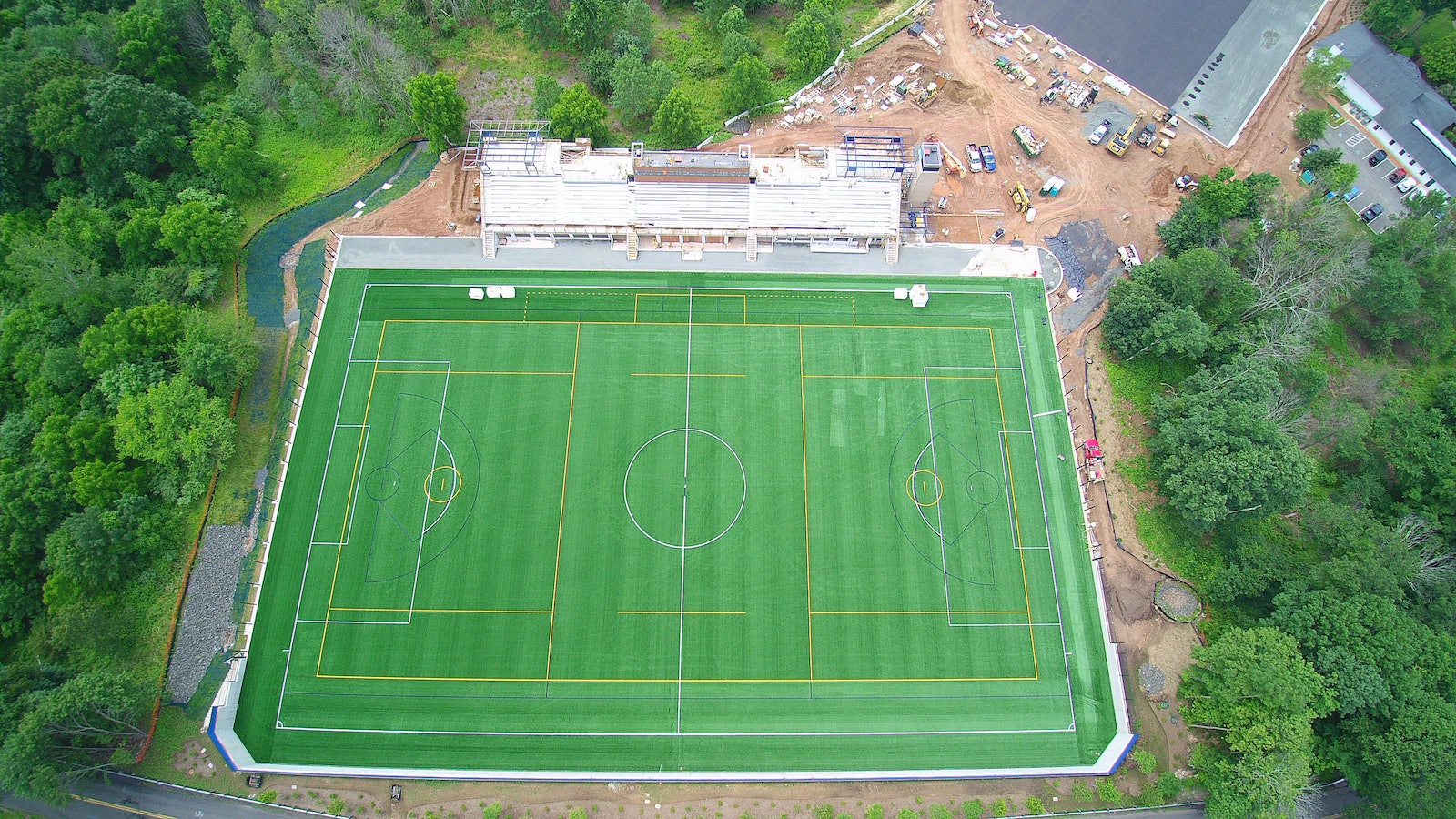 What to Consider: Infill materials are varied, and have become a flash-point for controversy. Infill is typically a material that has been ground up into small particles and is spread between the fibers of the turf. It helps the individual fibers to stand up and provides shock attenuation. It can be made from crumb rubber (ground-up tires), EPDM or TPE roofing, or from organic materials like cork and coconut.

Much has been made of an alleged increased health risk associated with crumb rubber use in playing fields and playgrounds, but research has yet to support that assertion. We continue to keep an eye on the progress of the EPA’s action plan as new information is made available.

The Decision: Quinnipiac makes every effort to be environmentally conscious, thus the decision to use organic infill was made very early in the process. To aid the school in deciding the type of organic infill, we had two 60’ x 15’ patches of turf mocked-up, and university staff and athletes were invited to test the surfaces.

What to Consider: Shock pads made up of polypropylene, or rubber, can make a field play better, safer, and last longer. Before shock pads came into use, infill material alone was used to provide shock absorption, or attenuation. In order to be truly safe, a lot of infill material had to be used. This had a large effect on player performance. Think of running in sand; the softer the sand the slower you run, and the sooner you get tired. A shock pad provides additional impact attenuation, which allows the infill material to be better tuned for optimal performance. In addition, a shock pad will protect the backing of the fiber, adding to the life of the turf. A shock pad can add significantly to the cost of the turf system versus a turf system with no pad.

The Decision: The safety of young athletes is a critical concern that – in Quinnipiac’s case – eclipsed cost, and it elected to include a shock pad. 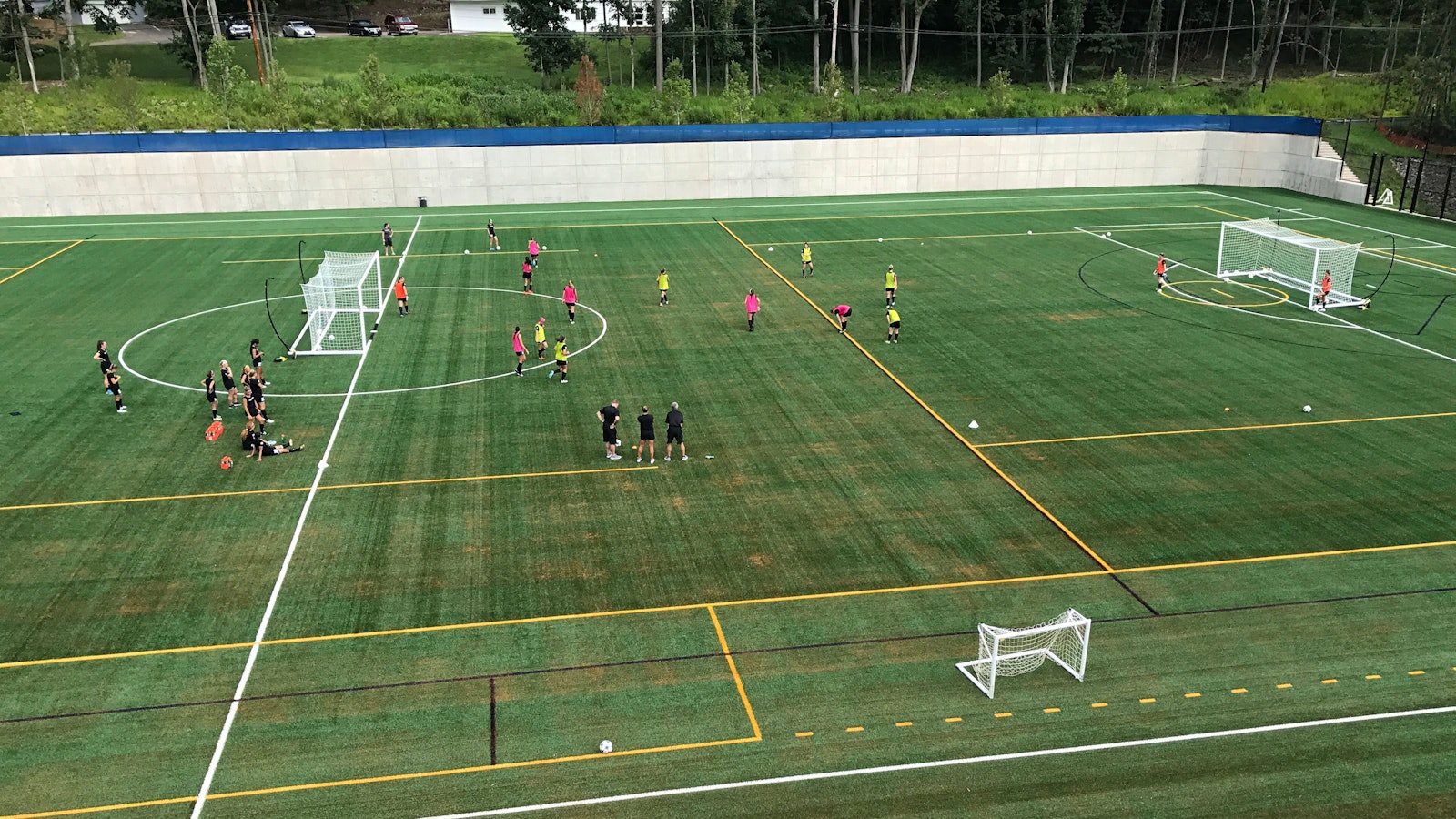 For its new soccer/lacrosse stadium, Quinnipiac chose a FieldTurf Revolution 360 field – the same as Gillette Stadium, home of the New England Patriots and New England Revolution – along with their proprietary organic infill product and a Brock Powerbase YSR 25mm shock pad.

How We Can Help

Keeping up with the latest developments, in any field we work in, is part of the job description of an architect. Whether it’s state-of-the-art advancements in educational pedagogy, laboratory design, or playing fields; it’s how we help our clients make critical decisions about complex issues.

Editor’s Note: Since the publication of this article, the latest study conducted under EPA guidelines also concluded that recycled rubber infill in synthetic turf poses negligible risks to human health. The report also stated that cancer risk levels for users of synthetic turf field were comparable to or lower than those associated with natural soil fields.