March 1st marked the completion of our first “Centerbrook Chair” workshop. It was the culmination of twenty weeks of hard work by six participants: Melissa Kops, Derek Hayn, Anna Shakun, Justin Hedde, Keith Wales, and Peter Majewski. They were mentored throughout by Patrick McCauley, our Master Model Maker and industrial designer, and Bill Rutan, our Facilities Manager and master carpenter. 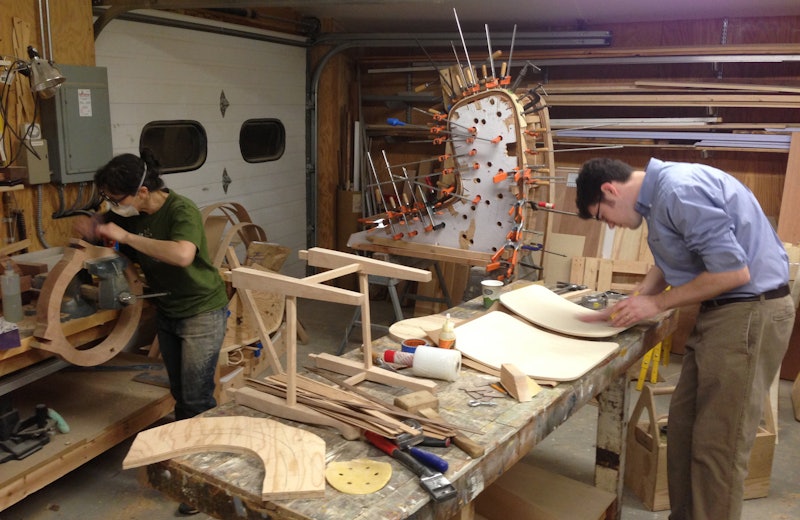 Fabrication in progress in the Wood Shop. 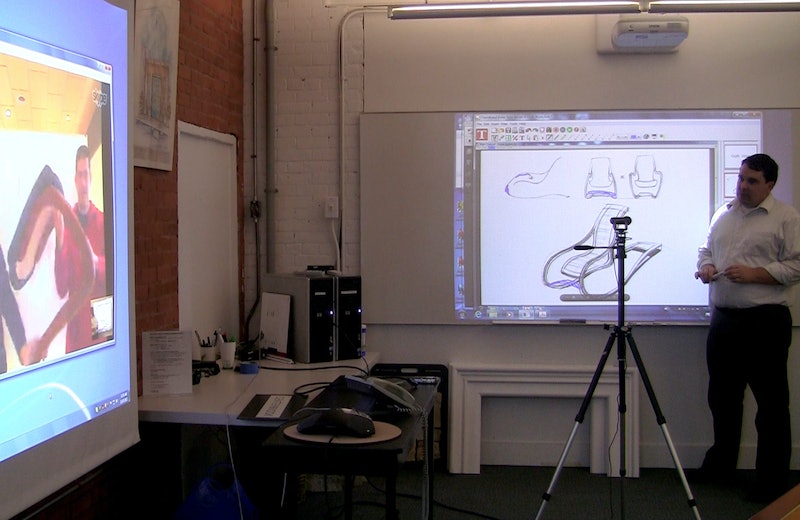 The workshop is a reflection of Centerbrook’s devotion to craft, to a sense of the handmade, to the beauty and humanism with which we endeavor to imbue all of our buildings. It is the first of many more workshops to come, at the rate of two per year. Participation is limited to six architects and staff members who receive hands-on instruction in a variety of building crafts, including woodworking, metal work, ceramics, resins, castings, fabrics, and finishes.

The task is to design and build a chair, which is then judged for sturdiness, comfort, craftsmanship, and beauty by the partners of the firm. It sounds simple enough. After all, a chair is less complicated than a whole building, and many architects famously have designed one, among them Wright, Corbusier, Saarinen, Gehry, Foster, and Mies van der Rohe. It should be noted, however, that after the experience Mies van der Rohe said: “A chair is a very difficult object. A skyscraper is almost easier. That is why Chippendale is famous.”

A chair is, indeed, a demanding taskmaster. It has to be strong, of course, but under the strain of dynamic forces met by relatively slender parts. It also has to be comfortable while being beautiful, and beautiful from all vantage points. The fact that most people have a favorite chair speaks volumes about the breed. Year after year, new designs for chairs appear, as if we are not quite satisfied with the harvest from the generation before.

Chairs also have an interesting history. Up until about 400 years ago when they became commonly used, chairs were made almost exclusively for nobility and prelates. The word “chair” still denotes hierarchy today. In medieval times, the lord of the castle sat in the only chair in the Great Hall and oversaw the rest of his guests who sat side by side on benches with a long board laid across their knees as the table, from whence comes the term “Chairman of the Board.” 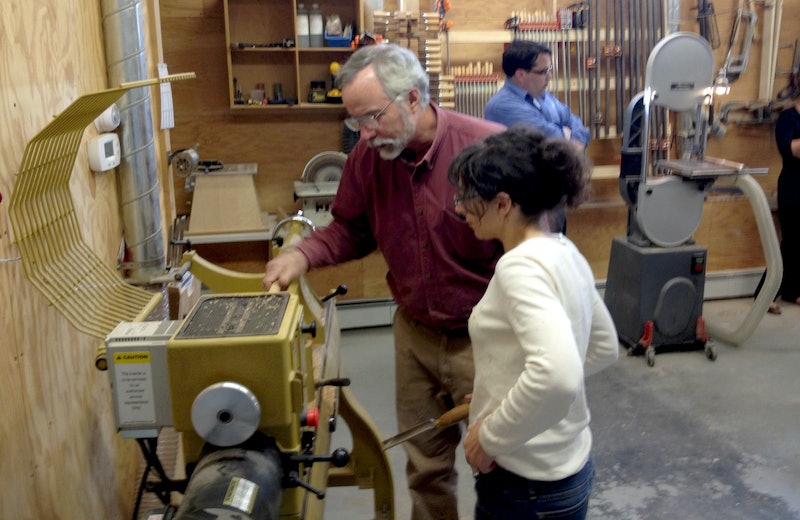 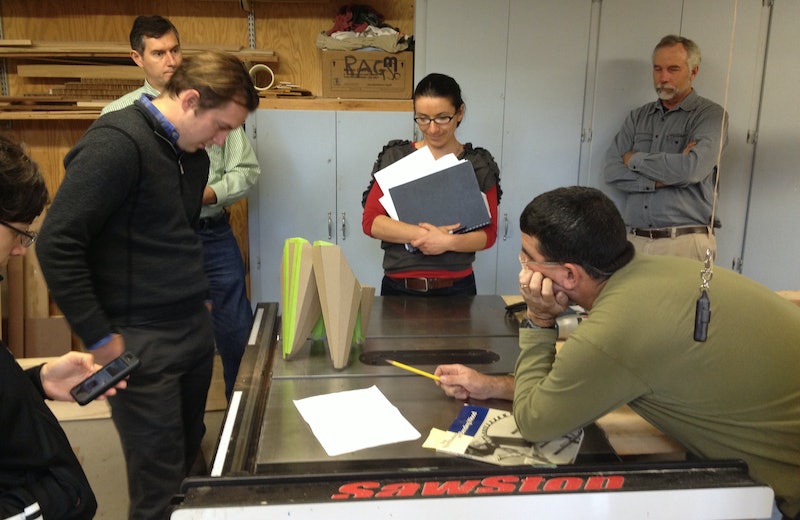 Each participant in the workshop is encouraged to incorporate as many features as possible in his or her design, such as bent shapes, carvings and engravings, laminations, veneers, mortise and tenon joinery, glues and screws, fabrics and weavings, and fine finishes of paint, varnish, shellac, oil, or wax. After initially being sketched by hand, the final design is drawn in Revit, the 3D modeling software. The workshop instruction runs the gamut from choosing which power or hand tools to use and how to operate them skillfully and safely, to the nature and choice of materials and detailing options. At the first session, Bill made sure everyone knew where the first aid kit was. He assured them, clairvoyantly, “There will be blood.”

Each winner of the “Centerbrook Chair” will have her or his chair hung prominently on a wall of the office, Shaker style, for posterity. This term’s winner is Melissa Kops. The other chairs, all of which were spectacular, will be used in the reception and lounge areas of the office.

The participants and instructors share their experiences and insights below, along with a photograph and sketch of their chairs. These are all really good designs, well done! 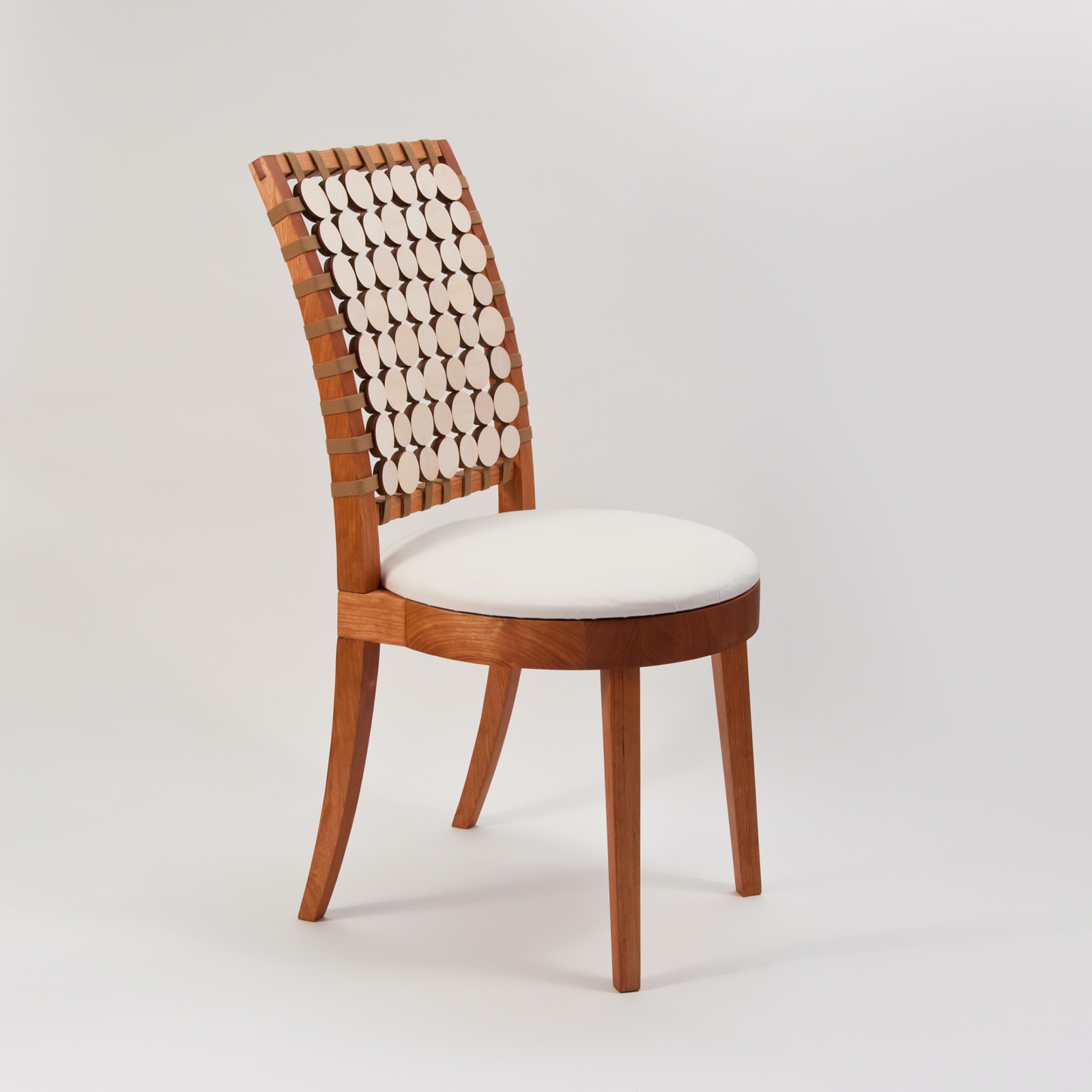 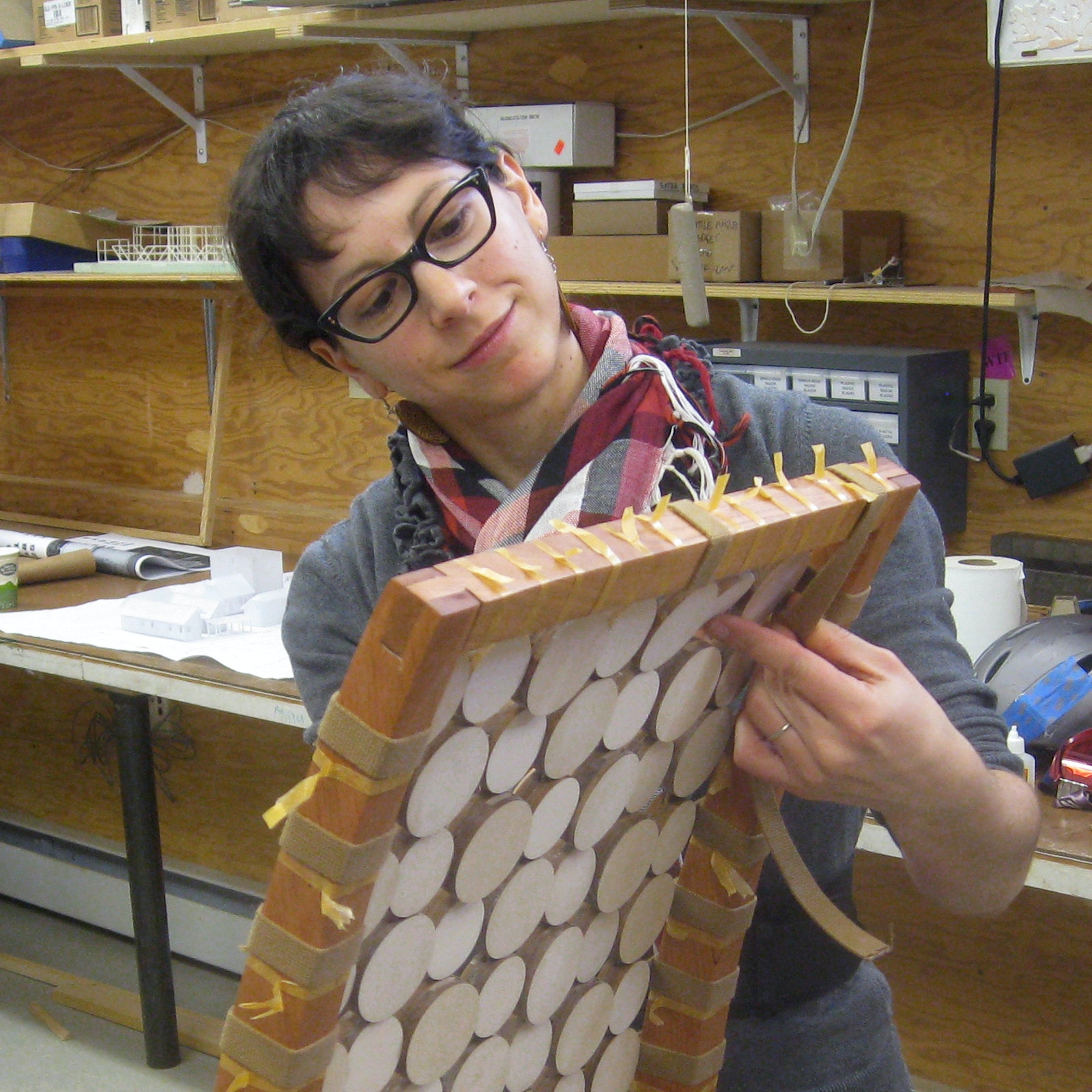 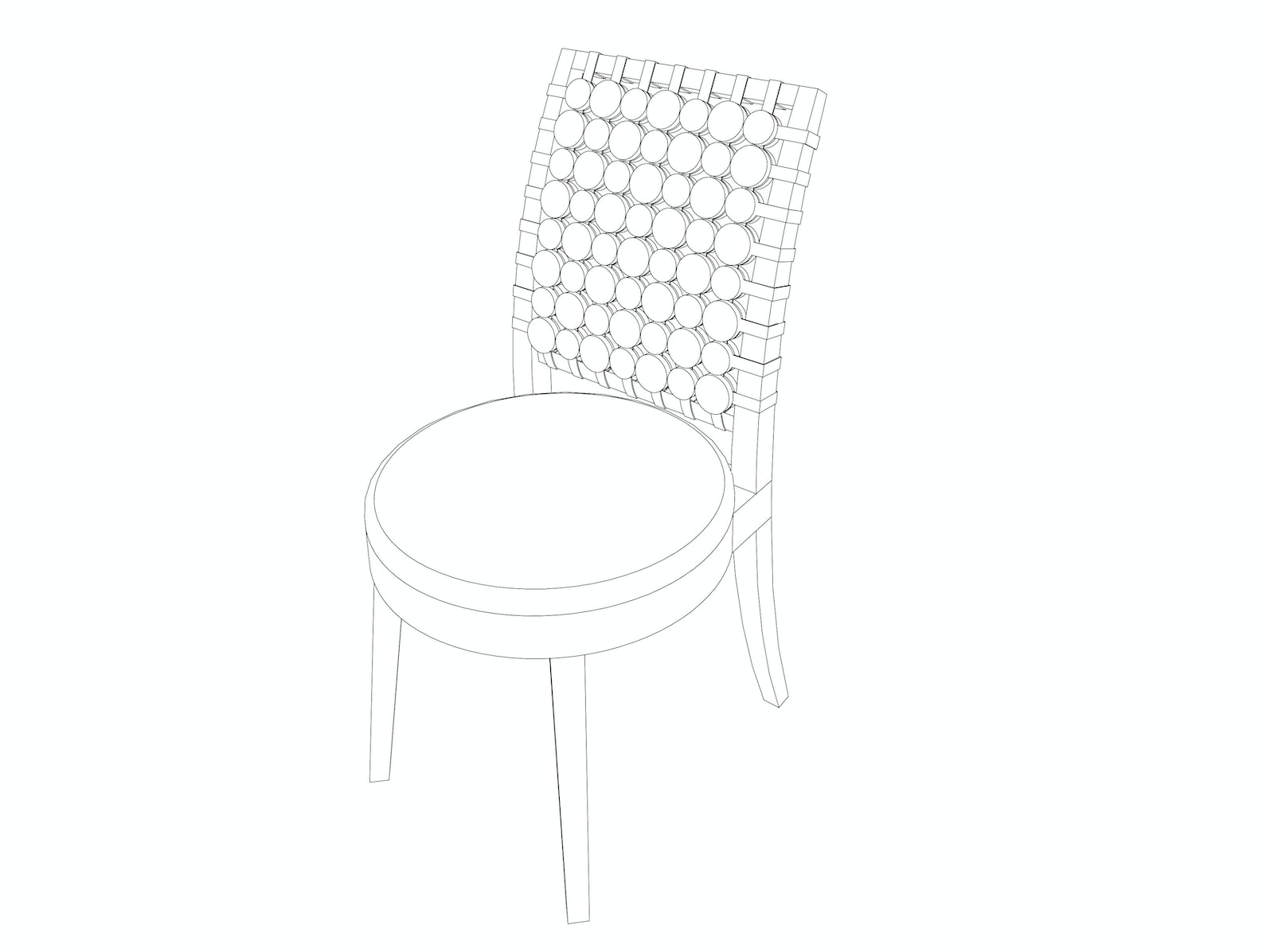 “Since I had very little experience with woodworking, my design concept was to build a simple chair with something special. I conceived of a flexible disc back that I like to think of as “chair jewelry” with a function. It serves as decoration and provides lumbar support and comfort. As I developed the design, the other parts of the chair became more complex in response to the original concept. For instance, I changed the seat from rectangular to round. Attaching legs to a round seat is less straightforward, and as a woodworking newbie, I came up with a solution that made sense to me and, I think, is rather original. I ended up hand-working the wood more than I expected, using dovetail saws, chisels, files, hand planes, and sandpaper. Patrick and Bill were incredibly instructive, and my husband, Dan Kops, a furniture maker himself, gave me a few tips. I also learned through trial and error: for example, on my mock-up chair, I sawed by hand the angled-tenons of the front legs, but after being dissatisfied with the inaccuracy of this method, I developed my own approach to creating them using the table saw, a sled, and two blocks and clamps that held the piece at the correct angle. They turned out great. I was surprised and delighted when my chair came together, hours before the judging, thanks in large part to the selfless assistance of Patrick McCauley. The final product exceeded my expectations.” 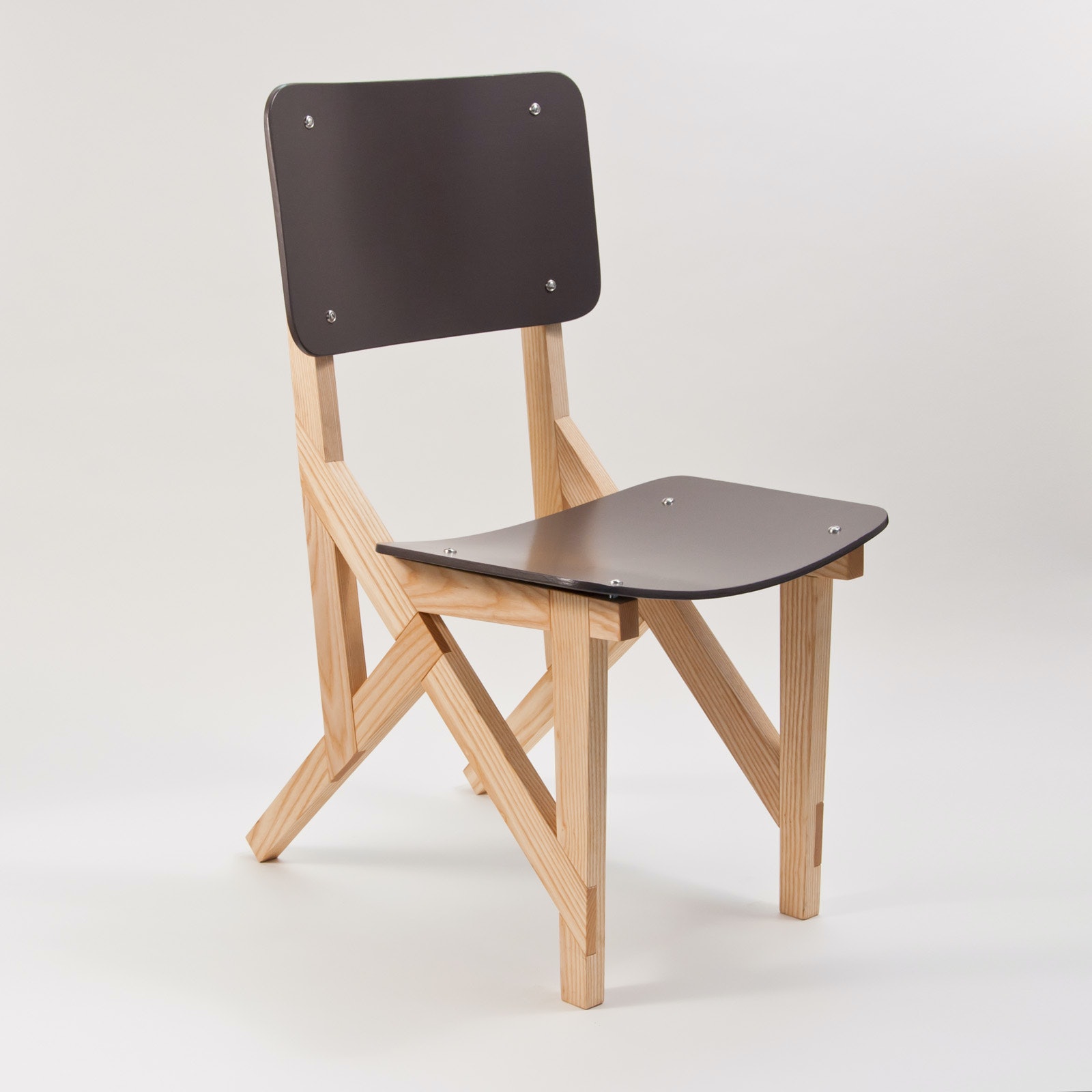 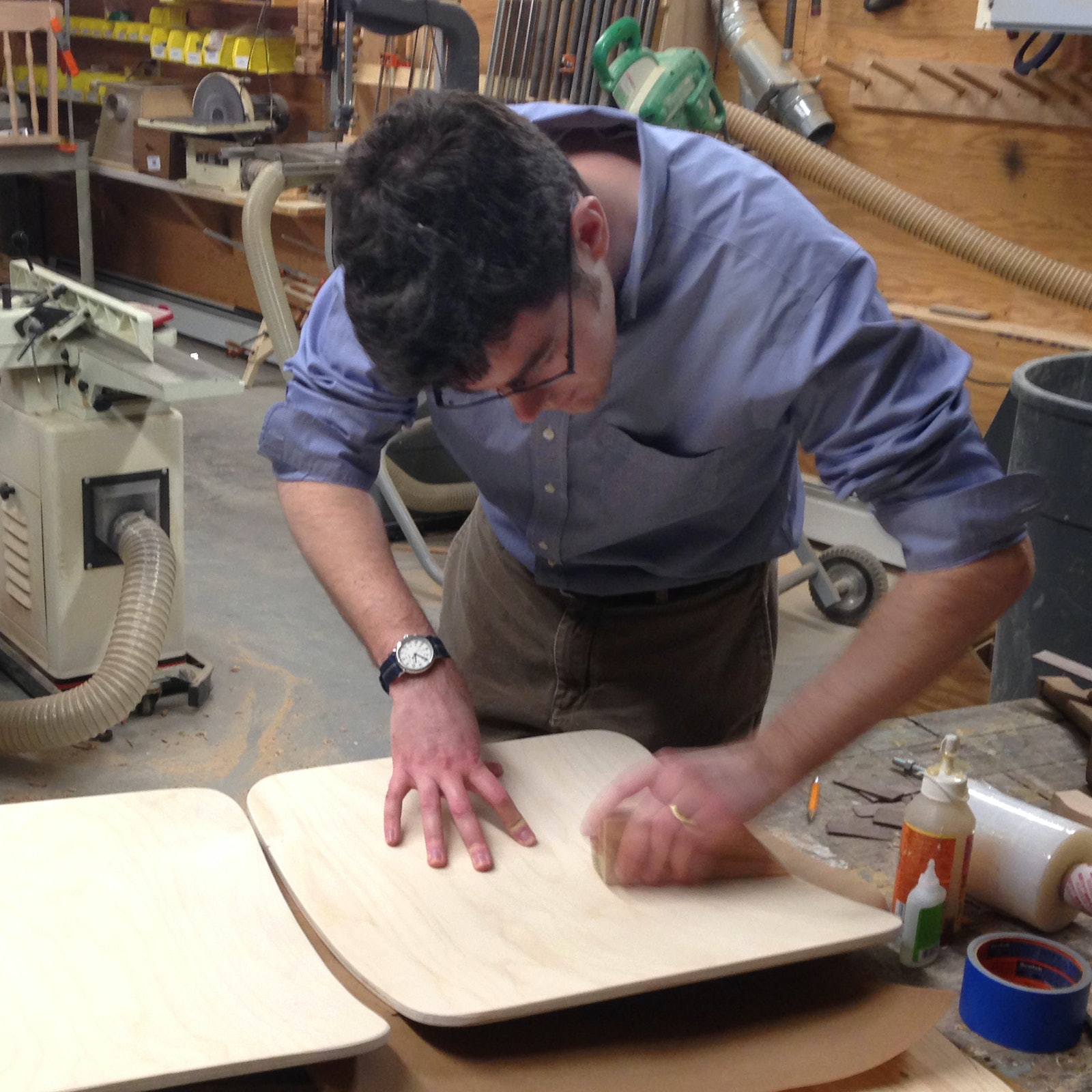 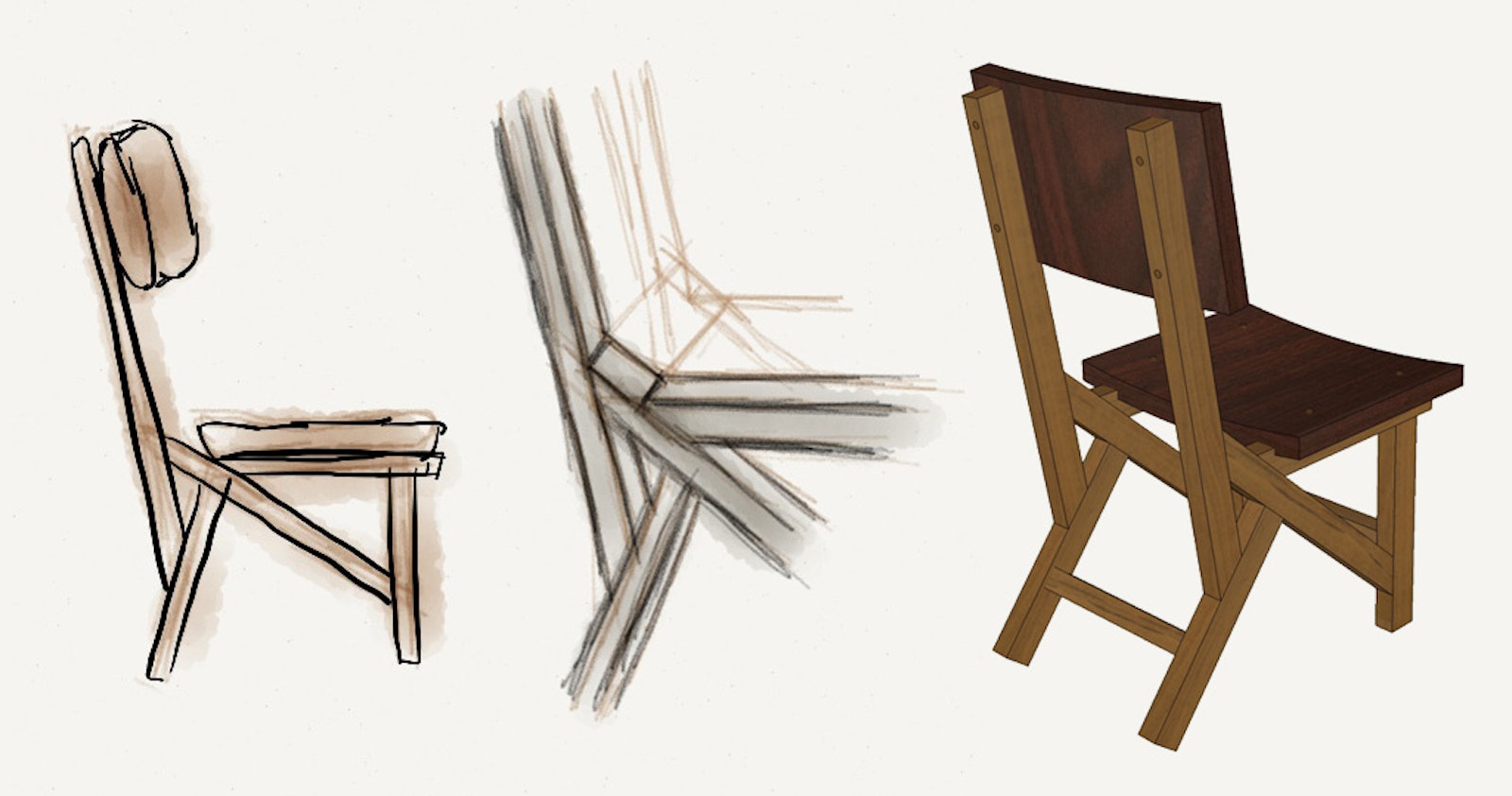 “From the start I knew I wanted straight lines and sharp angles paired with a gently curved seat and back. The resulting chair is sort of reminiscent of an old schoolhouse chair with a modern, impossibly interconnected frame.

This chair consumed my life for the last month. I spent about half of that time just staring at it, plotting each move. As a graphic designer who believes every element has its place on the page, it was inconceivable for me not to take that approach with this chair. Graphic designers don’t get to build models in school (we just inhale a bit too much spray mount), so working with two great craftsmen was a real treat. I think that while they appreciated my methodical and somewhat obsessive approach, I may have drove Patrick and Bill a bit nuts.” 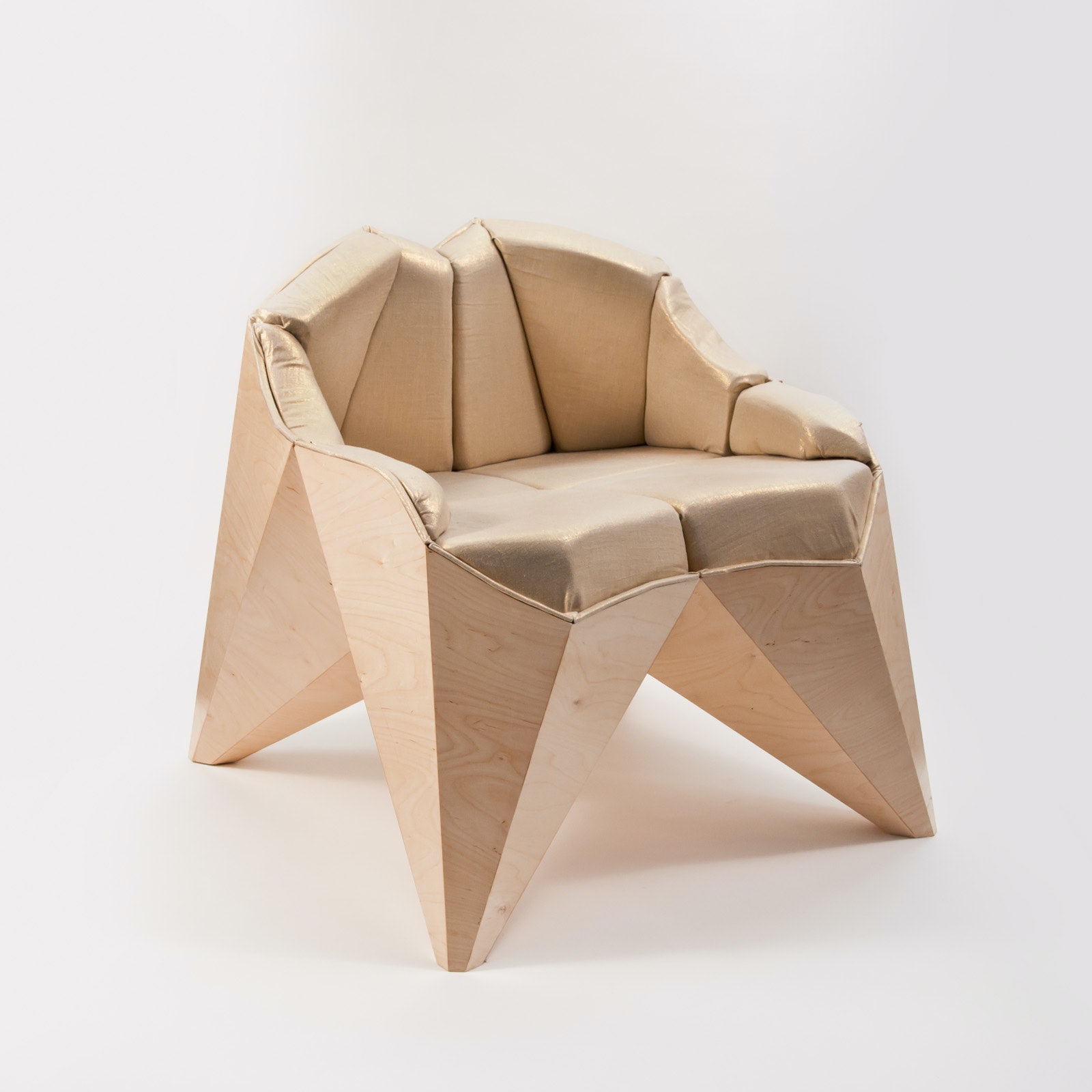 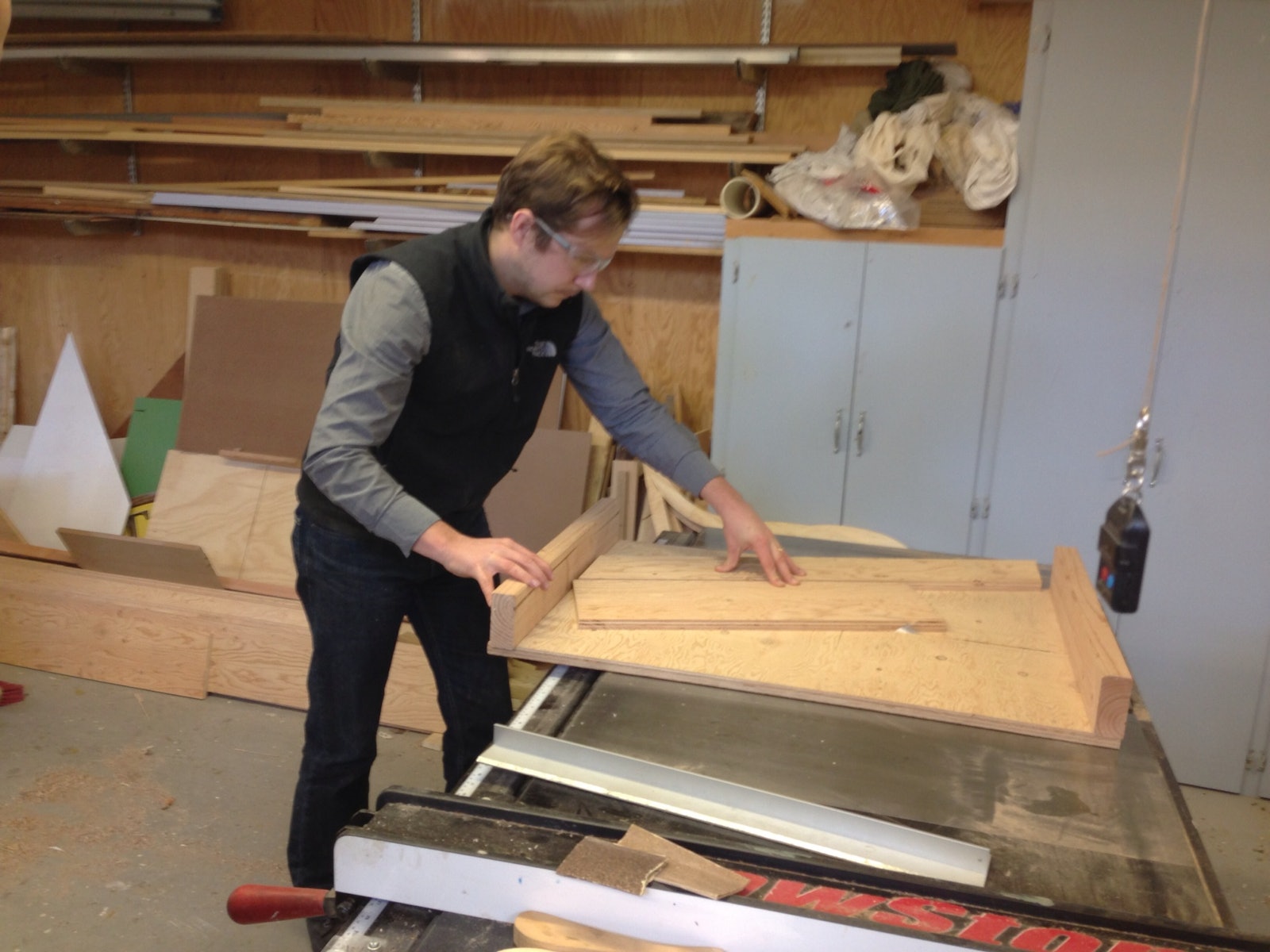 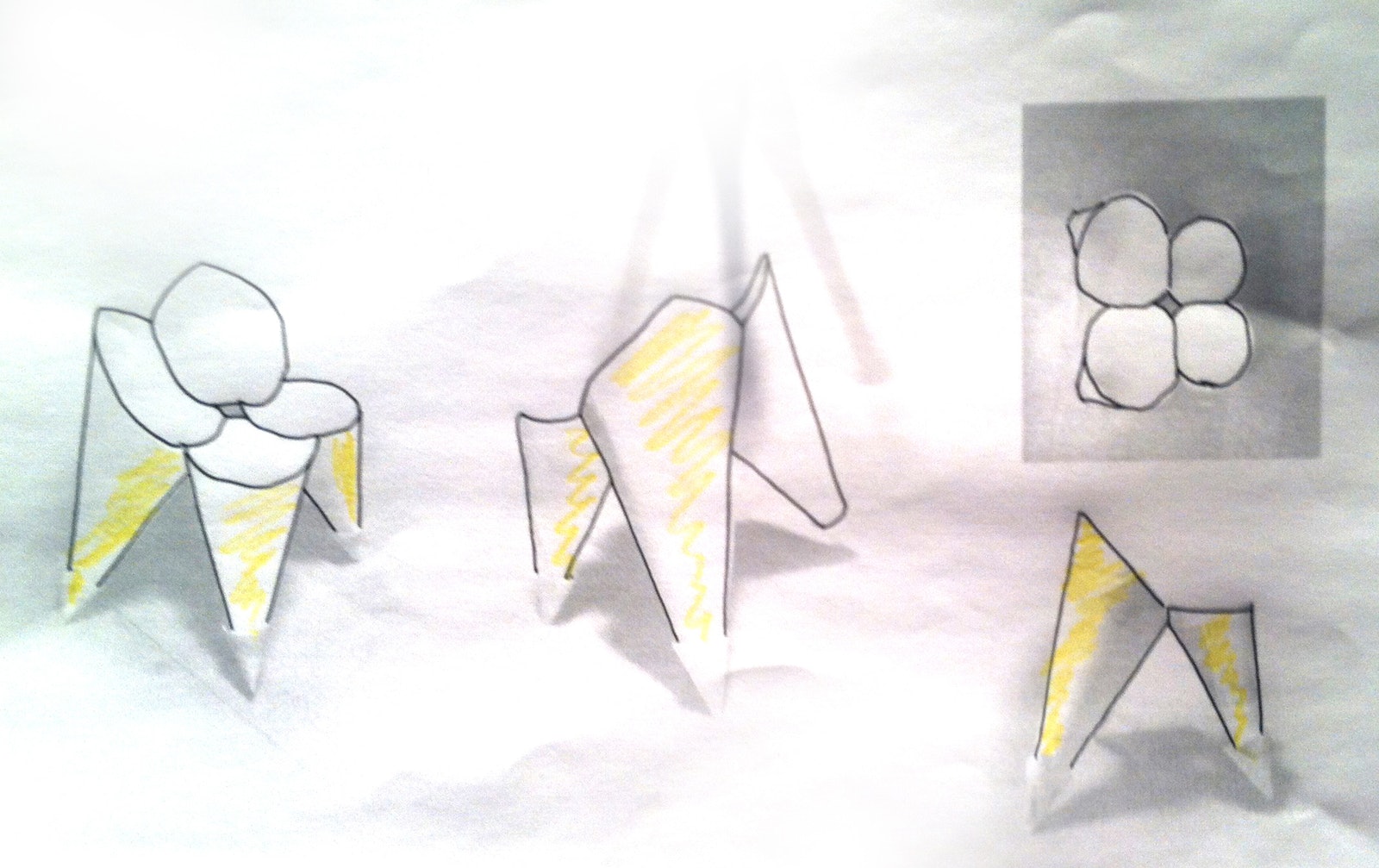 “When the iconic Eames Lounge Chair was created, Bernice “Ray” Eames remarked in a letter to husband Charles that the chair looked “comfortable and un-designy.” He responded that his vision for the chair was the “warm, receptive look of a well-used first baseman’s mitt.” My chair was inspired by this vision of inviting functionality. The volumetric shell structure, made of four plywood heptagonal cones, projects a sense of stability and weight. These qualities represent a chair’s most fundamental function – the ability to hold you up! A layer of upholstered linen covers the interior of the shell and provides a welcoming counterpoint to the rigidity of the structural form.” 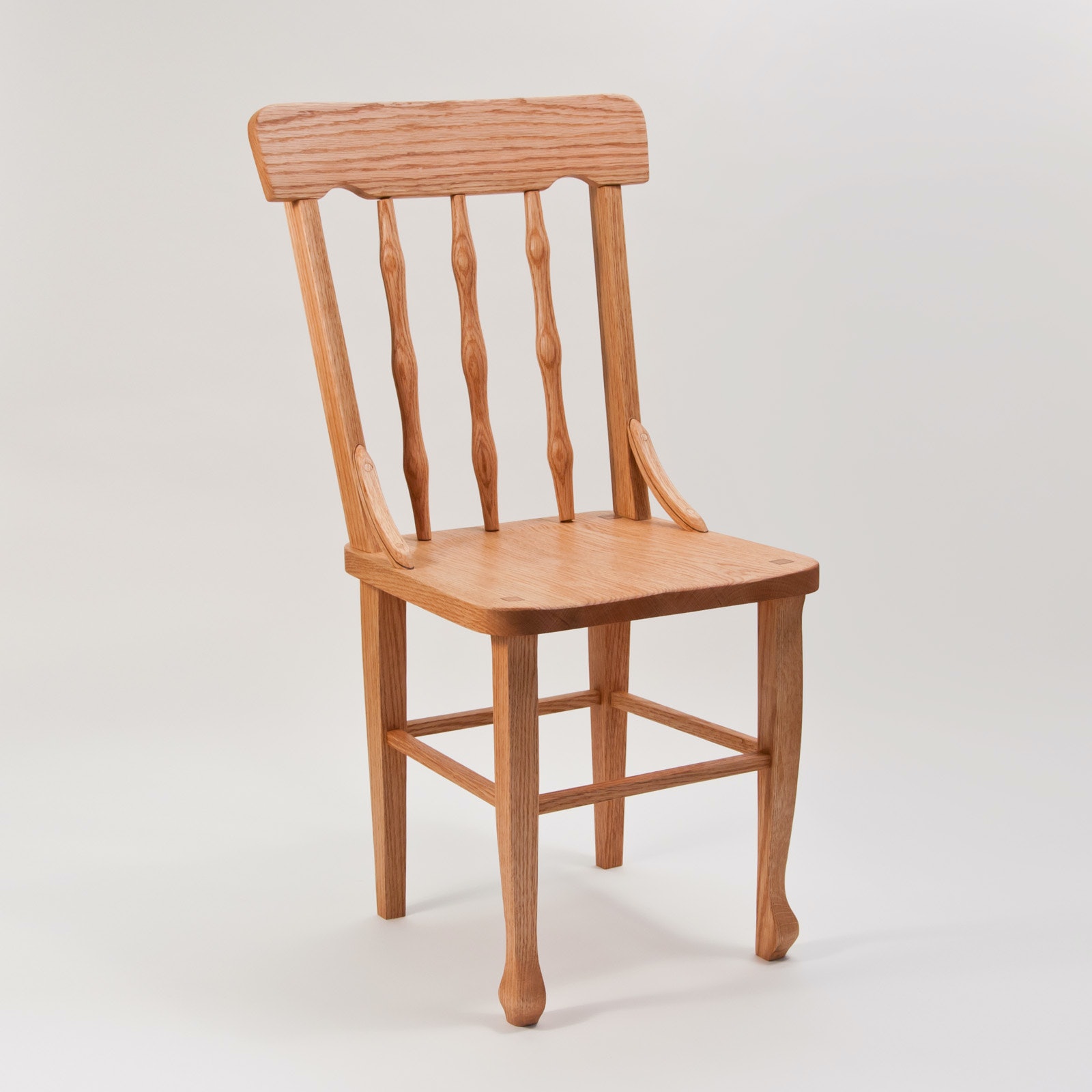 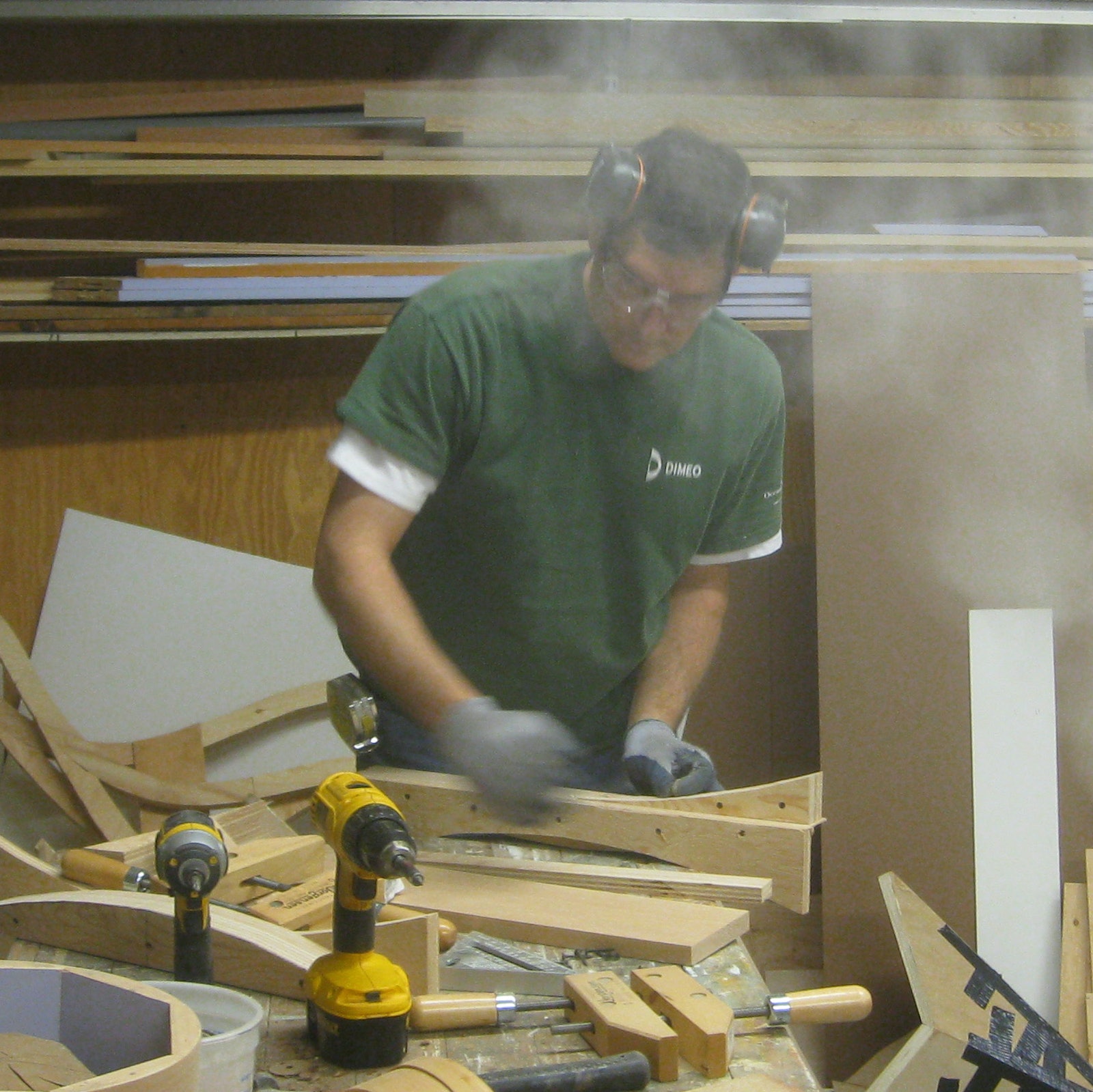 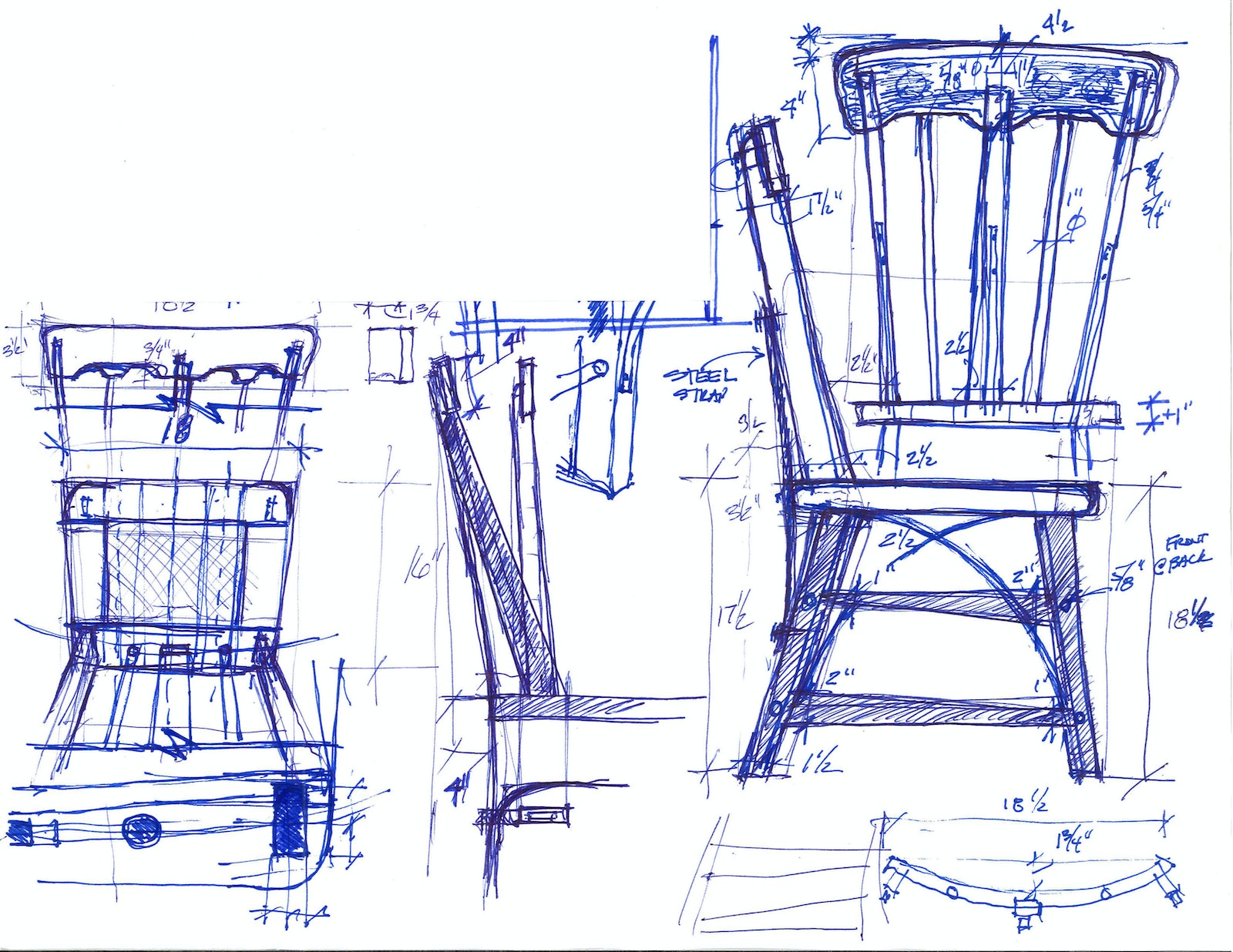 “For me the making of the Centerbrook chair involved a close relationship with the wood. My wood of choice happened to be oak, which was felled and milled on my property a few years back. I worked to understand its grain, so that the final shapes could express the true structure of the wood. This involved cutting the patterns out of certain parts of the milled planks and planing them down to express the grain. Once a smooth surface was achieved, I focused on the flow of the grain lines so that the various shapes of the seat, the back, and the legs are in concert with each other, flowing through the chair from top to bottom.” 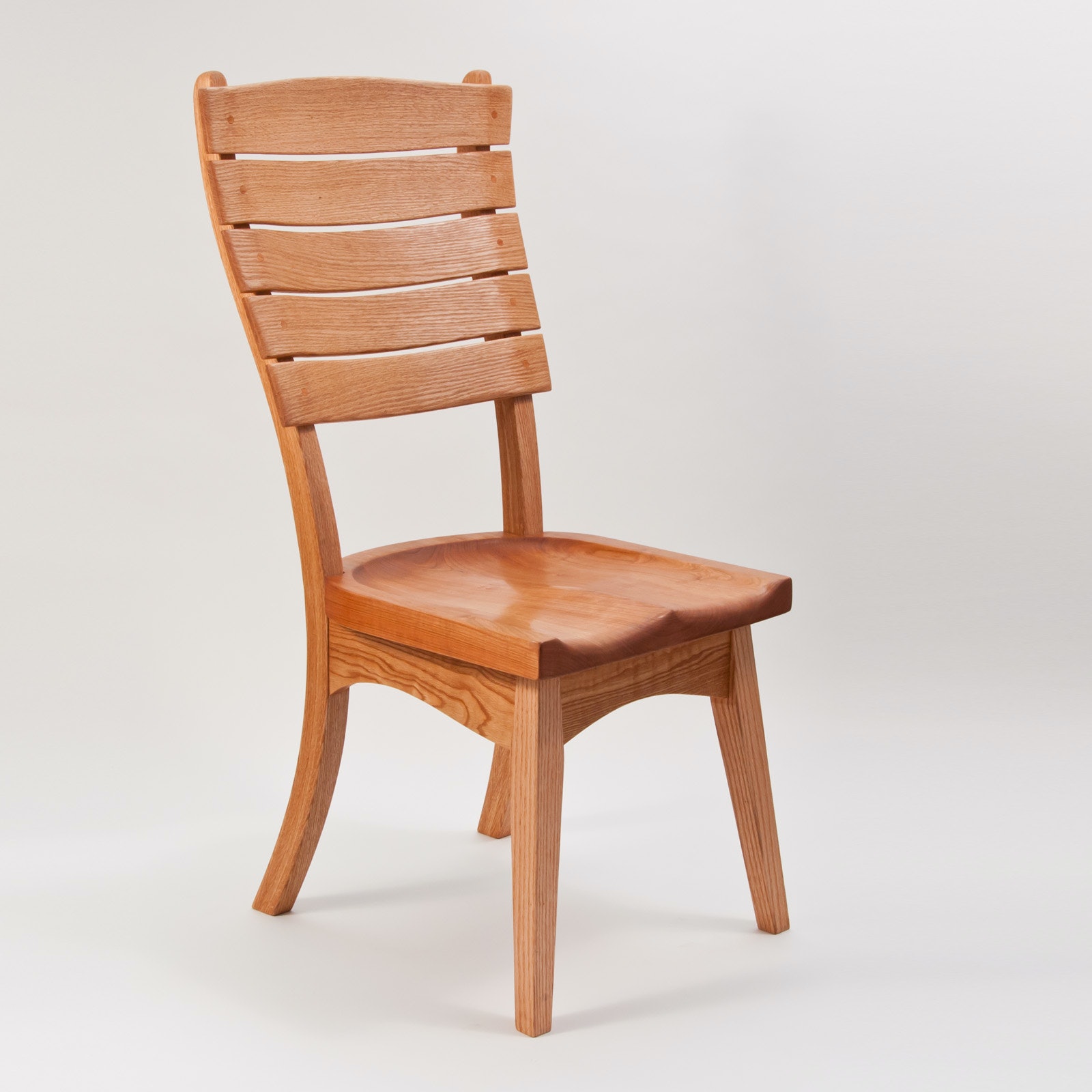 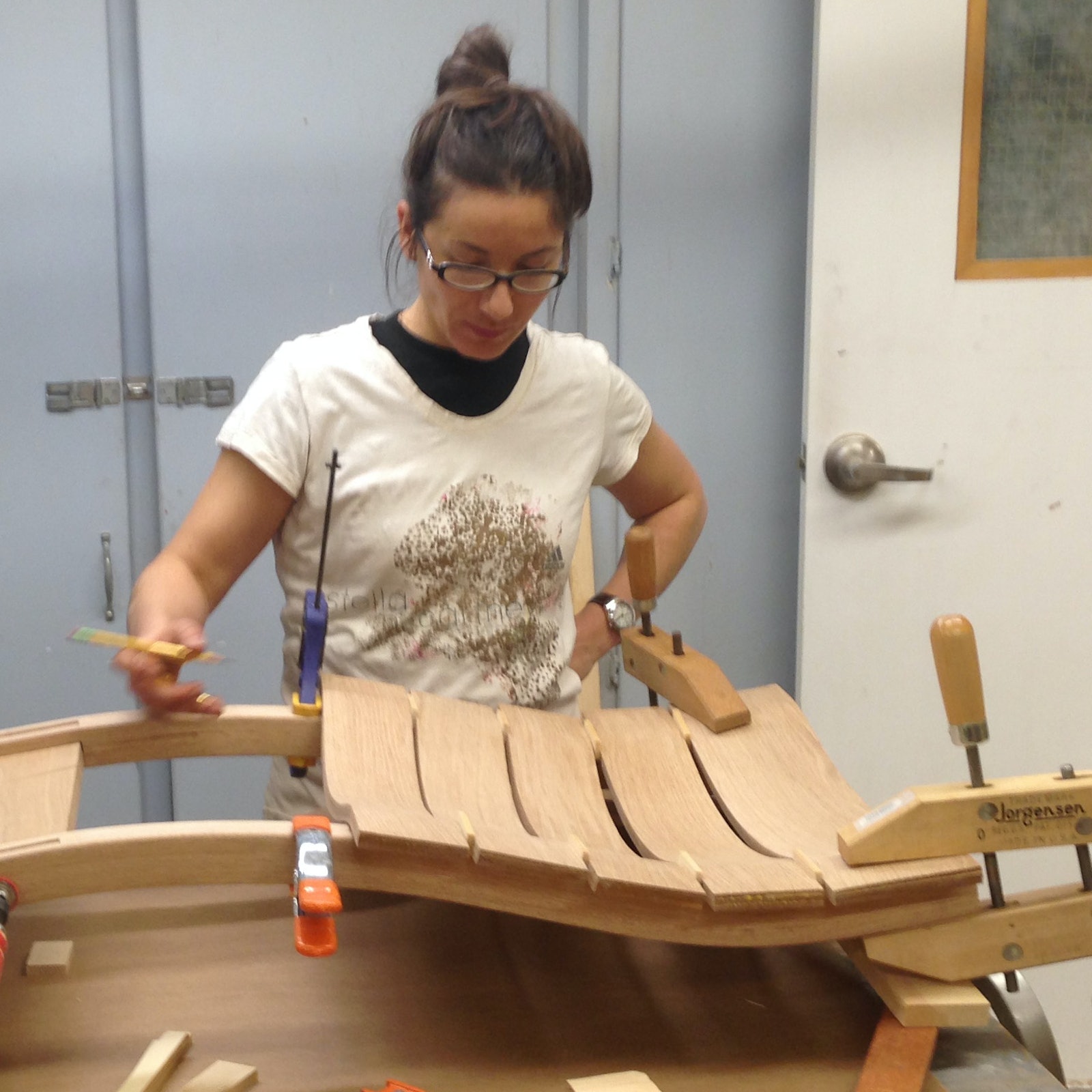 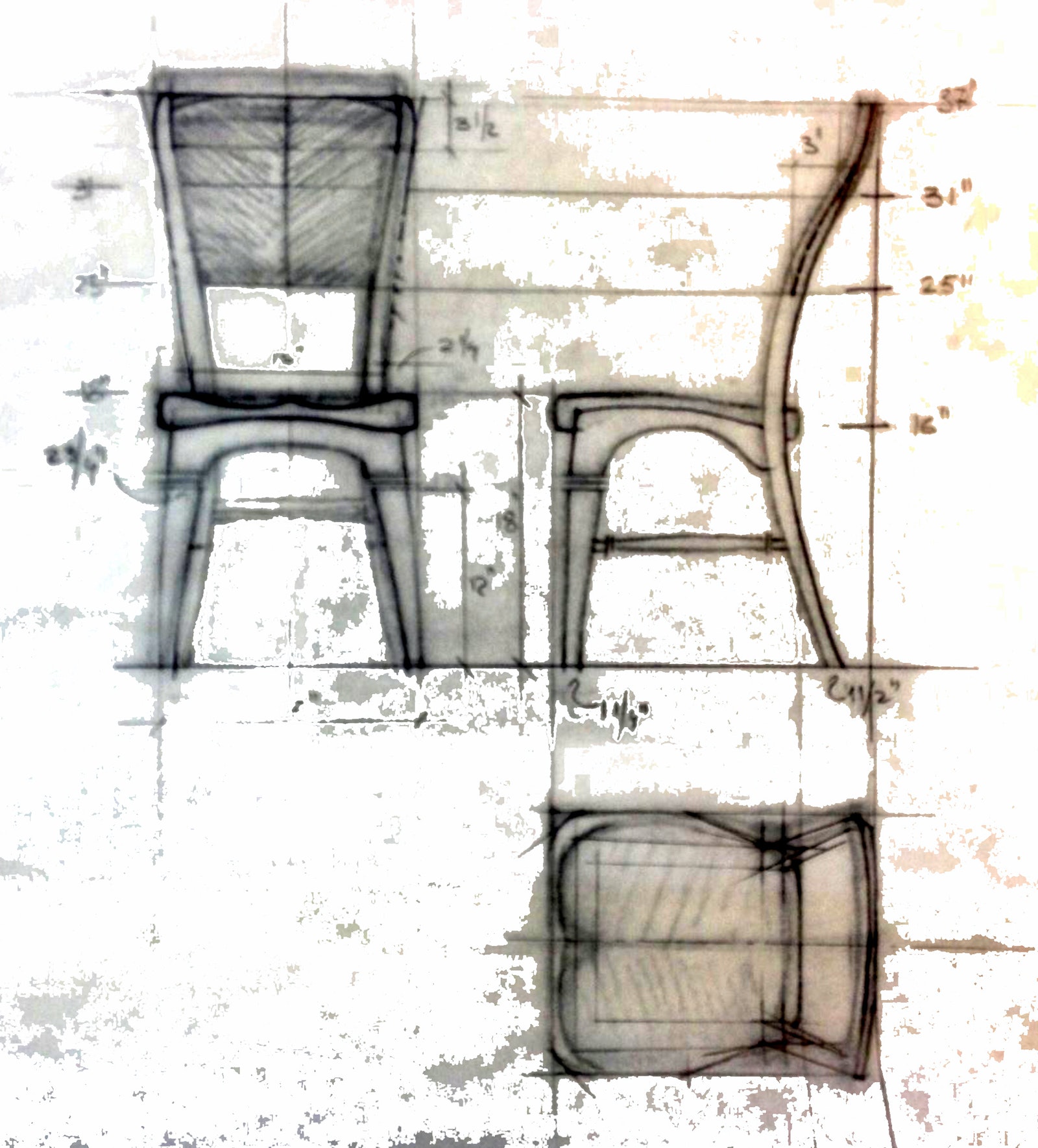 “I began the workshop without any woodshop experience, so my goal was to learn as much about woodworking as I could by studying classical chair design, wood qualities and joints. For inspiration I chose a simple and austere Shaker design. My other interest was in finding dimensions and qualities to make my chair comfortable and inspire healthy posture. I found that, without going into the intricacies of adjustable chair design, the most comfortable chairs were those with wider sculpted seat, low back support, and arm rests, similar to the Toledo Stacking Chair by Jorge Pensi. Surprisingly, the merging of two concepts (classic chair and comfort) called for an unconventional design and construction method. The basic scheme of four legs, skirt, seat, and back turned into a series of curves adjusted for the optimal lower and upper back and thigh position. I used compound curves made of steam-bent and laminated oak for the rear legs and back support, and I carved cherry wood for the seat. The process was breathtaking; it was almost as if I was sculpting my chair. After several plywood mockups the final chair emerged beautifully with a more refined appearance as I worked with alignment and patterns of wood grain and color. My perception of chairs is changed forever: I can see and understand so much more of what goes into making them, and I will never take a simple chair for granted. 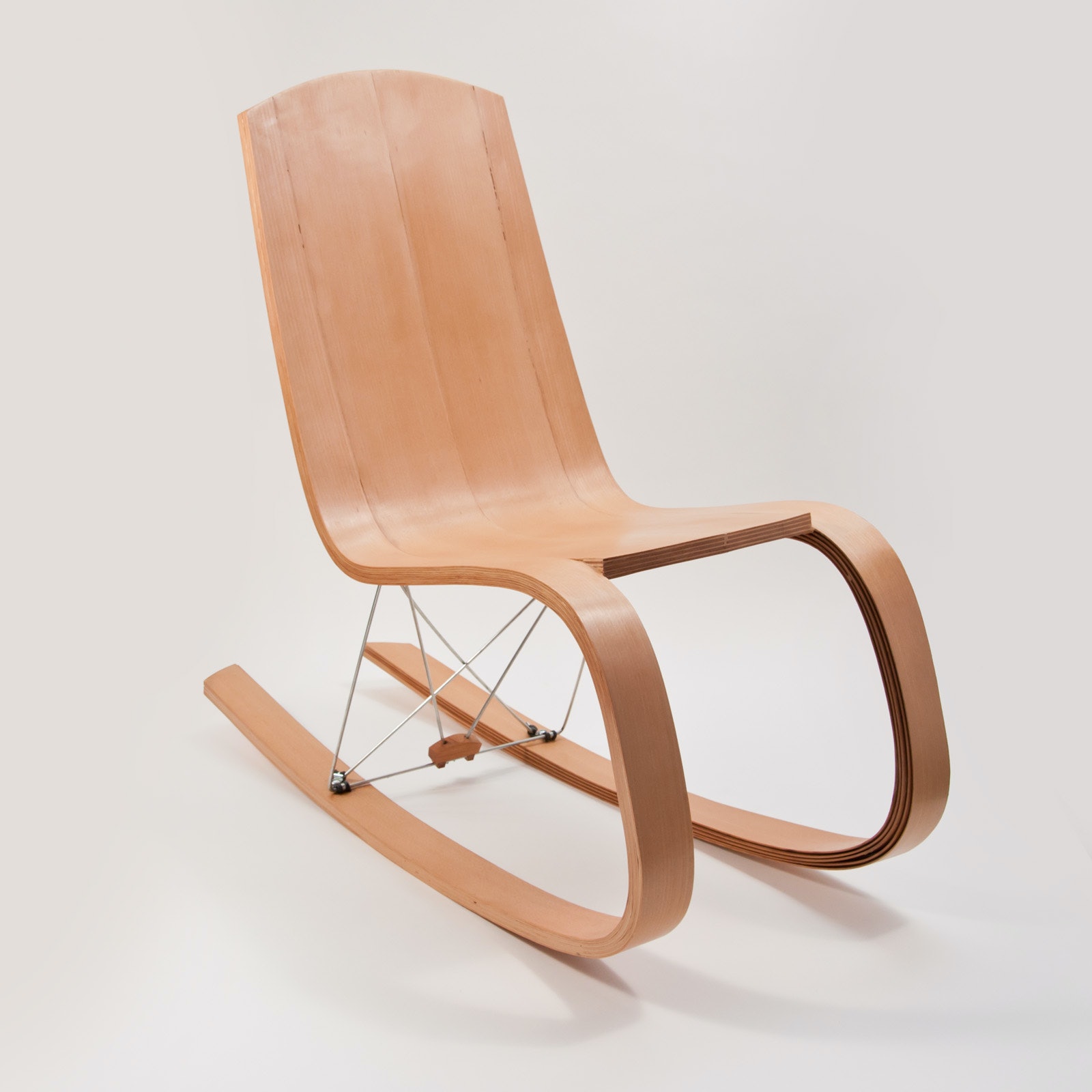 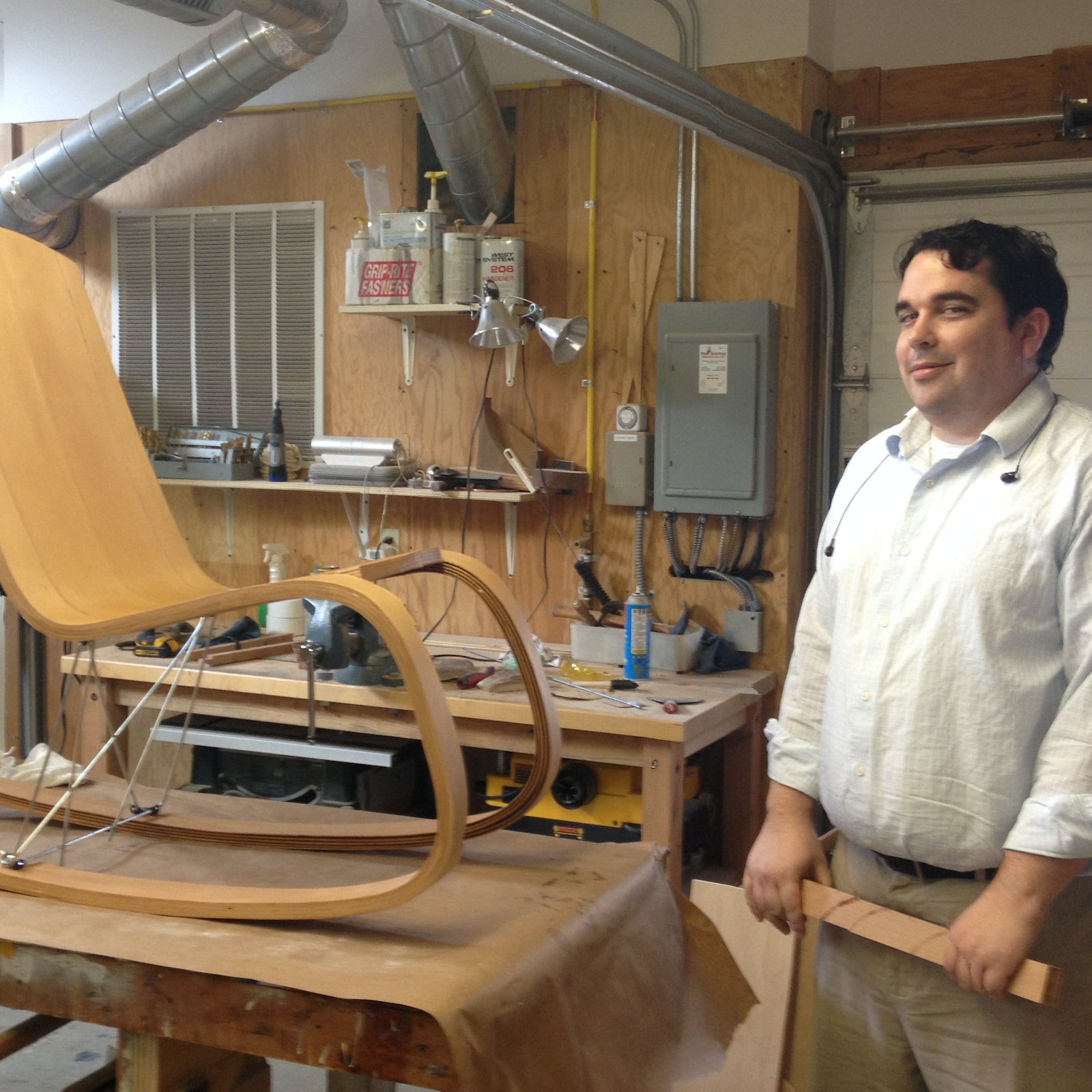 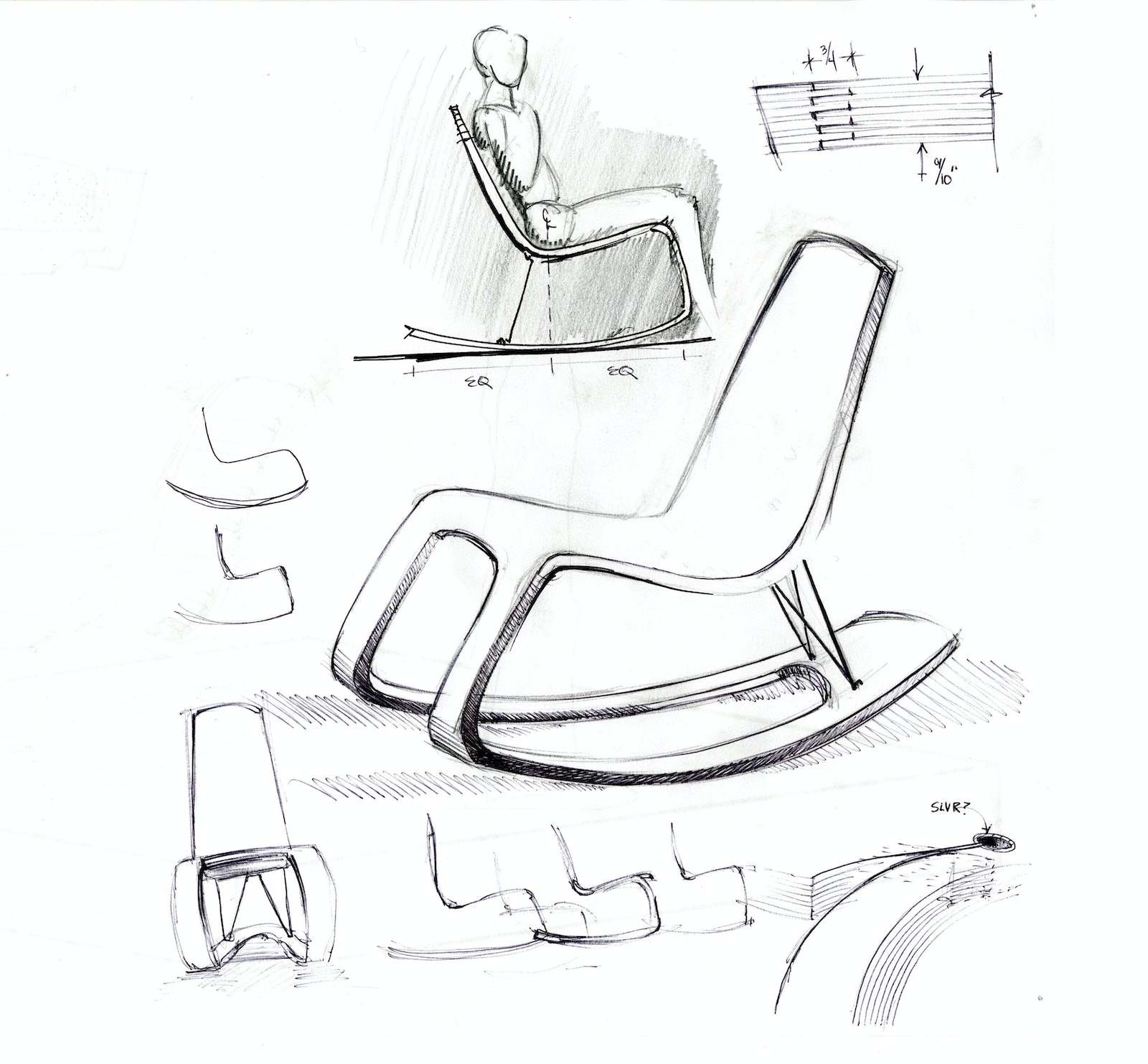 It is said that beauty lies in either creating something simple which appears difficult, or accomplishing something difficult which appears simple. In my chair, the latter was attempted. Conceptually, the design explored a single profile line that created a sculptural object of elegance and material efficiency. Knife-sliced beech veneer was chosen to minimize the waste of material, while lapped lamination ensured that the chair was visually thin while at the same time possessing monolithic strength. The slim silver lines of the truss underneath stabilized the laminated form against the disparate forces that descend upon a functional rocking chair. My chair was inspired by the American tradition of pragmatic elegance and searches for a fruitful meeting between old world craft and innovative industrialism. 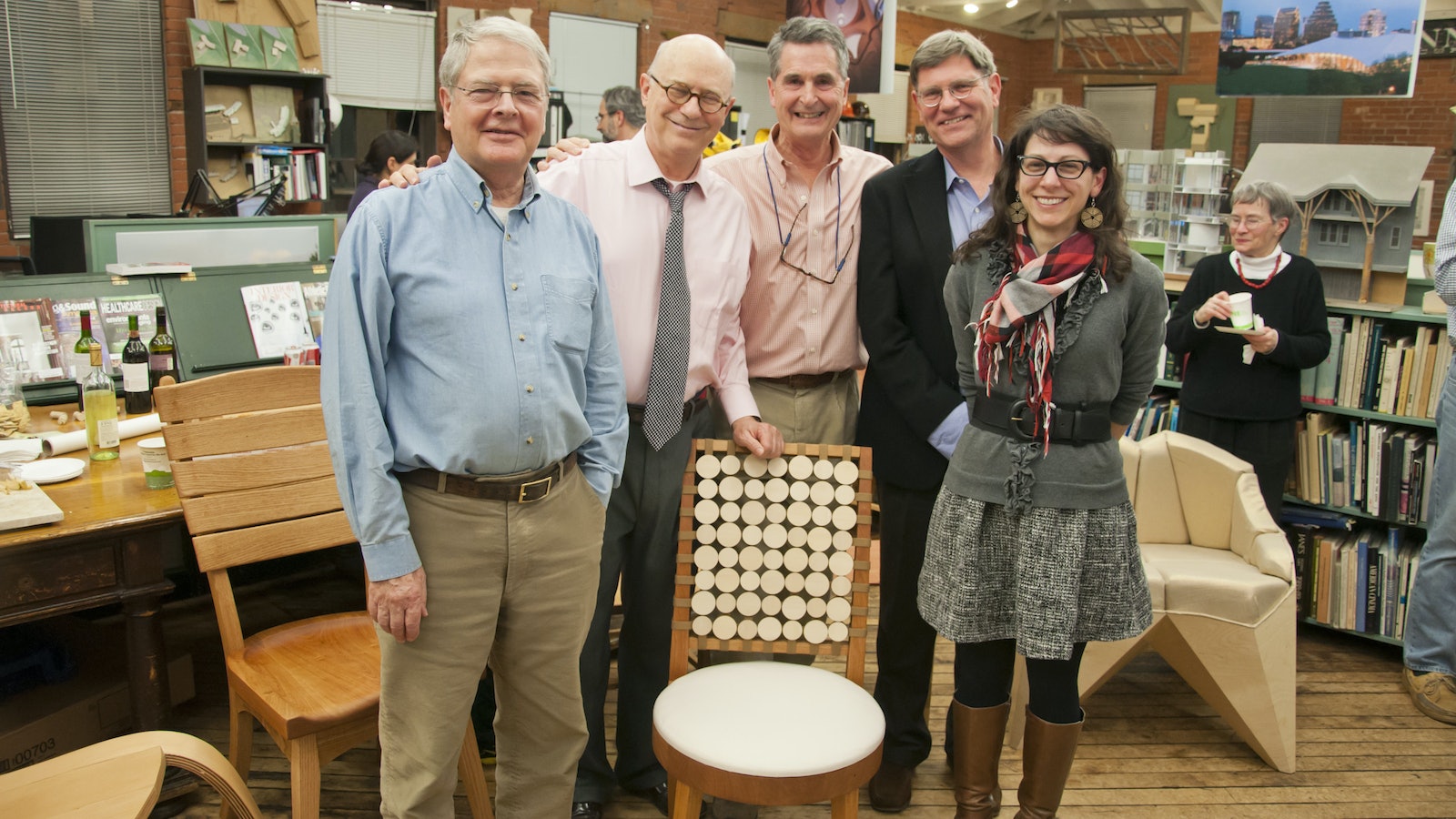 Winner Melissa Kops, her chair, and the judges

“As a craftsman, I live in a world of perfection and obsession. It’s not always healthy. There is, of course, something in striving towards these goals, but there is also something good in letting things go. I knew my apprentices would have to learn most of the intrinsic woodworking skills on their own. They would have to “just do it” in our class, on their own, and over and over again throughout their lifetime. Craftsmanship is a never ending pursuit, one that couldn’t be learned in four months. Yin and Yang. You can teach everything, and at the same time you really can’t teach anything. To learn to be a good craftsman, you have to be alone with just your thoughts, your tools and your skills; that is when you truly learn, and most of the time the hard way. What I could do was help guide them through the process which would end with a finished chair. I had to judge when to teach by showing and demonstrating in the interest of finishing the project and when to teach by doing or saying nothing in the interest of true learning. It wasn’t always easy. I had to let go, shut up, or simply say ‘That’s good enough, move on.’ I think they knew that I knew it really wasn’t good enough, and that’s OK. I learned, they learned. In the end, they weren’t perfect, but they were most certainly better than good enough, as were their completed chairs.”

“No one who goes through this class will ever look at a chair in the same way again. Architects by nature and necessity are closely allied with those who build. Some have hands-on experience in building; others do not. We had both categories in the chair project. The most rewarding thing to me was to see those who have never cut and shaped wood learning how to work with their hands to make the pieces so their designs can be born into life.”