The High Line and the Cunard Line

“Getting there is half the fun” was Cunard Line’s famous advertising slogan in the 1950s, intended to lure Americans away from flying across the Atlantic. At the time, its fleet could boast two of the finest examples of ocean liner transport, the RMS Queen Mary and RMS Queen Elizabeth, which regularly traveled between Europe and the States.

Although that catchphrase was in use well before my time, I can relate to it because, in addition to being an architect, I am a confirmed ocean liner enthusiast (with a blog to prove it). There is a connection between the two (trust me), as well as between the Cunard Line and the High Line, both being appealing examples of horizontal design and alternative modes of transportation. 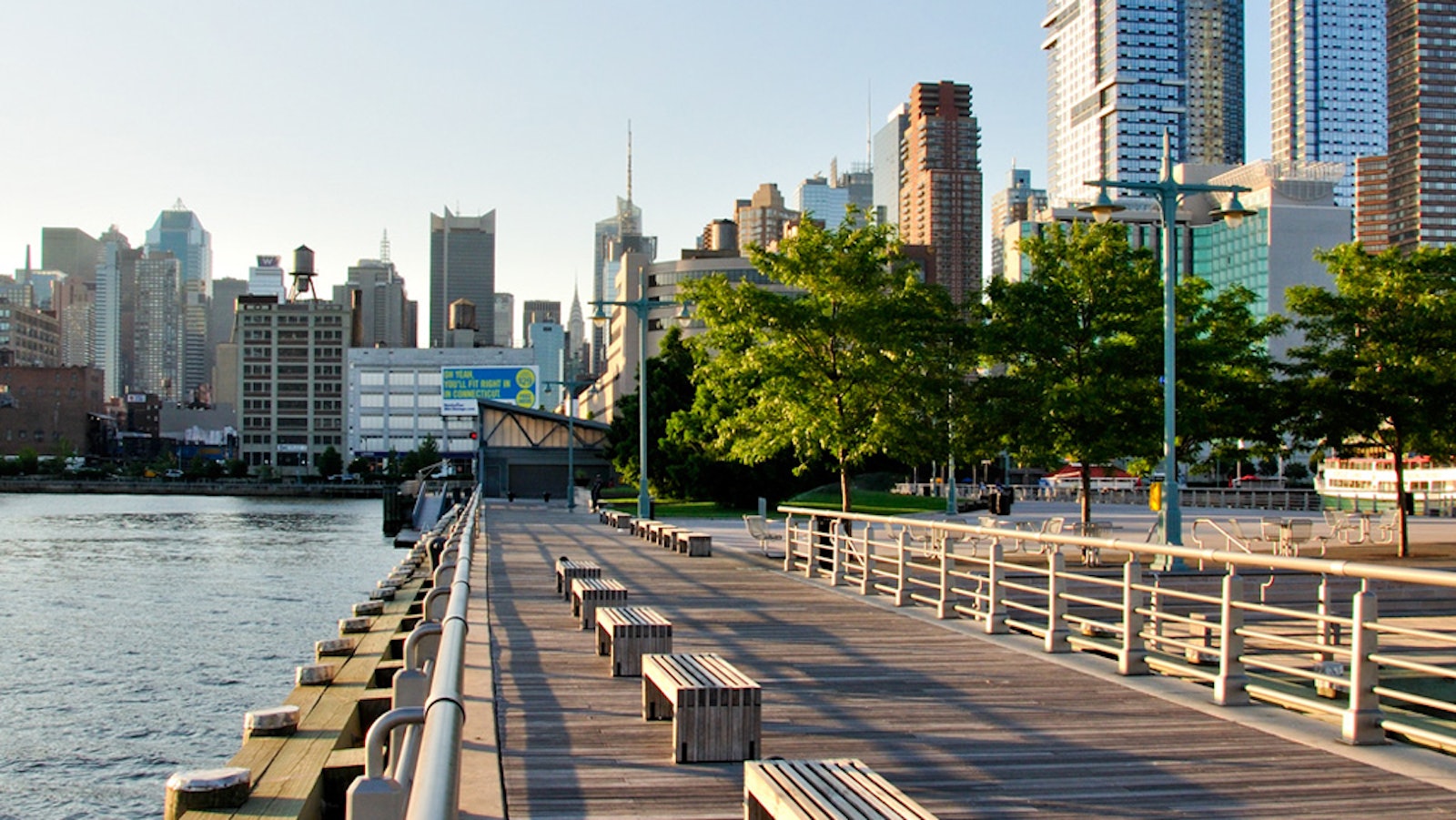 I combined my vocation and avocation during a recent trip to New York City, visiting the Hudson River piers of midtown Manhattan, aptly nicknamed “Luxury Liner Row” in their heyday. My morning began early, witnessing the arrival of the only true liner still in service, Queen Mary 2, at Pier 88, the current cruise ship complex. This is the very pier where the French Line’s Normandie caught fire and sank under mysterious circumstances during WW II.

I was standing on a newly renovated recreational pier located between the Intrepid Air and Space Museum and the Circle Line dock. Until recently the pier had been an eyesore, little more than a field of rotting pilings. New York City has finally rediscovered its waterfront, although one has to wonder: how did they lose sight of it in the first place? With a decline of freight and passenger service into Manhattan, many of the once bustling piers were neglected and in disrepair by the 1980s. Likewise, with demand waning for rail freight service, the High Line, an elevated railway built to ease street congestion, also became obsolete. 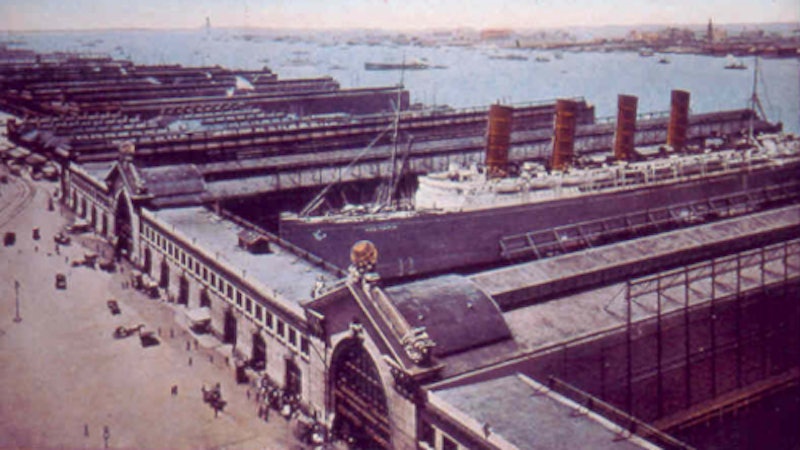 Post card shows the Cunard’s ill-fated Lusitania at Pier 54 of the Chelsea Piers, which were designed by Grand Central Station architects Warren and Wetmore. 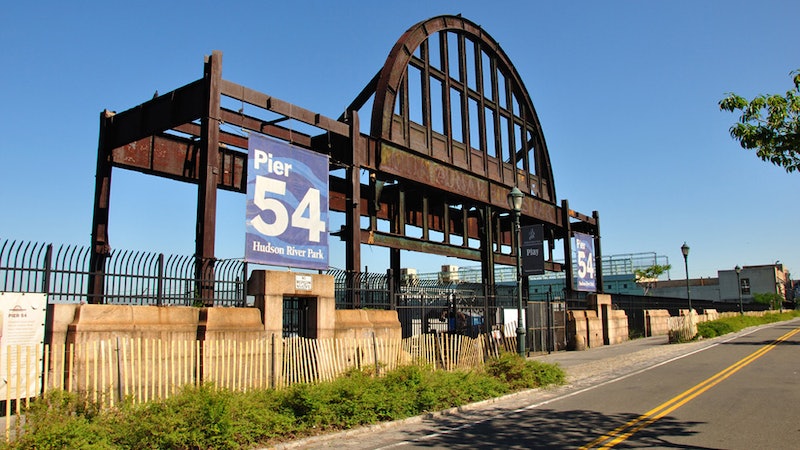 All that remains of Cunard Lines historic Pier 54, where survivors of the Titanic disaster arrived on Cunard’s Carpathia.

Fortunately, architects and planners have devised adaptive reuse schemes for these relics to transform the old infrastructure into unique urban greenways. Master plans are in place for the redevelopment of the remaining piers into a series of connected parks and recreation venues stretching from the current cruise ship terminal at 46th street all the way down to Battery Park and Ground Zero, linking them with a bike and pedestrian corridor already in place.

With the partially completed Freedom Tower looming on the horizon, I decided to hoof it to Ground Zero, experiencing each pier and park places along the way. During the walk I saw a surprising amount of maritime heritage on display, including the Pier 66 Maritime complex with a floating railroad barge featuring the Lightship Frying Pan and the NYC fireboat John J. Harvey docked there. While encouraged by all this, I knew disappointment lay ahead.

Several years ago, I had seen from the deck of Cunard Line’s Queen Elizabeth 2 – as we made our way up the Hudson after a transatlantic crossing – a rusting steel arch frame, all that remains of the head house of Pier 54. The loud speaker informed us that this was where the Lusitania departed from on her last and tragic voyage and where Titanic survivors disembarked in 1912. Unfortunately, James Cameron’s epic film, and the resulting groundswell of interest in all things Titanic, did not come in time to prevent the demolition of this once grand, historic structure in 1991.

For preservationists, this was a bit of déjà vu, reminiscent of the demolition of Penn Station in 1963, which jump-started the preservation movement in this country. While last minute efforts could not save the Pier 54 building, parts of its interiors and the steel archway were preserved. One can only imagine what this structure, by the same architects who designed Grand Central Station, could be transformed into today. All is not lost, though, and the significance of this place remains. Its grounds are still in use for events, and plans are in place to redevelop the area to showcase its history. 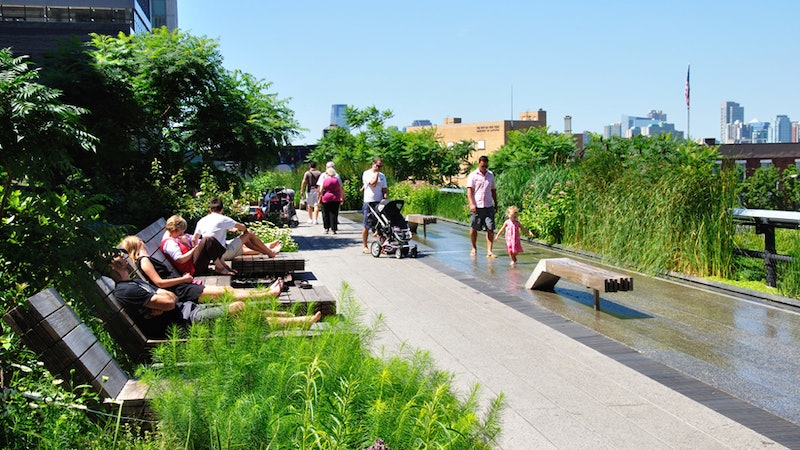 The High Line’s popular and ingenious water feature was in use on a perfect summer day. 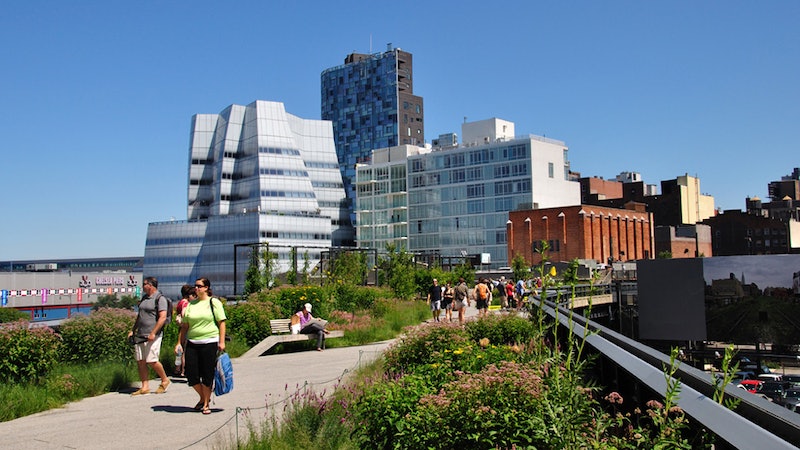 So what is my particular interest in Cunard Line? The answer is both historical and visual. Sure, there are countless other cruise lines with modern mammoth ships that look like floating amusement parks or improbably stacked apartment flats, but they bear little resemblance to the stately and graceful ocean liners that preceded them. As any architect worth his salt can tell you, “form follows function,” and the classic cruise ship design is as appealing horizontally as New York’s skyline is vertically. Both forms make perfect practical and aesthetic sense.

Cunard is the only line today that maintains the traditional transatlantic route, which most others have abandoned for gratuitous cruising to warmer climes. To maintain this service, a sleek, old school ocean liner is required for the necessary speed and seaworthiness to handle the unpredictable seas of the north Atlantic. Cunard Line also was responsible for transporting my grandfather and other kin from Scotland to these shores early in the last century.

From the shores of the Hudson, I headed inland to the High Line, the city’s hugely popular adaptive reuse of an elevated railroad. The second phase of this linear greenway was recently opened and plans are in place for development of a final section. The perambulatory park has wonderful views of the Statue of Liberty, the Hudson, and buildings by the likes of Frank Gehry and Jean Nouvel. No longer transporting beef to the Meat Packing District, the High Line now delivers tourists to lower Manhattan – and peace of mind to addled urban dwellers.

I did a lot of walking this day – and toyed with the idea of hailing a cab. But in my heart I knew that getting there is half the fun.