With the conclusion of the 2010s nearly upon us, we take a look back at our most popular projects from the decade as decided by you, the visitors to centerbrook.com.

This LEED Silver project for the University School in Ohio added 52,000 square feet of classrooms for history, math, and English and foreign languages along with labs for physics, biology and chemistry. Completed in 2012, the building’s sustainable features include a pond-source geothermal heating and cooling system, a green roof, and bioswales – all of which are incorporated in the upper school’s outdoor classroom pedagogy. 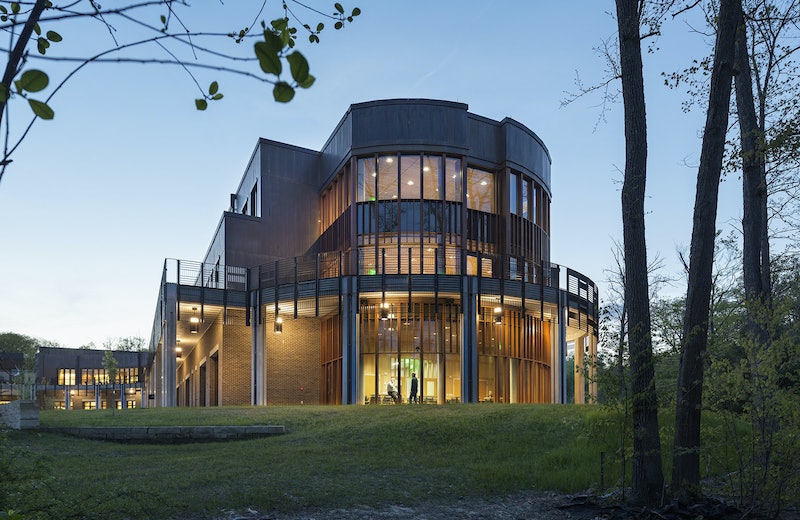 The People’s United Center may have been the first project on York Hill, and the new home for Quinnipiac University’s premier sports programs, but the 85,000-square-foot Rocky Top Student Center became the everyday heart of the new campus when it opened three years later in 2010. Designed with the atmosphere of a mountain lodge, Rocky Top features a 500-seat dining hall, student health facilities, meeting rooms, a mailroom, lounges, and a striking outdoor terrace with views of Long Island Sound. A bar and lounge is currently being added for the 2020 spring semester. 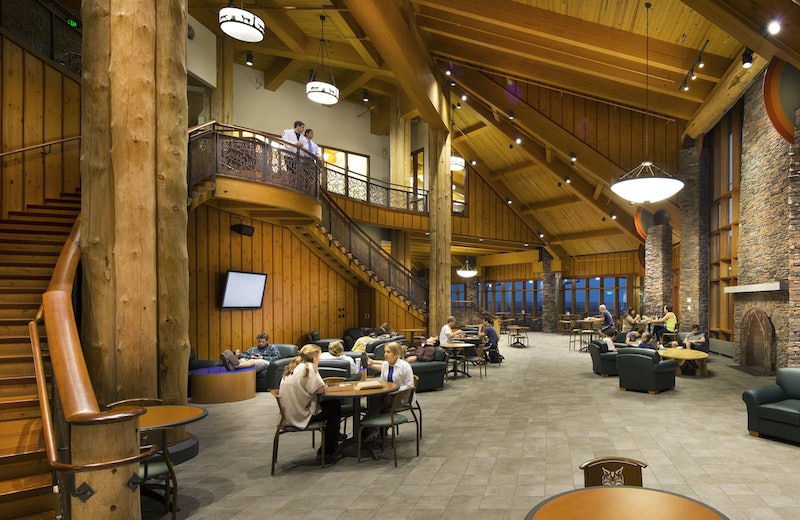 No. 8 – Peabody Museum of Natural History

One of two projects that make this 2010s list that has yet to be completed, the renewal of Yale University’s revered Peabody Museum of Natural History is also poised to be one of our biggest storylines entering the coming decade. The extensive and complex project includes a complete renovation of the museum – the first since it opened in 1925 – and an expansion of nearly 58,000 square feet that features a four-story entrance tower and sky-lit central gallery. When complete, the project will increase space for exhibits by 50-percent. The renovations are expected to commence in summer 2020. 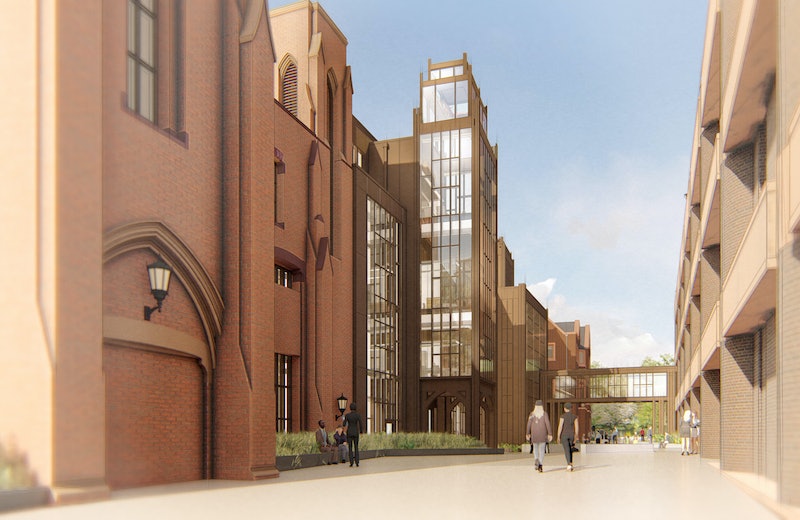 No. 7 – Jackson Laboratory for Genomic Medicine

Opened in September of 2014, this new 184,000-square-foot research facility was the flagship for Bioscience Connecticut building projects at the UConn Health campus in Farmington. Designed in collaboration with Tsoi/Kobus Design, the LEED Gold facility can accommodate up to 300 biomedical researchers and staff, and features a 200-seat auditorium. The building has earned a combined six awards for design, engineering, sustainability, and lighting. 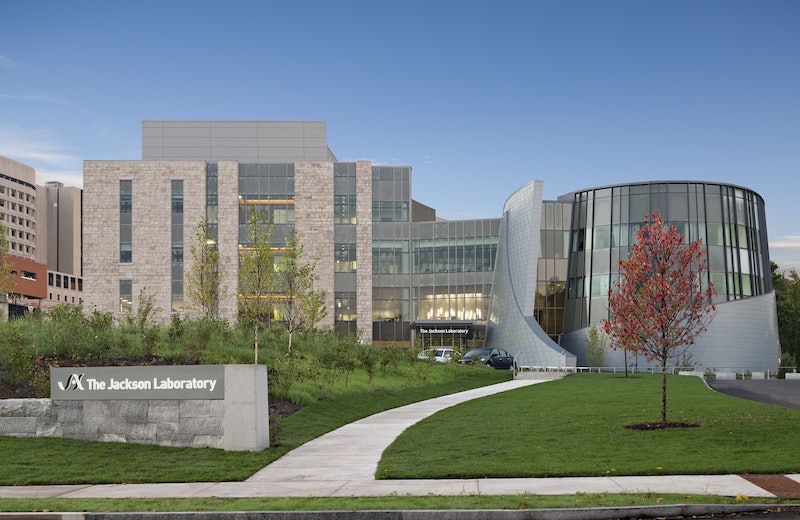 Quinnipiac’s largest residential complex with over 500,000 square feet and 1,500 beds came online in 2010 along with the Rocky Top Student Center. The Crescent Residence Hall, nine stories high in one section, is the largest of the seven buildings, and is bracketed by another smaller hall to the east and five townhouses to the south and west. The buildings conform to the natural terrain by curving around and stepping down the picturesque hilltop site. 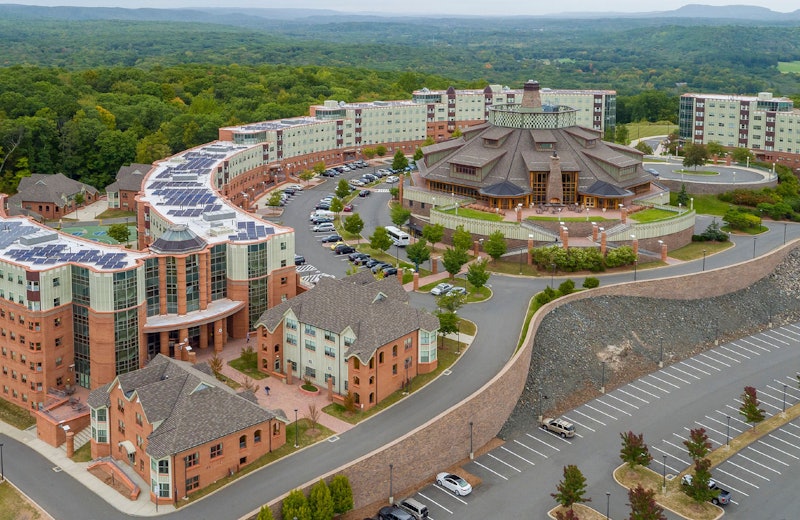 Exhibiting the high level of interest sports facilities can garner, this new arena makes the top five on our all-decade list even though Fairfield University is still months away from breaking ground on the project. The new on-campus home for Stags basketball and volleyball teams will accommodate up to 3,500 in two tiers of seating that will also provide an intimate setting for concerts, commencements and other campus events. 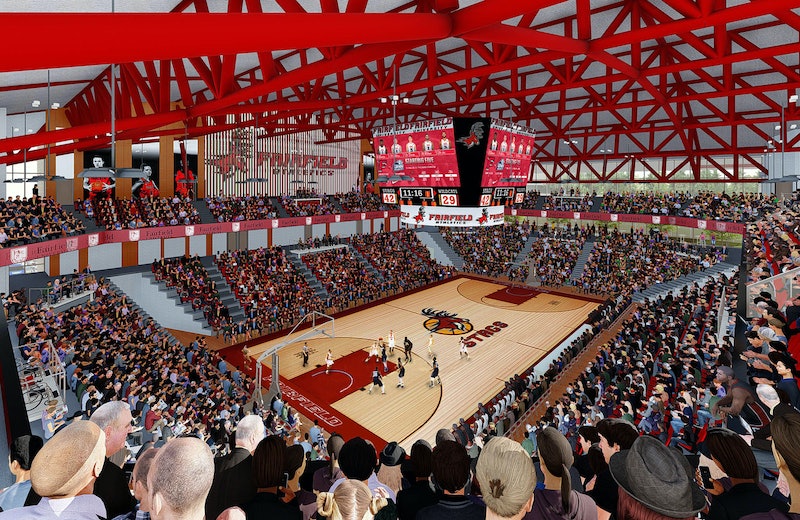 Like the People’s United Center, this complex at Quinnipiac also features two athletic performance facilities. Opened in the summer of 2017, the Soccer/Lacrosse Stadium features seating for 1,500 with a FieldTurf playing surface while the adjacent Field Hockey Stadium accommodates 500 seated fans with an Astroturf field. The Soccer/Lacrosse stadium has hosted Metro Atlantic Athletic Conference men’s soccer postseason games each of the past two seasons and the Field Hockey Stadium welcomed the Big East Conference Championship for the first time this fall. 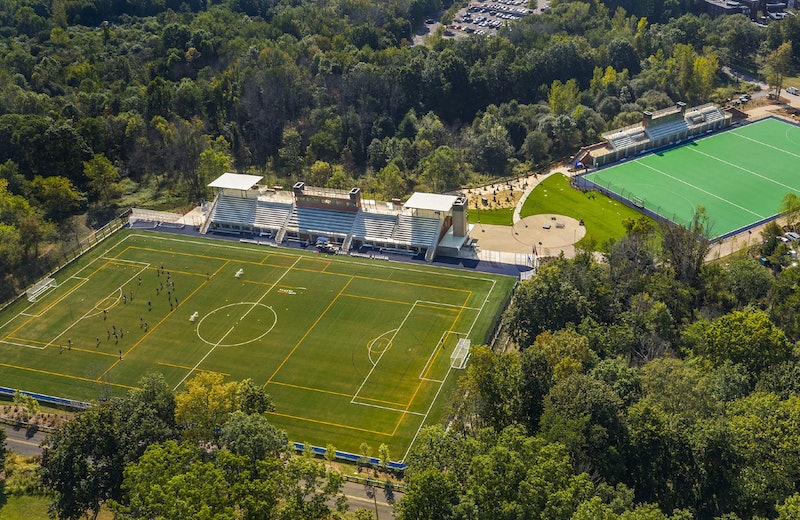 Certified LEED Gold, this 49,000-square-foot building opened at Berkshire School in 2012. The facility increased Berkshire’s space dedicated to math and science by 129-percent through classrooms and labs, and features a 100-seat auditorium plus department offices. The building is designed to take advantage of its dramatic Massachusetts Berkshires site by facing Buck Valley to the east, while also looking out to Mount Everett in the west. 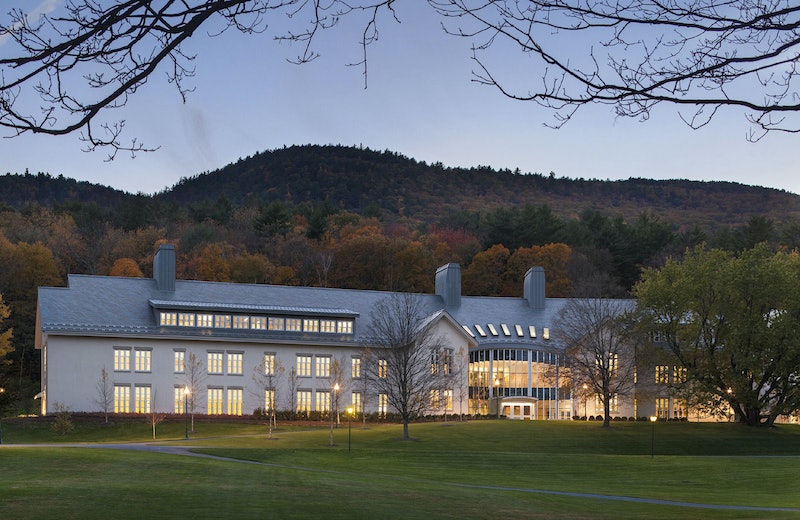 Opened in 2012, the Biomass Heating Facility at Hotchkiss School is one of the most celebrated designs in our firm’s four-plus decades. Nestled alongside the Hotchkiss golf course in the rolling hills of the southern Berkshires in Connecticut, the Biomass Facility was designed to blend into the landscape as well as serve as an iconic representation of the school’s commitment to achieving carbon neutrality. The Biomass Facility provides heat for all 85 buildings on the campus by burning wood chips, and its operation doubles as a classroom for ecological study. In 2016, the Biomass Facility was named by ArchDaily as one of the Top 100 most important works of architecture in the U.S., and a year later beat out seven other finalists in online balloting to win the AIA Connecticut Treasures (People’s Choice) Award. 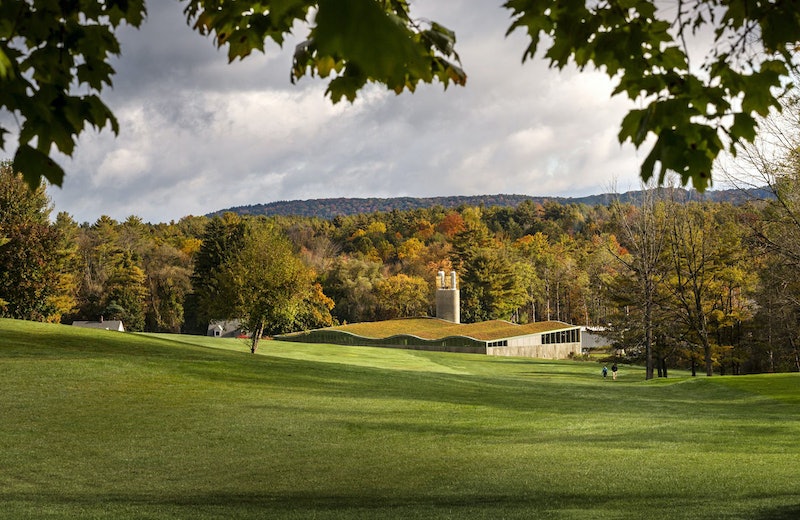 The Thompson Exhibition Building has brought an entirely new face to the Mystic Seaport Museum in Connecticut since it opened in the fall of 2016. Envisioned as an iconic new front door to the museum that would transform it into a year-round destination via the exhibition hall, the Thompson Building has already reached great heights. The hall itself was designed to specifications that would attract the world’s elite exhibits, and that’s the case currently, as Tate London has loaned the magnificent J.M.W. Turner Watercolors show to the museum through February. The Thompson Building was named to ArchDaily’s 100 Best Wood Architecture Projects in the U.S. list, has earned an AIA Honor Award, and most recently garnered a national design award from WoodWorks. 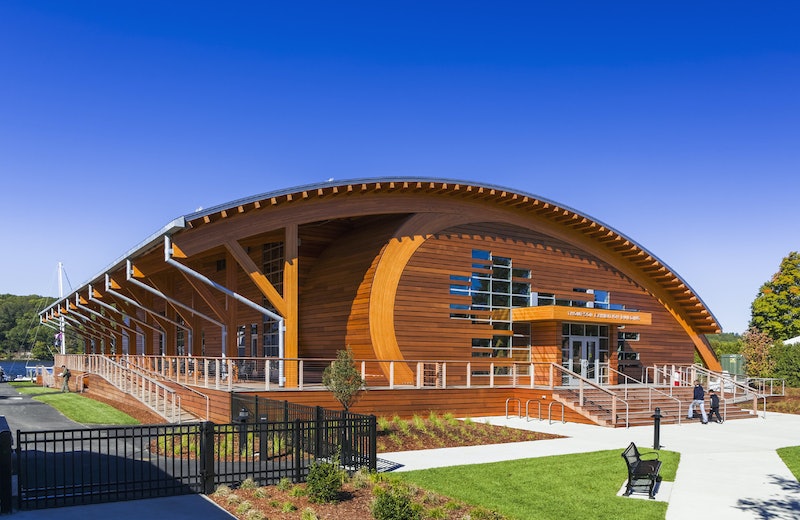 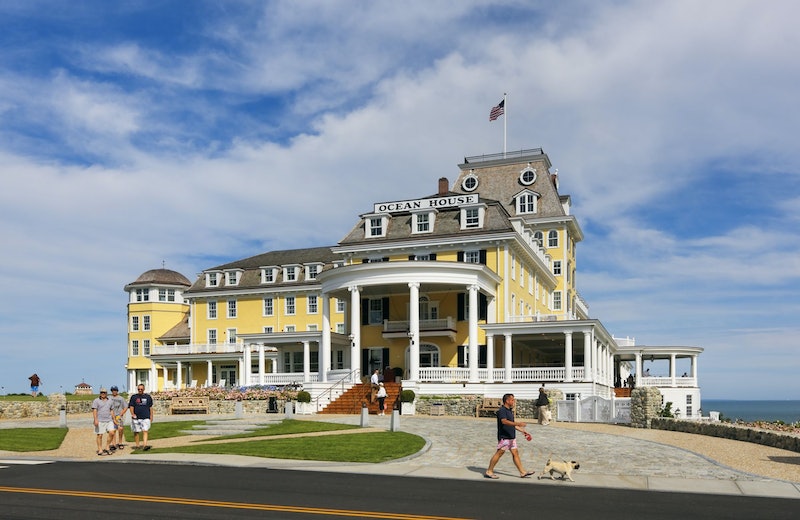 Best of the Rest

Narrowly missing the top 10 most-viewed projects during the decade were a private residence overlooking the Pacific Ocean, the Addison Gallery of American Art at Philips Academy Andover, and Sacred Heart University’s Jorge Bergoglio Residence Hall. And a tribute to the depth of our portfolio from the decade, Ocean House – the five-star resort in Rhode Island that is annually our most publicized design worldwide – comes in No. 19 on our project page views list. 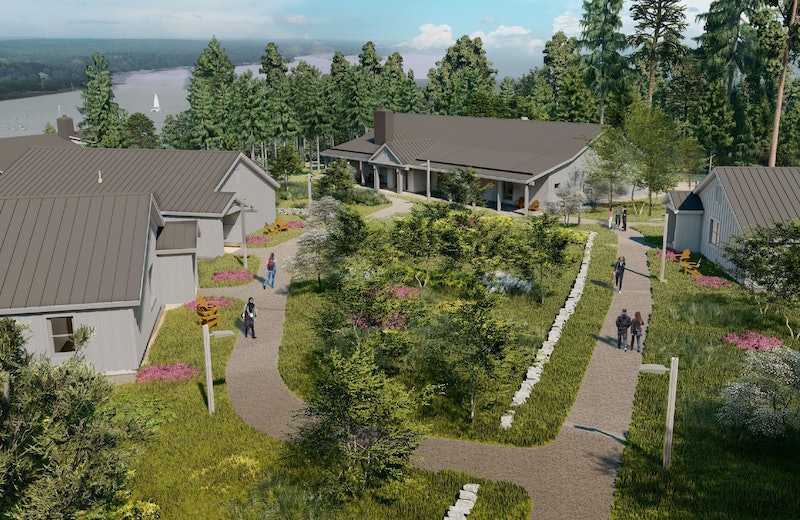 There are a number of exciting projects on the boards that will propel us into the 2020s in addition to the Yale Peabody renewal and Fairfield arena. There’s a coastal studies center (pictured) for Bowdoin College now in construction, a student center at Calvin University, Cold Spring Harbor Laboratory’s expansion on campus and into Brooklyn, a new high school for Greenwich Country Day School, and a library in New Canaan, Connecticut, to name just a few.