One of the sayings we have around here about our approach to design is; “endearing is enduring.” As we found during a recent event, the UConn Chemistry Building is Example 1.a. of that catchphrase.

In the two decades since the ribbon was cut, the building has endeared itself so much so that the Chemistry Department organized two days’ worth of events to celebrate its 20th anniversary. We were honored to take part in the festivities. Principal-in-Charge Mark Simon and Project Manager Jim Coan led the Blueprint Architect Tour of the building, and Mark took part in an exclusive Q&A session, going behind the scenes of how the project came to fruition. 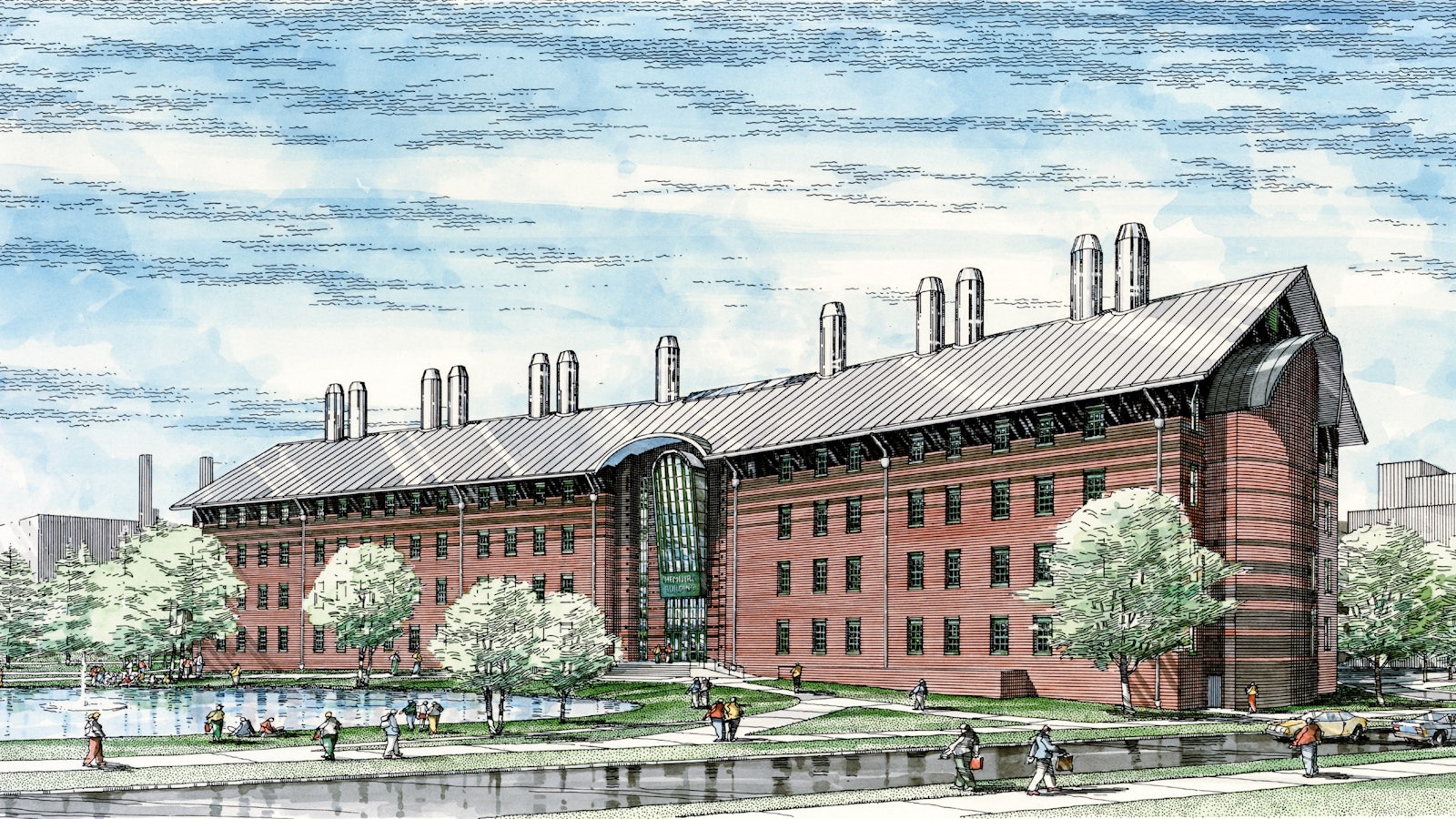 We dusted off the original model from 1996, gave it a new base and cover, and she's ready to head to Storrs for @UConnChem's 20th anniversary celebration of the Chemistry Building next week pic.twitter.com/4hpCyZ5bzO
— Centerbrook Architects (@Centerbrook) April 12, 2019

As with any anniversary event, it was a trip down memory lane for those involved from the beginning. The first of two guided building tours started with a look at our model, which prompted Art Dimock (then-department head, now-lecturer emeritus) to recall a tidbit from the original planning meeting where the lone request from UConn Facilities Management was that the building have a pitched roof. Apparently one less building they had to worry about a flat [leaky] roof was a high priority.

The tours elicited a number of questions and comments. During one chem lab stop, a guest mentioned that there is a noticeable lack of any chemical odor. “It smells good in here.” Art attributed that to the building’s robust ventilation system.

Another guest, who is a new professor in the department and joined the tour to learn more about the building, was impressed that the labs have whiteboards on three walls – providing ample space for class participation.

.@MarkSimonFAIA and UConn's Art Dimock talk about working with lab consultants and the faculty during design of labs, to make sure all bases were covered. They note only things that have changed in 20 years since are more student lockers and flat screen monitors. #UConnChem20 pic.twitter.com/BNs6O979T8
— Centerbrook Architects (@Centerbrook) April 18, 2019 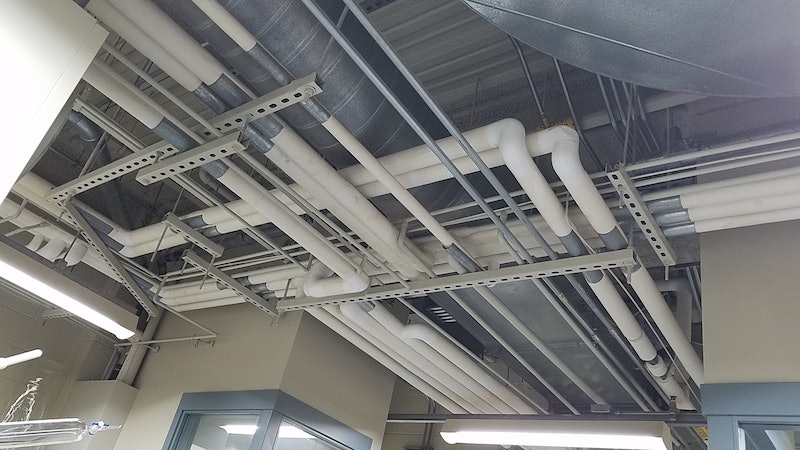 One of the main talking points across both tours was the considerable extent of building systems and services necessary for a chem lab – fire protection piping, supply air ductwork, power, water, lab gases, telecommunications, etc. – and how they were laid out in layers that rundown the hallway and split off to each lab. There are no suspended ceilings in the lab areas and corridors. The original intent was, as needs and wants change over time – say changing a dry lab to a wet lab, or vice versa – that conversion work would be minimal. Building manager Tyler Cardinal confirmed the ease of access is indeed as originally intended.

Special access to the attic was granted for our tours. The sheer size of the equipment housed there is quite impressive, with the massive air handlers needed to properly vent a 200,000-square-foot chemistry building. As Mark noted, it’s also defacto bonus storage space not found in a flat roof building.

During our stop in the attic, @MarkSimonFAIA mentioned a benefit of the gabled roof is that the massive air handlers are housed inside rather than atop a flat roof. Building Manager Tyler Cardinal concurs, much easier to service that way. #UConnChem20 pic.twitter.com/kYaHS0UcBW
— Centerbrook Architects (@Centerbrook) April 18, 2019

Overall, there have been very few changes in the 20 years since the Chemistry Building opened. A small library was converted to a tutoring room since journals are now accessible online. A computer lab was also adapted to a research lab since dedicated desktop workstations are no longer a necessity. There are more student locker spaces in the labs since enrollment is up in the last 20 years. Naturally, the size of equipment and instrumentation has decreased over the years, so the way some spaces are utilized has changed a bit as a result. The nuclear magnetic resonance equipment, for one, has changed dramatically. But as Mark commented upon entering one of the general chemistry labs, which can be extrapolated to the building on the whole, it pretty much is as it was in 1999.

And as it became clear from the event’s planning stages through execution, the building has indeed endured as it has endeared itself to so many. Chemistry department head Dr. Christian Bruckner, a great champion of the building, noted that only one chem faculty member has chosen to leave UConn for another institution since the building opened. He added that it is likewise a great recruiting tool for prospective faculty.

In fact, the Chemistry Building is so revered, it was commemorated on a cake during the event’s luncheon. Two cakes, to be exact!

Fun Fact #1: The 14 large stacks perched on the roof ridges (see above) are prominent feature of the Chemistry Building’s exterior. Each is fed by multiple exhaust ducts – some more than others (see below) – but they are uniform in their size at seven feet wide by 19 feet high. Wind studies determined the height that would safely disperse the exhaust and reduce the potential for reentrainment at air intakes at this and adjacent buildings. And to add to the stack discussion – one of the 14 is actually for aesthetic purposes to keep the uniformity, and has no exhaust function. We’re not telling you which one, though! 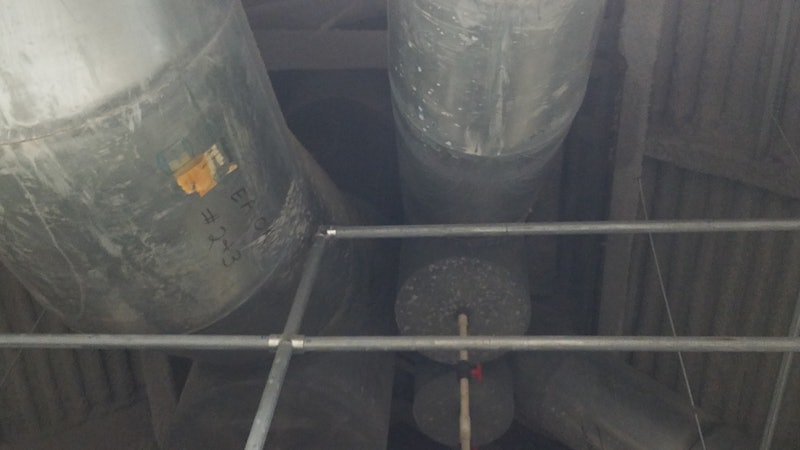 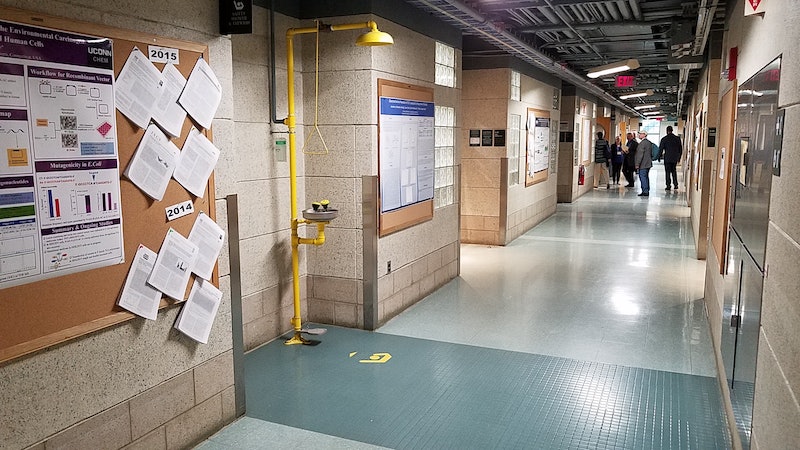 Fun Fact #2: The floor tile in the hallways of the two lab wings have a feature that would likely go undetected by a guest, but is essential knowledge to lab users. The darker tiles designate where the emergency services are located. So if one accidentally gets chemicals in their face, perhaps resulting in impaired vision, they can trek toward the distinguished dark tiles for the wash station. And to answer a follow-up question from the tour, there is no drain at the emergency wash station since the chemicals have to be safely contained.

Fun Fact #3: The Chemistry Building has its own machine shop in the basement, where instruments can be manufactured or modified as needs arise for different experiments. There was also originally a glass blowing shop next door to the machine shop, but that service has since been outsourced.

To see more about the 20th anniversary events, UConn Chemistry set up a webpage on their site to commemorate the milestone. You can also check out this preview of the events from the UConn student newspaper. 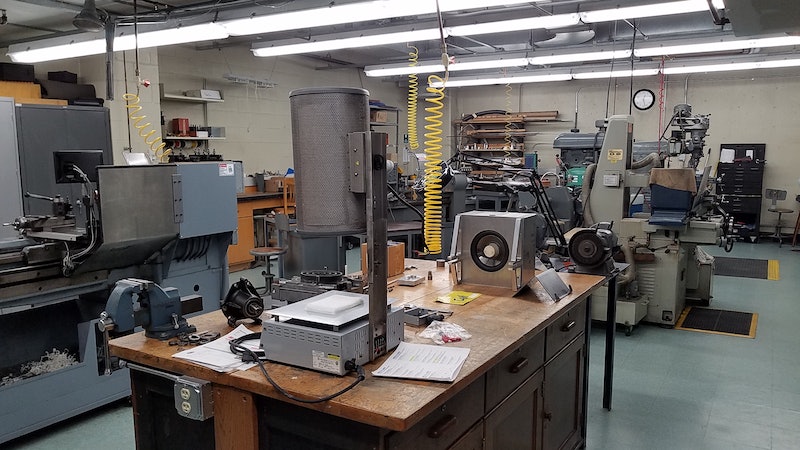