A professional musician and professor wanted an addition and renovation to her dark, rambling bungalow on the Connecticut shoreline. She desired a home that was full of natural light and open to the landscape. She also requested that her Japanese heritage and her love for the violin be incorporated throughout along with local building techniques and resources. 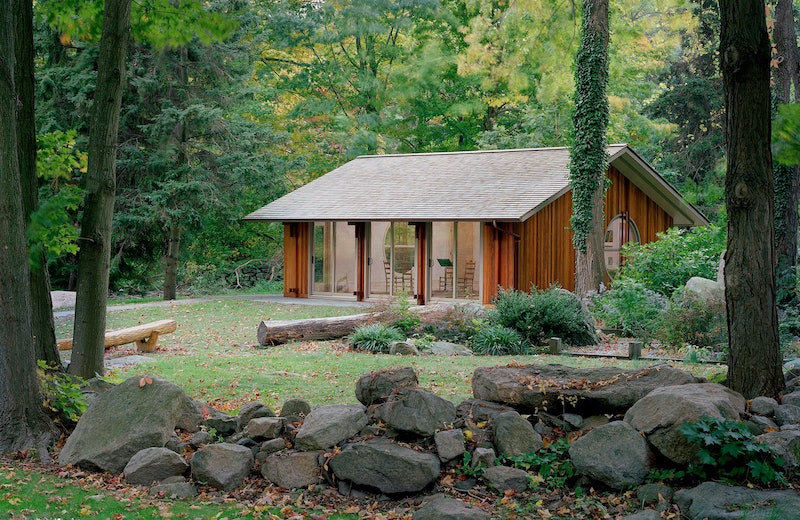 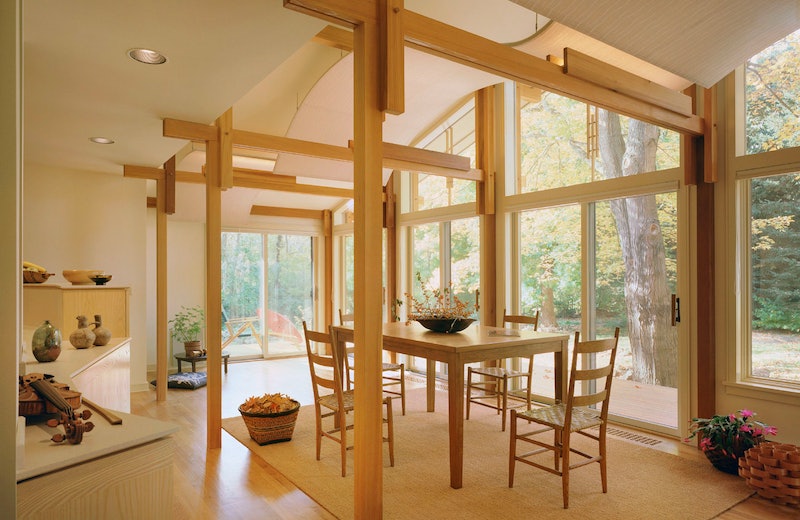 The design blends the character of Japanese farm buildings with rural architecture of southern Connecticut. In an effort to restrain the budget, the original roof was left intact. The architect added an entry porch and flower wall, defining the entrance to the house. To contribute to a sense of lightness and transparency, views are provided from the new entry through the house to a large window wall that overlooks the backyard. The use of wood beams and columns, which extend across the living room to the outside, creates a further visual connection to the landscape.

The character of the post-and-beam detailing recalls local barns, nearby Stick-style houses, and traditional Japanese construction. Interior doors have wood and rice-paper panels set in standard American pocket doorframes. The curves of the kitchen cabinets echo those of a violin, as do the fabric ceiling panels in the living room. Interior wood is joined with bronze pegs resembling violin keys, while the front screen door mullions represent a music staff with bronze notes. 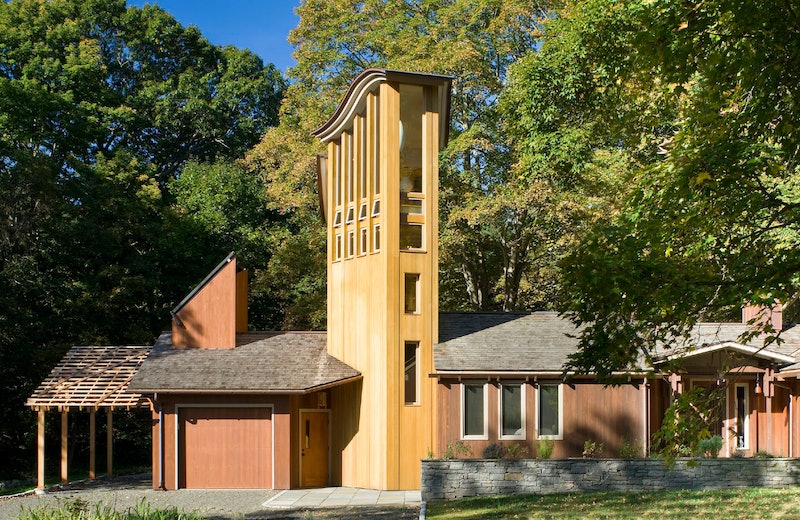 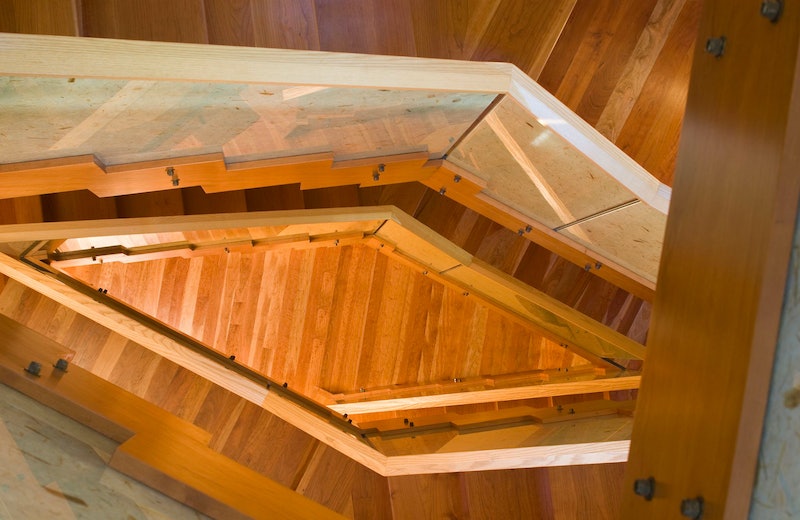 A tower studio is the latest addition to a musician’s residence. A master violinist and music teacher who performs around the world, the client wanted to expand her house by adding a tower studio that would regale her with treetop views as she practiced, alone, with students, or fellow musicians.

We were inspired by our client’s Japanese heritage, New England roots, interest in nature, as well as her talent, energy and knowledge. Our goal was to reflect in the design the same kind of exuberance that she evinces in her performances.

The primary challenge was to make the narrow 35-foot-tall tower rise gracefully from what had been one bay of an existing attached garage, while also creating a pleasing and suitable interior access to the intimate 10-foot by 10-foot studio. The tower was fitted cater-corner between the house and garage, and using a variety of wood, additional contrasts are created both inside and out. Just as a violin is crafted from varying woods to establish a unique sound, the tower addition uses the same approach to create a distinct visual symphony.

Inside, the cherry wood staircase that climbs the tower to the treetop studio is cantilevered from the walls to keep the smallish space free of columns. Random bands of ash paneling on the walls become narrower toward the top of the tower, and daylight pours in from a band of windows below the studio. The intention is to make the space more open, to appear as large as possible. The railings, fashioned from two layers of glass with rice paper in between, are sandwiched between the rough stringer and the cherry finish stringer.

Outside a carport trellis of red cedar contrasts with the lighter cedar walls of the tower that, in turn, contrasts with the darker, older cedar of the existing house. A solar hot water system atop the garage offers a modern, gleaming oasis amid the traditional wood.

A waving and playful overhanging roof is evocative of musical notations and the curves of violins, and by breaking the roof curve, the top feels smaller and more vertical than if the curve was continuous. The break also helps the tower appear to emerge from the existing house more gently. 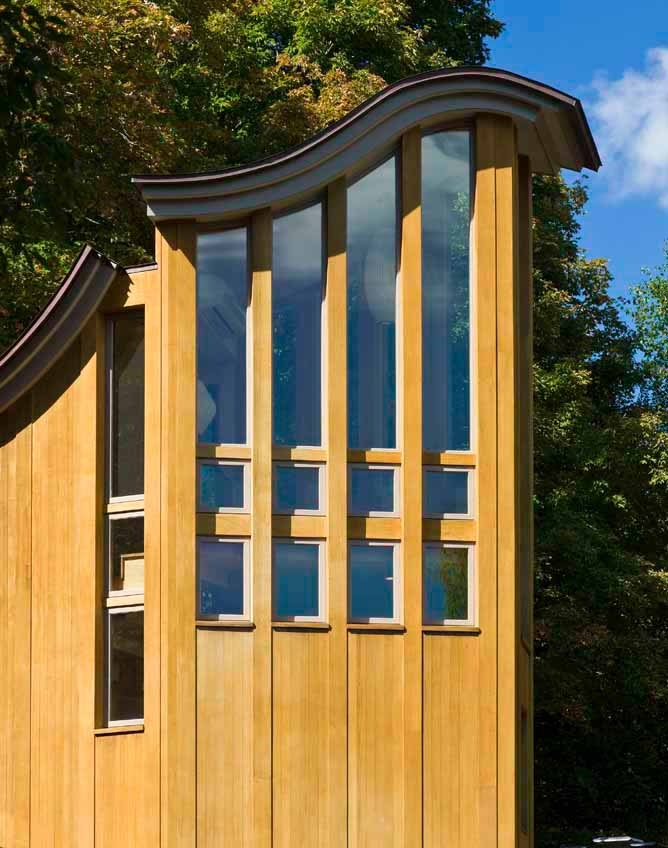 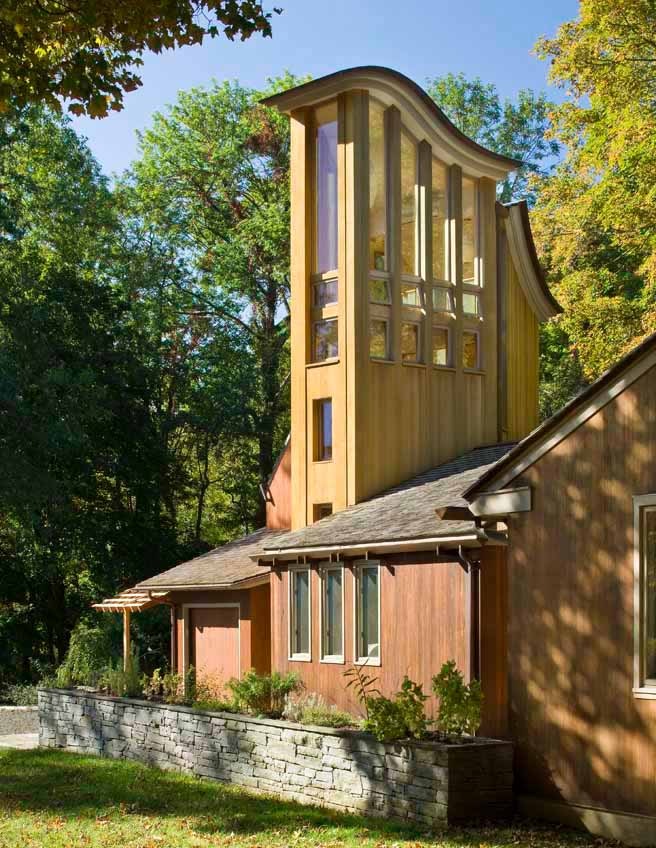 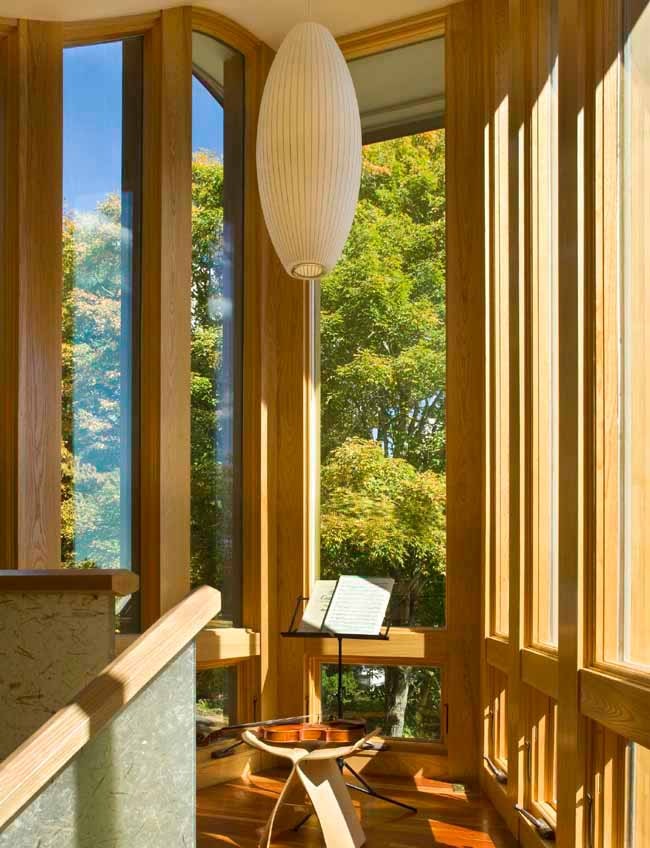 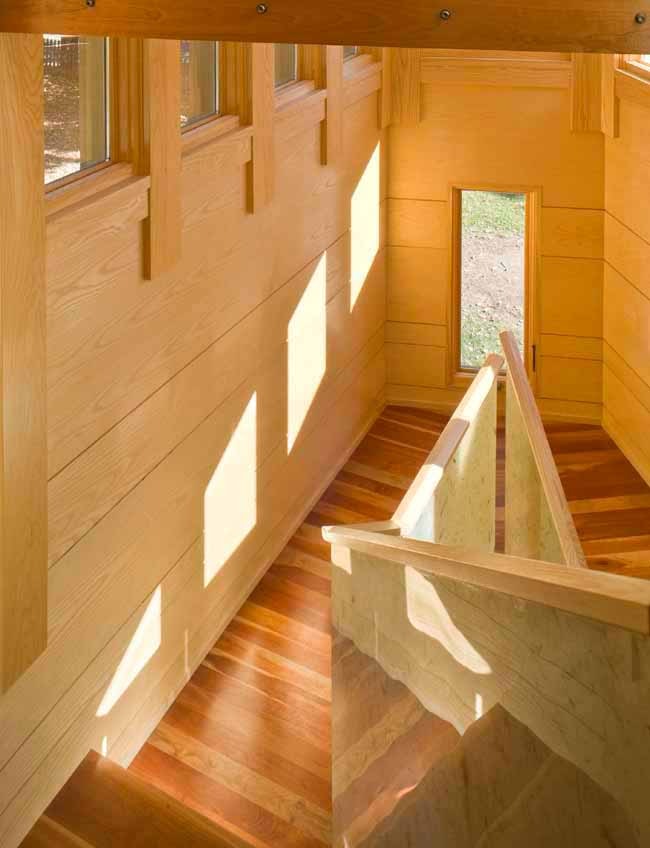 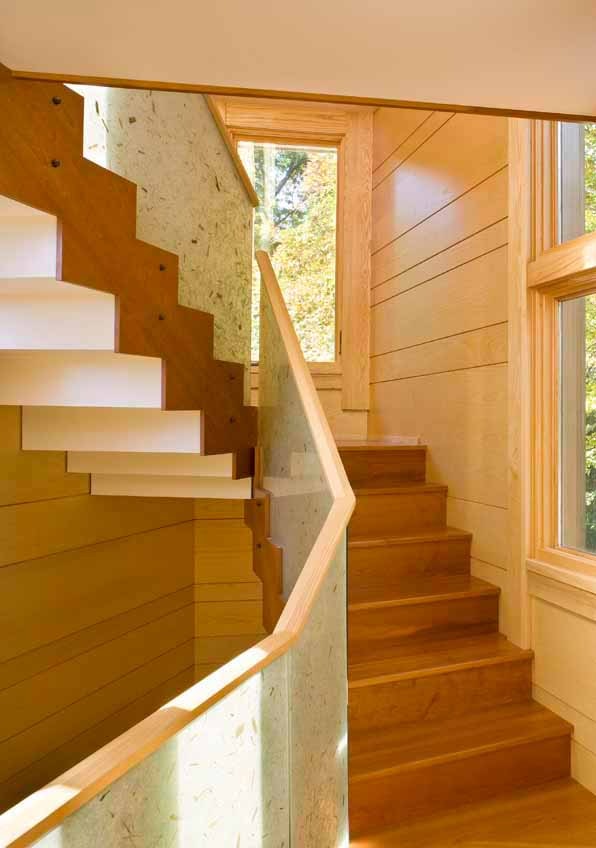 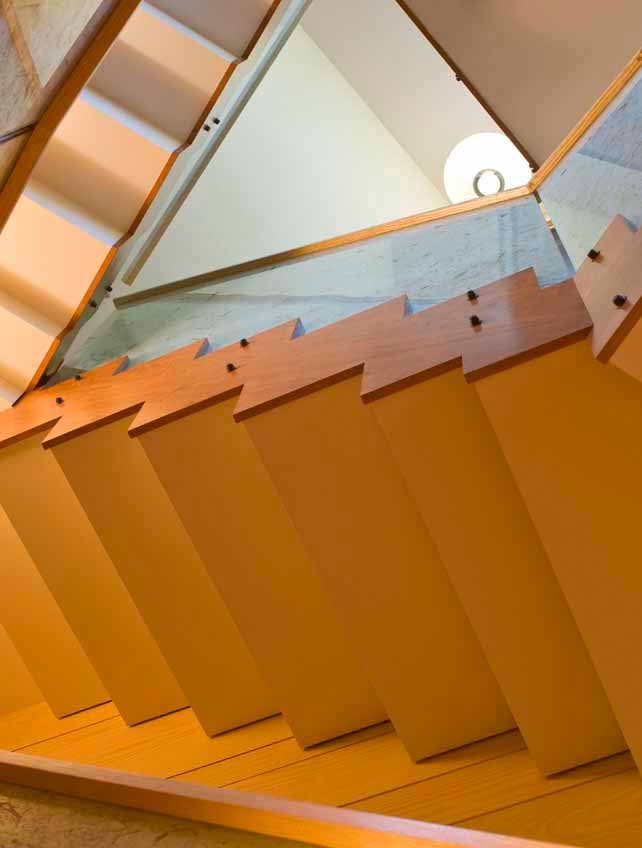 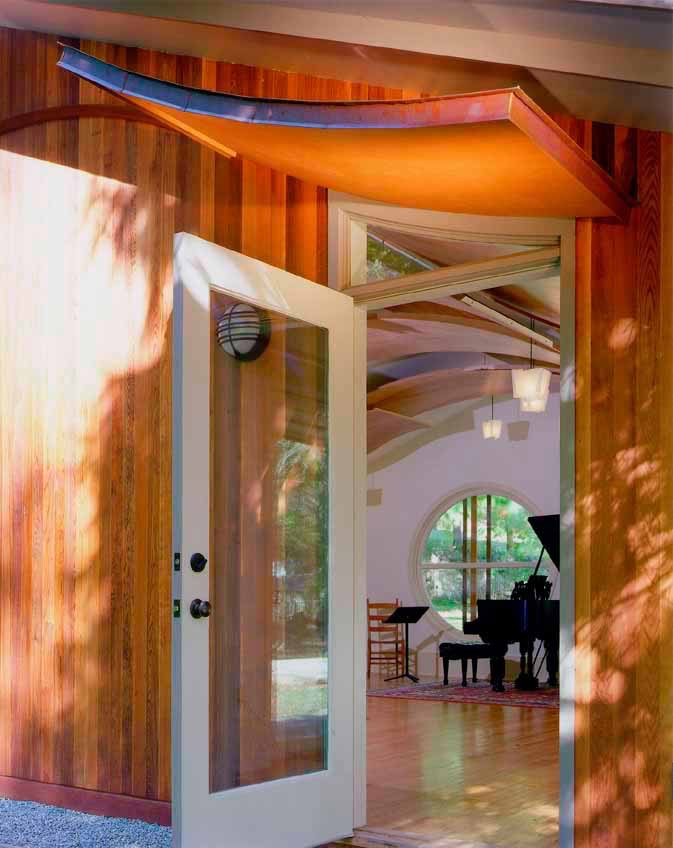 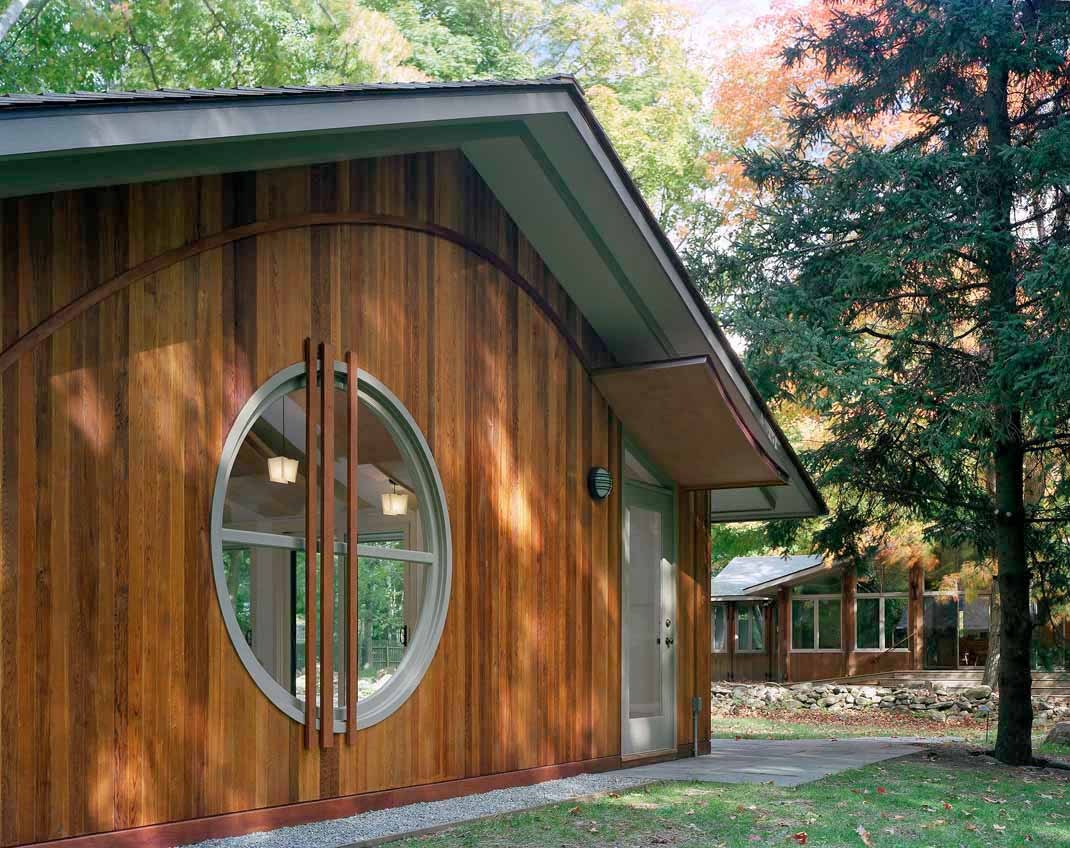 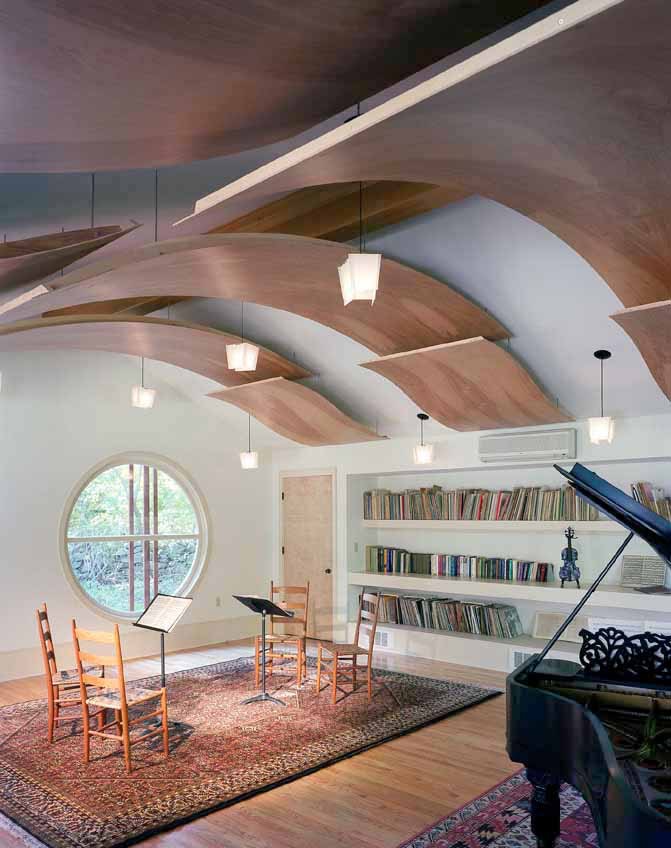 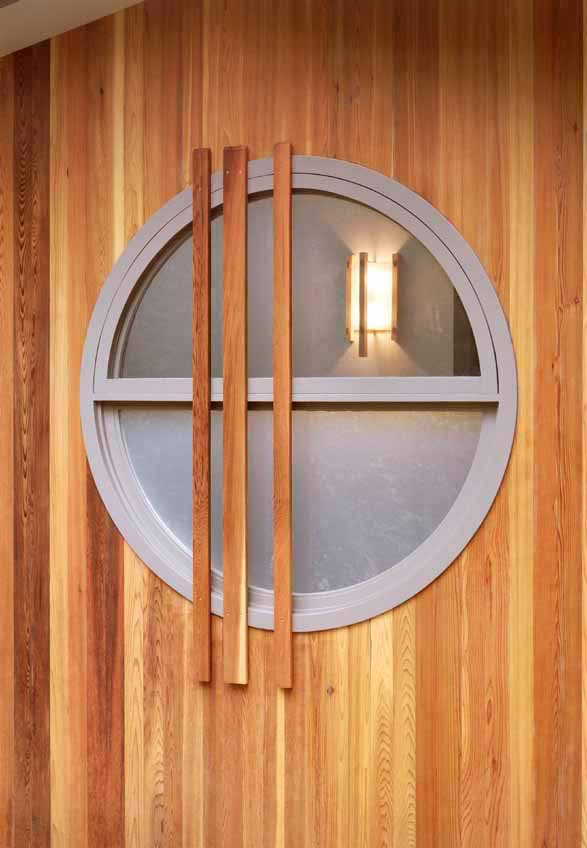