Greenwich Country Day School, a well-established K-9 school in Greenwich, CT, made the transformative decision to develop a whole new 9-12 high school on a separate campus. The new campus was remote from its existing K-9 campus and had been occupied by another middle school. The new high school would thus require two major additions to the pre-existing, non-descript building. The School emphasized three core pedagogical goals we believed a new building was uniquely capable of providing: a “concourse” of interconnectivity between a variety of interests and disciplines; an ambience of “sociability” to fulfill the need for a sense of community; and a “stamp of strangeness” to encourage questioning and independent thinking. 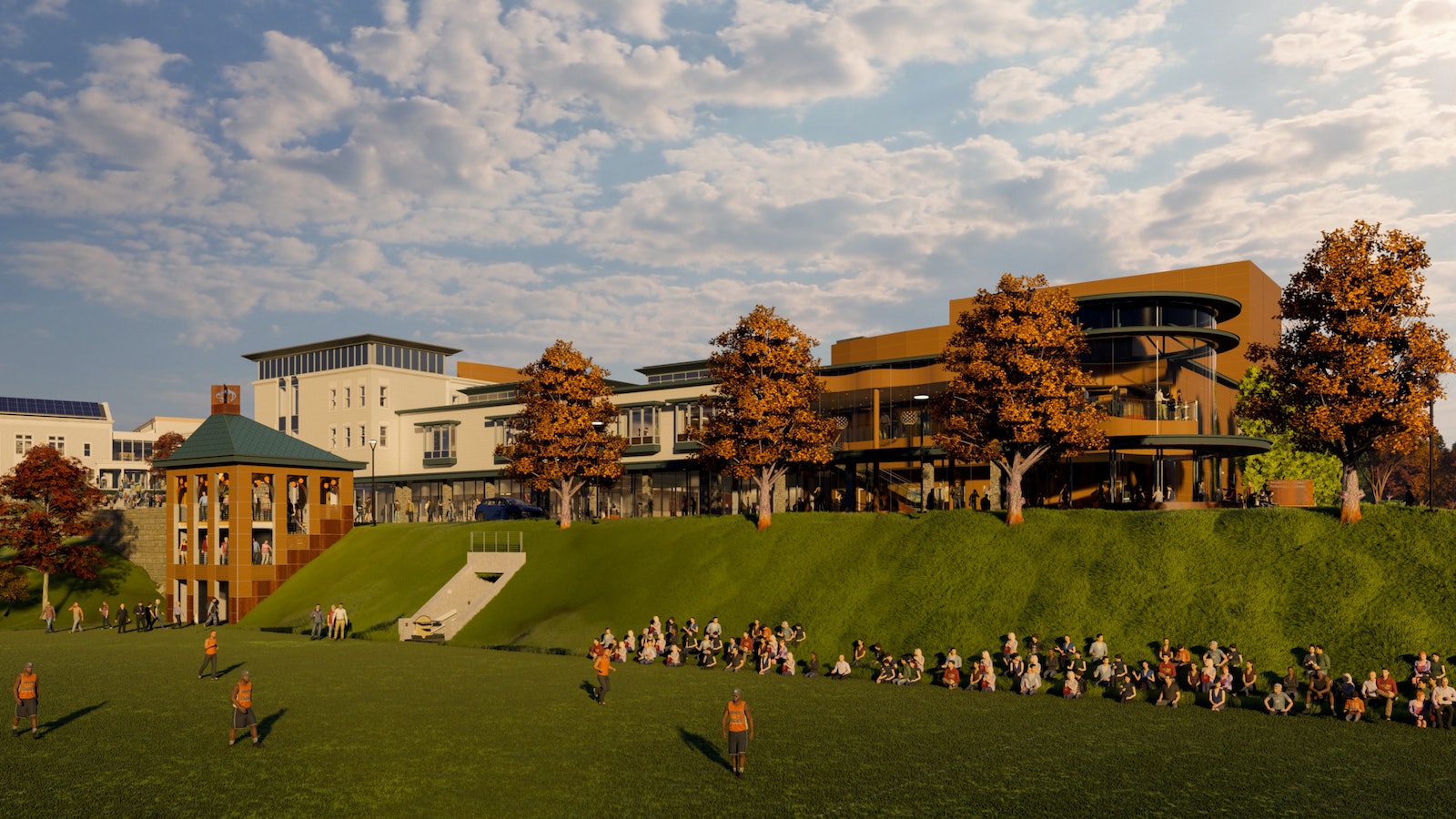 For the “concourse,” we fashioned the main hallway after a “village street” along which we arranged a variety of classrooms, laboratories, music and dance studios, athletic facilities, and a theater. We saw these as “retail shops of learning,” and we put them on full display to passersby. We then added numerous small “sidewalk cafés,” or team study areas, along the way to both stimulate and facilitate the exchange of ideas. And, we added landmarks for intrigue and wayfinding. Our “village street,” being on multiple levels, needed alluring ways to connect vertically, both physically and visually. Our sweeping “physics stair,” painted orange and crowned with an electrified plasma-ball, is our most iconic connector and memorable landmark. The Visual Arts Village at the north end of campus further extends the “village street” to an outdoor, covered arcade that winds its way around a sun-filled, landscaped courtyard. The sinuous arcade will link four freestanding pavilions housing different visual-art disciplines. The Arts Village’s enchanting ambience will, we believe, draw students from the southern end of the campus, where the sciences, humanities, athletics, and performing arts are housed, into the world of the visual arts at the northern end. 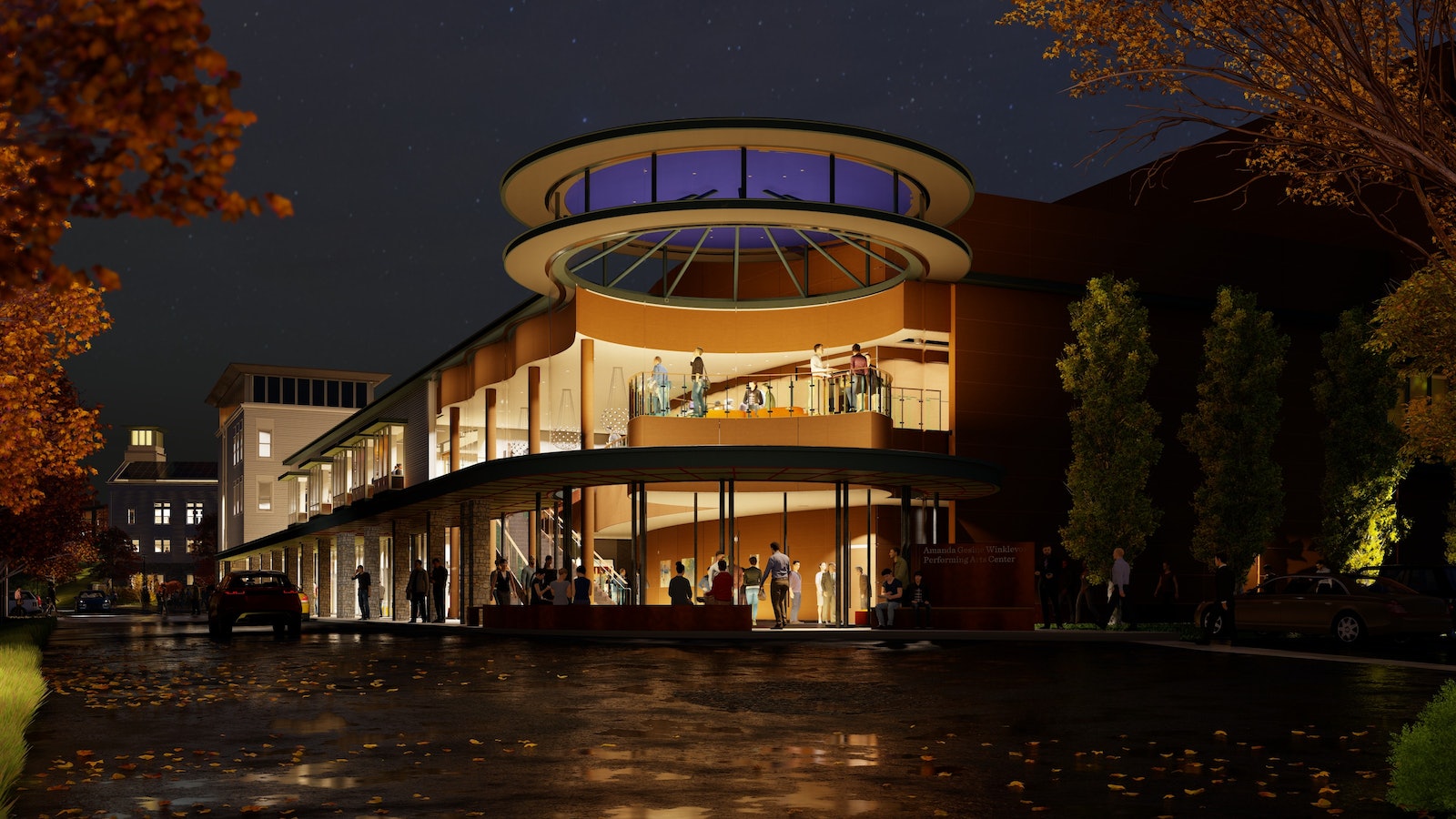 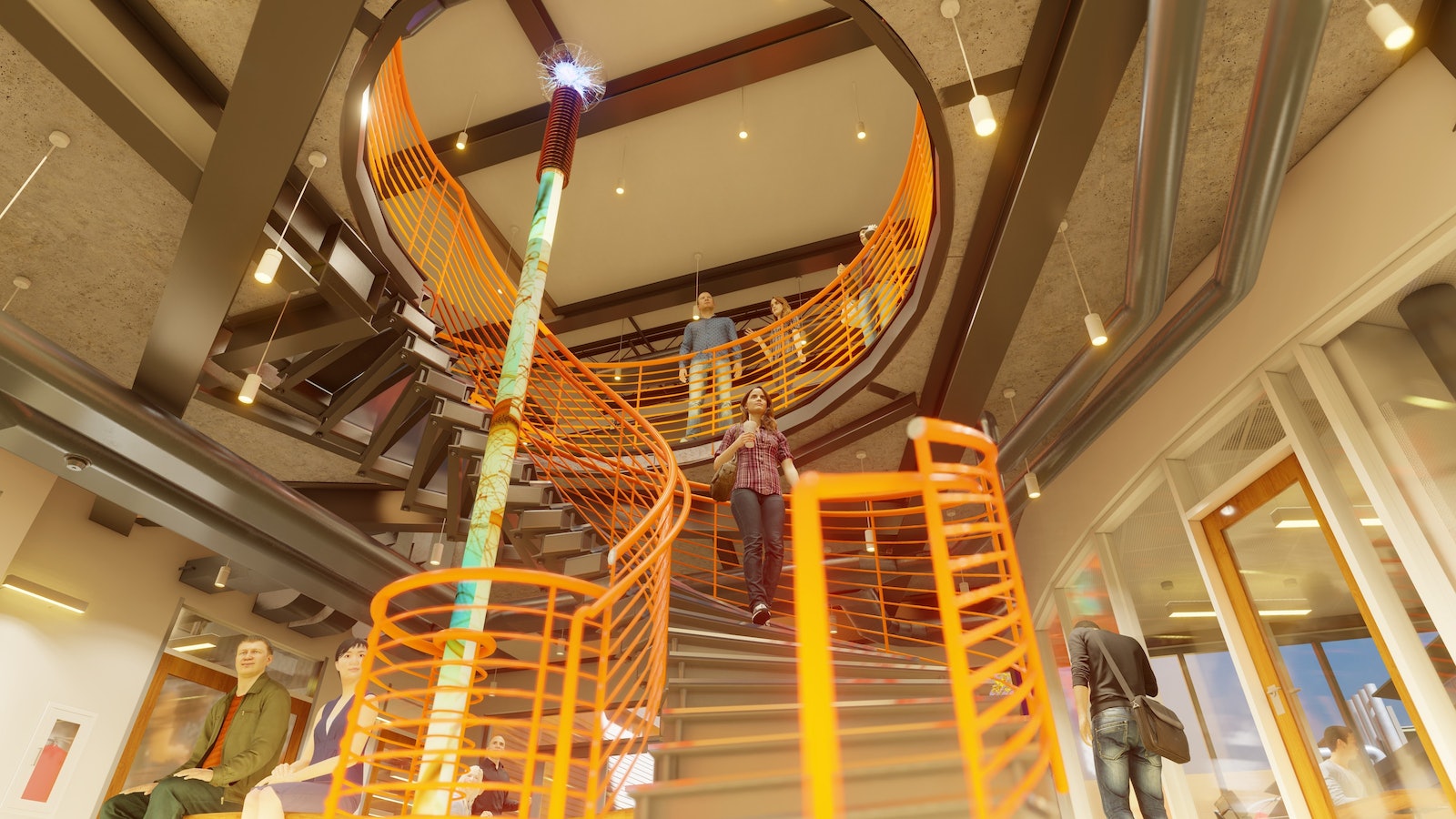 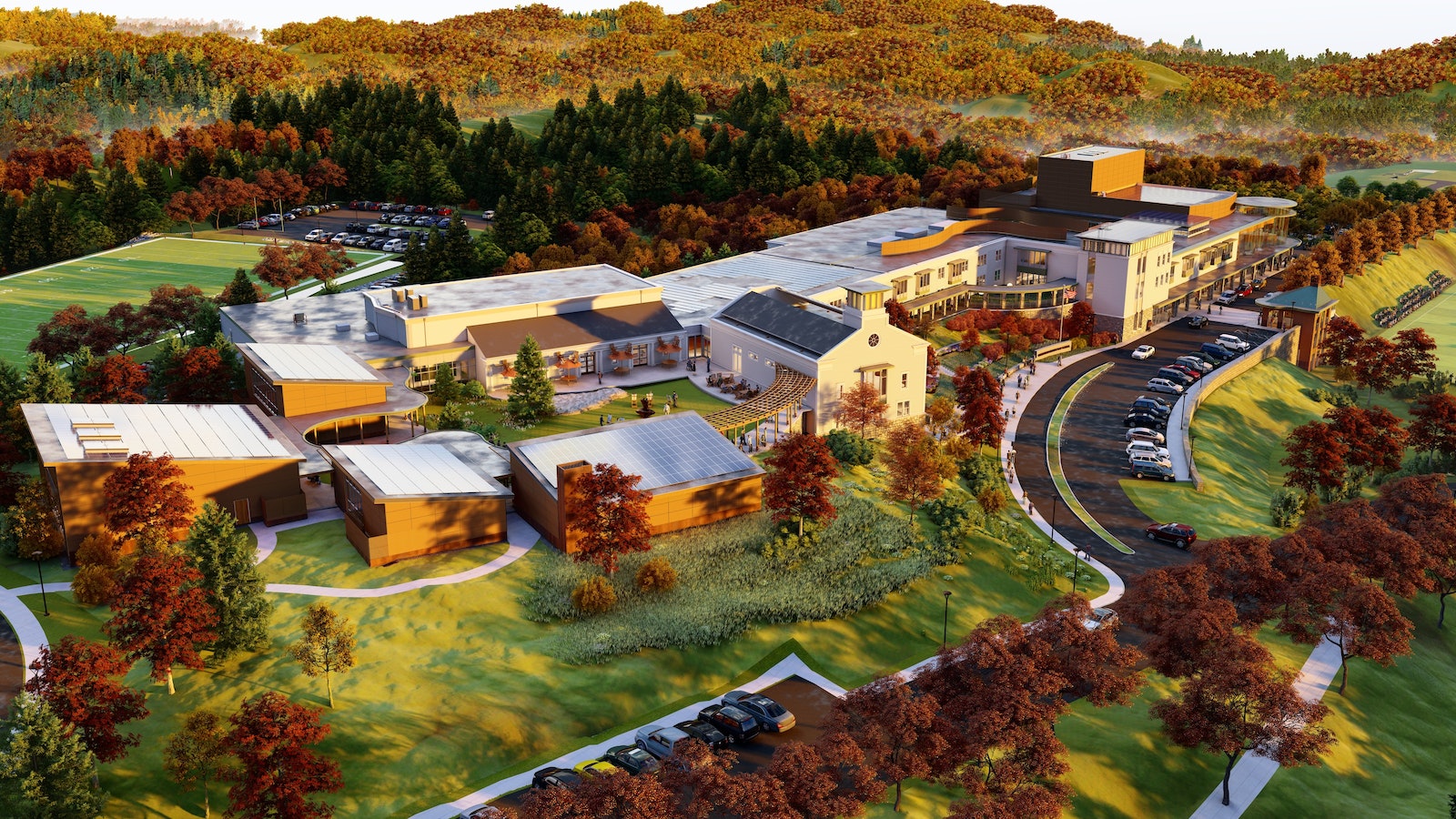 Since “sociability” is at the heart of a sense of community, we wanted to give the building many places for students to sit and interact. We built roomy benches for gathering, undulating them in ways that we felt would promote personal interaction. We also placed them in “saddle-bag” bay-windows and alcoves right on the edge of our “village street” so students can sit and watch the world go by, or be seen by passersby, or simply find a quiet eddy out of the flow. A drinking fountain at the center of a “U”-shaped seating alcove, flanked by the Dance Studio and Fitness Center, works as a sort of “town well” at a place of gathering where people are likely to be thirsty. The future Visual Arts Village will also have the allure of outdoor seating basked in sunshine and shielded from the north winds. Last, we introduced interior glass walls throughout to reveal the beehive of people at work and play. We wanted students to depart each day having formed a vivid mental image of a vibrant community. 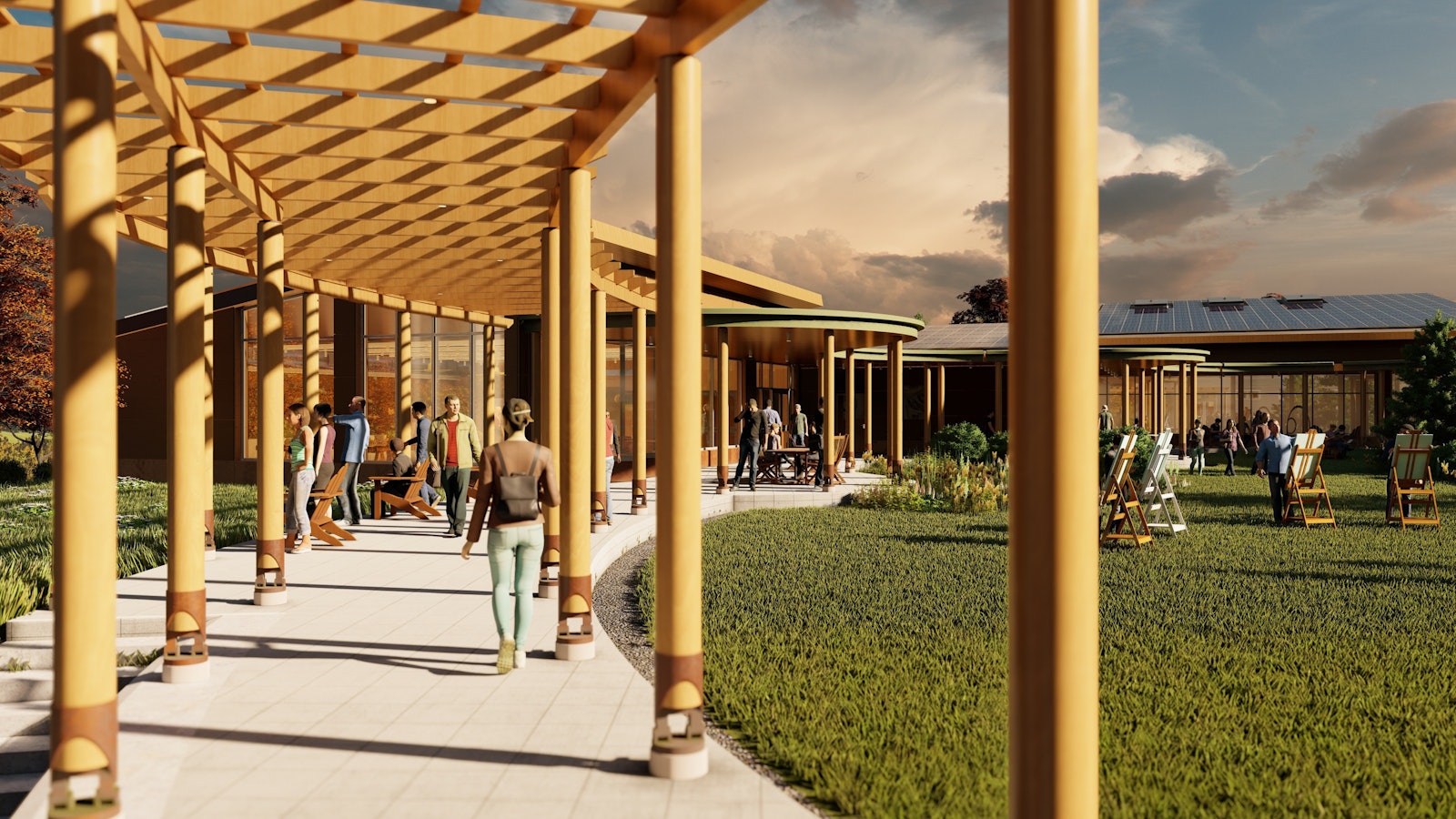 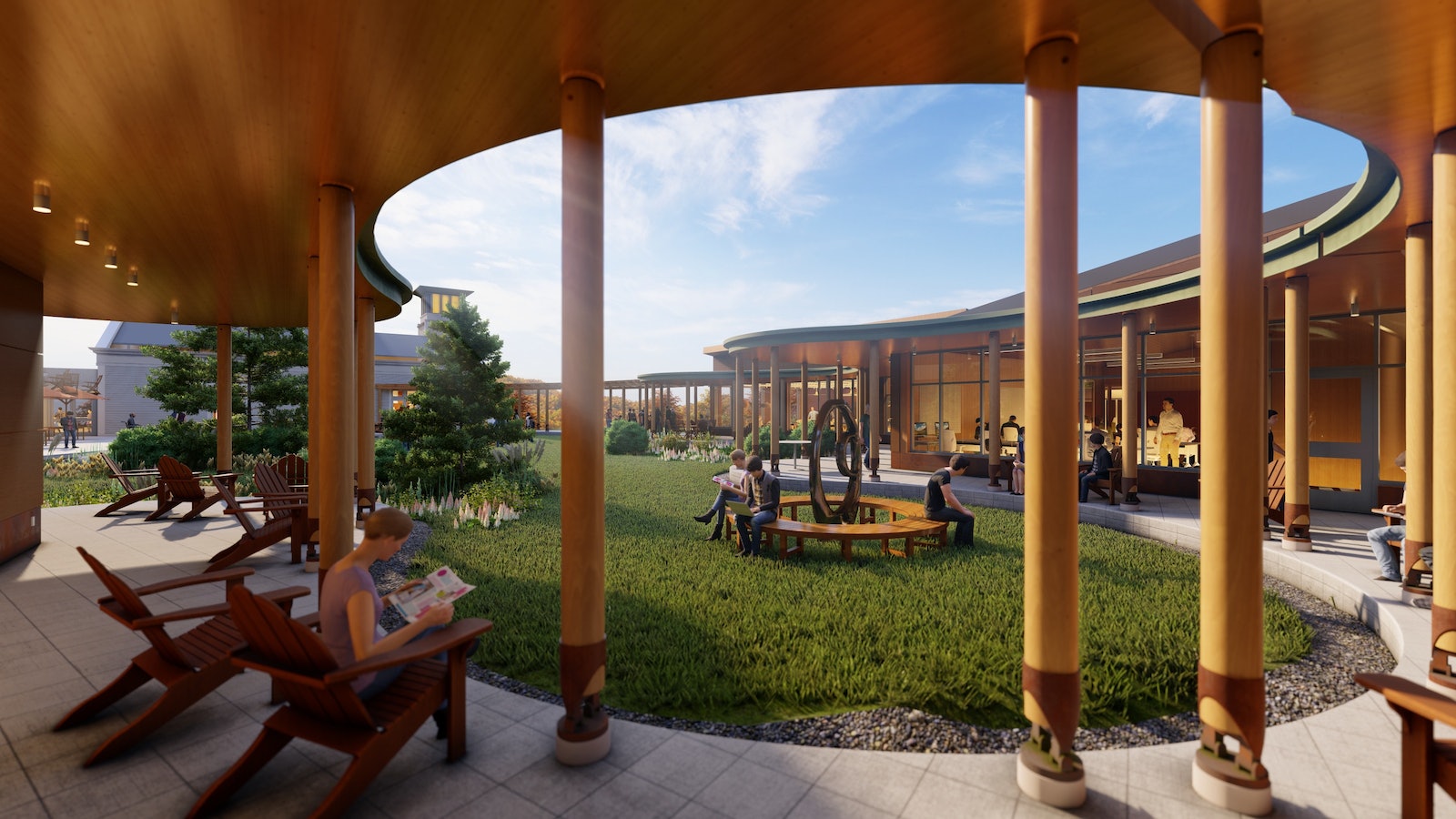 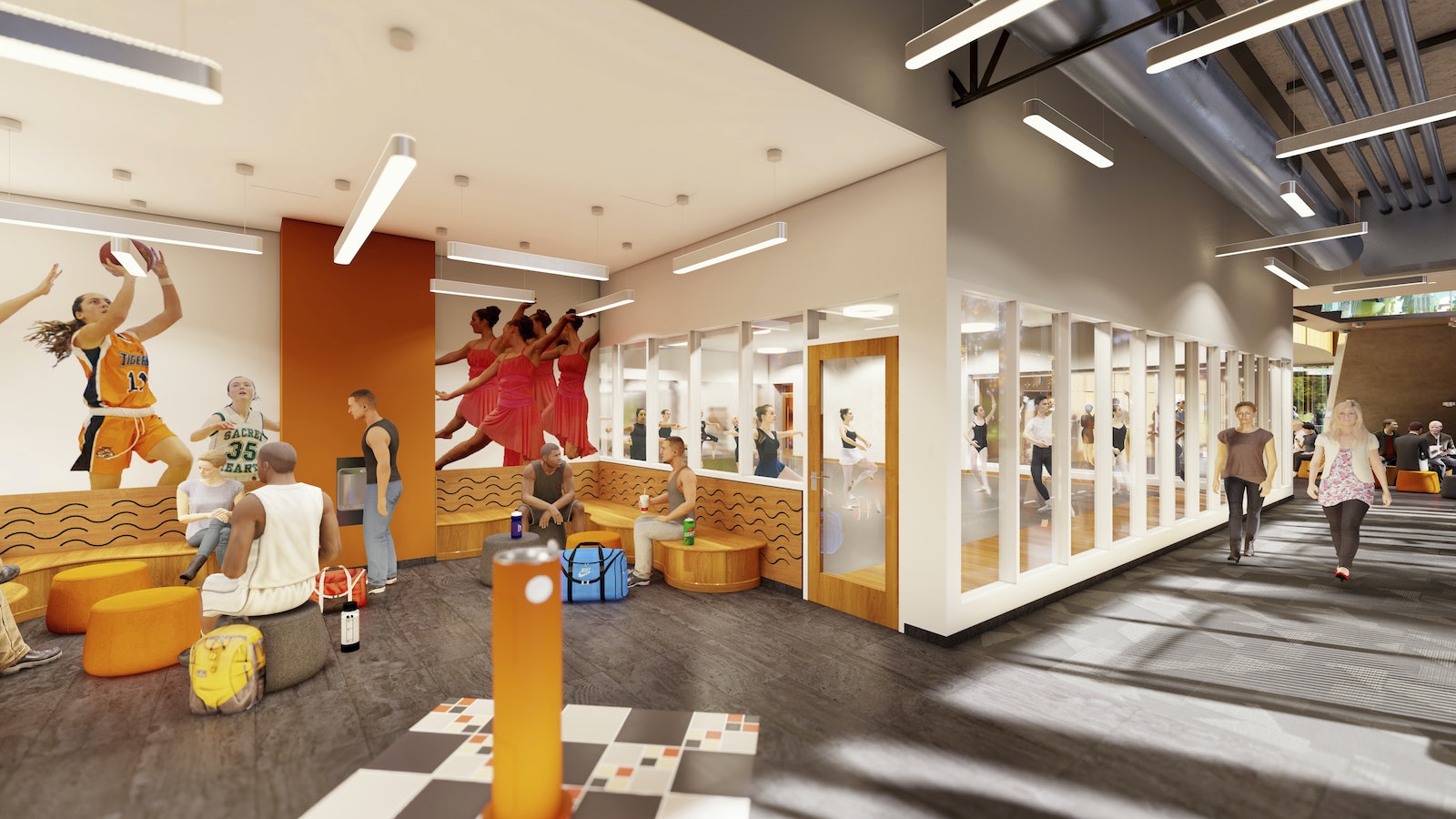 Giving a building a “stamp of strangeness” is not, we felt, about making things simply look unfamiliar. We wanted there to be a sense of wonder. We did this by exposing steel beams, ductwork, electrical conduits, and plumbing pipes throughout. We enclosed the music rehearsal studios with accordion-configured glass walls. We added a plasma ball atop the sweeping “physics stair.” The spiral stair itself hangs mysteriously in mid-air only by glass and steel treads bolted one to the other. We festooned the exterior Stair Tower with steel “branches” bearing bright orange “berries.” We made the “out-of-the box” room so it could, at times, seem to disappear. The daringly cantilevered, all-glass, cylindrical main entrance to the Winklevoss Performing Arts Center will have a heavy dose of strangeness. So, too, will its curving steel benches out front at curbside that we designed in-lieu of bollards standardly used to barricade wayward cars. The immediate questions these strange things beg are “What is that thing?” or “How does it work?” However, the ultimate question we hope to elicit is “Why?” – “Why is that thing the way it is?” and “Why not something else?” We believe wonder is an important state of mind. By questioning things and seeing some of them as merely arbitrary, a student begins to think independently. A building with a stamp of strangeness can nudge students into a habit of asking not just “What?” or “How?” but importantly, “Why and why not?”

“Faculty and staff are thoroughly enjoying the new buildings…the design aligns seamlessly with our academic and co-curricular program. We are grateful to be able to learn and work in this energizing environment.” Chris Winters, Head of Upper School