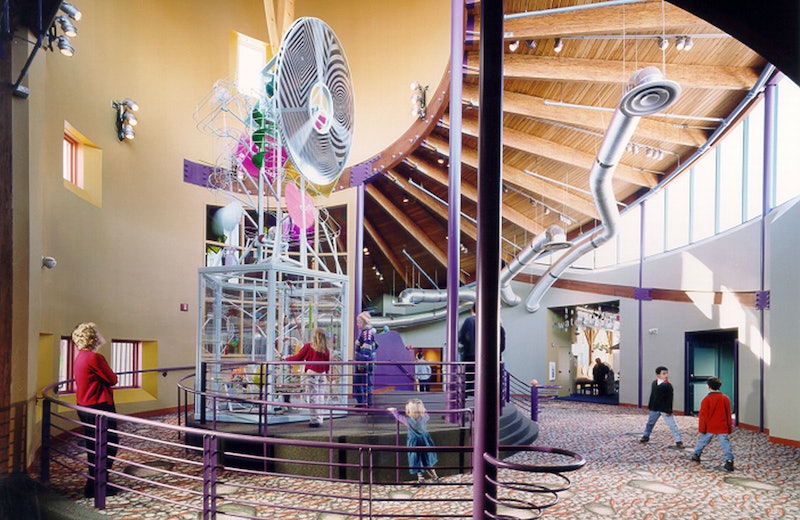 Plan: This museum was designed to encourage wonder and independent inquiry in children ages one to ten. Exhibits of science, culture, and local history are housed in two open shed wings that radiate out from the "Hub," the lobby of the museum. At the epicenter of the Hub's coiled shape is an interactive machine where kids can advance balls of different sizes through a tower of augers, chutes, and trampolines. The tower is positioned to be the most prominent landmark within the museum. Here is where you come when lost. Also, from the platform's heightened vantage point, all of the other offerings of the museum can be viewed. The two wings of the museum partially enclose an outdoor play space. A curving, trellised pergola completes the enclosure and provides a shaded sitting area for observers of kids at play. 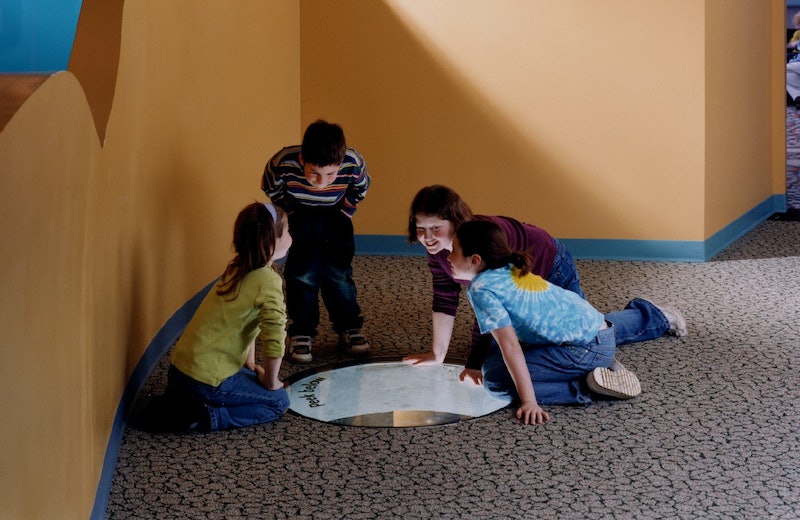 Wonder: The building works as a wonder exhibit itself. It not only exposes how ordinary things work, but also explores how they can work in unordinary ways. The tower becomes a person. Its windows are eyes, ears, and mouth. Its nose a sundial. Its hat a birdcage in which flights of fancy are hatched. The hat is crowned with a "feathervane" in honor of the local folk hero, Yankee Doodle Dandy, who "stuck a feather in his hat and called it macaroni." There is even a macaroni path. The air supply ducts in the Hub are arms of an octopus. Columns are trees. A stone wall becomes the tail of Tyrannosaurus Rex. Rain gutters turn into eyes of a smiling face that weep when it rains. The Hub is a river filled with fish and stepping stones for the kids to hop on. It is an extension of the stepping stone sidewalk outside. There is a hole in the floor where kids can peer into the basement mechanical room. Pipes, ducts, wires, and structural connections are exposed throughout the rest of the building. The back of the theater opens, like an airplane hanger, to transform the outdoor playground into an amphitheater. The building is filled with "S" shapes, in reference to the museum's name, Stepping Stones. Elements such as the exterior columns, finials, fish in the carpet, paths, roof top birds, table legs, weeping eyes, and hand rails all have the letter "S" in their shapes. The challenge is to find them all. 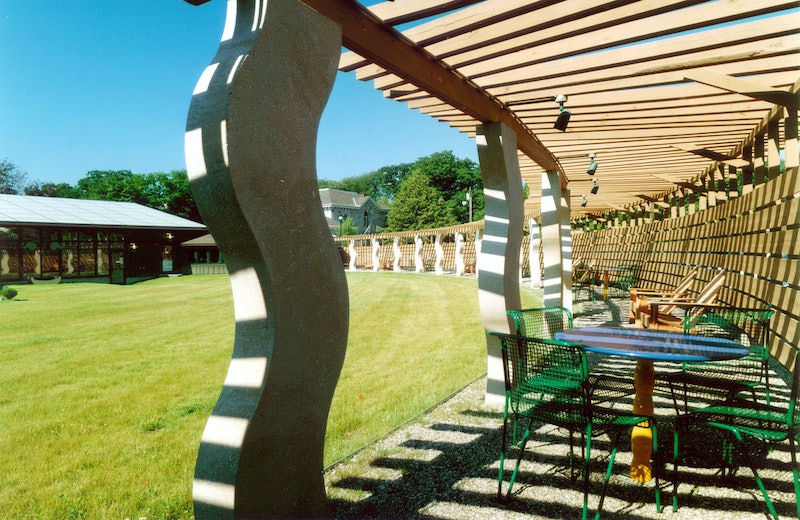 Context: The museum is set in a public park that was once the estate of an industrialist whose stone Victorian mansion is itself on display and whose stone carriage house is a center for art studios and galleries. The wood batten siding of the children's museum and the glass roof of its water gallery wing recall the mansion's barn and greenhouse that once occupied this site. The "dinosaur tail" stone wall links the museum to the stone carriage house of the mansion. A lighthouse in the bus turnaround, suggesting the maritime history of this region, not only provides a portal through which the children pass to enter the museum but also beckons those entering the park by car. The anthropomorphic landmark tower of the museum, lit at night by the lighthouse, draws attention from the nearby interstate highway as it also peers over the theater's roof and, in talismanic form, provides a dramatic backdrop for the stage of the outdoor amphitheater. 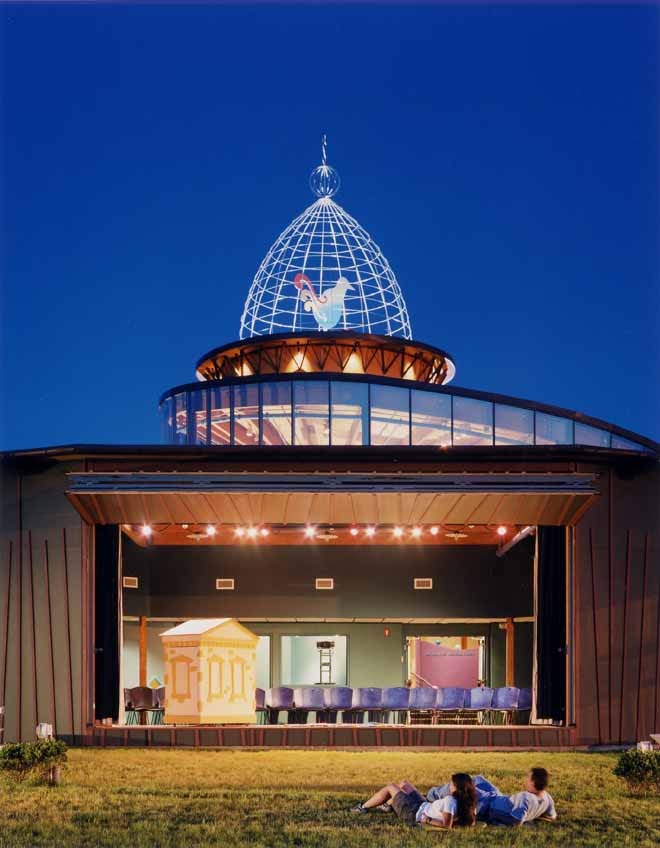 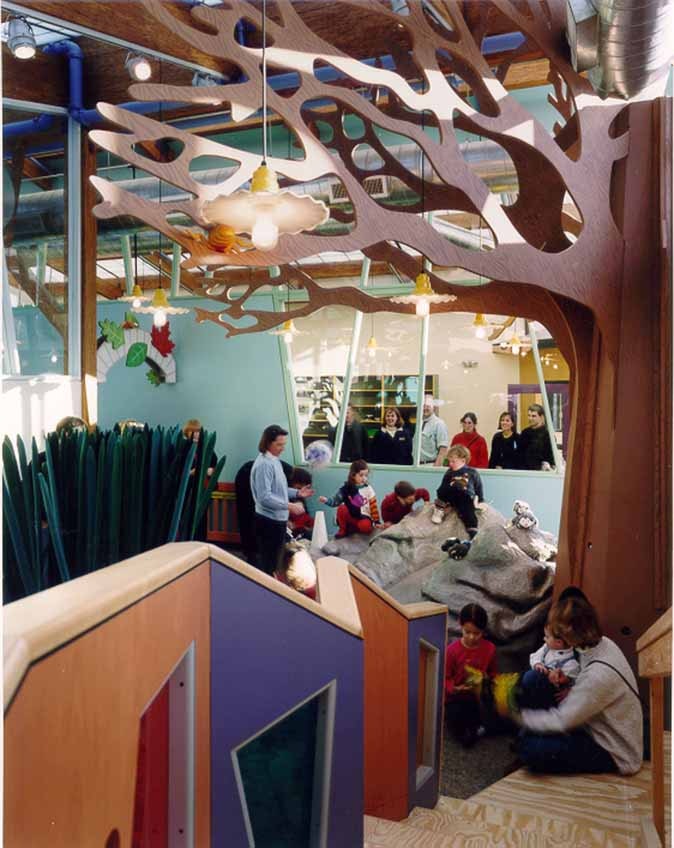 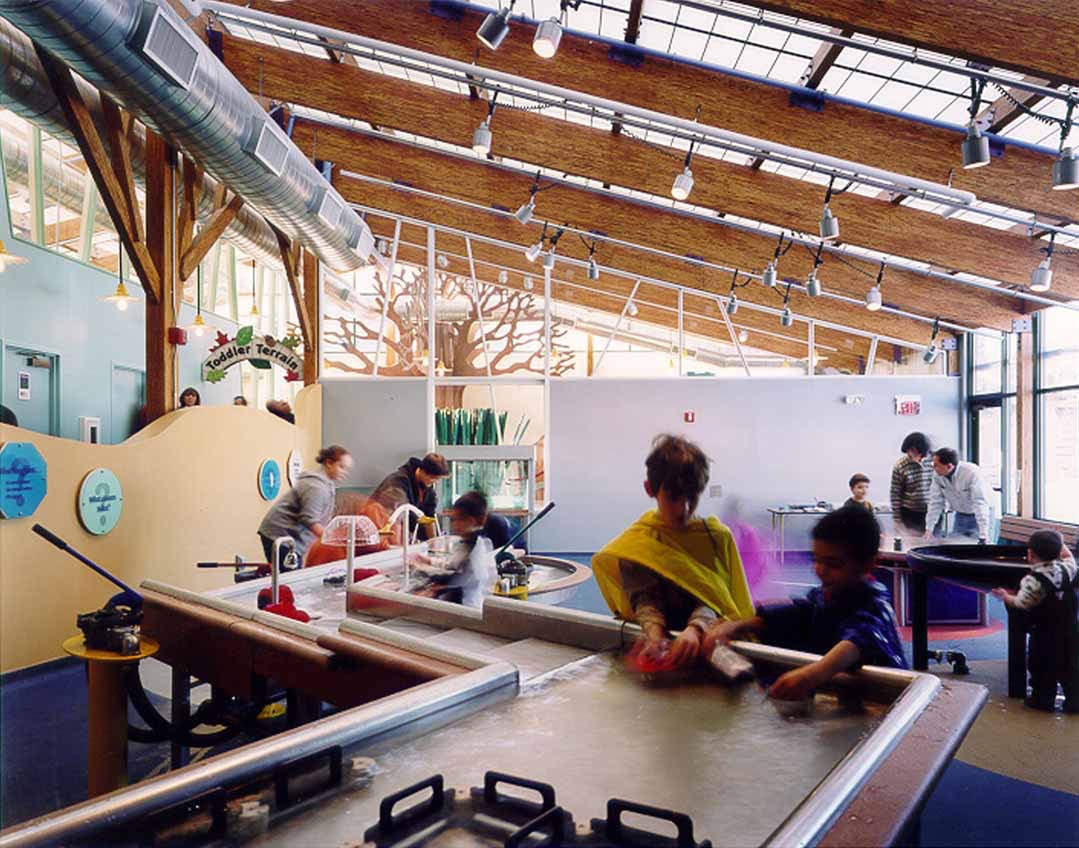 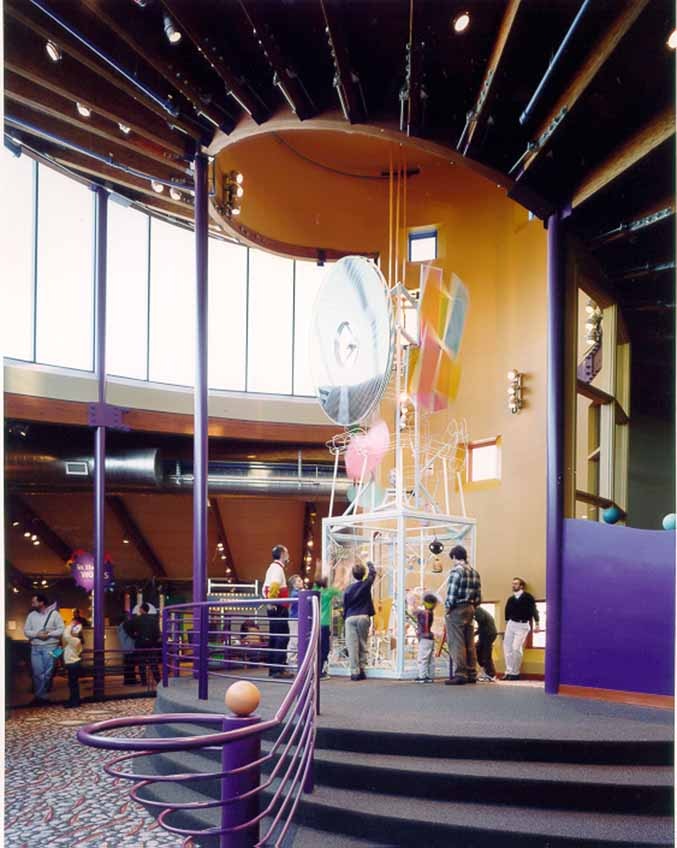 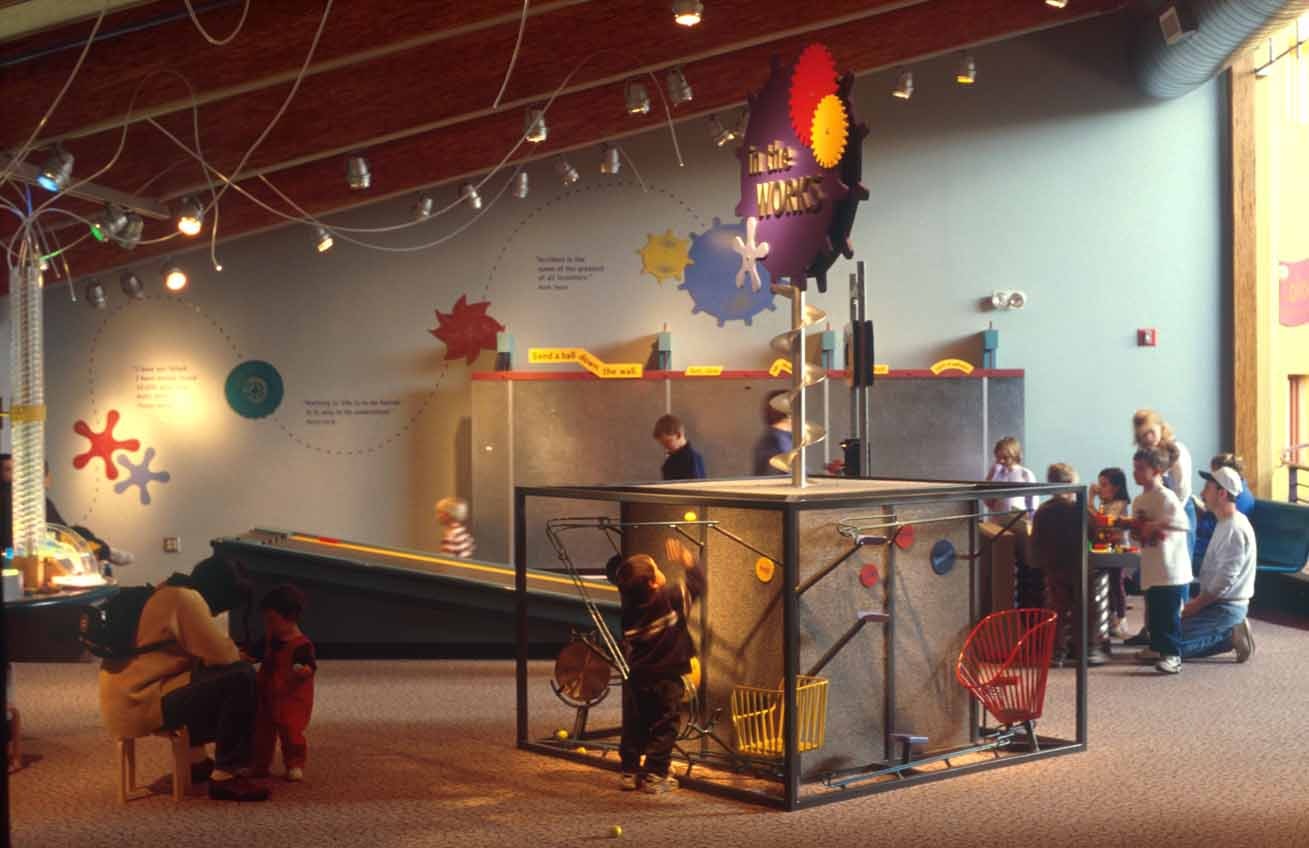 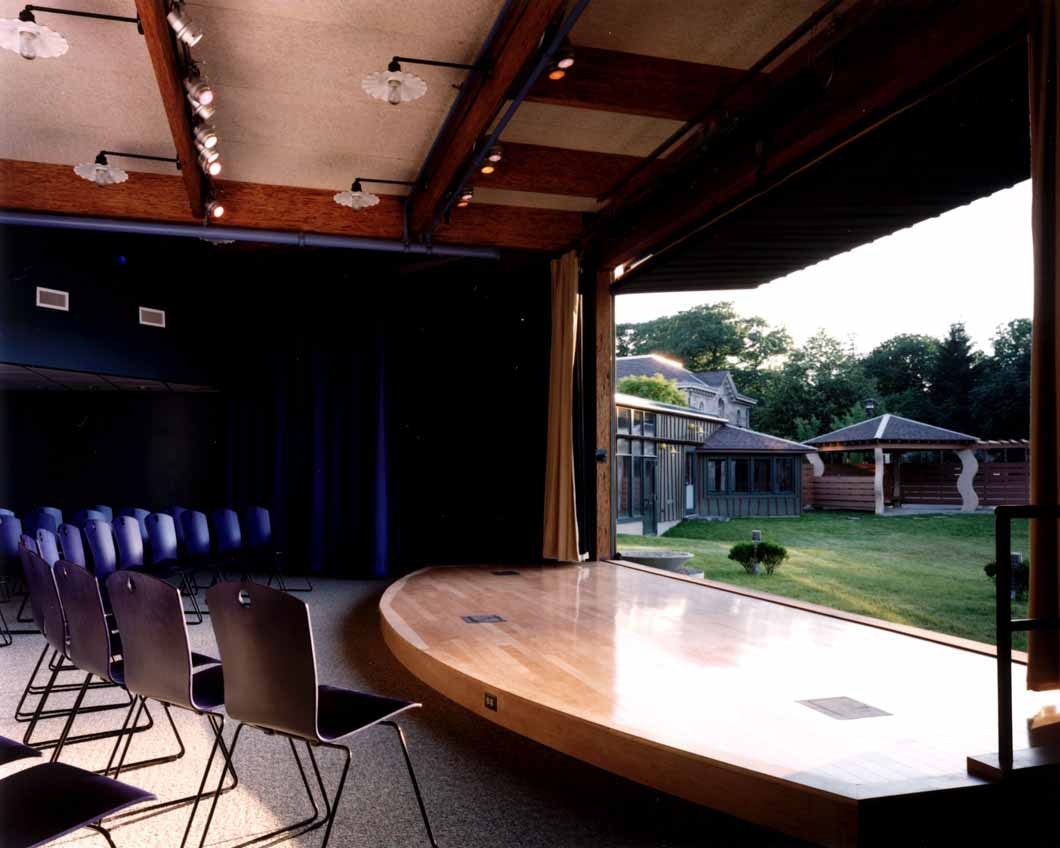 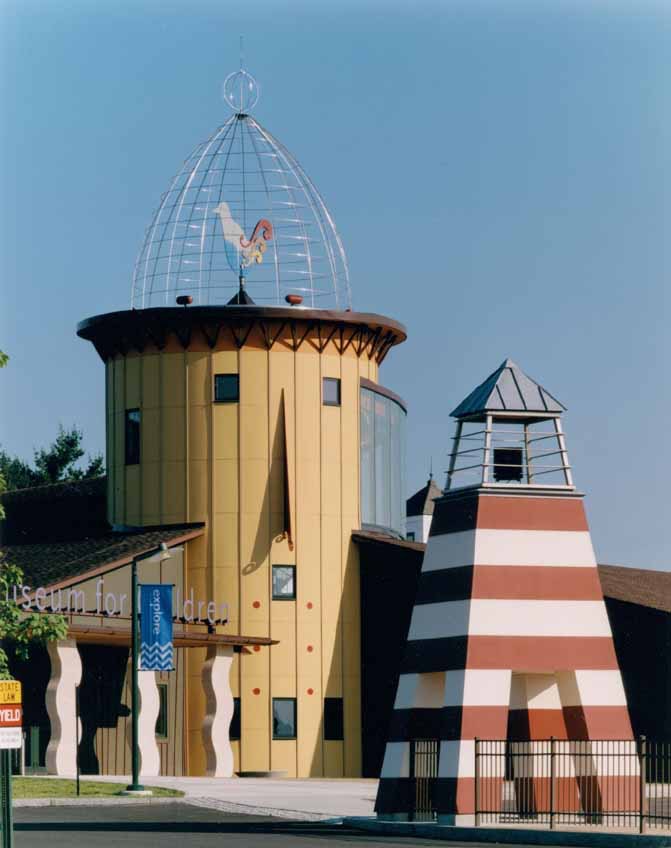 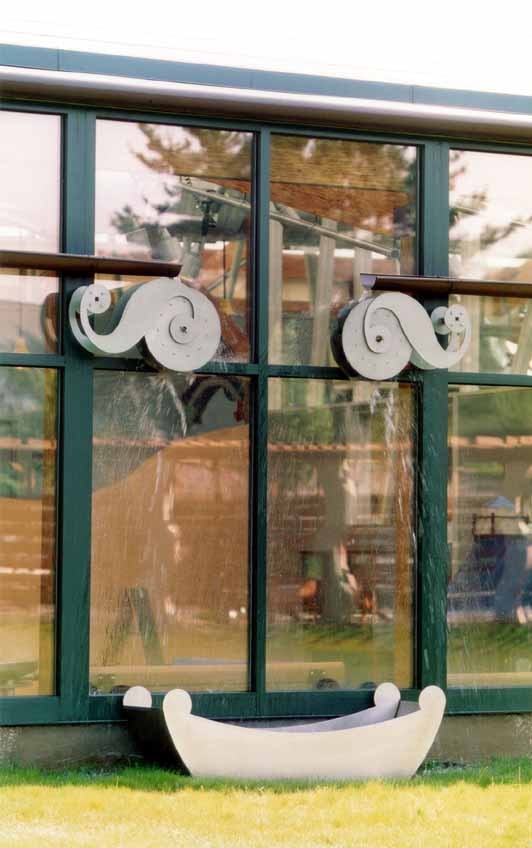 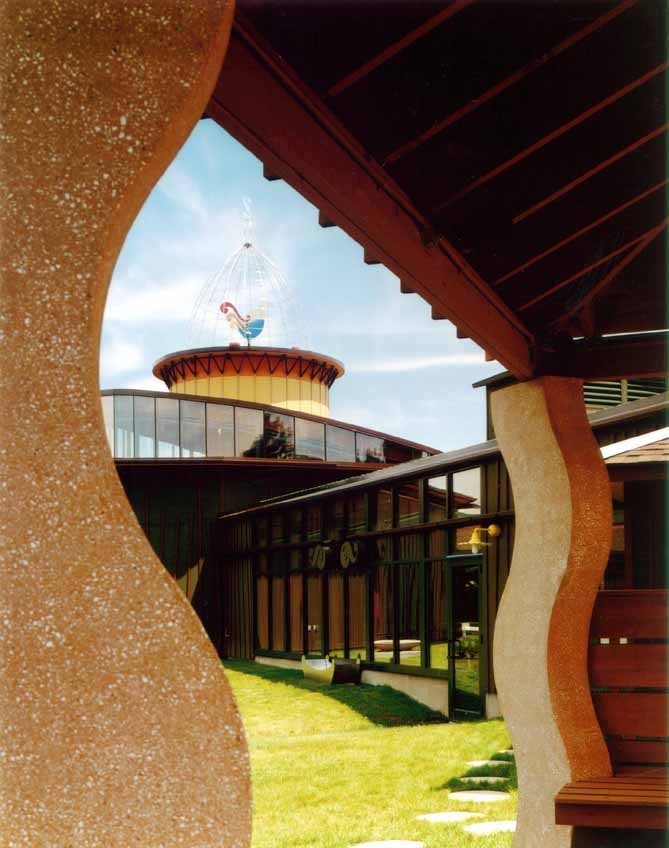