Church Houses were the first places of formal worship for early Christians. They offered not only a place for worship, but also a place of hospitality for sojourners from out of town. This concept was deemed appropriate for the world headquarters of the United Church of Christ as it relocated from New York City to a nine-story, turn-of-the-century office building in downtown Cleveland.

Once the Church had settled into their administrative offices in the existing building, the architects were asked to design a new hotel, meeting house, and chapel to complete the concept of Church House. 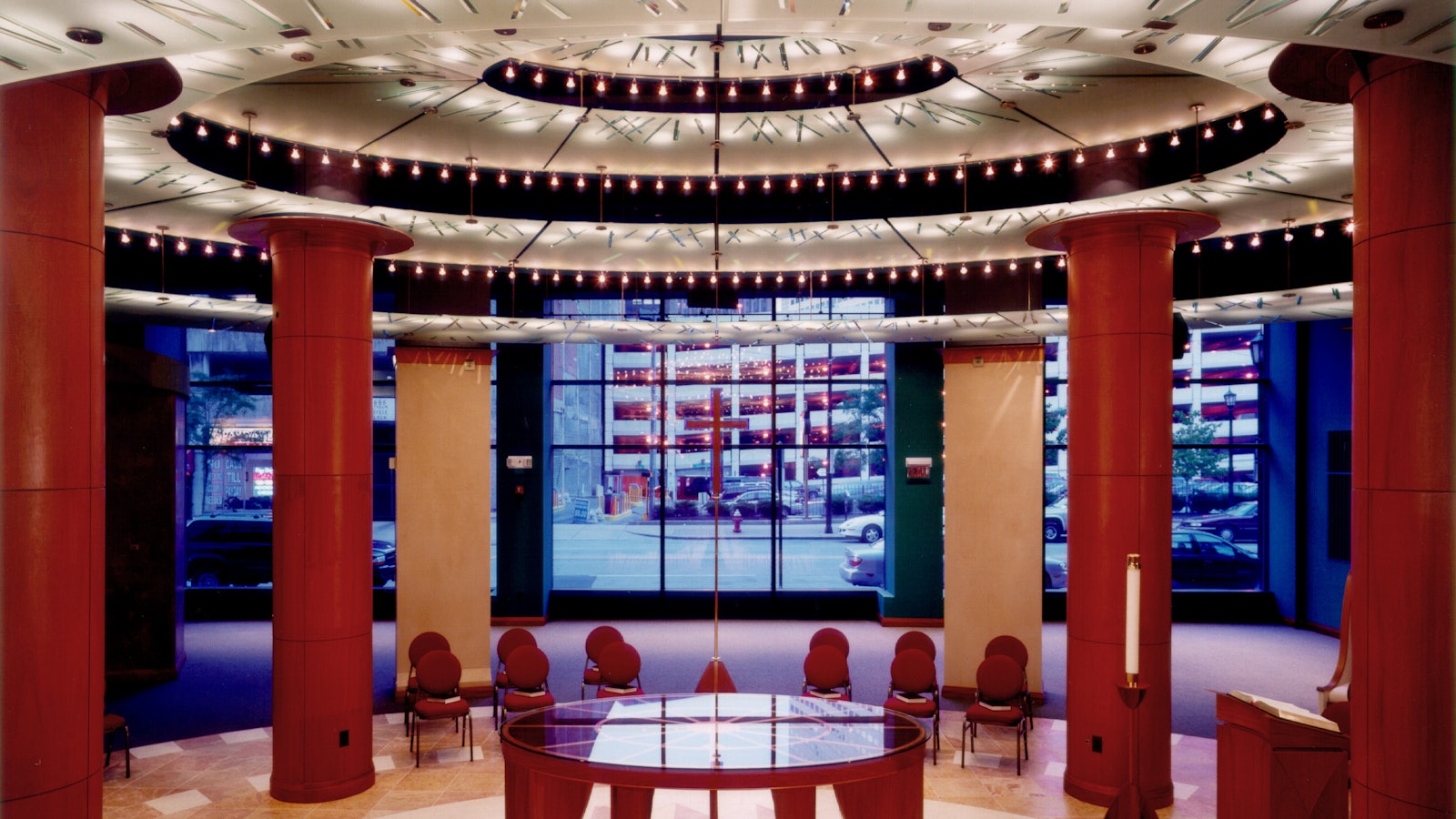 The existing building occupied the north half of the site bounded by Prospect Avenue. The south half of the site, on which the hotel would be built, was a parking lot bounded by Huron Street with abutters to the east and west. The chapel would occupy a renovated portion of the ground floor of the existing building. Connecting the two would be the new Meeting House and an outdoor garden and fountain. During construction, the abutting building to the west was purchased and joined to the hotel.

The Radisson Hotel at Gateway is a full service public hotel with special arrangements for members of the United Church of Christ arriving from around the world. It has 142 rooms with 215 beds and the full range of meeting rooms, conference rooms, banquet rooms, and restaurants.

The Meeting House, with its New England Congregationalist spire, overlooks the garden and provides the Church with a large gathering space and the hotel with an additional conference room. 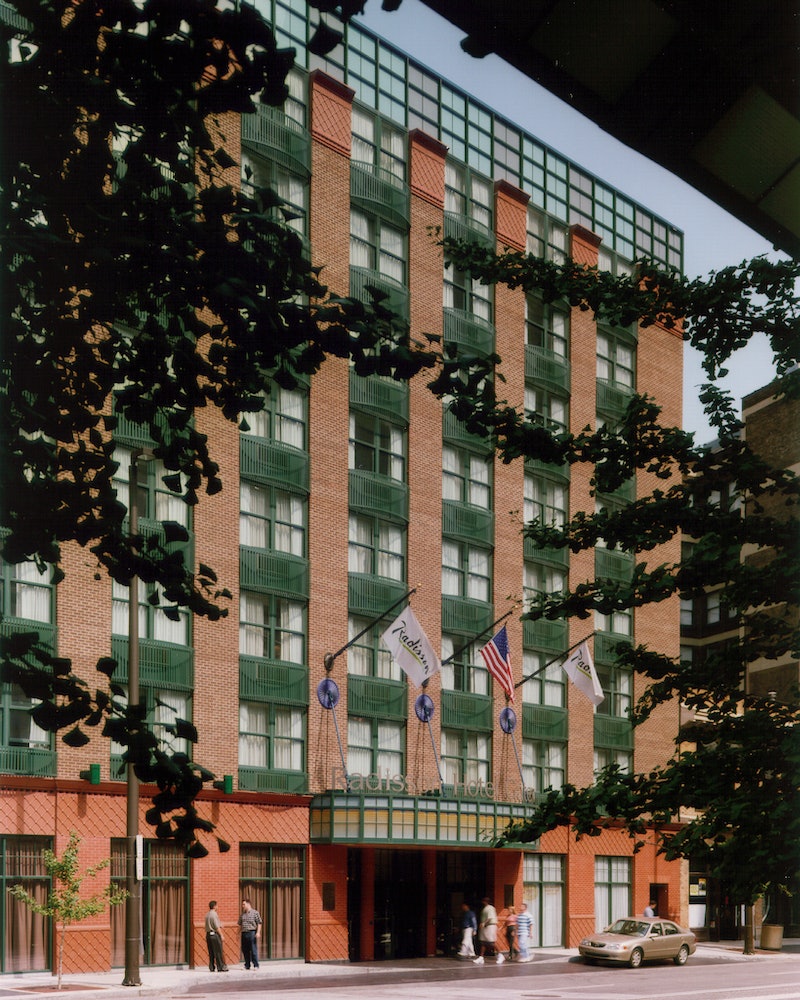 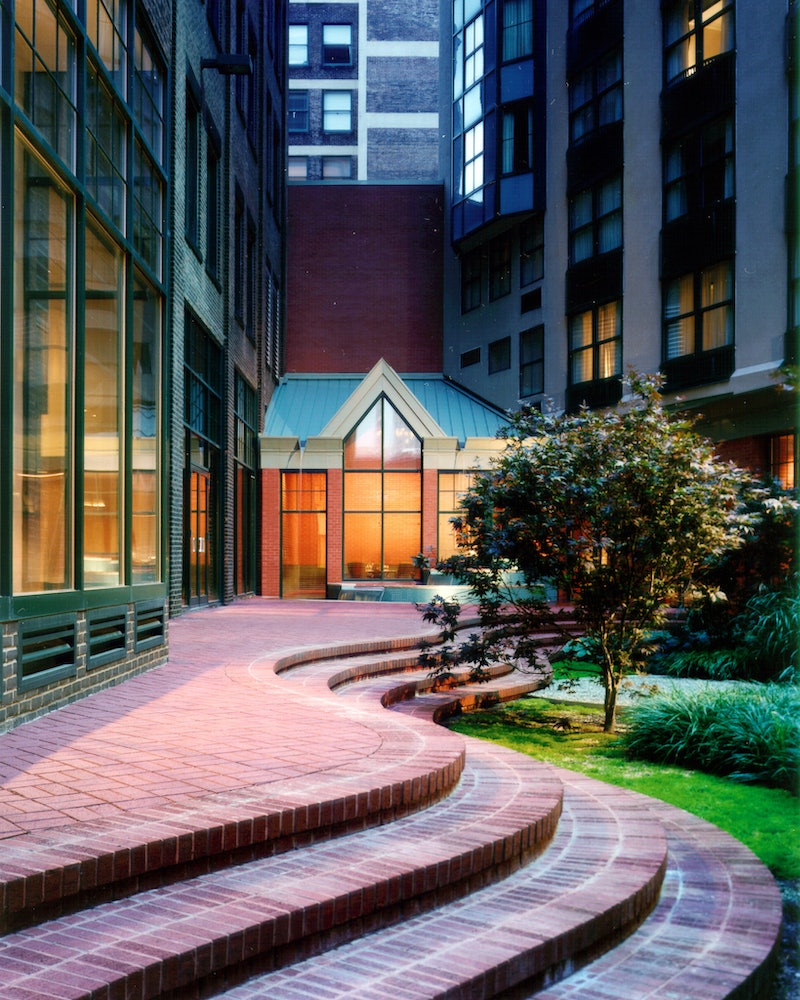 The Amistad Chapel occupies a pre-existing two-story space cleared of its original mezzanine level. Existing masonry walls (circa 1960), facing both Prospect Avenue and the new garden court, were also removed and replaced with glass storefronts that restored the original turn-of-the-century street facade. The existing column grid of the old building had to be maintained for structural concerns and incorporated into the oval. The life of the city outside and the life of the congregation within were thus joined together, fulfilling the major liturgical goal of the worship space. A public exhibit space surrounds the chapel to further this goal of integration.

Layers of allure lead from the familiar to the transcendent through the use of symbol. The chapel took the shape of an oval, reinforcing the sense of a community in congregation and recalling the history of earlier Christian chapels designed by the likes of Boromini and Bernini. 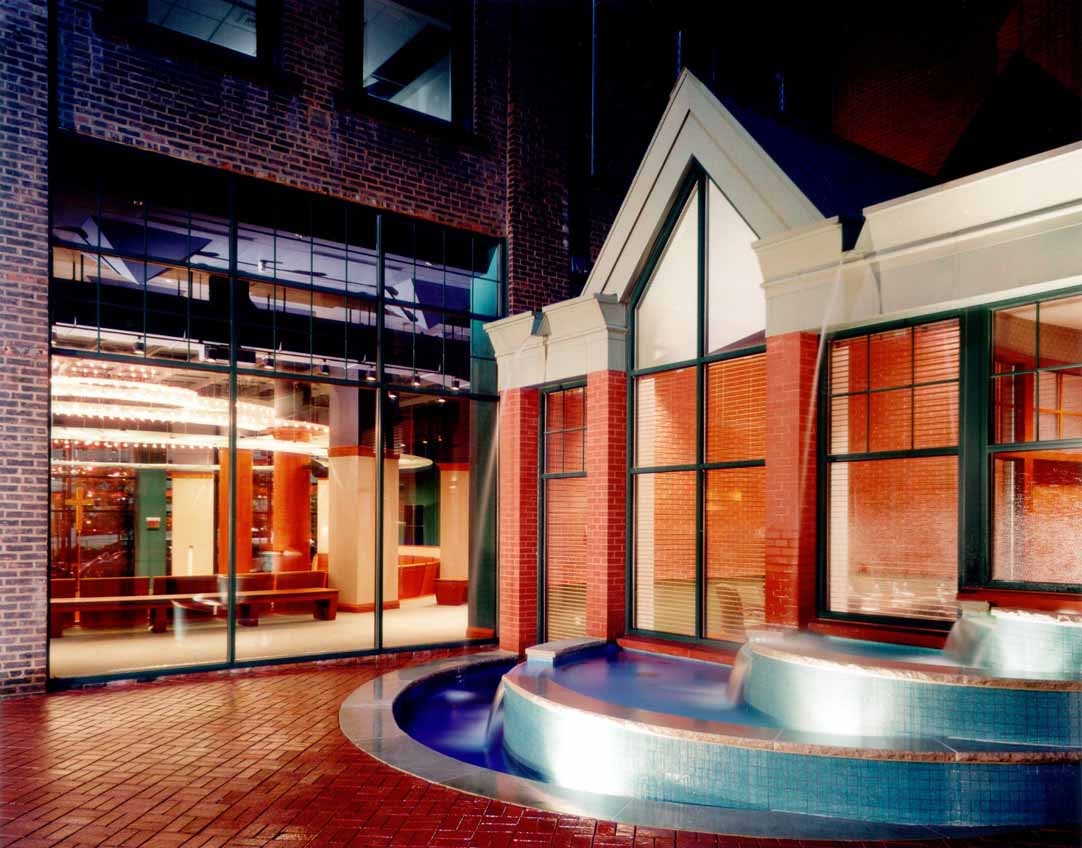 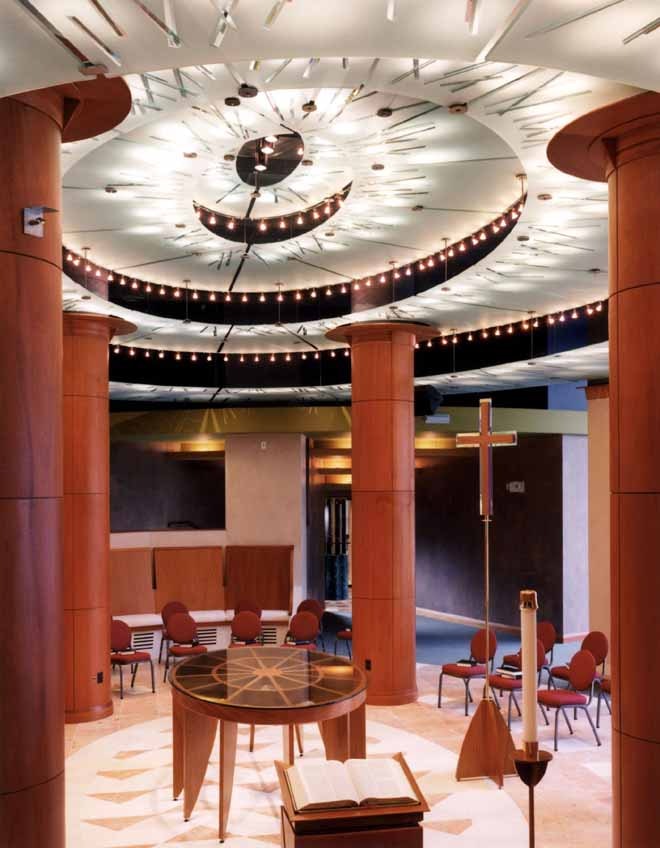 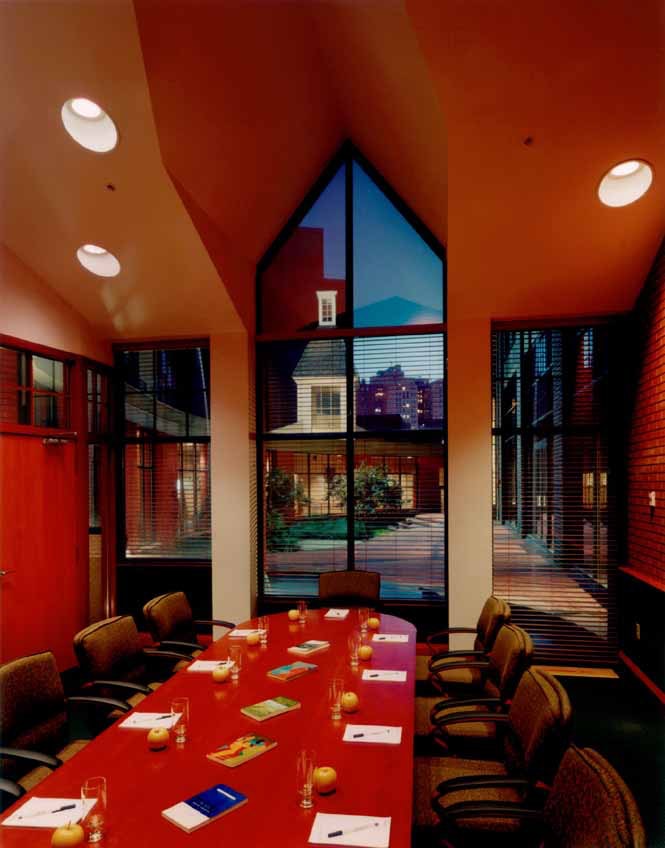 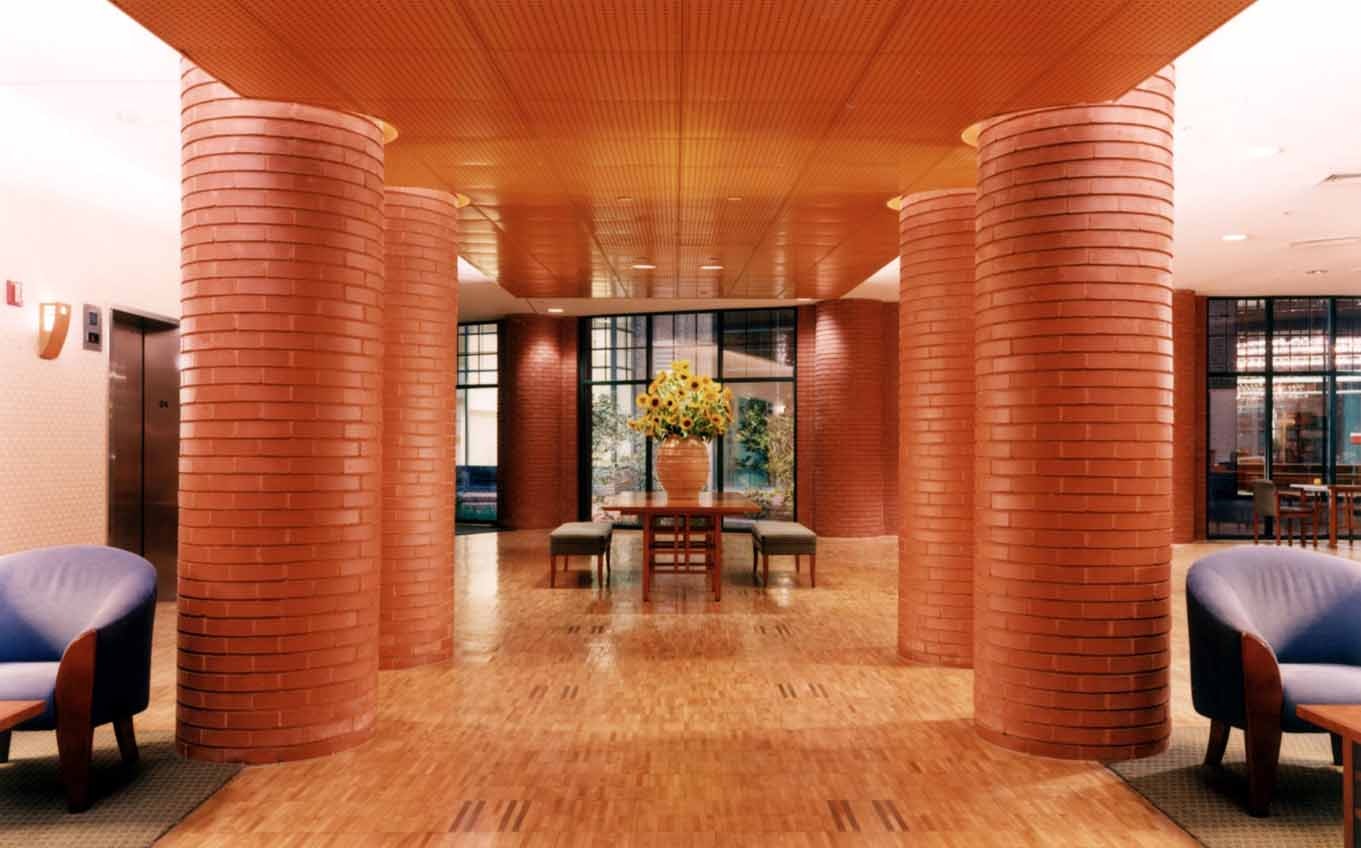 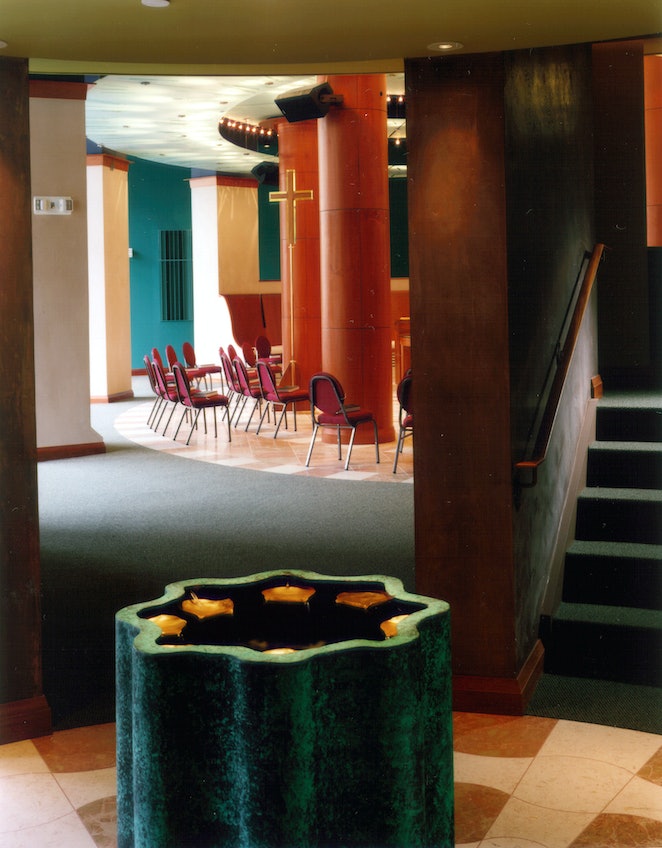 An illuminated glass ceiling, garlanded with dichroaic crystal prisms, bathes the Jerusalem stone floor in multi-colored light. The prisms are arranged to recall the crown of thorns so that the entire lit ceiling suggests both the joy and the sorrow of Christ. Light from the ceiling passes through the communion table, whose top is made of glass, onto the stone floor, patterned in broken squares that represent the human condition. The table, lectern, and cross are made of the same wood used to build the slave ship Amistad, for which the chapel was named. In the narthex, light is symbolically brought down to earth and spread out between radiating walls to the rest of the world. Cascading water in the garden fountain flows symbolically into the chapel where a hammered copper baptismal font, ringed with gilt pads, stands at the center of the narthex's sunburst Jerusalem stone floor.

A Farewell to Church House and Amistad Chapel